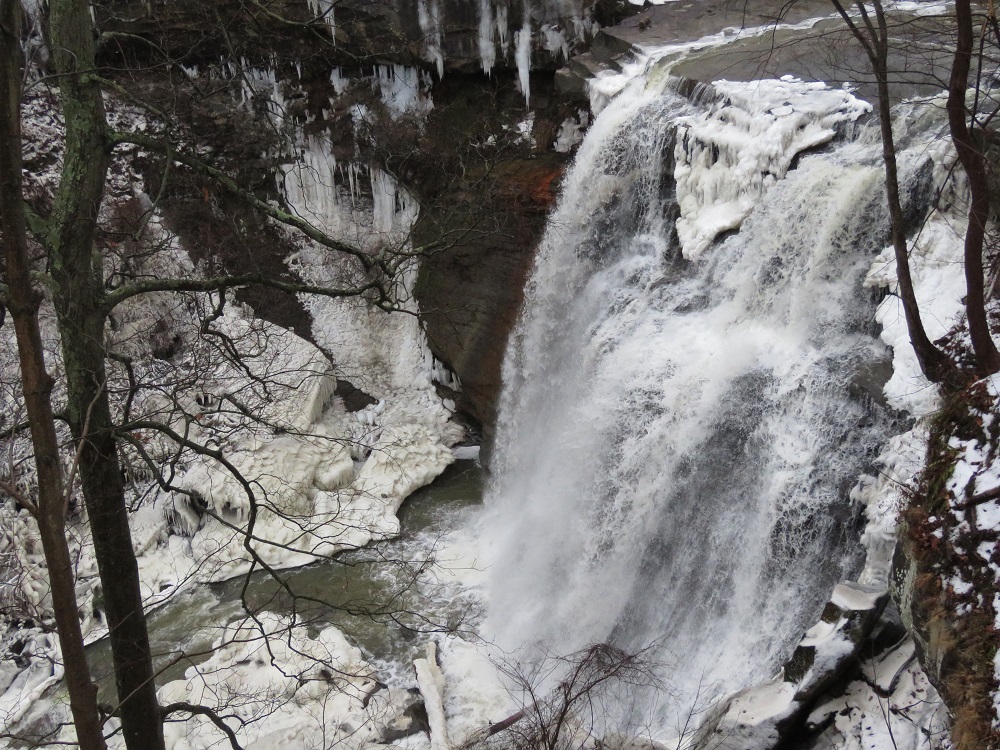 On our way to celebrate the holidays in Michigan, we stopped at Cuyahoga Valley National Park.  We didn’t even know there was a national park in Ohio until a few months ago.  And it turns out we had already passed through it many times without realizing it!  If you have ever driven the Ohio Turnpike through Cleveland, you’ve probably driven past this park without realizing it.  The turnpike actually goes over the middle of Cuyahoga Valley.

It doesn’t have the name recognition of some of the bigger parks, but 2.2 million people annually visit this gem just outside Cleveland.  The area is chock full of history, space for outdoor activities and waterfalls.  Running through the area that became the park was the Ohio & Erie Canal.  The canal’s tow path would be turned into a 20+ mile trail for running, biking and snowshoeing (in the winter).

We stopped, in part, because it was the perfect resting point after a late start for our ten-hour journey.  Given its proximity to Cleveland and Akron-Canton, there were plenty of lodging options within a few miles of the turnpike.  We stayed at the Baymont Inn off the Ohio Turnpike, where the staff was friendly, the room was clean, the bed was comfortable, and the price was reasonable.  Our room with a king bed, desk, mini-fridge and microwave was about $80 with tax.  There was a pool and free continental breakfast from 6-9 AM, which were all of the amenities we really needed given our 1 AM arrival and morning departure.

With rain overnight and snow still on the grass, we slept in and set out for the park at about 8:30 am.  After a bit of driving around to orient ourselves, we ended up at Brandywine Falls.  Brandywine Falls is the second highest waterfall in the state of Ohio.  The handicap accessible trail to the falls had been cleared of snow but there was still a number of spots of ice and slush.

Although the trail starts out heading away from the road, it soon cuts back toward the valley and back towards the road (where the falls is located along the trail).  From the path to the falls, you can soon see the spectacular river running through the valley.

Before reaching the falls, the path splits to the left with stairs down to a lower viewing area.  We weren’t able to get pictures from there because it was closed due to the ice and snow, but we would highly recommend it when open.  We could see the lower platform viewing area from the upper platform and the view looked fantastic.  On the upper path, it is a short and easy walk to the falls.

For our visit, the base of the falls was beautifully covered with snow/ice.  The river was also roaring due to the combination of melting snow from the prior day and rain overnight.  We could hear the roar of the falls and the river well before we saw it.

We took a few selfies and admired the beauty of the gorge and waterfall.  We also wondered how many people had passed through this area without even knowing what lay a short adventure into the woods.

There is a 1.4 mile path around the area for those looking to take in more of the area.

The visitor center at Boston Store opens at 9:30 AM.  Since it was Christmas Eve, there wasn’t much traffic and we had a long conversation with the park ranger about the history of the park.  There is an 18 minute video about the area’s history produced by the park service which is played on demand.  There is also a series of exhibits explaining the area’s boat building past.

We did donate a few dollars at the visitor center to help with conservancy efforts in the park, but there was no entrance fee for the park in part due to its connectedness with the surrounding area.  Traveling by car through the park didn’t involve the isolation from normal life that we saw in Yellowstone – there were homes at various points as we travelled on the periphery of the park.  But even though we were “near civilization”, there are very few roads cutting through the park compared to the development of most cities.

We drove south and west for about ten minutes to get to the other side of the park and pick up the turnpike to continue our journey to Michigan.  It was definitely our shortest trip to a national park so far, but we’re excited to come back to take pictures in the covered bridge, walk the towpath, take the scenic railroad and view the falls surrounded by autumn colors (October is the best time for foliage in the park).