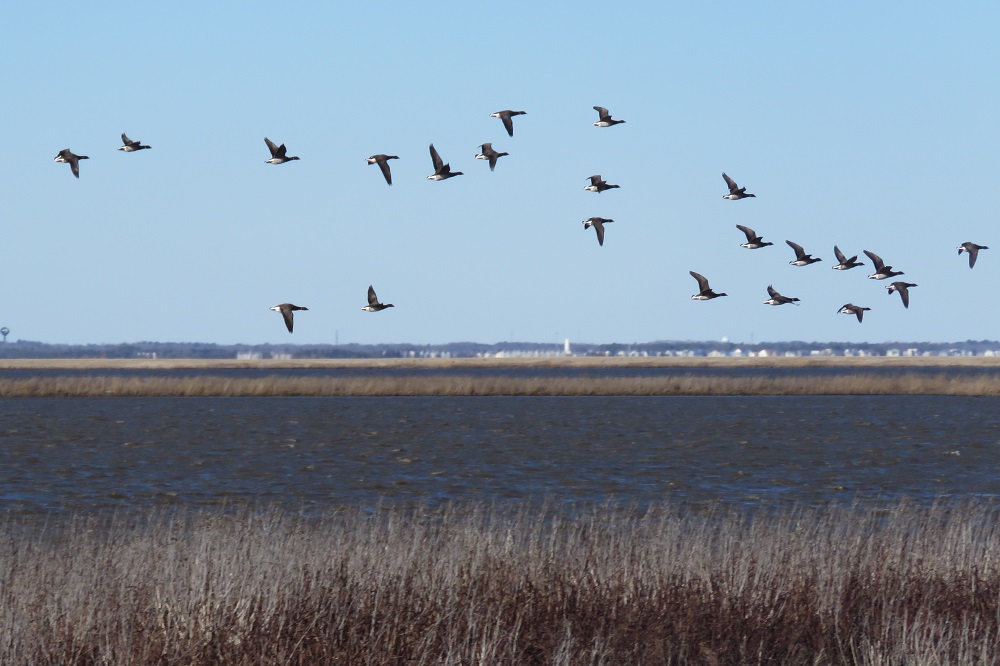 It was a sunny day on Saturday (though a bit windy) so we headed over to Wildlife Drive in Edwin B Forsythe National Wildlife Refuge in New Jersey north of Atlantic City. It is about 90 minutes from the Philadelphia area. 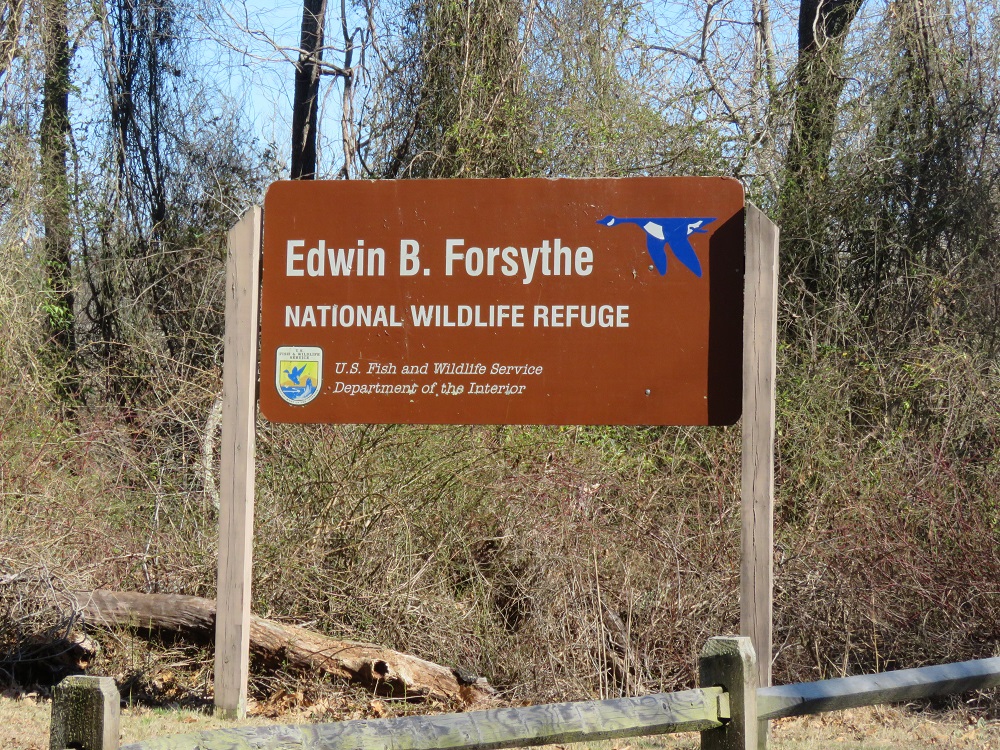 Edwin B Forsythe NWR protects about 47,000 acres along the Atlantic Flyway, including coastal wetlands that are an important pathway for the seasonal bird migration. The park extends along the New Jersey coast for more than 50 miles.

We have been trying to get outdoors more now that it is heating up, and birding has been our excuse. We slept in though, since it was the last day before the clocks turned forward. We did manage to see at least three hawks and several turkey vultures before leaving Philadelphia, so the day was looking good from the start!

The highlight of the wildlife refuge is Wildlife Drive in the Brigatine Division. The Edwin B Forsythe NWR Wildlife Drive is an eight mile, one way unpaved road which allows for driving through the wetlands. It reminded me of the Black Point Wildlife Drive in Merritt Island National Wildlife Refuge. There are trails located near the beginning and end of the drive for those that want to stretch their legs.

The wildlife refuge, which is run by the U.S. Fish and Wildlife Service, turned eighty years old last year. It was originally known as the Brigantine National Wildlife Refuge. The nearby Barnegat Unit (which it would be combined with later) was established in 1967.

In 1984, Congress designated the Brigantine and Barnegat units of the National Wildlife Refuge in honor of Edwin B. Forsythe, a New Jersey Republican who served in the U.S. House of Representives for 14 years. The joint resolution by the 98th Congress noted his leadership in the conservation of the coutry’s natural resources and natural beauty, including sponsorship of the Nongame Wildlife Act and a critical rolse in the Marine Mammal Protection Act, the Endangered Species Act and the Fishery Conservation and Management Act.

There are twenty-two (22) numbered marker signs on the drive. Be sure to grab the visitor information map for the driving tour at the visitor center as it explains the significance of each one of the signs. Otherwise, you will not know what you are looking for there. 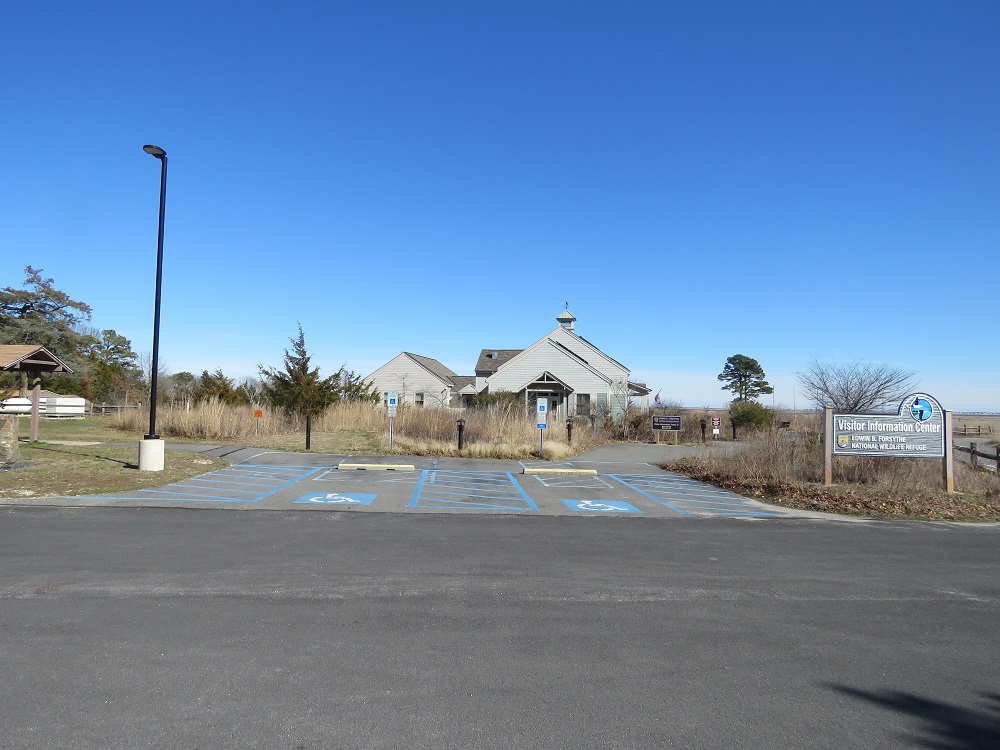 On arrival, we stopped at the visitor center, where we picked up a map and got the requisite stamp in our passport book. We also found out that there had been sightings of a yellow breasted chat in the area of the Leeds Eco-Trail, and we were on our way.

With our eyes peeled for the bird, we got out of the car at stop #1 for the trail. There is a boardwalk over the marsh and a nature trail through the maritime forest departing from the parking area. We walked down the boardwalk first, and then the trail. 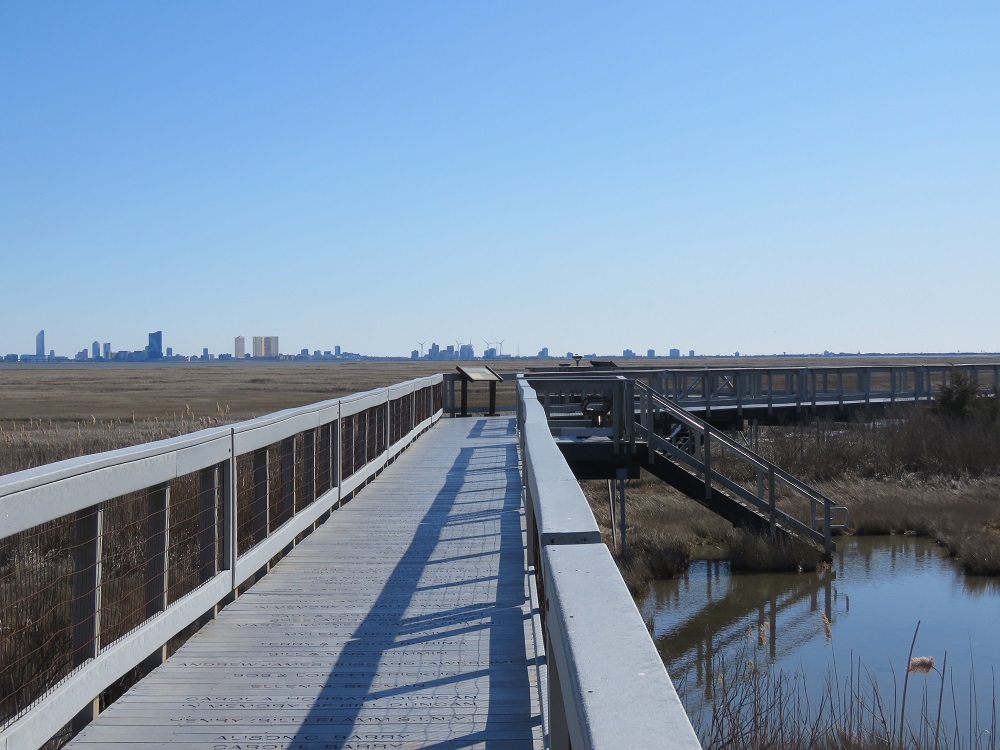 The boardwalk was a bit uneventful, although we did hear and see a few small birds in the distance. One highlight of the boardwalk was that there was a fixed spotting scope (binoculars) which allowed you to see in the distance. We swiveled it to the osprey nest platform, but there were no birds there yet (probably a bit early since it was still early March). There are platforms around the drive – we took this photograph of a closer one later in the drive: 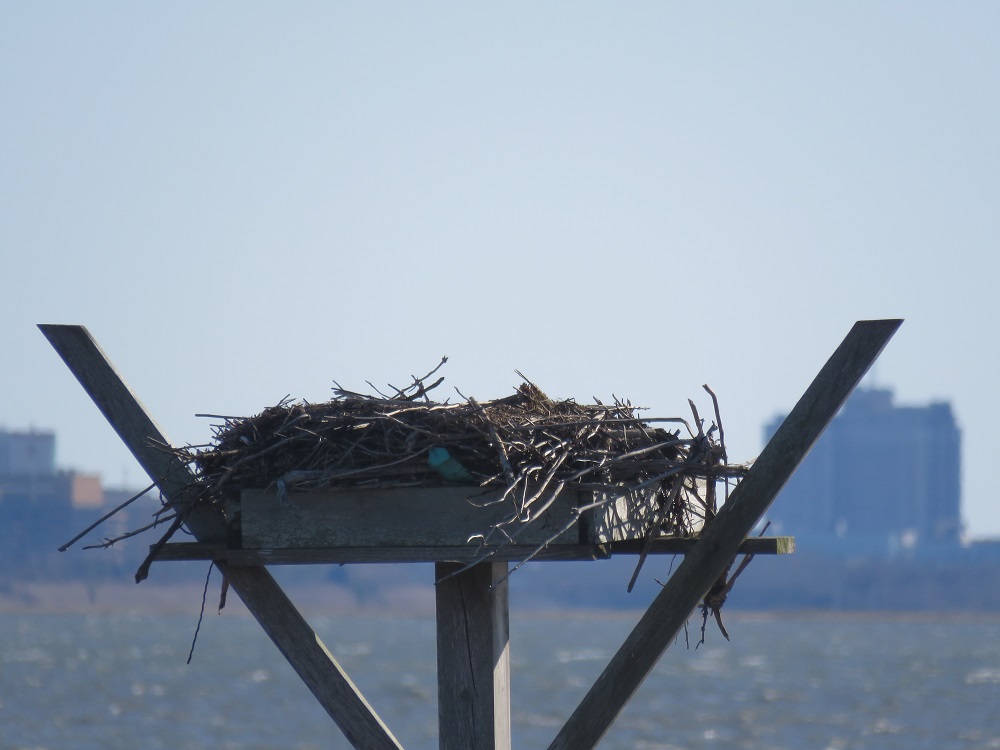 We had better luck for birds on the portion of the trail through the forest, even though we were not on it that long. At the start of our walk, we saw a song sparrow land right on the trail. Before turning back, we managed to see both a ruby-crowned kinglet and a yellow rumped warbler, as well as a few other birds that we were not able to identify. 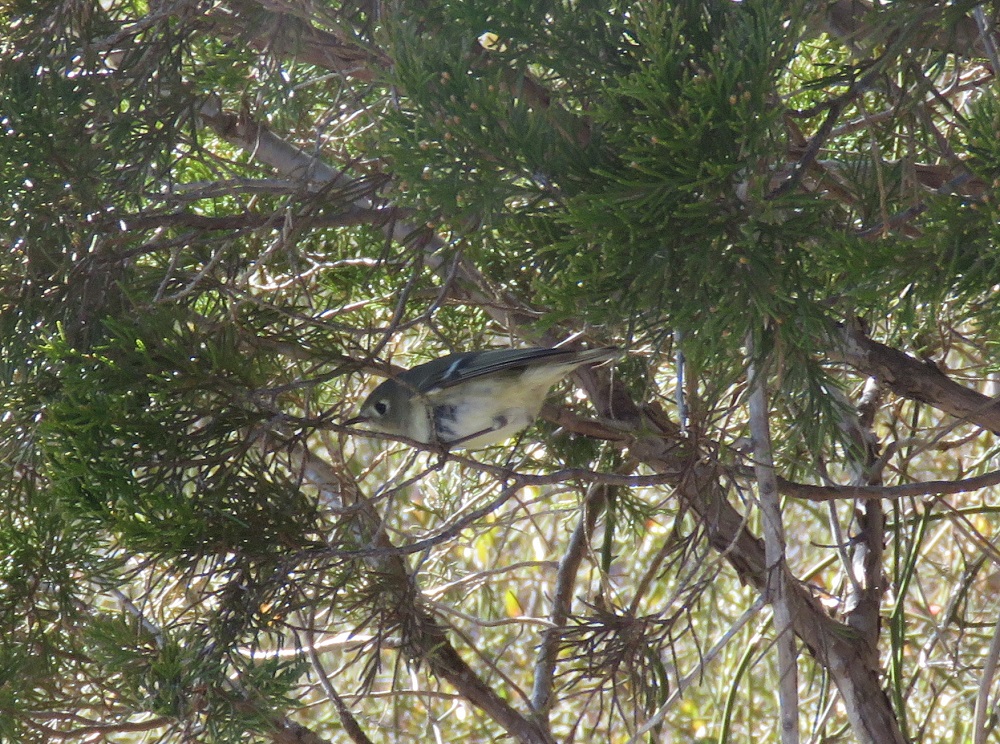 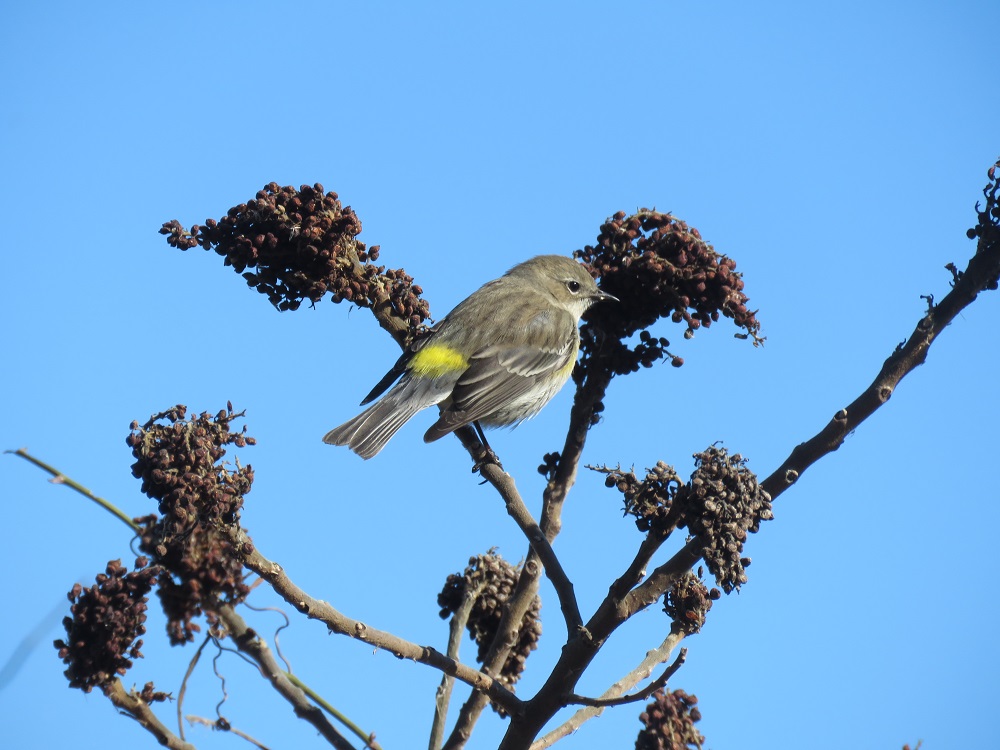 We did not see the yellow breasted chat, unfortunately. We are definitely going to have to work on our small bird identification as we were only able to identify the song sparrow without looking them up later.

Stop #2 involved a brief detour to reach a viewing platform at Gull Pond, before starting the one-way portion of Wildlife drive. The platform allowed us to see a few mute swans, a few northern shoveler, and a great blue heron. This was the view from the observation tower looking to the south over the Gull Pond area: 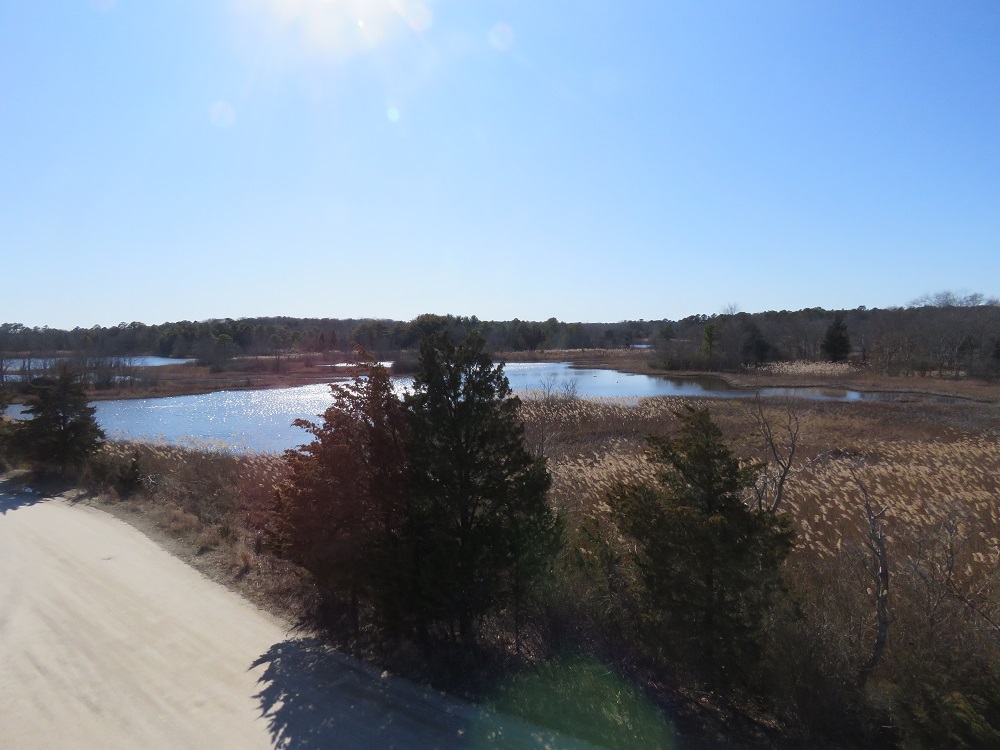 We managed to catch this swan eating some of the aquatic plants while stretching its leg out of the water. 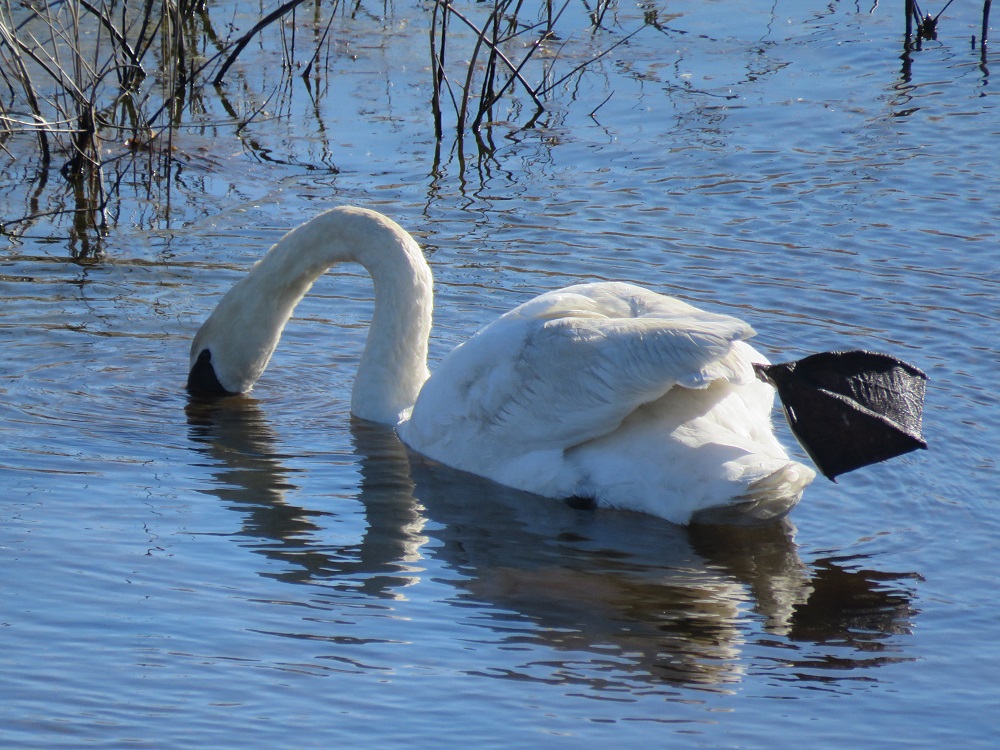 The wildlife drive is known for allowing visitors to Edwin B Forsythe the ability to see wading birds, waterfowl and birds of prey from the comfort of their car. We did not manage to see any hawks while we were there, but you should definitely keep your eyes peeled for bald eagles, osprey and other birds of prey while you are there.

The gulls were one of the unexpected attractions of the trip. They were picking up mussels and dropping them onto the gravel road in order to break them open and eat them. If you have never seen this behavior, it is quite a sight. 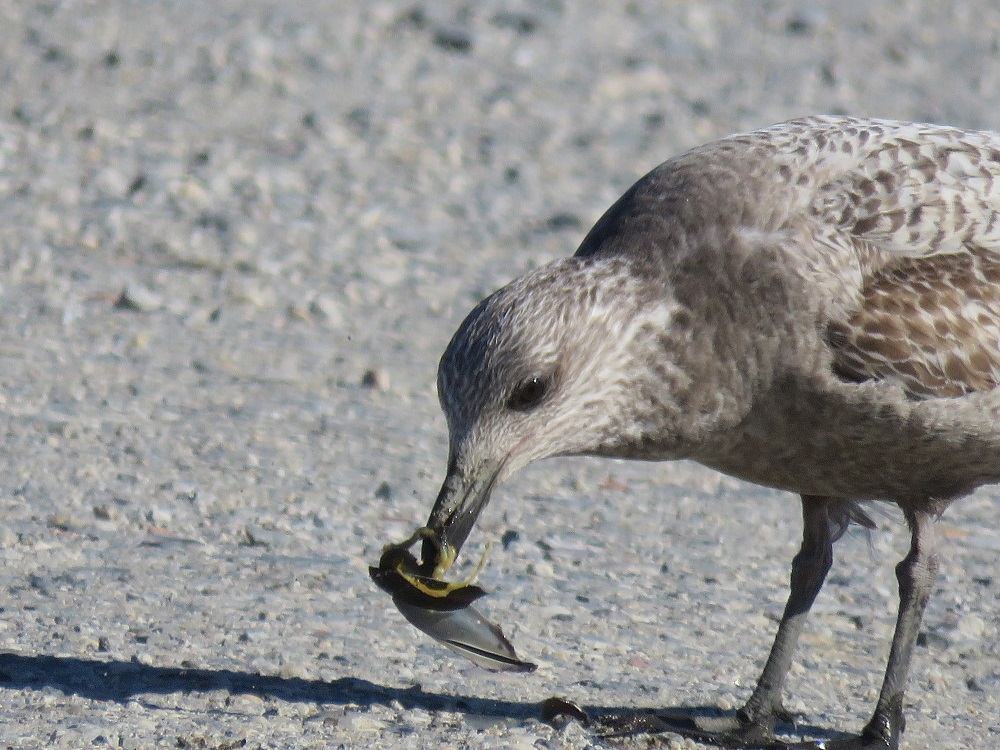 This did made driving a bit more difficult, as you had to keep a constant eye on them since they were always in the road trying to eat. Fortunately, there were not too many of them.

If you are going to see the waterfowl, be sure to take a good pair of binoculars. You can rent them at the visitor center / gift shop when they are open, but you have to return them by the time that they close. The closing time was 3 PM on the day that we went there, so it was not really an option. The drive remains open until sunset.

If you decide to ascend one of the viewing platforms on a windy day, be sure to keep a hold of your hat and other possessions. As I was about to descend the South Tower, a gust took my hat off and blew it in to the road. Fortunately, it was still there when I finished climbing down the stairs and I was able to retrieve it.

This is the south tower: 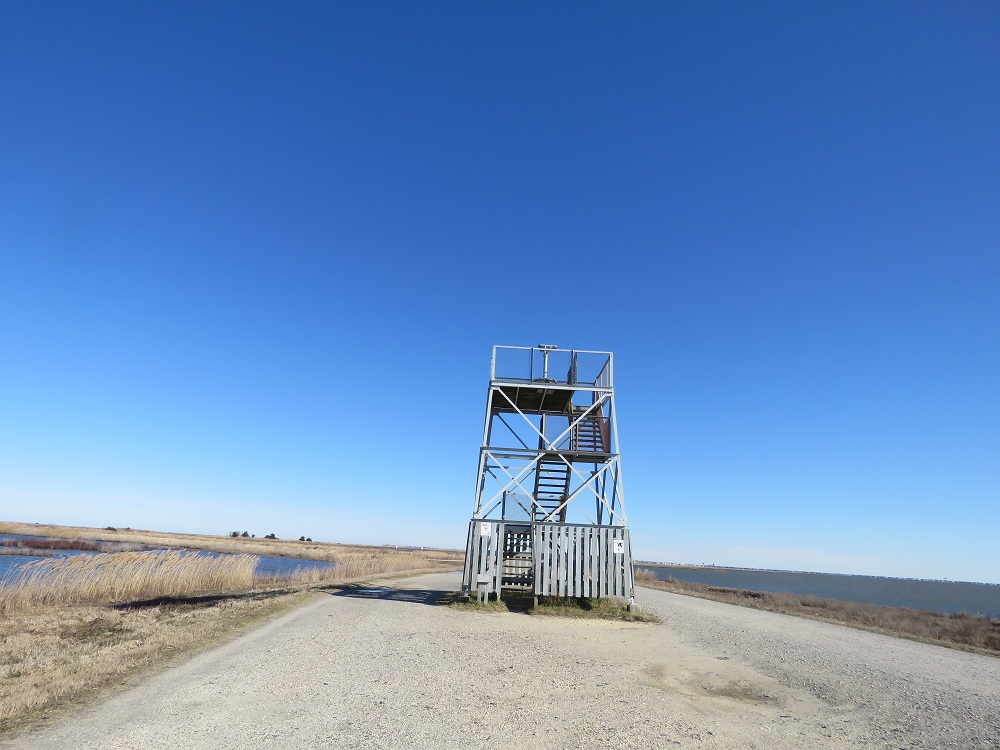 This is the view to the east/northeast of wildlife drive and the marsh from the tower: 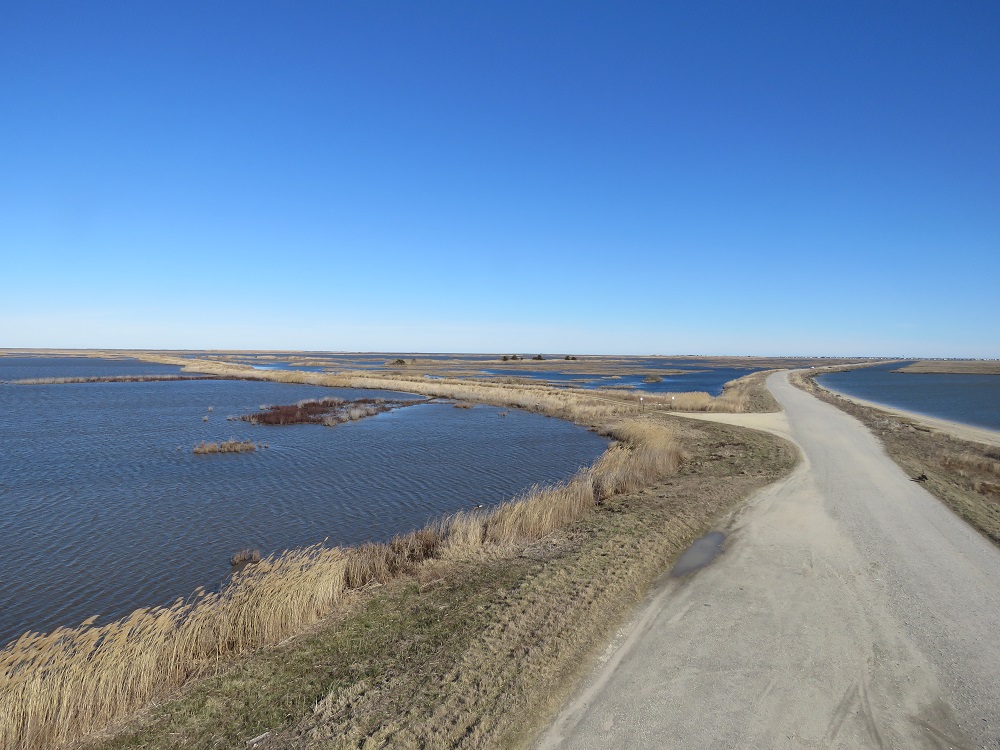 Here were some of the photographs of birds that we took on the first half of the drive: 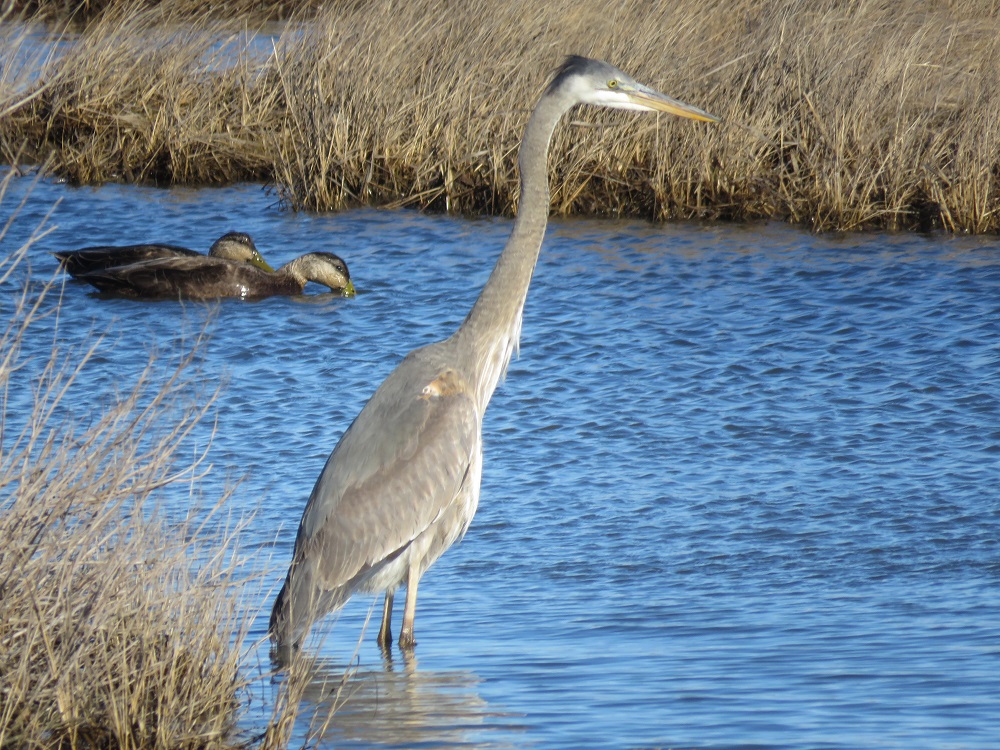 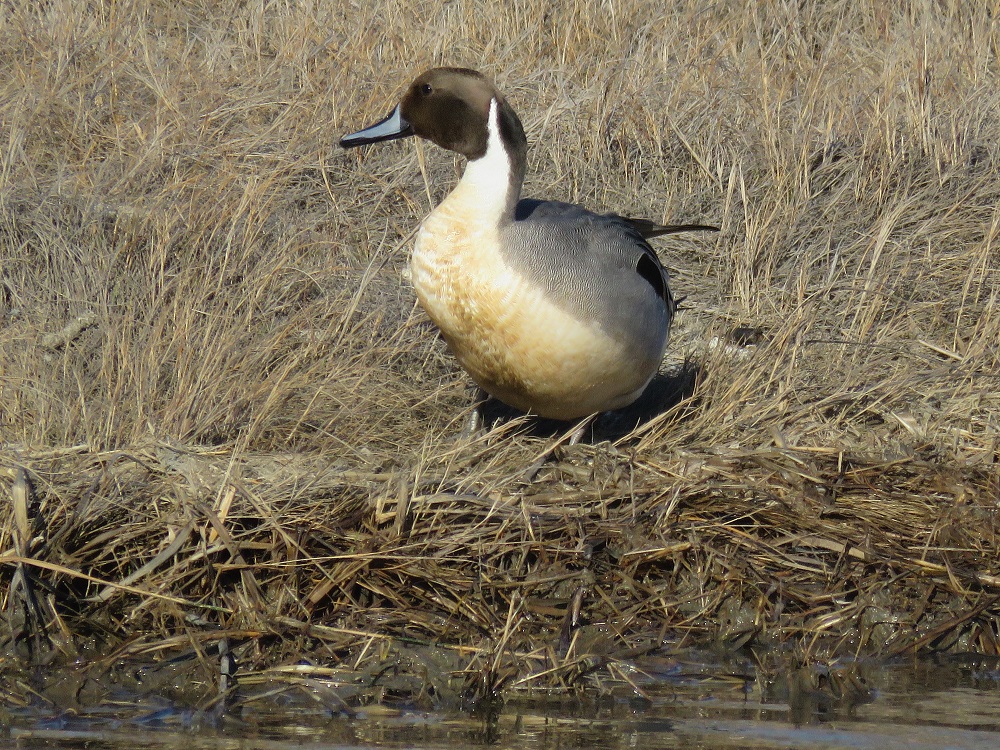 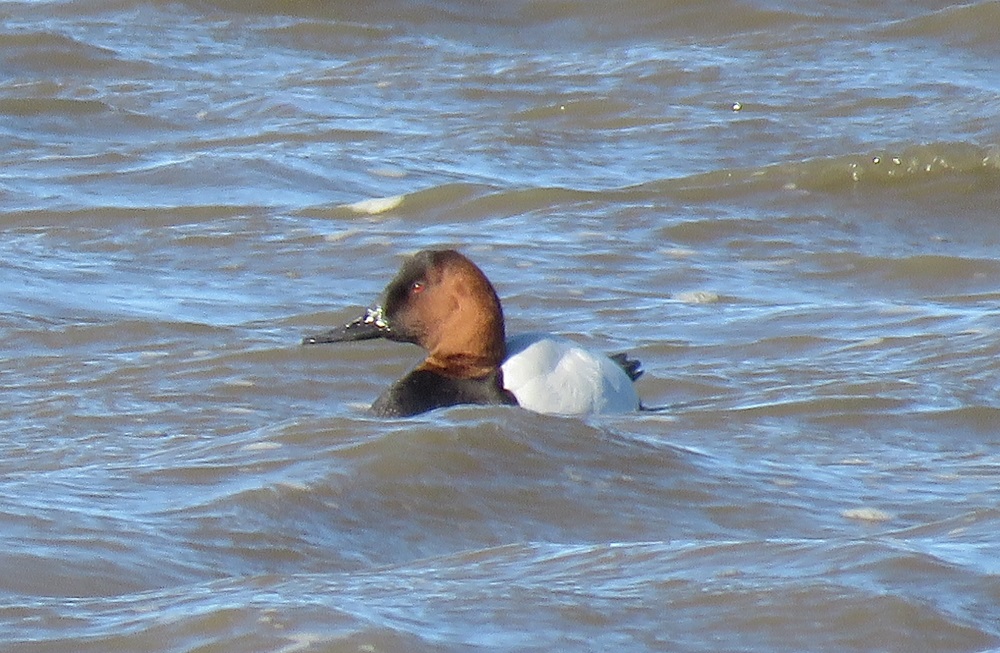 We did not make it out to Middle Creek this year to see the snow geese, but we did manage to see some along the drive. It looks like one might be a Ross’s Goose instead. There were also a bunch resting in one of the marsh fields at a distance. 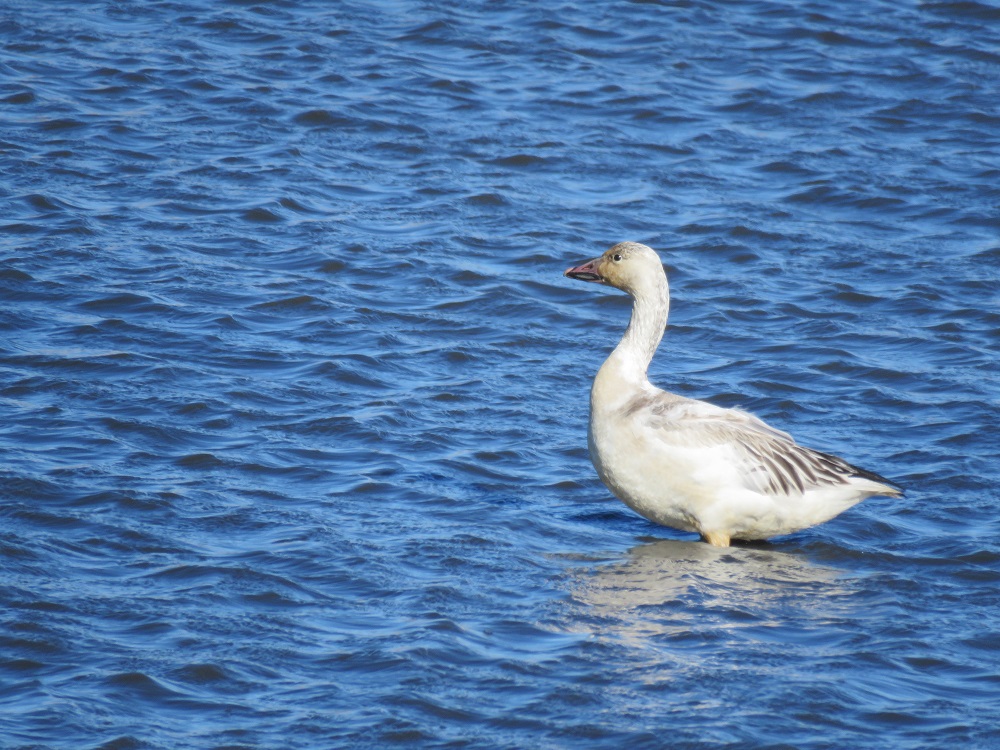 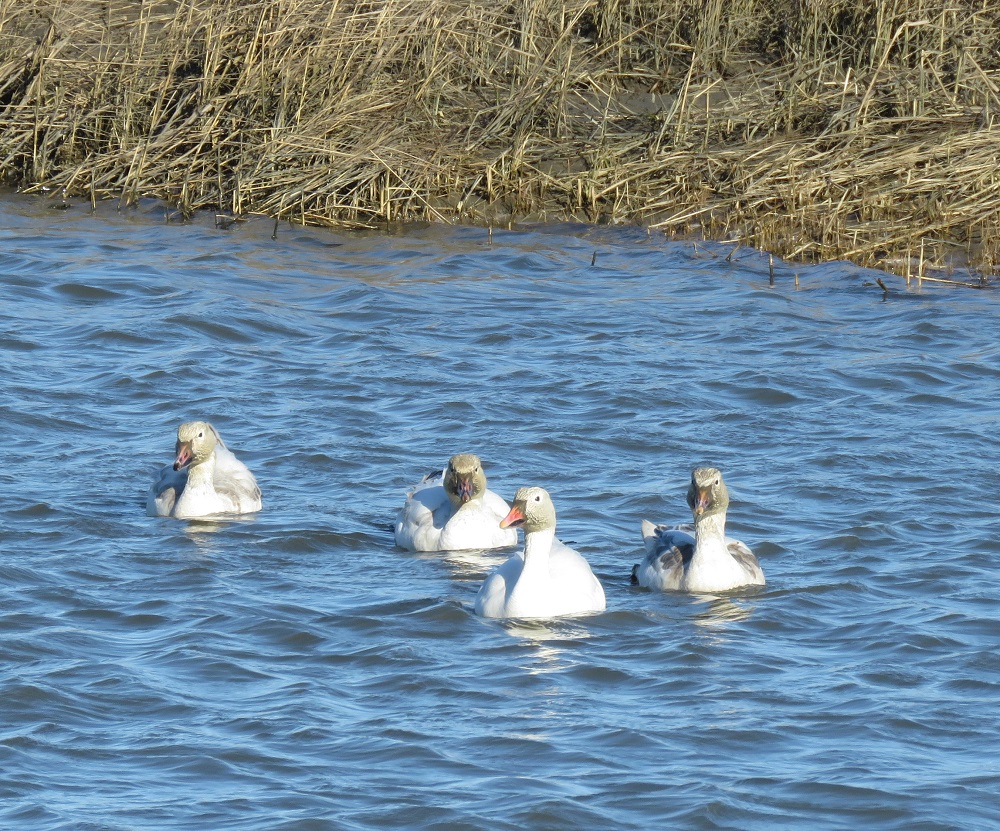 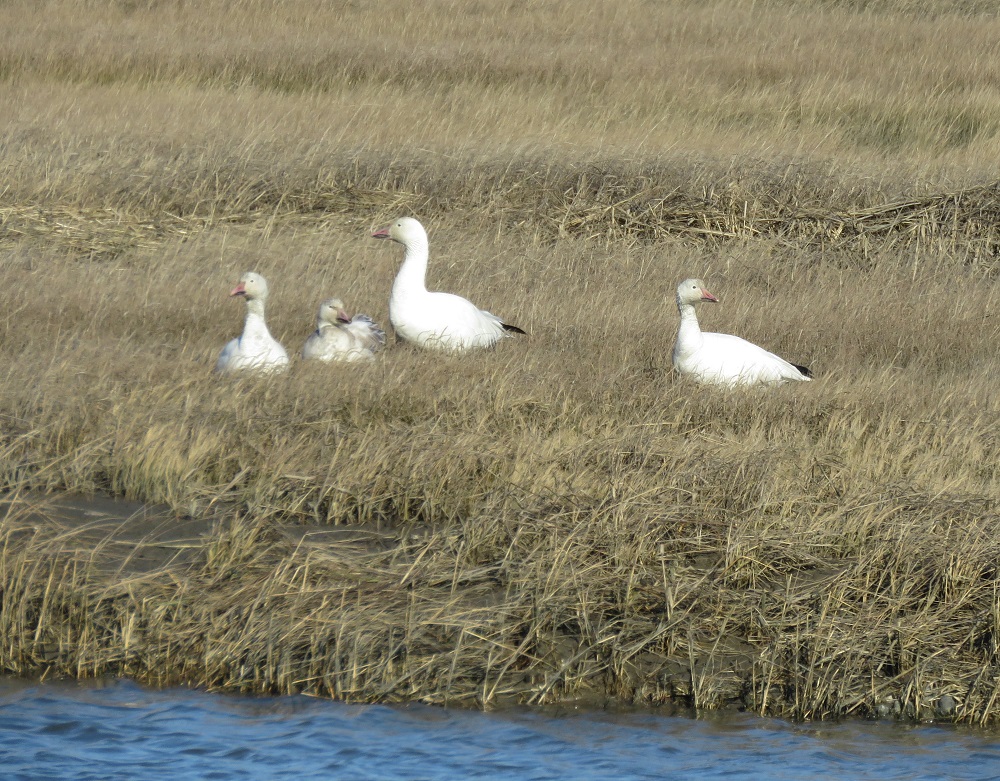 We went pretty slow on the first half of the drive out, and traveled back at a faster pace. The sun was getting lower in the horizon, which made it harder to see and photograph the birds in the marsh on the south side of the road. It was probably made a bit faster too by the fact that we had a few snacks that we brought for the trip.

Here were a few of the birds that we saw on the back half of the trip: 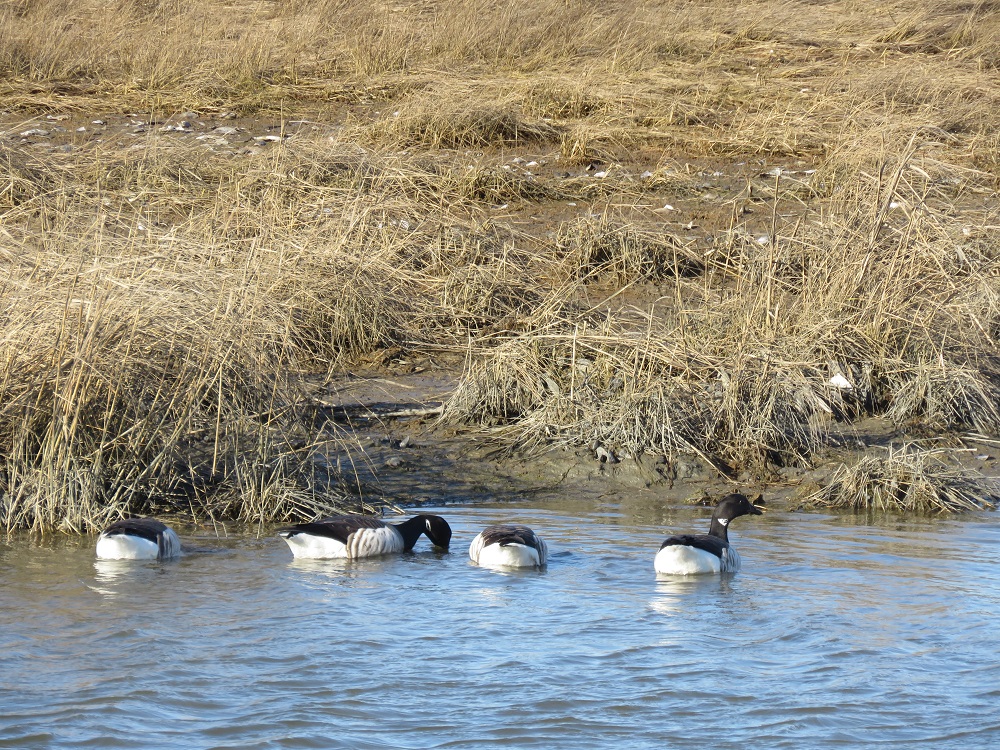 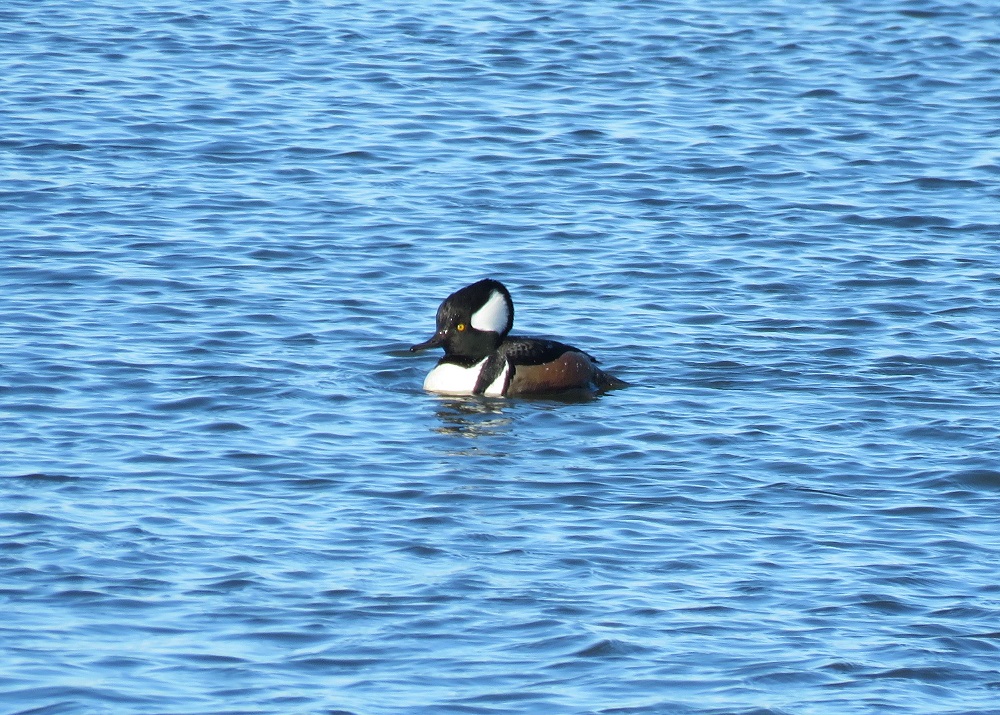 The last section of the one-way wildlife drive leaves the marsh behind for fields and the forest. We stopped at the experimental pool overlook, but otherwise traveled pretty quickly through it with an eye to reaching the bathrooms at the visitor center. 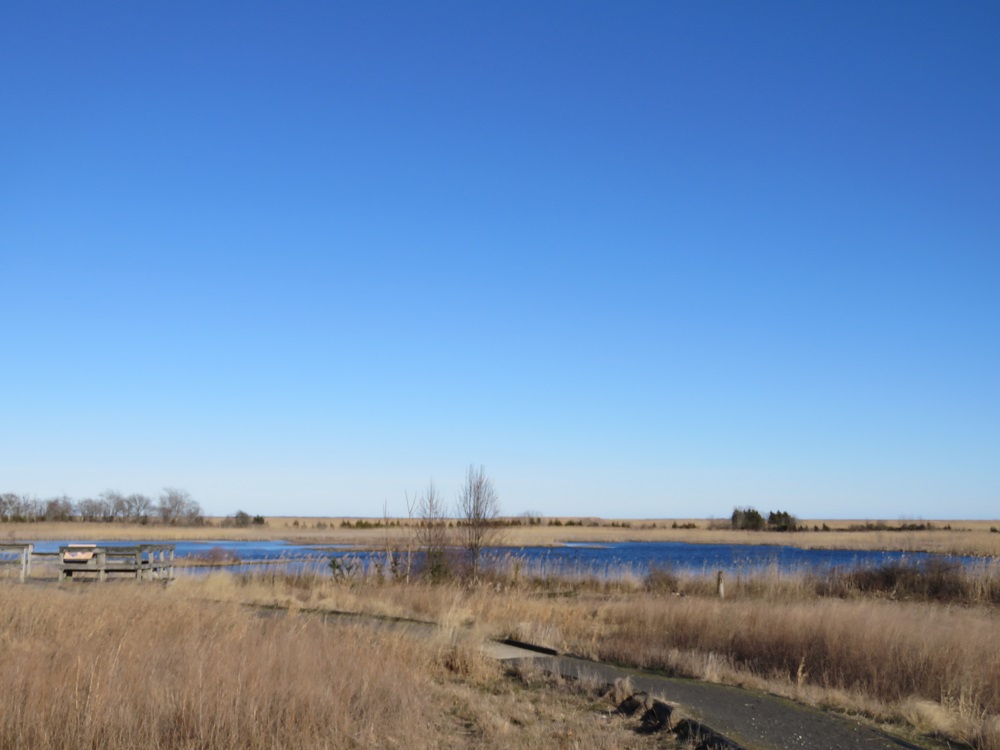 Jayne from the car got a great photo of me attempting to photograph a turkey vulture here!

Since we had a decent drive to get back to the Philadelphia area, we took to the road. We saw two more hawks on the way back (one in flight and one in the tree), as well as a number of other turkey vultures to round out the birdwatching.