We arrived at San Francisco airport on a late Sunday night flight and after a stop at the rental car agency (where we got a Ford Mustang convertible) we headed to the hotel – the Comfort Inn by the Bay. 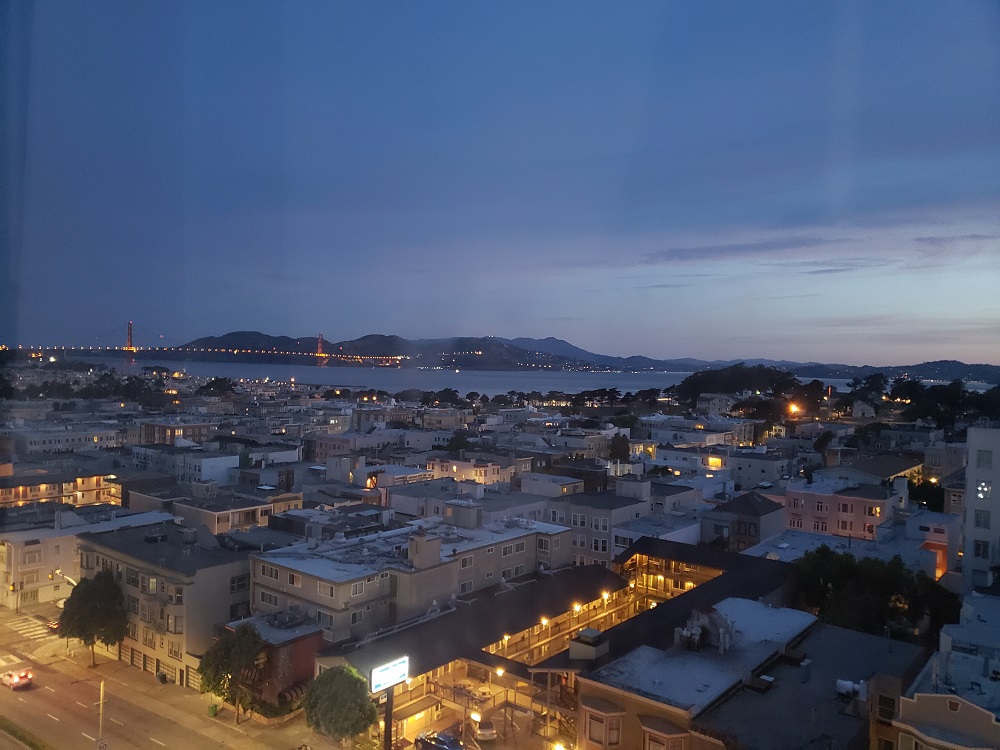 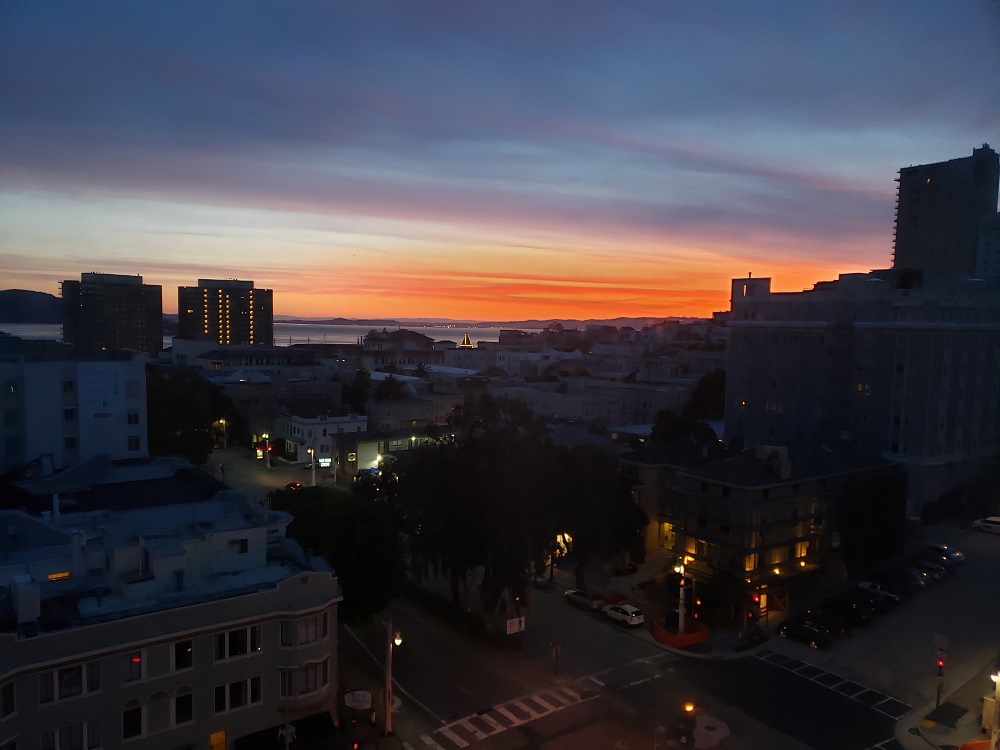 I was looking for something affordable where I could get a view of the Golden Gate Bridge at night – and we were able to secure a view on an upper floor despite our late reservation. The sunrise was worth every penny!

After the short night’s sleep, we walked down to the wharf and our first stop was the San Francisco Maritime National Historical Park, We walked out onto the pier to enjoy the views of the Golden Gate Bridge, Alcatraz and Fisherman’s Wharf. 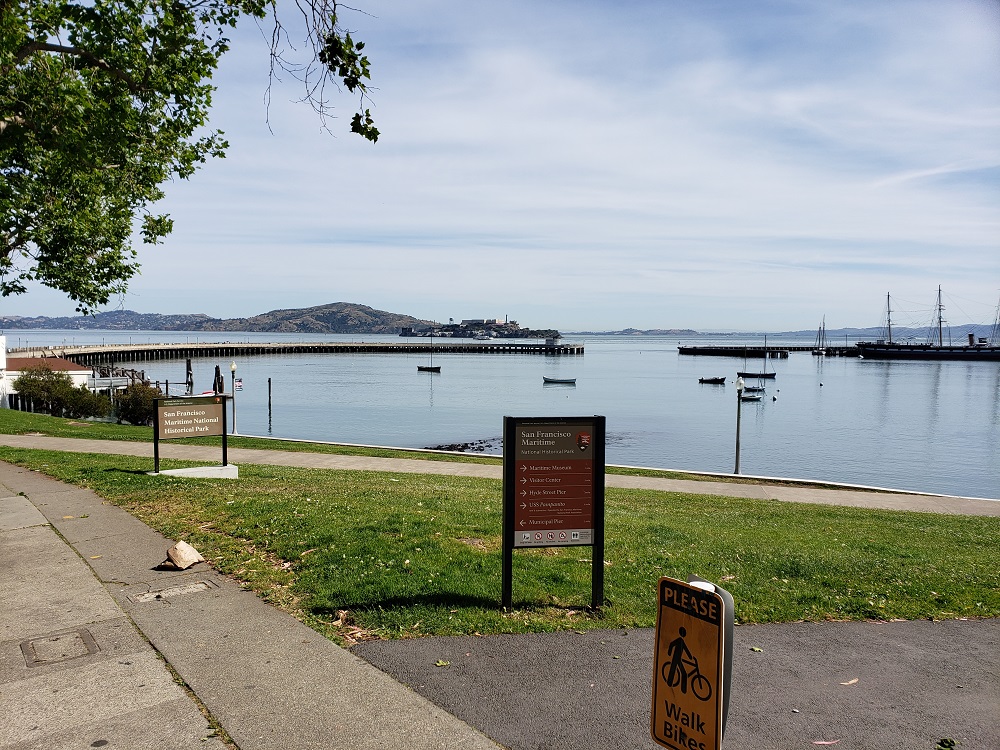 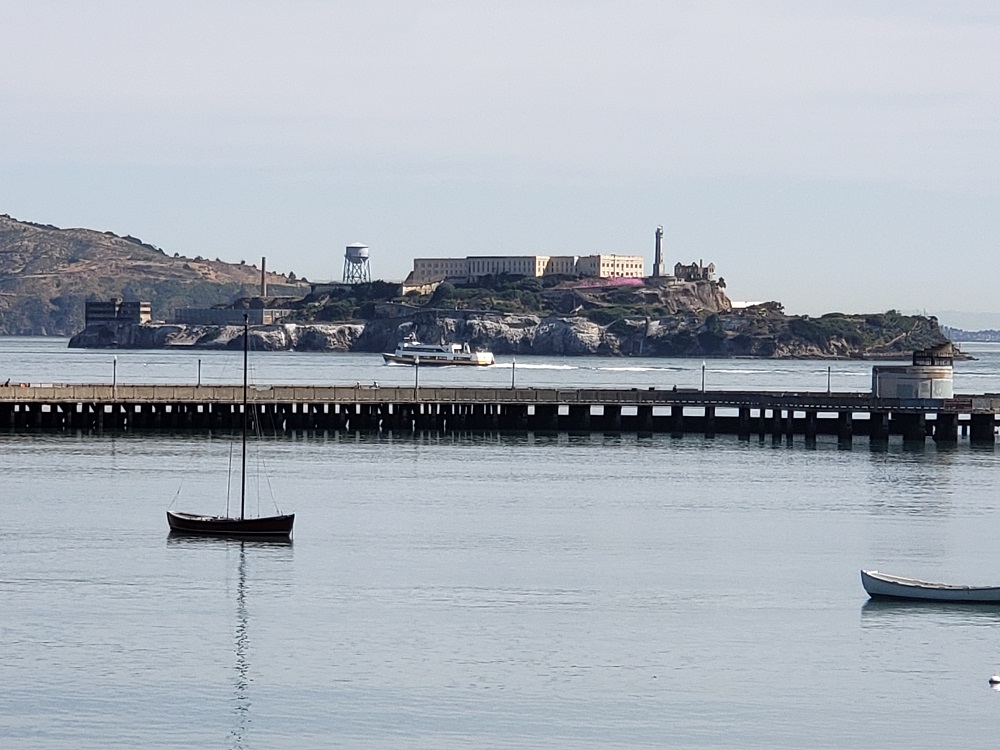 We then made our way down the waterfront, stopping at an electronics store to pick up a memory card and charger for the camera battery (which we accidentally left at home in the rush), before going to Pier 39 to see the sea lions. There was a big crowd there watching them, but we were able to get a few photos thanks to the telephoto lens on our Canon SX60 camera. 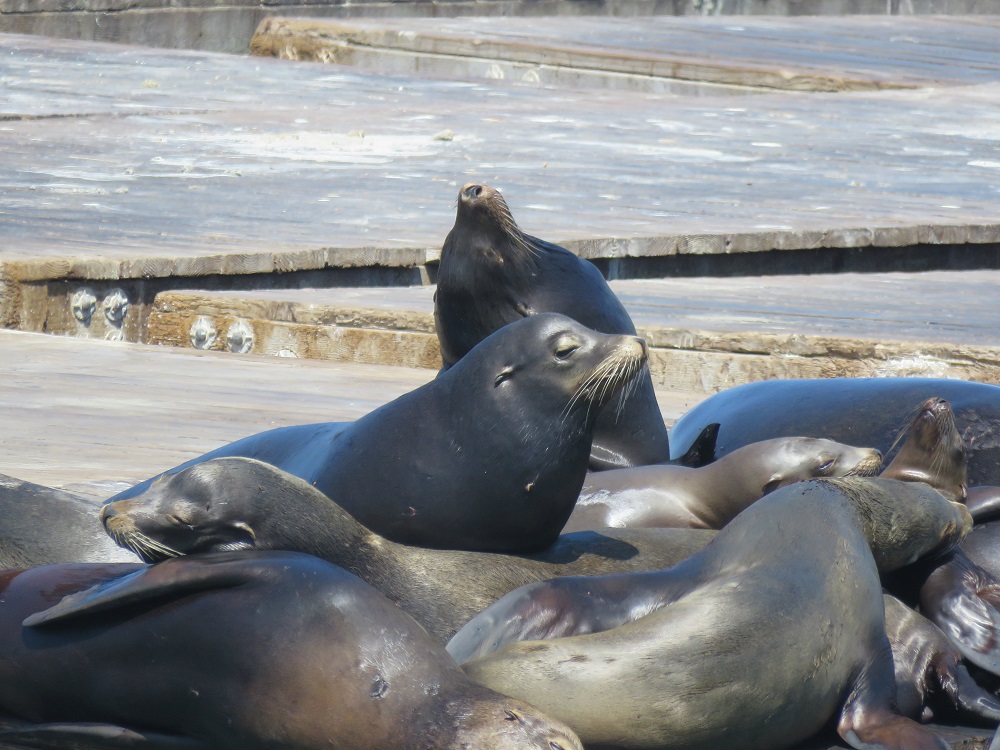 We also stopped at the Krispy Kreme in Fisherman’s Wharf, which is apparently the biggest franchise location in the United States.

It was about time to check out of the hotel, so we headed back, enjoyed breakfast, and planned our day. We found out that we needed to make a reservation for parking at Muir Woods National Monument, and we were fortunately still able to get a mid afternoon time (probably because it was a Monday!). We sketched out the rest of our adventure – a drive across the Golden Gate Bridge and up the coast to Point Reyes National Seashore before returning to downtown San Francisco for dinner with family after the stop at Muir Woods. The timing would be tight but it seemed possible.

We jumped into the convertible, put the top down, and we were soon driving across the Golden Gate Bridge! We had a packed day already so we did not stop at the overlook, but this is something that we would encourage of everyone when you are there. It looked to be very popular and pretty. 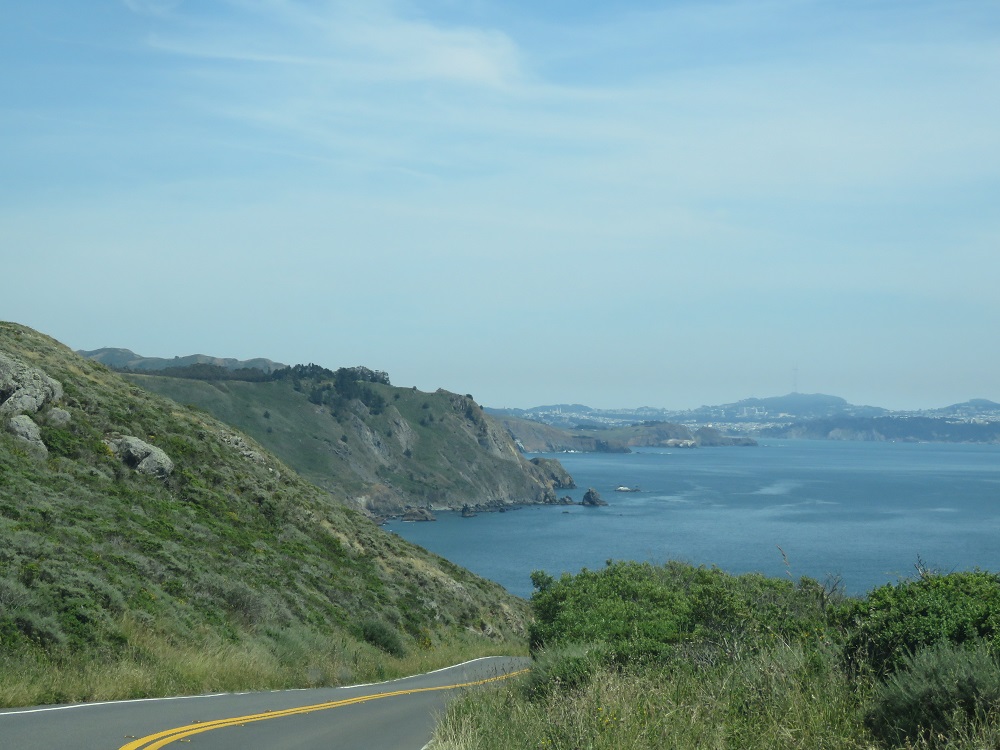 There was some traffic until we made the turn for the Pacific Coast Highway, but it was smooth sailing after that. The section along the coast was incredibly beautiful and the convertible was the perfect way to enjoy it. We left the Pacific Coast behind when Highway 1 passed Stinson Beach and Bolinas Lagoon, but we were soon to be reunited with the Pacific Ocean.

Point Reyes was our second visit to a national seashore. We already spent some time at Canaveral National Seashore when we were in Florida. 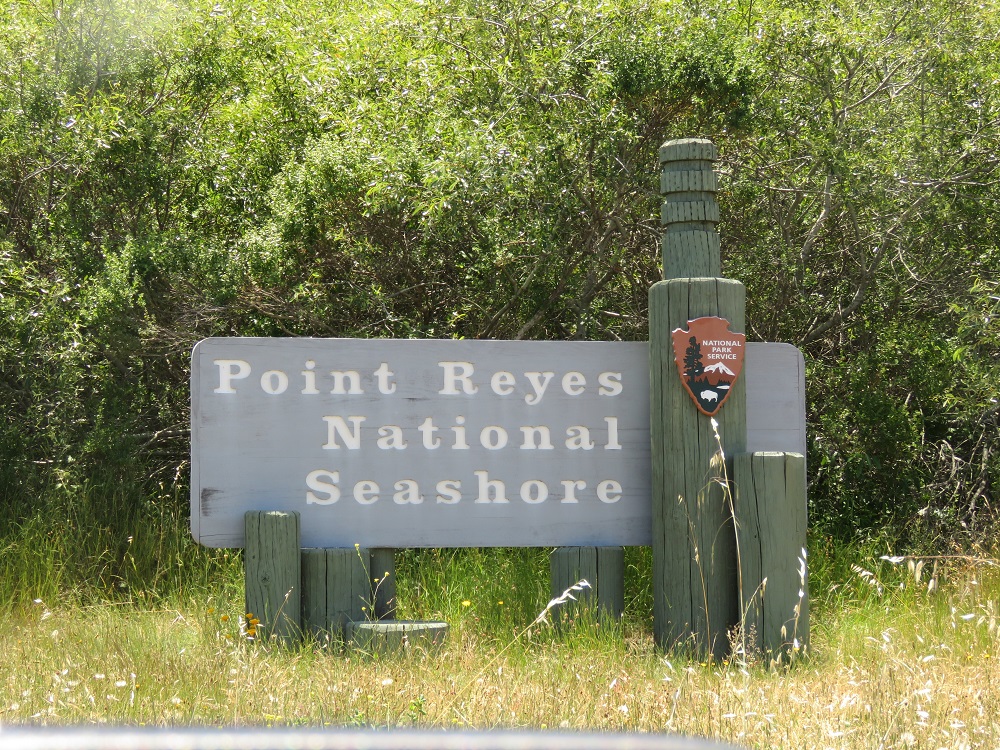 We found the Bear Valley Visitor Center, but discovered that it was not very close to the beach at all! After getting our passport stamp, and still determined to dip our toes in the Pacific Ocean for the first time despite being a bit short on time with Muir Woods, we drove to Limantour Beach.

After parking, the beach was close but this was where we ran into some trouble. We made the dash across the sand trail to the beach and the sand was so hot! It was a heat wave and the sand was burning up. The hot sand was getting trapped in the sandals and there was simply no relief at all. Jayne eventually decided to remove her Keens and make a run for it, which was not a smart move. The dip in the ocean was pleasant, but on the way back we found out that Jayne really burned her feet. 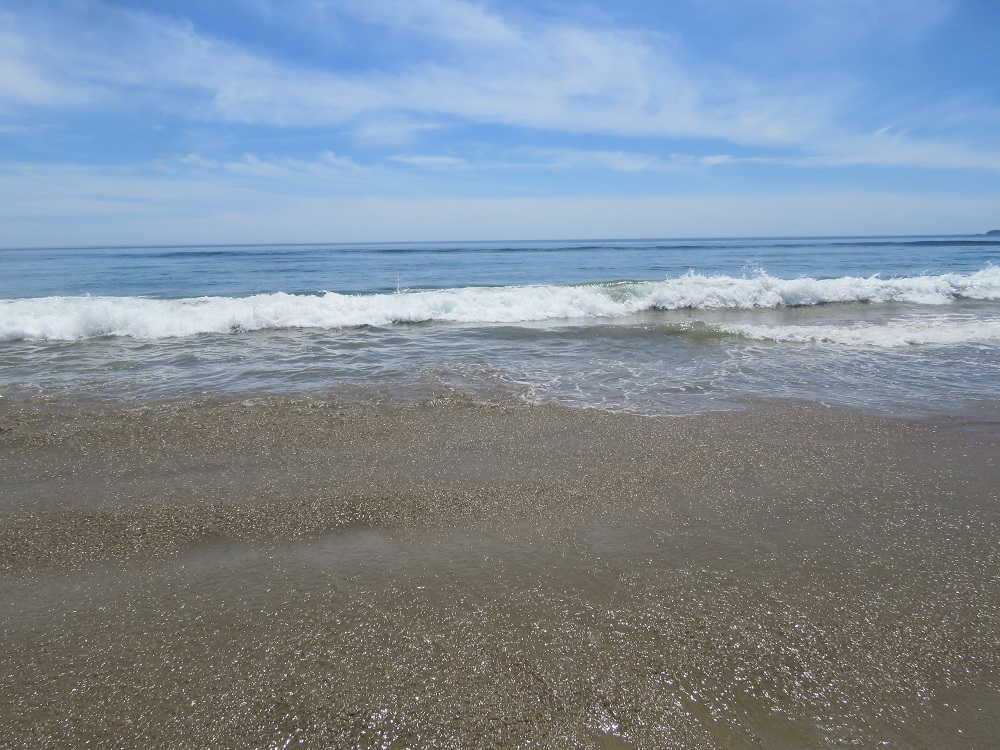 We spent less than 10 minutes at the beach as we had our timed parking reservation at Muir Woods which was still a significant drive away. We really didn’t do the seashore justice, but that was all of the time that we had. We were only about a half hour late getting to Muir Woods and we did not have a problem getting in despite being late. The attendant waved us right in and we worked our way to the back of the lot for a spot.

The one thing that will always stick with me about our trip to Point Reyes and Muir Woods was the smell. It was unbelievable and relaxing. 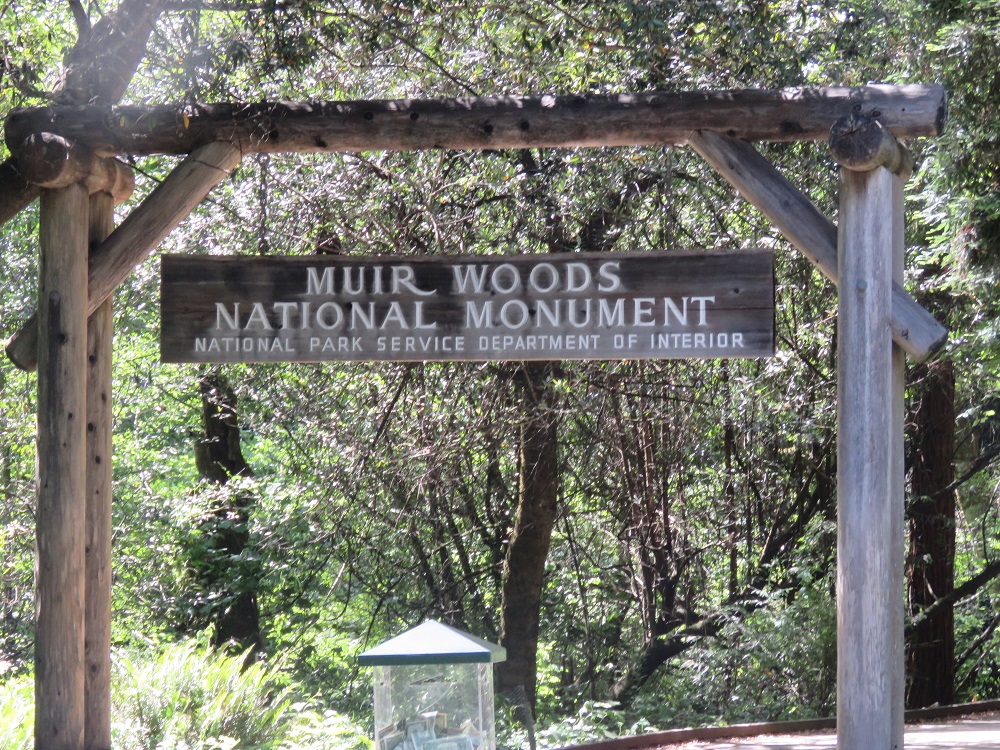 We spent about an hour at Muir Woods, making our way down the trail to Founder’s Grove, although we could have easily spent much more enjoying the serenity.

Muir Woods National Monument was created by President Theodore Roosevelt in 1908. The land was donated by Congressman William Kent to protect the coastal redwoods, and he requested the park be named in honor of John Muir, a naturalist and conservationist who was an important advocate for protecting the wilderness of the United States. 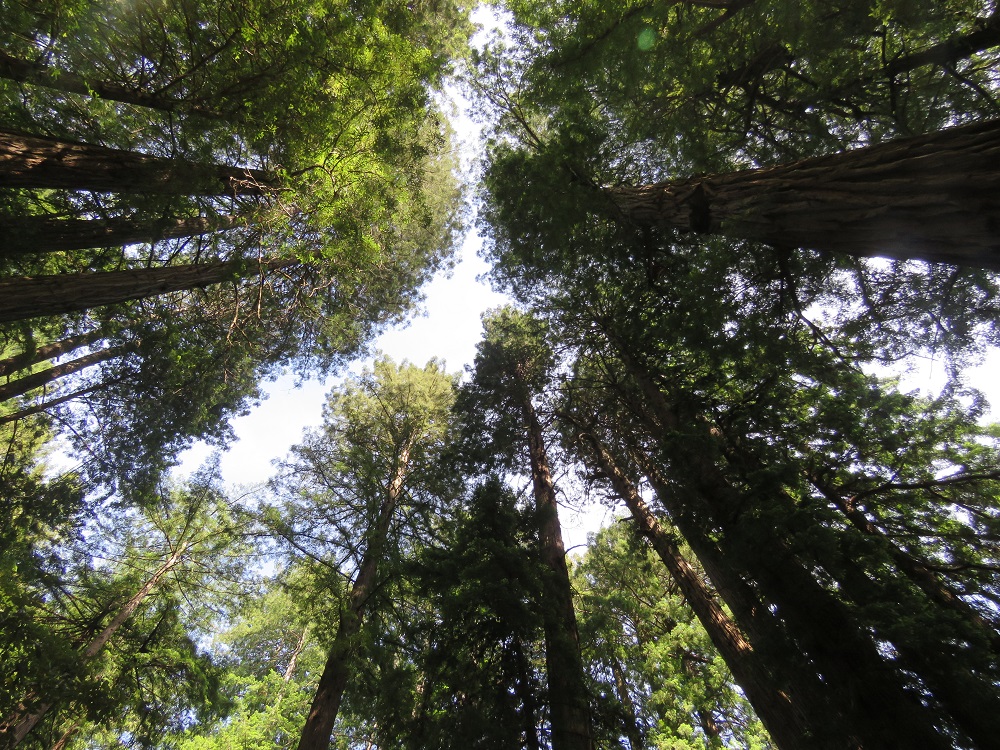 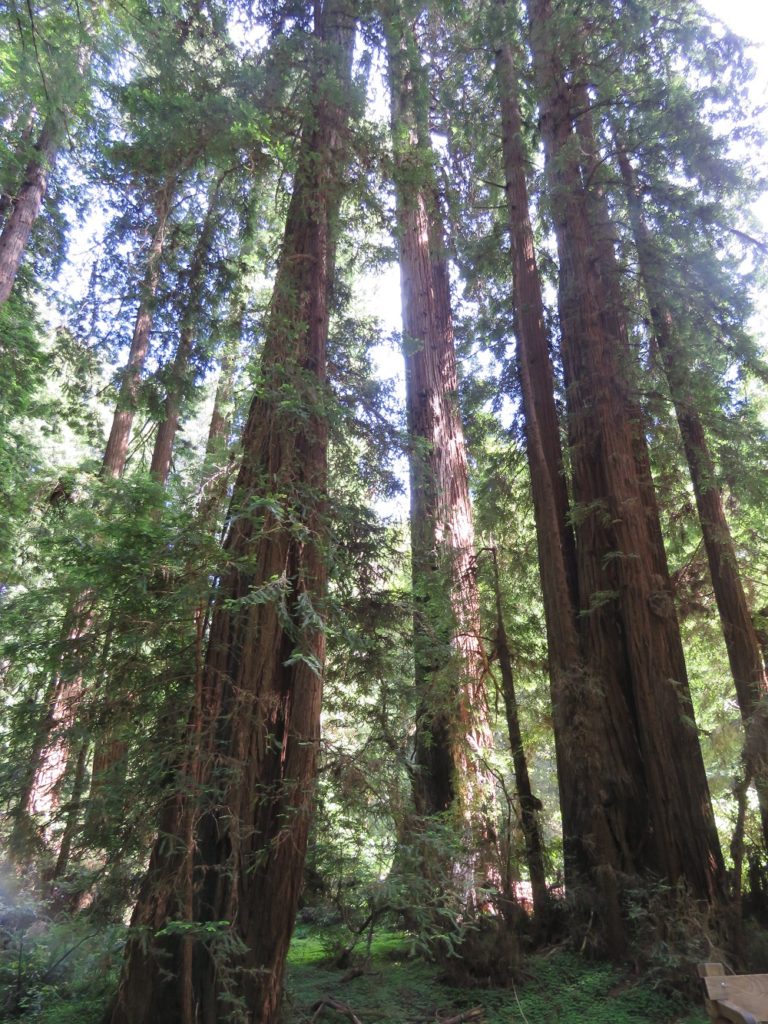 The coastal redwoods are the planet’s tallest living things, with the tallest in Muir Woods reaching 258 feet. They are a close relative of the Giant Sequoia which we saw later in our trip at King’s Canyon and Sequoia National Park. Perhaps one day we will also have to go find the tallest coast redwood (named Hyperion), which stands at nearly 380 feet tall and is located not in Muir Woods but in a remote area of Redwood National and State Parks.

Our trip back over the Golden Gate Bridge and through the city happened in the middle of rush hour, so there were plenty of traffic delays. But we weren’t too late for our dinner plans, so the day worked out well.

After dinner, we went back down to Fisherman’s Wharf to get some dessert at Ghiradelli, but after we drove down Lombard Street (the Crookedest Street in the World) and stopped to watch the sunset, we ended up missing the ice cream shop since it closed (way too early for the summer) just before we got there. 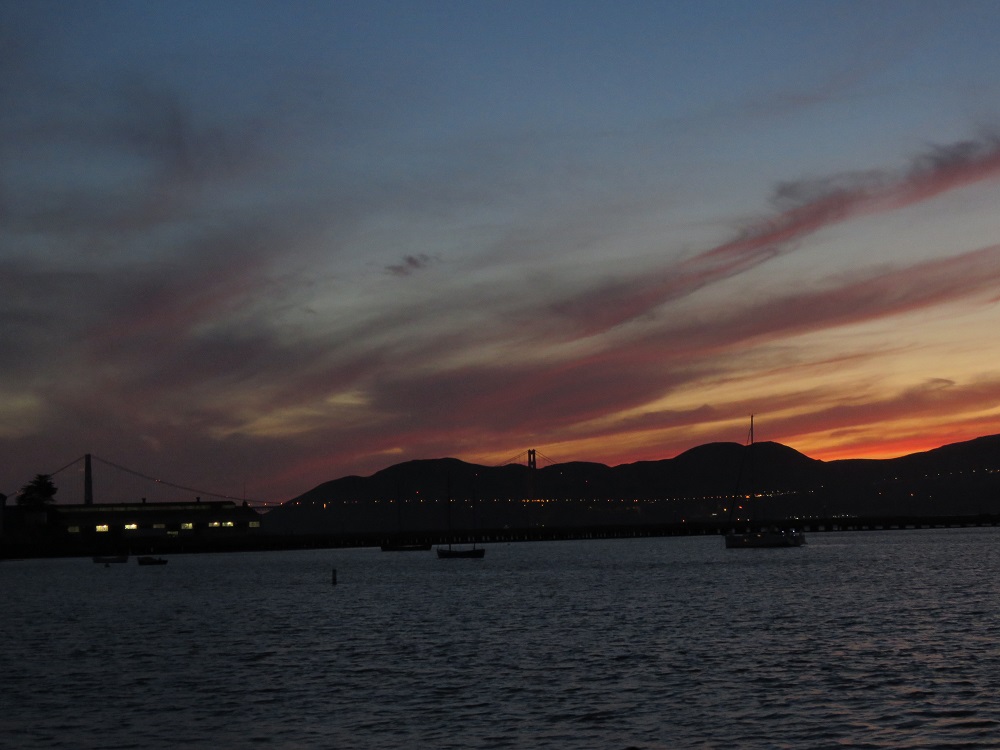 With plans to start the next day by driving into Yosemite, we headed east and crossed the Bay. We ended up stopping for the night in Oakdale and went to bed with dreams of Yosemite dancing in our heads.

We will post more photos of the giant redwoods in Muir Woods and the rest of the day soon!