The Great Onyx Cave Lantern Tour offers a trip through one of the most pristine caves regularly toured at Mammoth Cave National Park. Whereas visitors through other cave entrances had tour guides write their name on the ceiling, or piled rocks, this was not permitted by the operator of the Great Onyx Cave, Miss Lucy Cox. The cave was privately owned and operated from its discovery in the 1910s until it was purchased by the park service in the 1960s. The national park started conducting the Great Onyx Tour in 1975.

Of the four tours that we joined, this was unique in that it was conducted by lantern light. At the entrance, ten or so lanterns are handed to guests to carry as the group moves through the cave. Visitors are instructed how to carry the lantern by their side once getting off the bus. At stops, the lanterns are rested on the ground with the handle set low so that it remains cool to the touch. Because we were interested in taking photographs of the cave, we made sure that we ended up carrying one of the lanterns and we thought it added to the experience. It was hot at times, but we managed and did not get burned.

This tour is usually only offered twice a week. We were there in Fall 2017 and it ran on weekends departing just before noon. On the Spring 2018 schedule, it will be held on Friday and Saturday in the early afternoon. If you want to experience a lantern tour, this is a great choice. It is also a solid choice for those interested in a history of the business of cave tours and the famous cave wars. It is not on the schedule for Winter 2017-2018.

The cave entrance is reached by a short bus ride from the visitor center. It is located under Flint Ridge northeast of the Lodge and Visitor Center. The total round trip plus tour is approximately two hours.

The story told on the Great Onyx Cave Tour is one of the discovery of the cave and its operation during the Kentucky cave wars by Miss Lucy, the lawsuit over it and its eventual sale to the park. The cave was discovered by her father L.P. Edwards in 1915. However, Miss Lucy was a fierce competitor in the cave wars and extracted a lot of money from her customers. When Mammoth Cave National Park opened, they refused to sell and the cave continued operating privately until it was sold to the government nearly 20 years later. 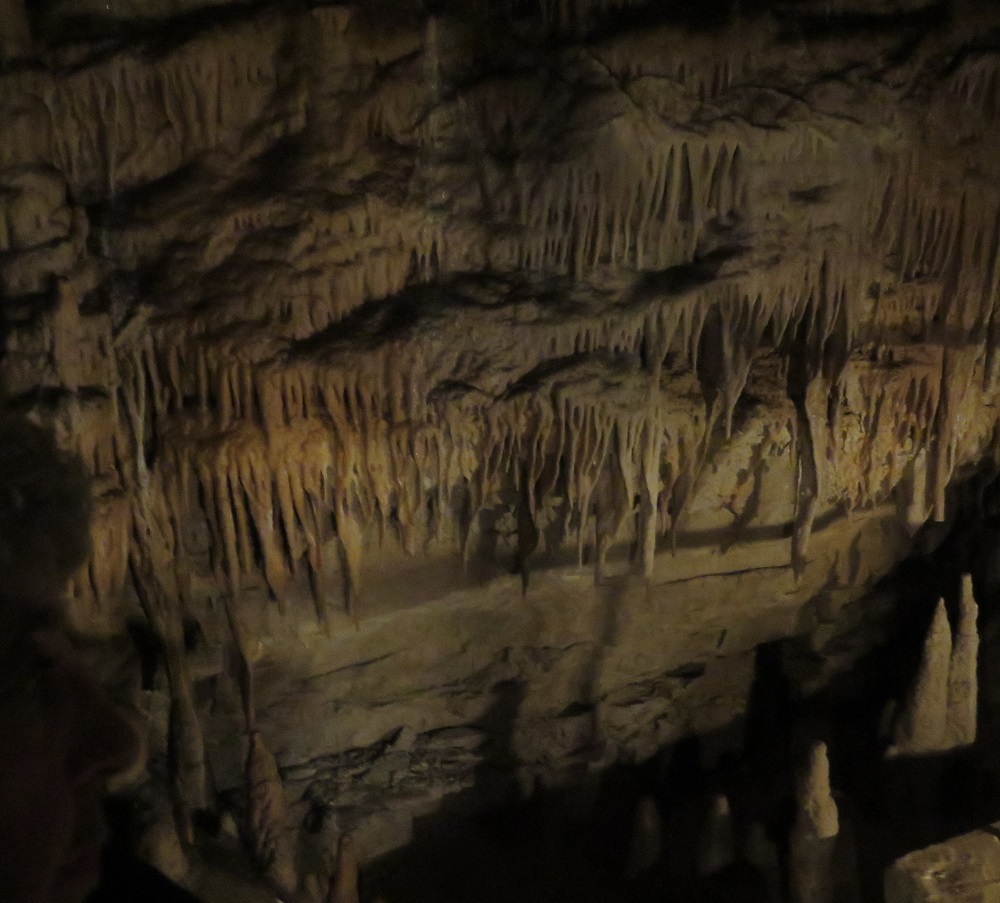 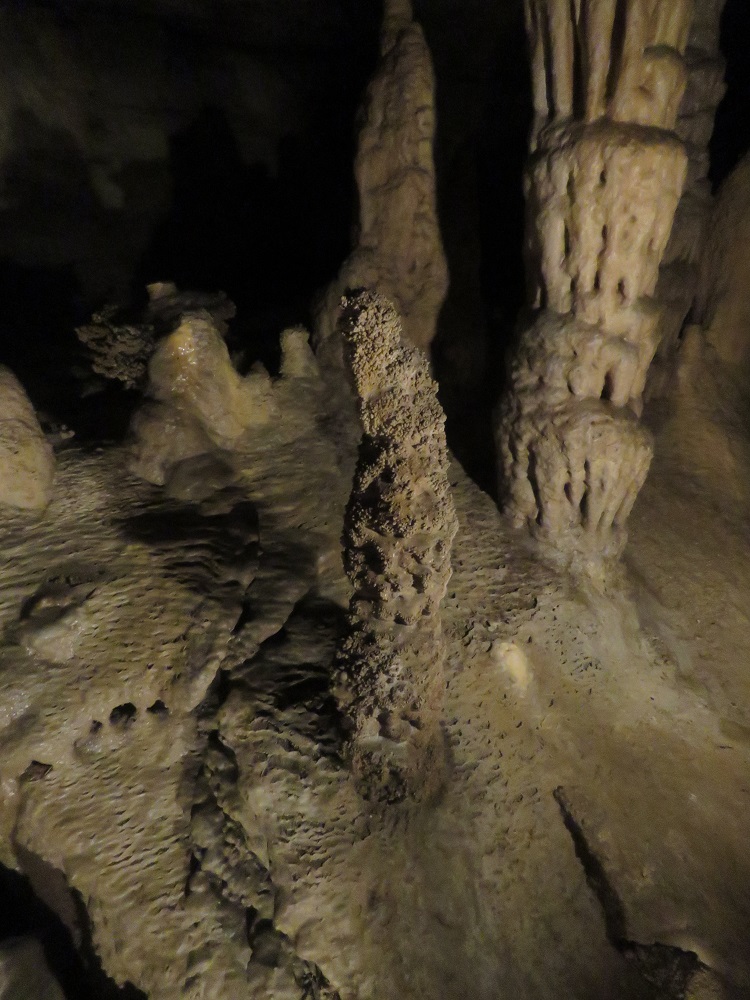 There were interesting formations in the cave. And Miss Lucy had a story for each one of them which we learned while we were on our journey. 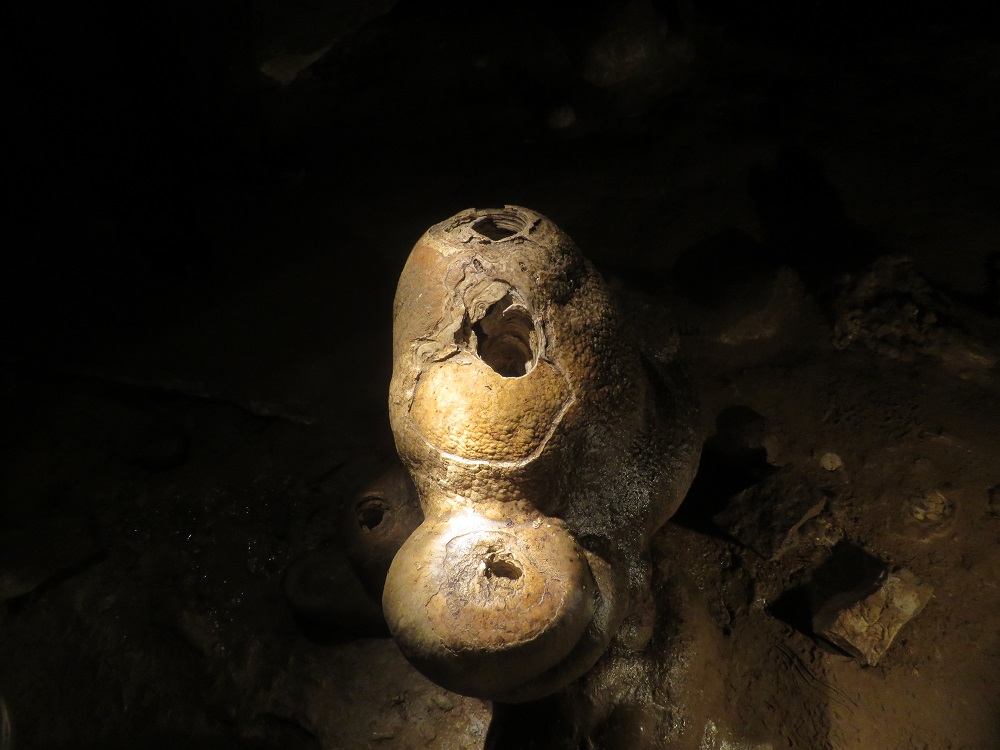 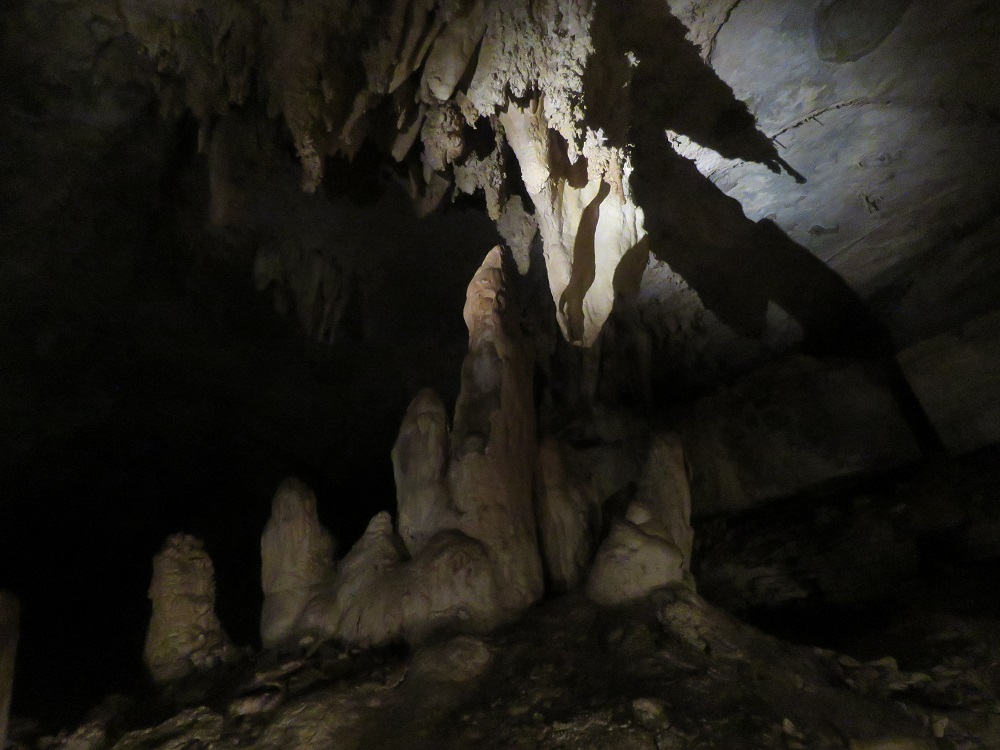 We spent some time discussing the formation of stalactites and stalagmites. 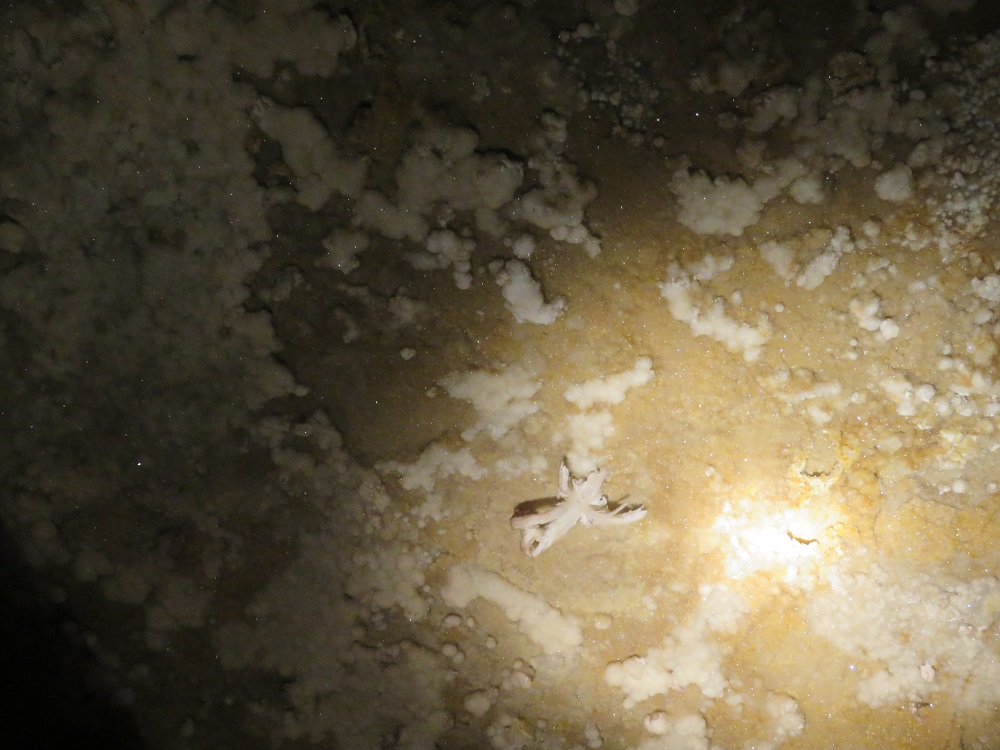 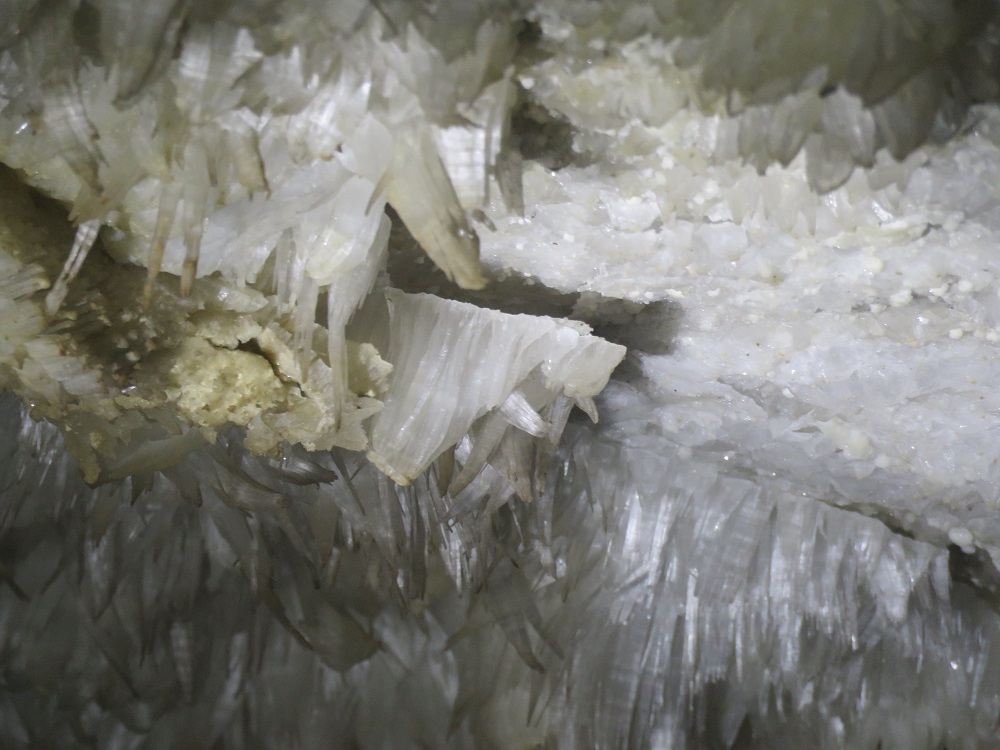 Gypsum on the ceiling in the cave. 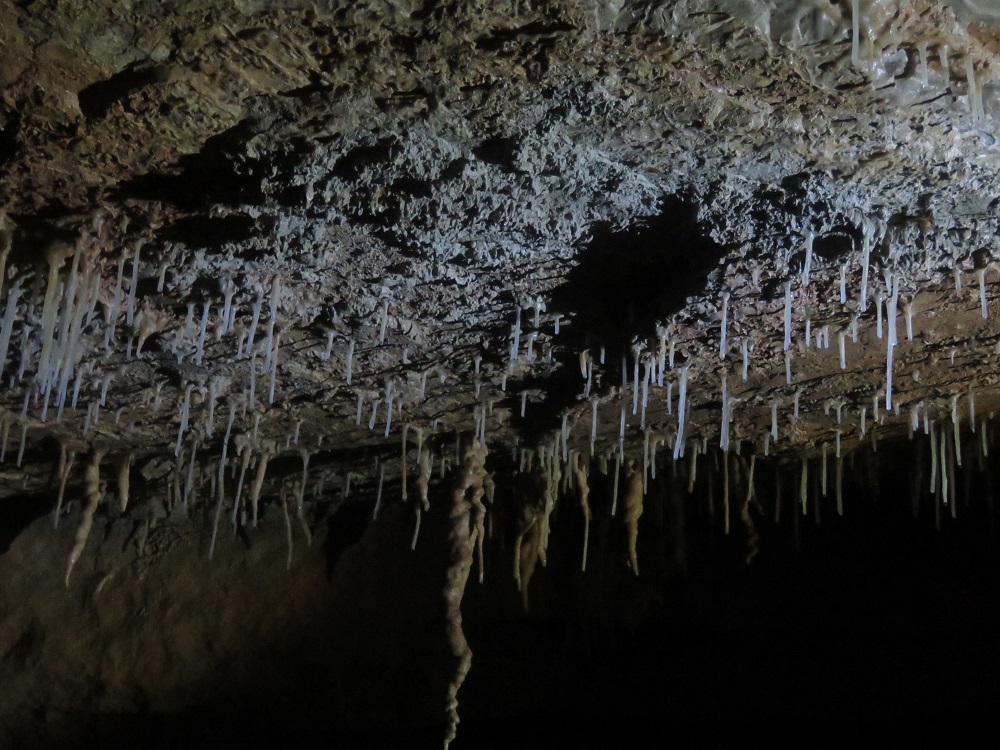 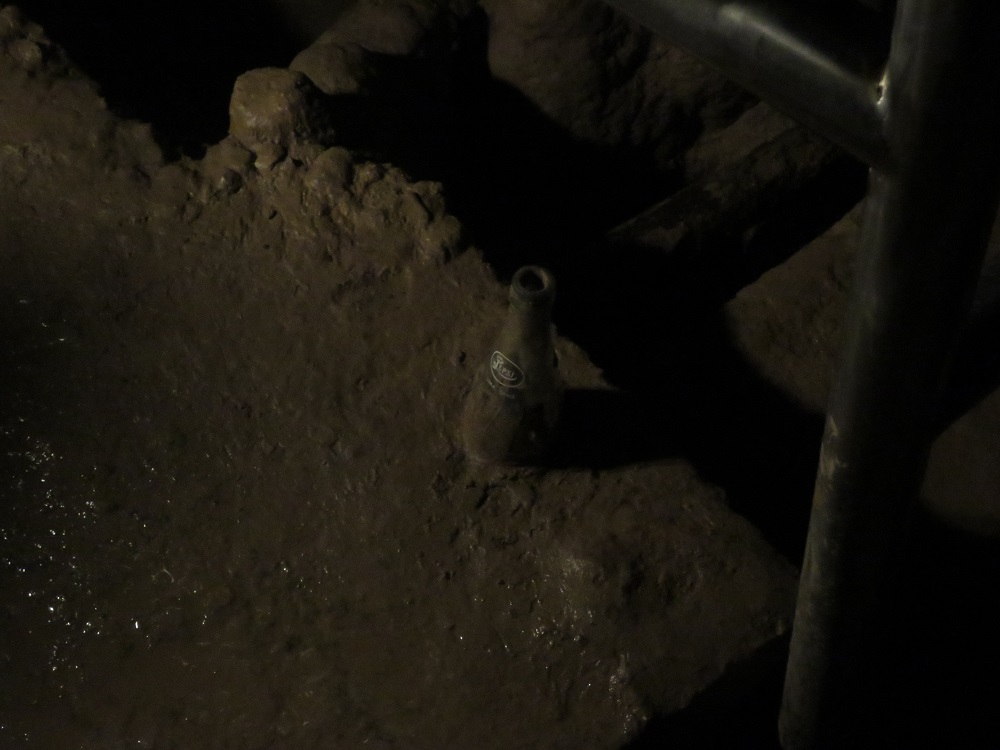 Bottles were used as a placeholder in the addition of posts but this one was accidentally left behind.

All tours conclude with a trip across the bio-security mats to prevent the spread of White Nose Syndrome. On this tour, this takes place after the return trip by bus to the Lodge.