Sitka National Historical Park is Alaska’s oldest federally designated public park. The 113 acres protect the site of a Tlingit fort, the 1804 site of the Battle of Sitka, and a collection of totem poles collected in the early 20th Century.

Sitka National Historical Park was established as a National Monument in 1910, after originally being designated a federal cultural and historic park in 1890 by President Benjamin Harrison to set aside the Tlingit fort near the mouth of the Indian River.

Totem Pole Collection – There are elevent totem poles along this one mile loop trail including the battle of 1804 and the site of the Tlingit Fort. They were collected by an expedition around Southeast Alaska involving Governor John G. Brady and photographer Elbridge W. Merrill. 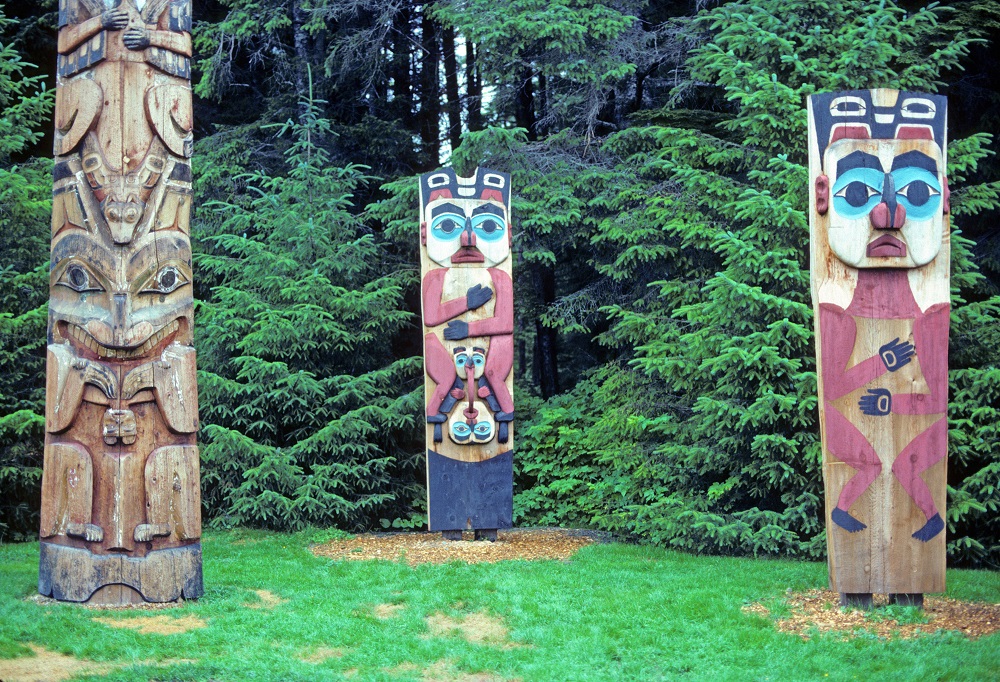 Battle of Sitka (1804) – A battle between the Sitka Kiks.adi and Russian fur hunters near the mouth of the Indian River.

Kiks.adi Fort – A wooden palisade fort built by a powerful Sitka clan house involved in the 1804 Battle of Sitka.

Merrill Rock – a memorial plaque dated 1932 to Sitka’s “Father of Pictures. Elbridge W. Merrill was a photographer attracted to the area by the Klondike gold rush. He was on the expedition to collect the totem poles of the park by Governor John G. Brady, was employed to repair the poles, and was the unofficial custodian of the park after it was designated a national monument.

There is no park entrance fee at the visitor center or the Russian Bishop’s House.

To reach the park from the Cruise ship tender dock in Crescent Harbor, turn right on Lincoln Street and follow it past the Russian Bishop’s House, the Blarney Stone, Sheldon Jackson Museum and Merrill Rock until you reach the Park Visitor Center.

Alaska Raptor Center – This raptor rehabilitation center has 17 acres north of the national historical park and provides medial treatment to about 200 injured birds a year. They are open for tours daily from 8 AM to 4 PM from May through September. The center aims to rehabilitate and release birds but there are more than 20 raptors-in-residence that you can visit who were injured too severely to survive in the wild. Admission tickets are available on their website.

Sheldon Jackson Museum – Sheldon Jackson Museum was founded in 1888 to house a collection of Alaska Native ethnographic material. It bears the name of Reverend Dr. Sheldon Jackson, a Presbyterian missionary and General Agent of Education for Atlanta. It was operated by Sheldon Jackson College until it was sold by the state. It now preserves and exhibits Alaska’s material and natural history. It contains objects from the Tlingit, Haida, Tsimshian, Aleut, Alutiiq, Yup’ik, Inupiat and Athabascan. Much of the collection dates from between 1887 to 1898. It is open daily during the summer.

Blarnery (Baranov) Stone – This legend from Tlingit lore is on your path to the park. Circle Sitka’s Blarney Stone (aka Baranov’s Rock) once for luck.

Russian Bishop’s House – This was once the Russian Mission Orphanage and is one of the only surviving examples of Russian colonial architecture in North America. It was built in 1842 by the Russian American Company for the Bishop of the Orthodox Church. It is now a museum and a National Historic Landmark. It is located at the corner of Monastery St. and Lincoln Street.

Harrigan Centennial Hall Sitka Historical Museum – This city museum preserving the stories and artifacts of the human history of Sitka is run by the Sitka Historical Society. It has over 8000 artifacts, 25,000 historic photos and 100,000 documents from the 1740s to the present.

Sitka is a city of approximately 9,000 people located on the west side of Baranof Island in southeastern Alaska. The city is only accessible by air or sea, and is surrounded by Tongass National Forest. Tongass contains 16.7 million acres in southeast Alaska and is the largest national forest in the United States. Sitka is visited by more than 200,000 cruise passengers over the summer.