Windigo is the entrance point into Isle Royale National Park on the southwestern side of the island. It is located in Washington Harbor and has a NPS Visitor Center, a store and a marina.

Voyageur II – This 65 foot ship provides mail and passenger service to the national park. The trip from Grand Portage, MN to Windigo is two hours one way. The boat also circumnavigates the island. The trip is 5 hours to Rock Harbor, where it stays overnight, and 4.5 hours from Rock Harbor to Windigo. It makes stops at McCargoe Cove, Belle Isle, Daisy Farm, Chippewa Harbor, and Malone Bay. Be sure to arrange your pick up and drop off ahead of time. The schedule varies but it typically operates from early May through early October.

Sea Hunter III – This is a 65 foot twin diesel vessel that provides passenger service to Isle Royale National Park. The trip from Grand Portage, MN to Windigo takes 1.5 hours one way. Visitors on the day trip have four hours to explore the west side of the island. The Sea Hunter typically operates from mid-June through Labor Day.

There is a store run by Rock Harbor Lodge which is located at the top of the hill past the visitor center. It is open from mid-June through early September and sells groceries, camping supplies, fishing tackle, gifts and other items.

There are shower and coin-operated laundry facilities near the store. They sell shower tokens for the facility at the store and rent towels for the showers.

The marina offers gas and boat rentals (but they do not rent kayaks overnight). Prices for boat rentals are on the Rock Harbor Lodge website.

Beaver Island Campground – This is a three shelter campground on an island in Washington Harbor that is canoe/kayak accessible.

Feldtmann Lake Campground – There are five individual tent sites and two group tent sites off the Feldtmann Ridge Trail on the southsest side of the lake.

Huginnin Cove Campground – There are five individual tent sites on the north shore of Isle Royale off the Hugunnin Loop trail.

Grace Island Campground – There are two shelters on this island outside of Washington Harbor which has canoe/kayak access and a boat dock.

Siskiwit Bay Campground – There are four individual tent sites, two shelters, and three group tent sites on the southwest corner of Sisikiwit Bay along the Island Mine and Feldtmann Ridge Trails. 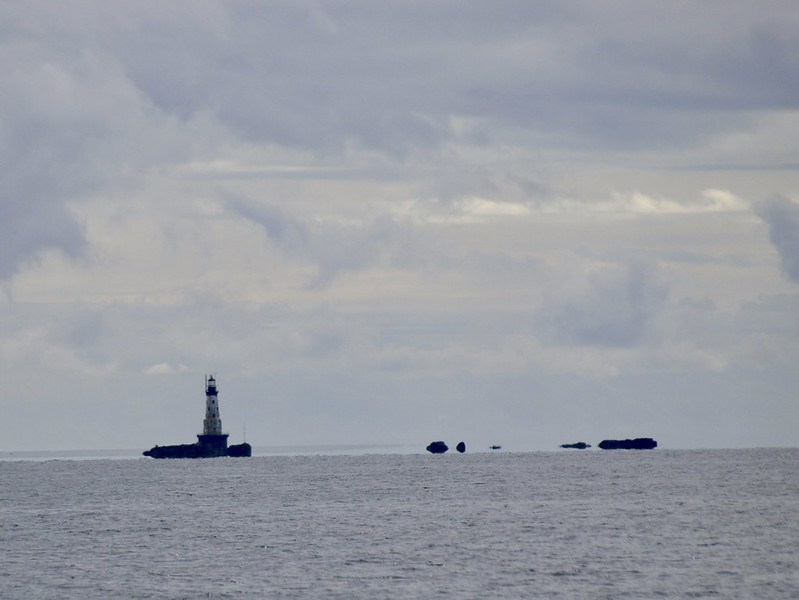 This is a 1908 lighthouse that stands 137 feet tall and is located around 2.25 miles west of Washington Island and 3.5 miles west of Isle Royale. It is one of the most remote lighhouses on the continent. Its warning light provided a double flash marking the western passage of Isle Royale every ten seconds and could be seen for up to twenty miles. The original second order Fresnel lens is on display at the visitor center. In 1985, the Coast Guard installed a battery-powered solar beacon.

Windigo Nature Trail: This is a 1.2 mile self-guided loop through the forest which begins up the hill past the Visitor Center.

Grace Creek Overlook: This is a 3.6 mile roundtrip hike along Washington Harbor via the Feldtmann Lake Trail which begins near the dock. A rocky outcrop on a spur trail leads to the Grace Creek Overlook which provides views of Grace Harbor and the island.

Huginnin Cove Loop: This is a scenic 9.4 mile roundtrip trail that reaches the northern shore of the island providing views of Canada as well as the remains of a historic mine.

Greenstone Ridge Trail: A 40 mile long hiking trail on the island’s spine between Windigo on the west end of the island and Lookout Louise or Rock Harbor on the east side. This trail has the greatest elevation changes on the island and backpackers hiking the length of the trail will climb Sugar Mountain, Mount Desor, Mount Siskiwit, Mount Ojibway and Mount Franklin. There is minimal water along the trail so be sure to fill up plenty of water bottles when available. As you are above the treeline, you have great views but also are exposed to the sun during the summer days.

Minong Ridge Trail: Minong is the toughest trail on Isle Royale and perhaps the hardest hike in Michigan. It stretches 28.5 miles from McCargoe Cove to Windigo on the north side of the island. It was cut to allow firefighters access to the north side of the island and left relatively undeveloped when opened up to park visitors. It is a four day hike with campsites at Todd Harbor, Little Todd Harbor and North Lake Desor. For a shorter trip from Windigo, the Minong Ridge Overlook is a six mile roundtrip from the visitor center.

Rock Harbor Lodge also takes reservations on two one room cabins located in Washington Harbor. These cabins are located in Windigo (approximately 45 miles from Rock Harbor Lodge). They offer electrical outlets, 2 bunk beds with mattresses, a futon sofa and table/chairs. The cabins do not have indoor plumbing. The 2016 rate was $51.95 a night.

The Wendigo Mining Company brought more than 100 people to the island in the early 1890s in order to search for copper. A workable deposit was not found and the area was converted to a private retreat, serving as the Washington Club for a group of Duluth businessmen. The remnants of a copper mine are along the Huginnin Cove Loop.