The Anhinga Trail is a paved walkway and boardwalk in Everglades National Park that runs over a freshwater sawgrass marsh (Taylor Slough). It is known as one of the best places with easy access to photograph wading birds and alligators because of their numbers and their tolerance of people on the boardwalk. 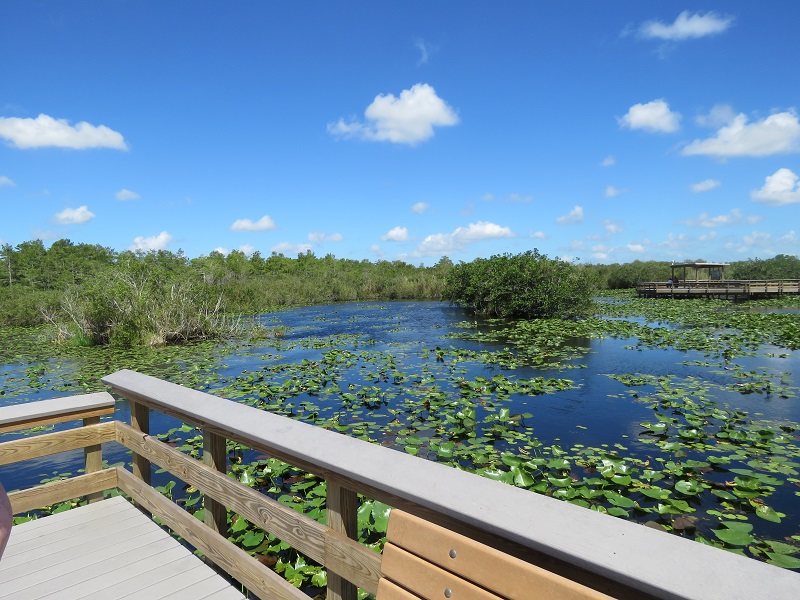 It is just under a half mile to a series of viewing platforms that allow you to see out over the anhinga nesting area. Round trip, it is a .8 mile trail. The Royal Palm Visitor Center is at the start of the trail and there are a few ranger-led walks leaving from the center during the day. You can see Royal Palm and the Anhinga Trail on the right side of the park in this portion of the map. 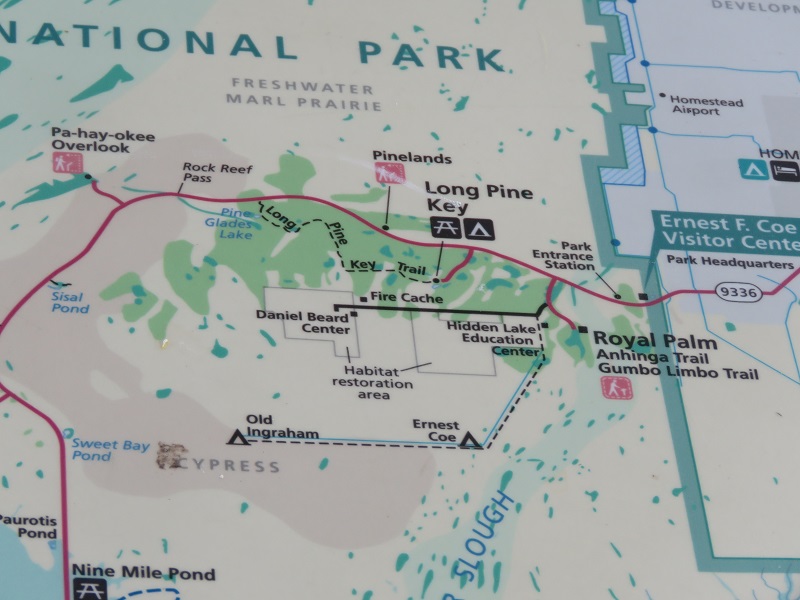 Here is a map of the trail: 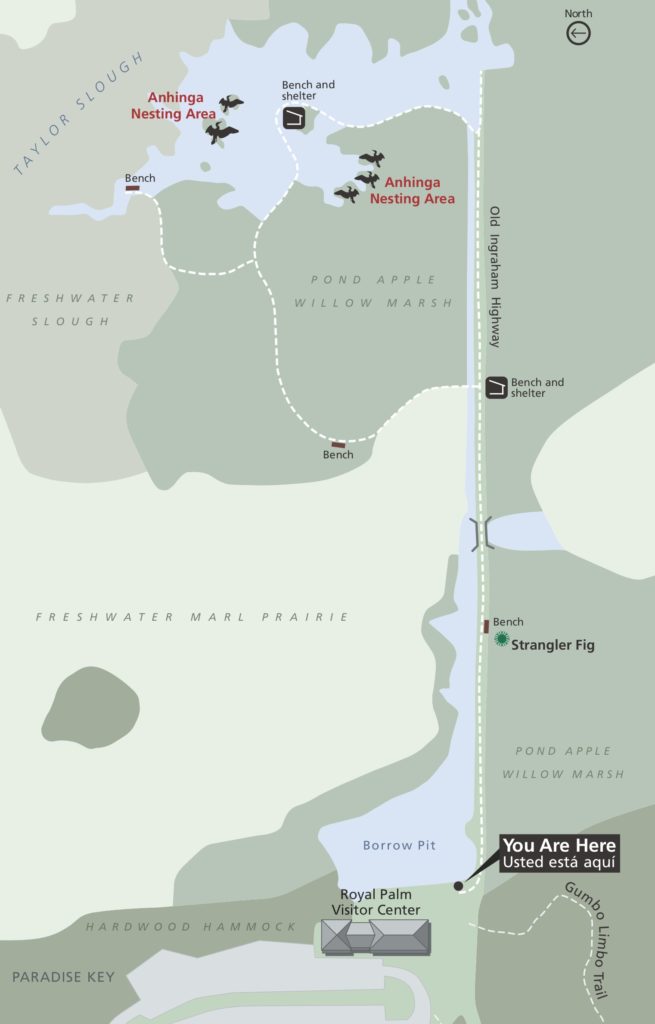 The trail is named for a diving bird that nests here. An anhinga is a dark water bird with long thin neck and long tail that is found in swamps in the Southern United States. We saw a few in Shark Valley as well as one at Disney Springs (formerly Downtown Disney). The anhinga has trouble flying while its wings are wet, so you will see them sunning themselves to dry off. They are also known for swimming through the water with only their long neck and head protruding. 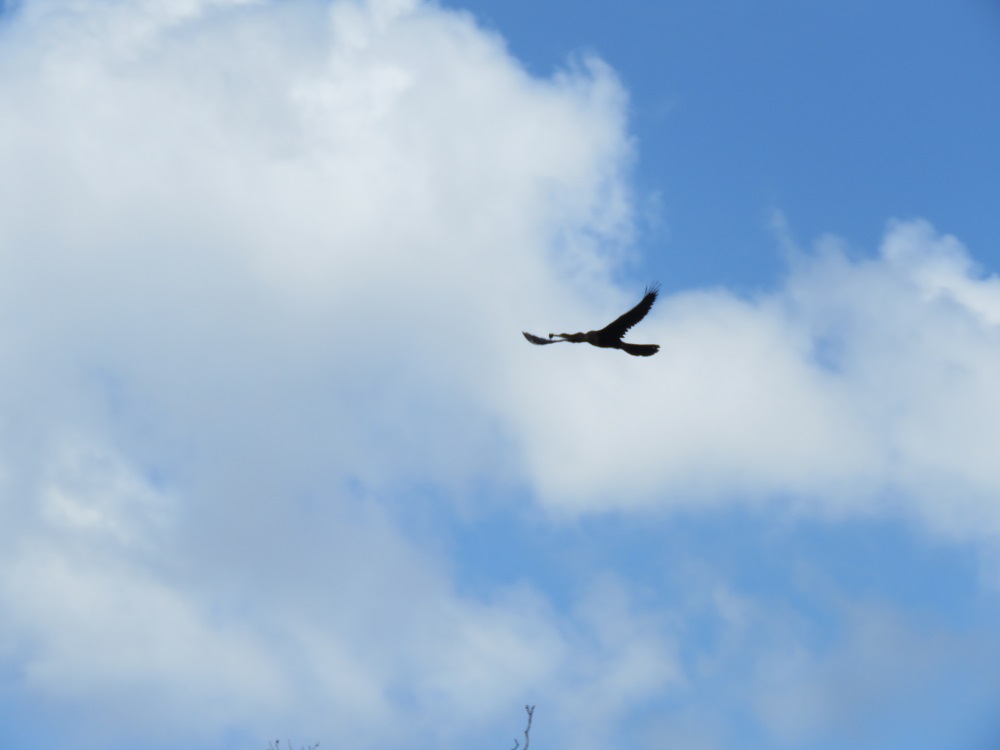 (The above is one that we saw earlier in the day during the Tram Tour flying over Shark Valley.) 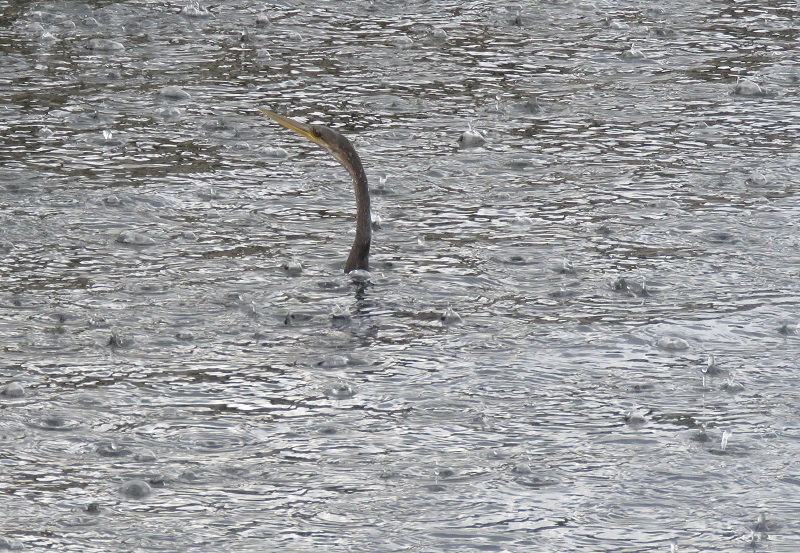 (We saw this one swimming with only its neck out in the Orlando area in the rain – not in the Everglades.)

If you are lucky, you will see one sitting drying its wings in the South Florida sun like this one (below) was doing on the Anhinga Trail boardwalk hand railing. 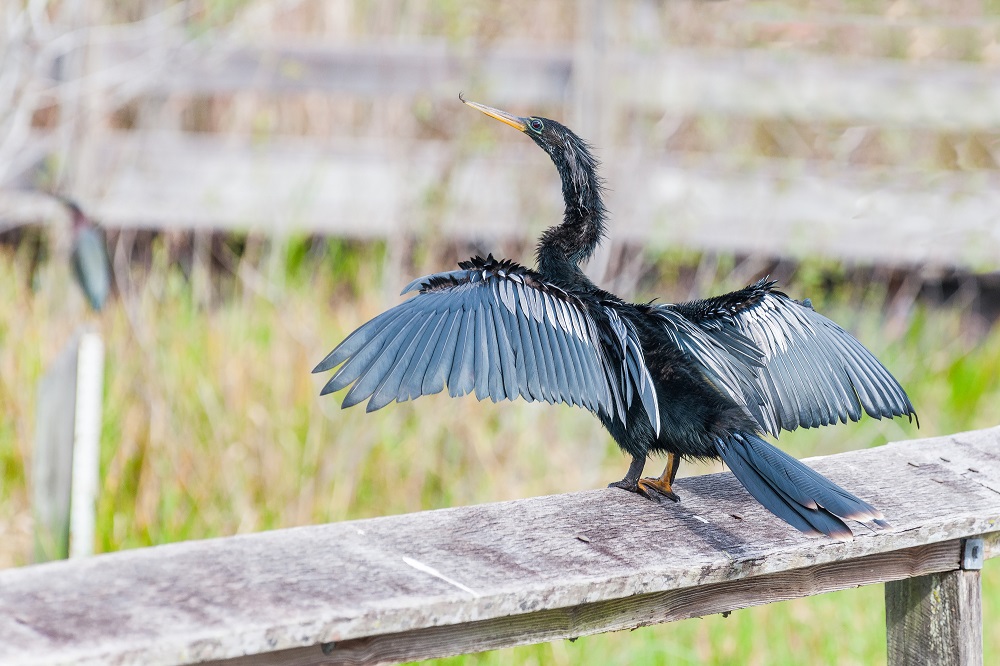 They are a lovely sight when drying their wings. We managed to see one two years later drying its wings while on the Everglades boat tour. We also saw one earlier that year in Congaree National Park through the telephoto lens on our Canon SX60.

The Anhinga Trail also have a variety of other wildlife, including alligators, some of the largest grasshoppers I have ever seen, and fish. It is also known for its wading birds. 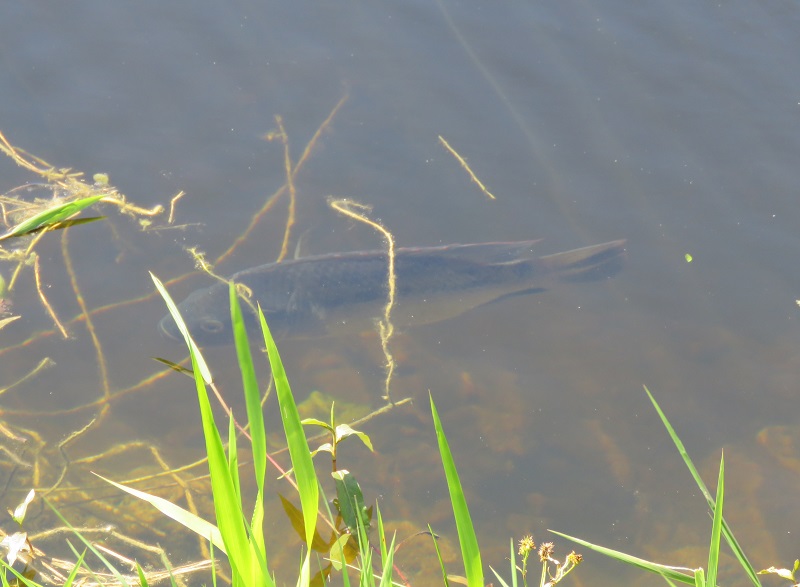 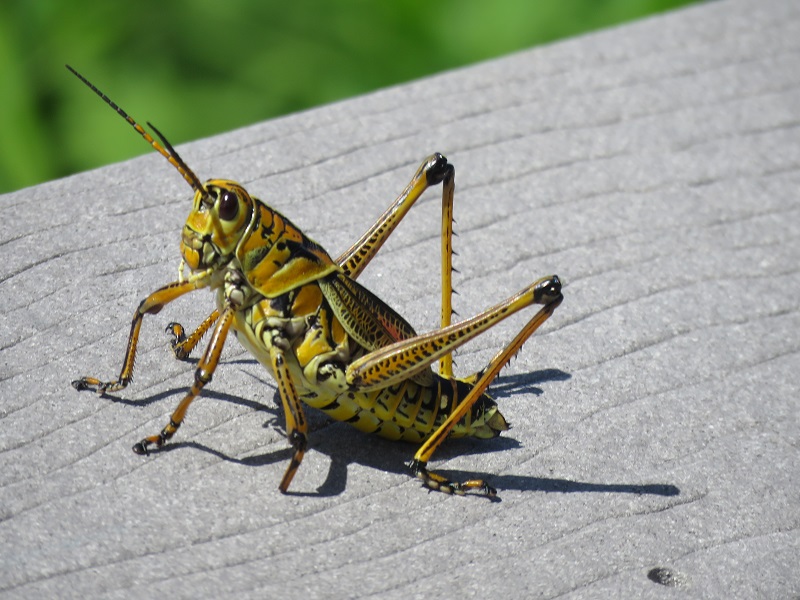 We came to the Anhinga Trail in the heat of the day in the summer after an action packed trip with the Shark Valley Tram Tour. We were a little disappointed because we had high hopes to get some good photographs of birds and yet didn’t see a single wading/diving bird. We also baked in the sun. We definitely saw the appeal of visiting the Anhinga Trail though – it was beautiful. So we’ll just have to come back in the winter and try again. 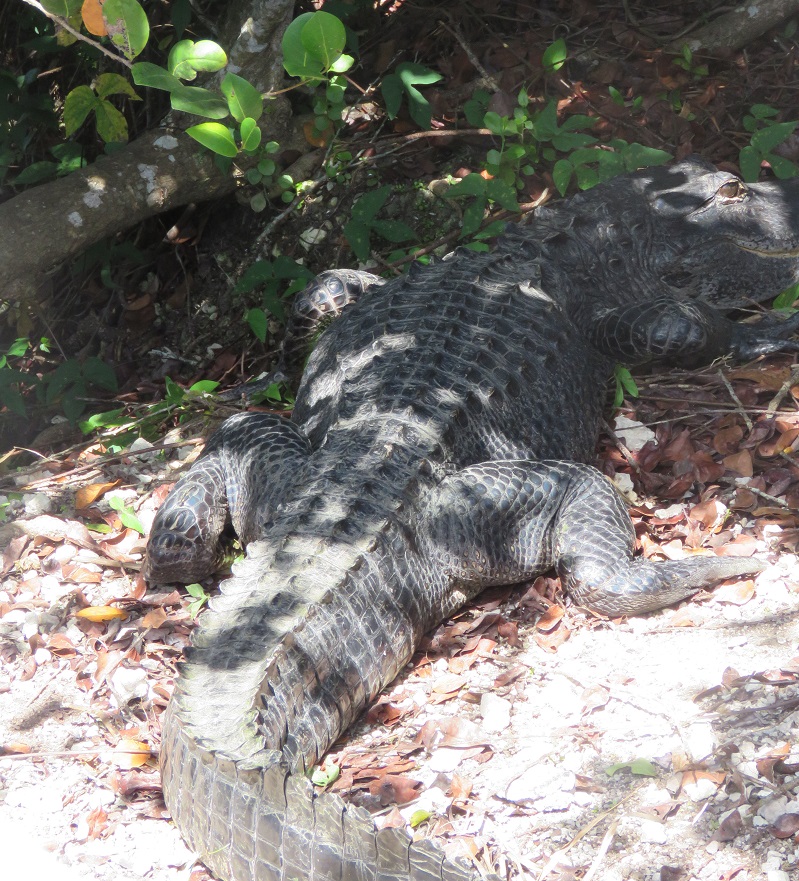 One of the coolest parts of our stop here was seeing a huge alligator basking in the sun right next to the boardwalk. We saw a few alligators swimming while we were at Shark Valley, as well as a few babies along the side of the road, but this was our first up close and personal encounter with an adult alligator.

How much time does it take to walk the trail? We would plan for a total visit time of approximately one hour. We walked at a leisurely pace looking for birds and gators, and we completed the trail easily in under an hour. If you actually do see birds in the marsh at the viewing platform, you may want to stay longer and observe. 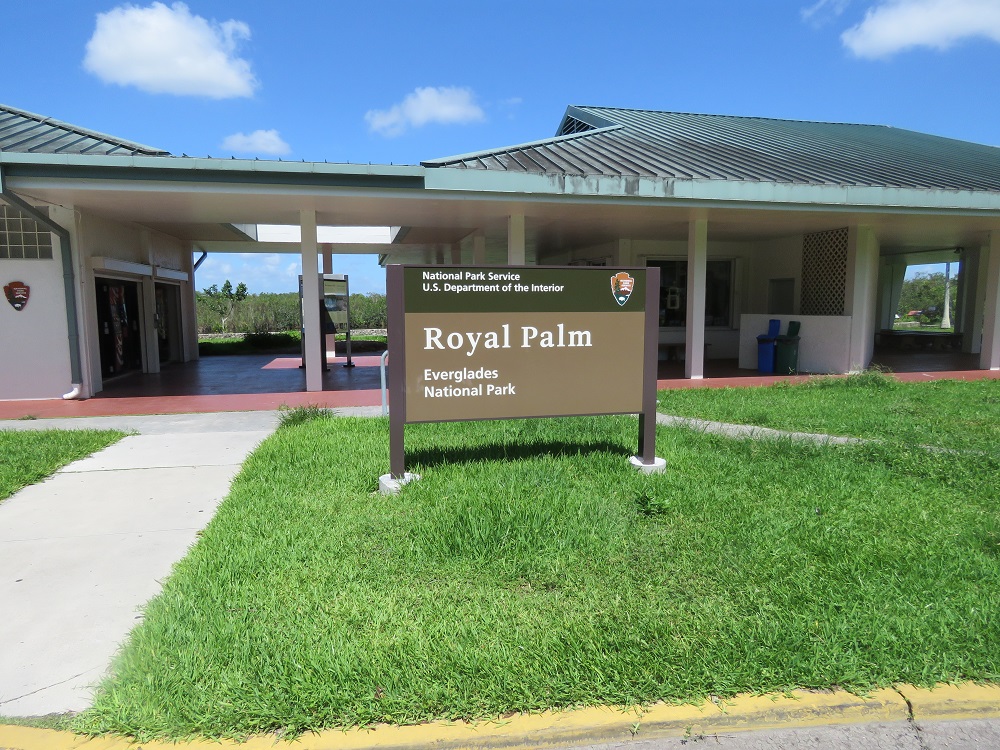 The Royal Palm area is the first major section of the park after the Ernest Coe Visitor Center at the Homestead entrance. This information station and bookstore are a little over a mile from the Homestead entrance to the park. Ranger-led walks and other events are conducted here. You will see the sign at the turnoff pointing you in the right direction. 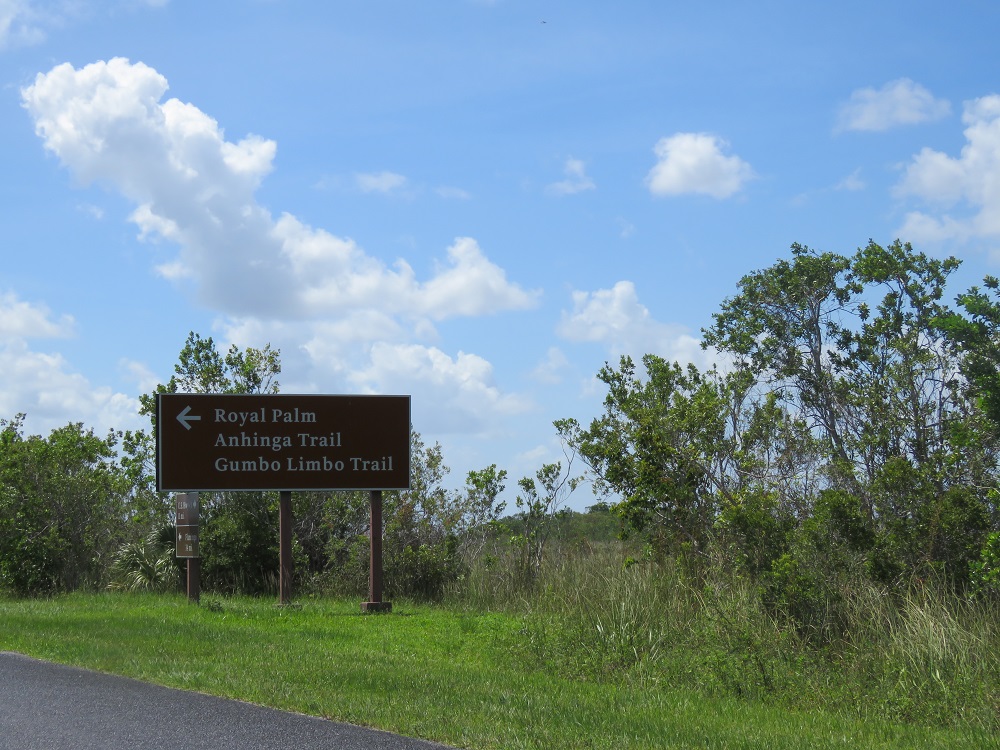 The trail begins from the back of the visitor center and continues on a long paved section toward the boardwalk. There are a few benches along the way to rest. This photo was taken on our way back through this section and is looking back towards the visitor center. 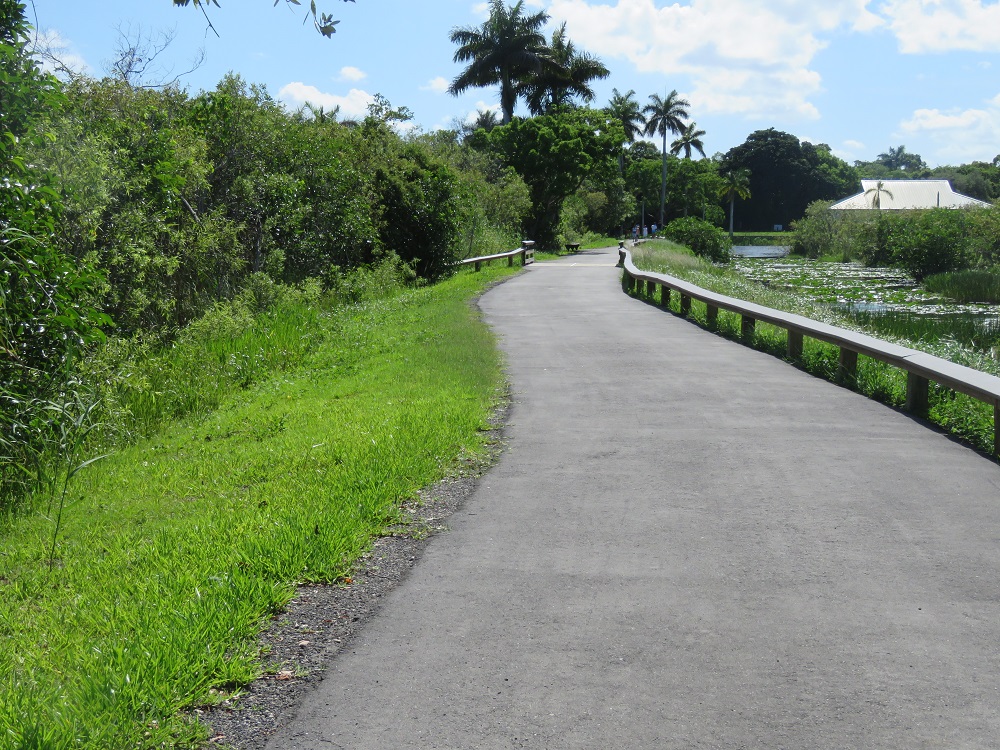 You can see the view here (below) across the prairie. It was a beautiful day with almost endless blue skies. 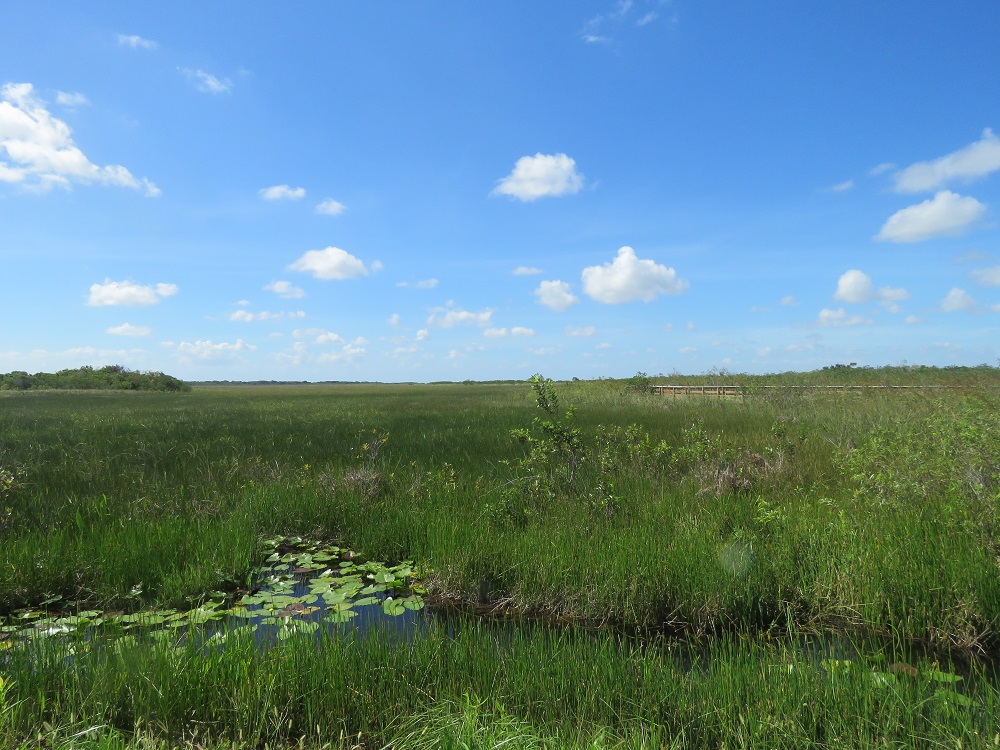 The paved section leads to the boardwalk. There are several observation points on the boardwalk that provide a better view of the area for wildlife and bird viewing. 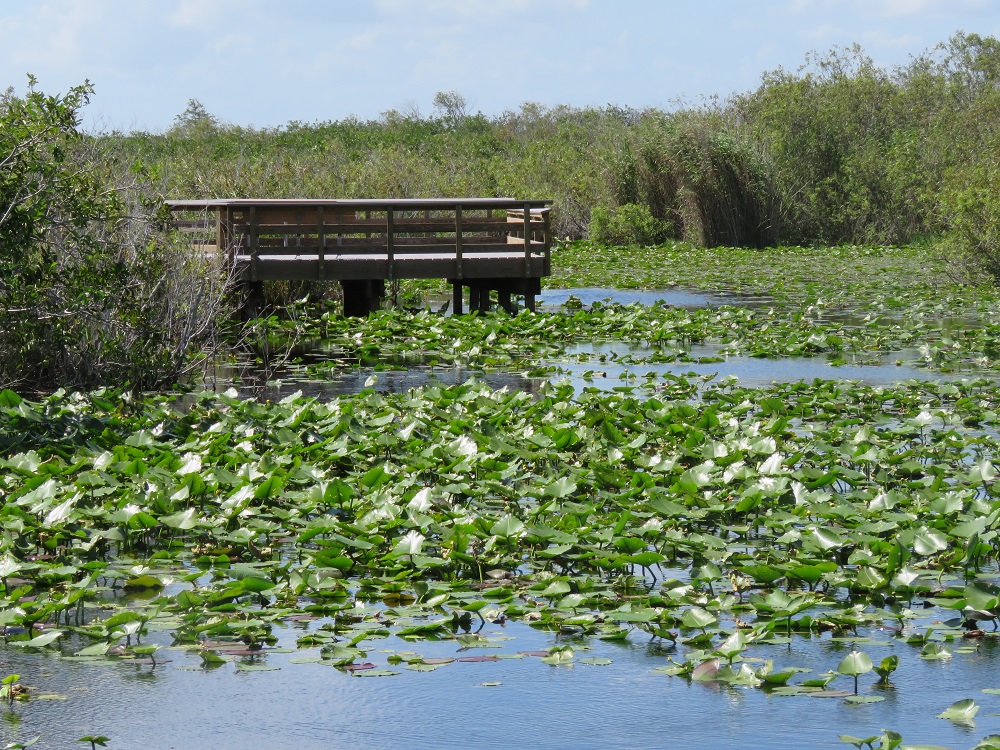 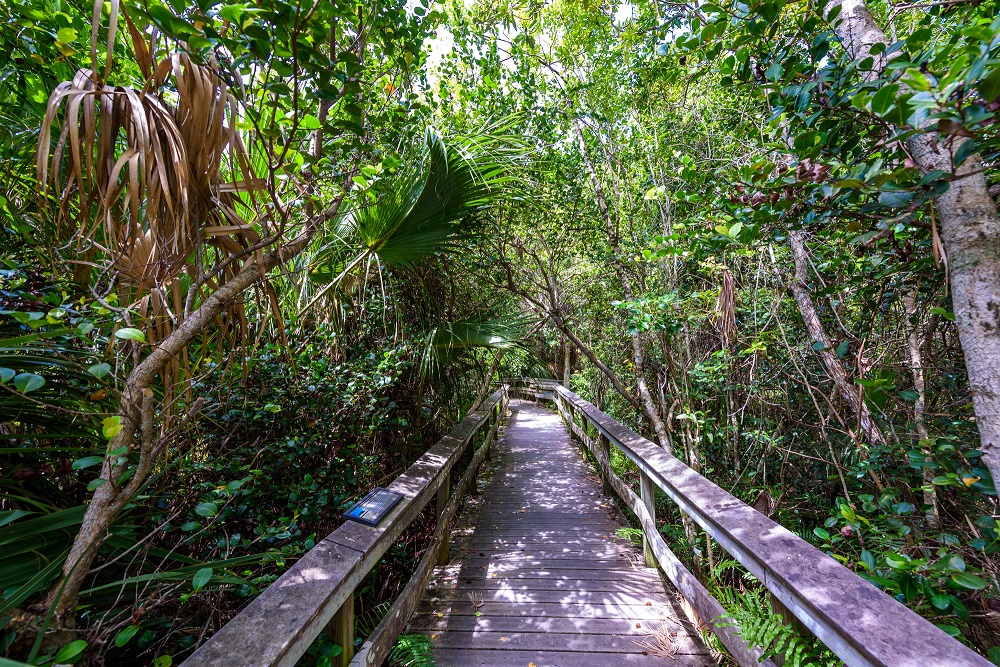 You can also access the Gumbo Limbo trail from the parking lot here. Gumbo Limbo Trail is a short half mile trail including a paved section and boardwalk through a hammock of gumbo limbo trees as well as royal palms and ferns. This hardwood hammock demonstrates how a small change in elevation (2-3 inches) in the Everglades can create an entirely different ecosystem. 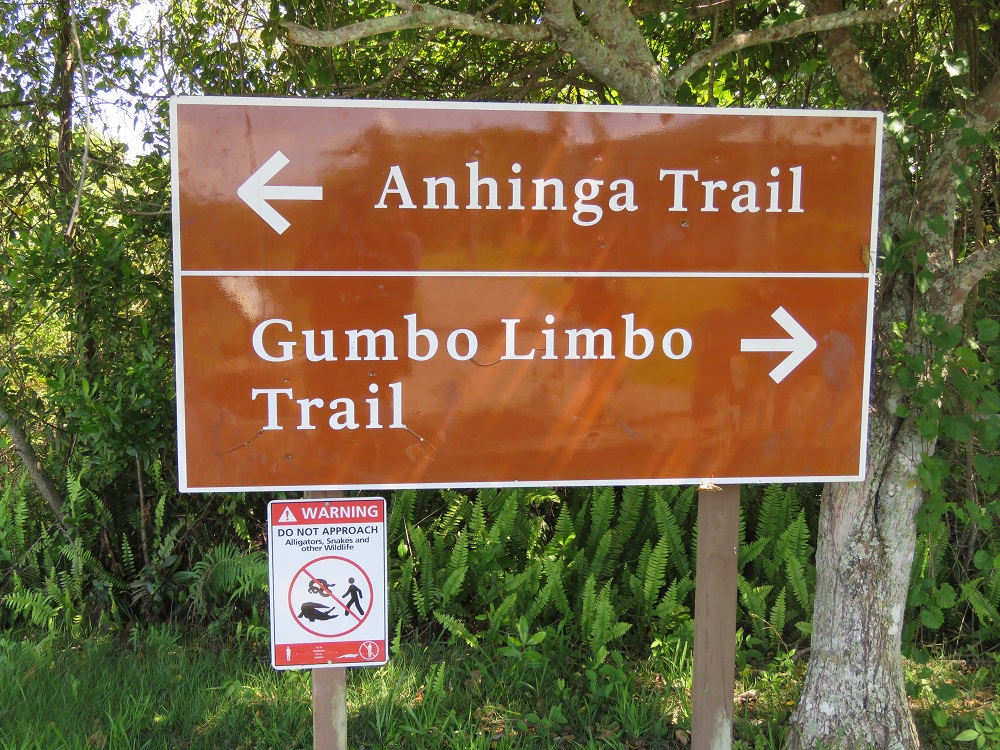 The trail is named for the gumbo limbo tree. The gumbo limbo is a tropical climate tree native to South Florida, the Caribbean and northern South America that can grow to about 50 feet or more. It is also known as the Tourist Tree because its peeling red bark reminds many of a sunburn. Gumbo limbos drop some of their leaves seasonally or during drought conditions before regenerating them.

The trial crosses the Old Ingraham Highway, which was the first motorway to Flamingo. Construction of the road began in 1916 and was completed in 1922. It was named for James E. Ingraham, who was integral in the establishment of Royal Palm State Park (the precursor to Everglades National Park) in 1916. The Ingraham Highway is now used for backpacking and is closed to cars. 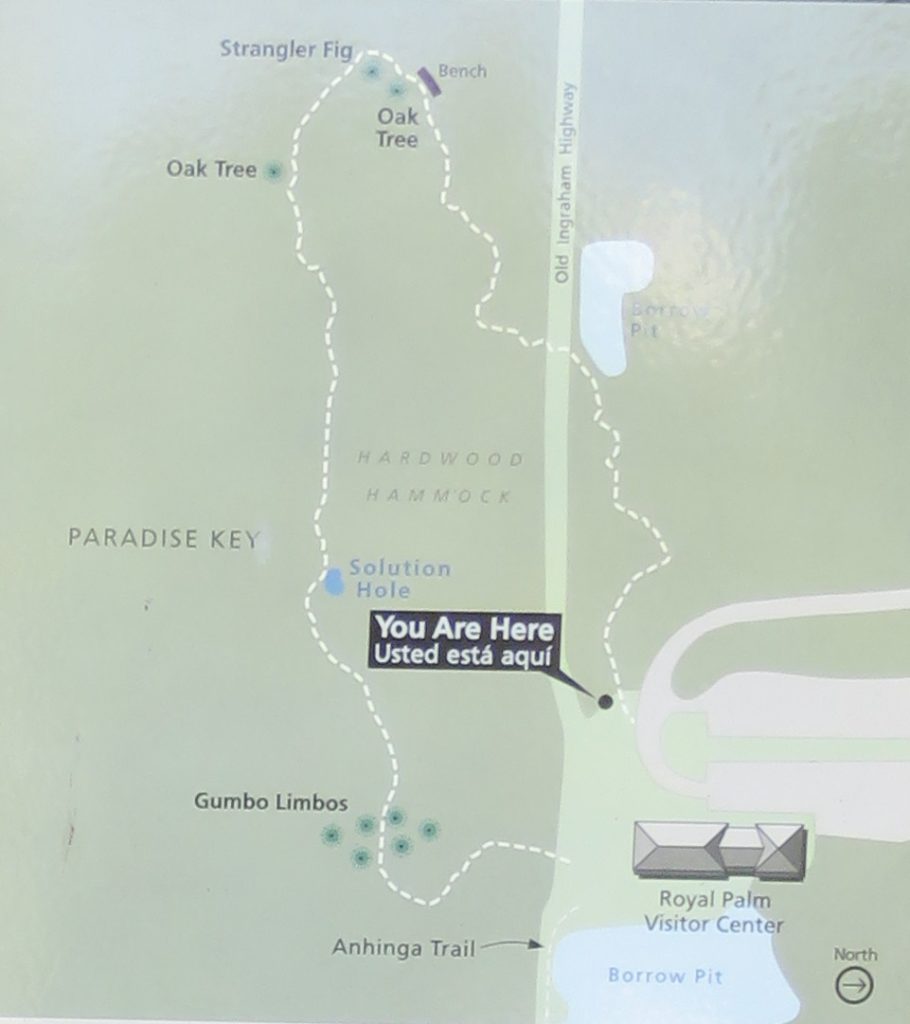