We made the day trip to the Dry Tortugas National Park in late June and were fascinated by the birds – primarily the magnificent frigatebirds, pelicans, terns and noddy.  We missed the Dry Tortugas spring migration from March through May but we were there during the sooty tern nesting season over the summer.  It was crazy the amount of birds that were there even in the summer, and we got some great photos with our Canon SX60 while touring Garden Key and occasionally doing some Dry Tortugas birding.

Dry Tortugas is a popular place to visit for birdwatching during the spring bird migration in mid to late April and early May. It is the primary stop over as the birds cross the Gulf of Mexico.

If this is the primary reason for your park vacation, you should consider one of the birding trips that will take a private boat charter and stay in the park for several days. You will find there are a number of Dry Tortugas birding tour options every year. We have seen trip reports from three day tours to the park which have indicated 60 to 90 different bird species were seen on three day trips.

On our own one day trip during the summer (after we were hit by the park bug but before we really started birding in earnest) soon after the lighthouse on Loggerhead Key and Fort Jefferson came into view, we started to see the seabirds.  As we approached Garden Key (where the Fort is located), we saw plenty of birds flying around as well as sitting on the old dock. 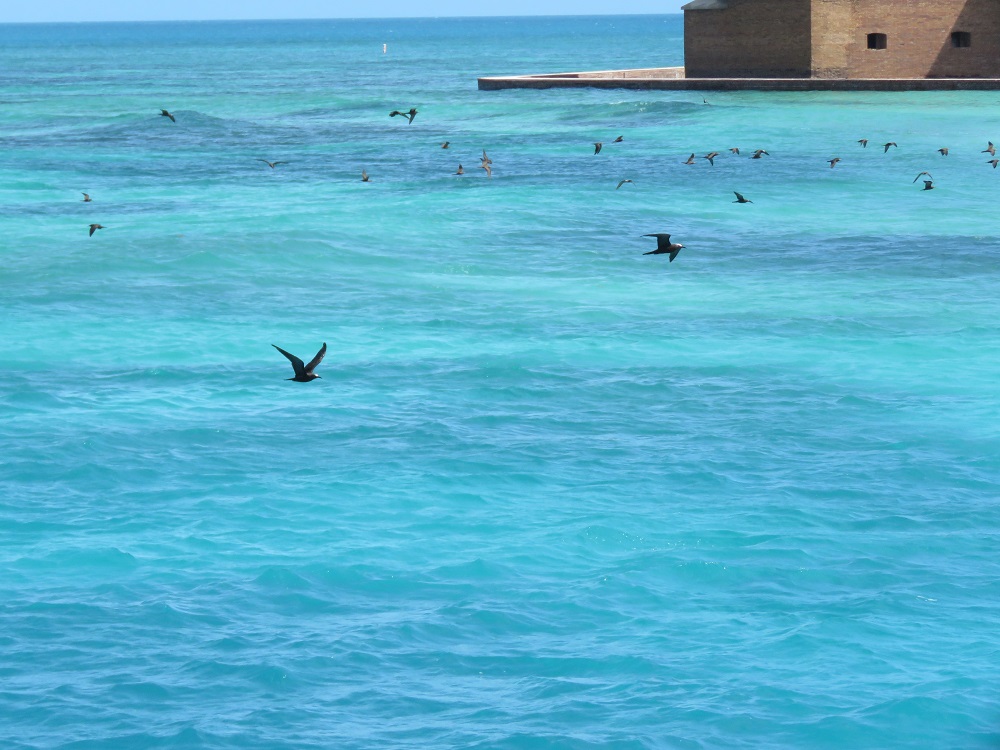 We even had a brown pelican welcome us as we docked and got off the boat.  It made a great picture with the sign for the Dry Tortugas National Park in the background.  This was taken from the Yankee Freedom III. 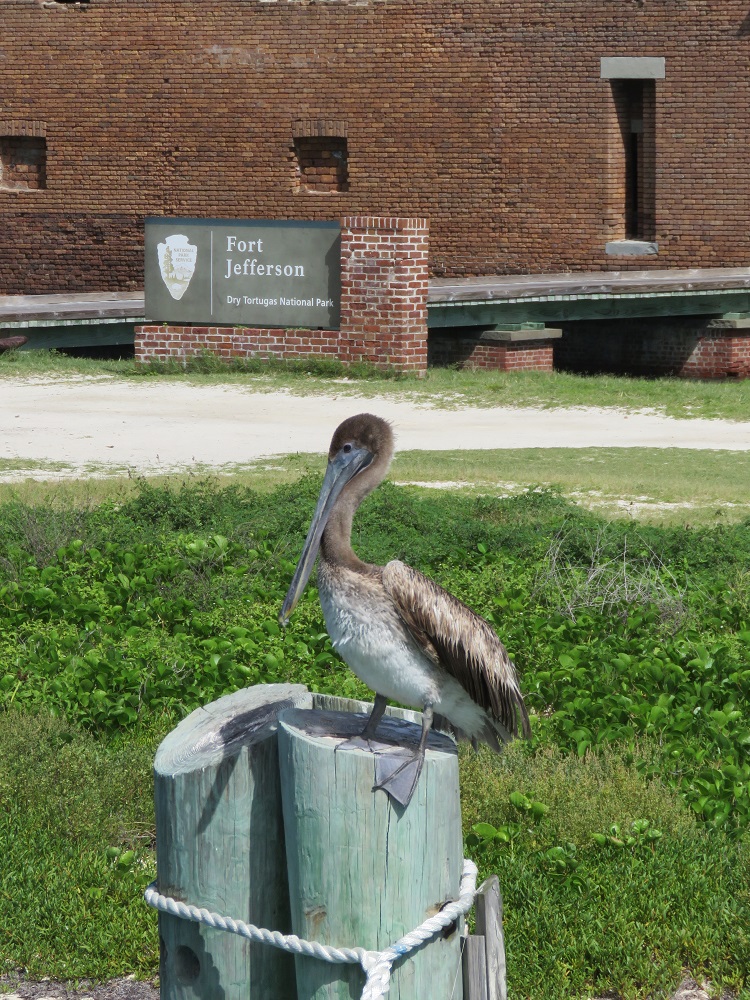 The next set of birds that we saw were the magnificent frigatebird gliding over Fort Jefferson.  They have an impressive seven foot wing span and are easily identifiable against the blue sky over the Gulf of Mexico.  Long Key contains the only current nesting colony in the continental United States – they have been nesting there since around 1988. 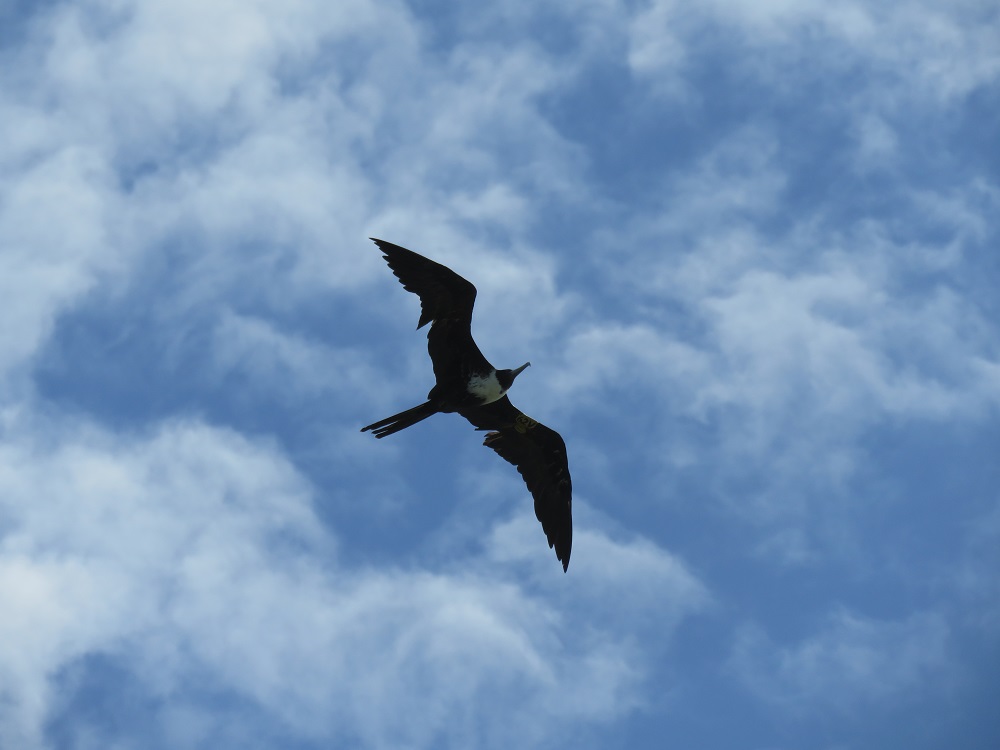 To give you some idea of how high over the fort they soar, we took a few photos without using the telephoto lens on our camera:

We didn’t identify any sooty terns with the naked eye but they were definitely present over Bush Key.  Bush Key is closed to humans during the nesting season.  There are a crazy number of birds and you can hear them anytime you are on that side of Garden Key. 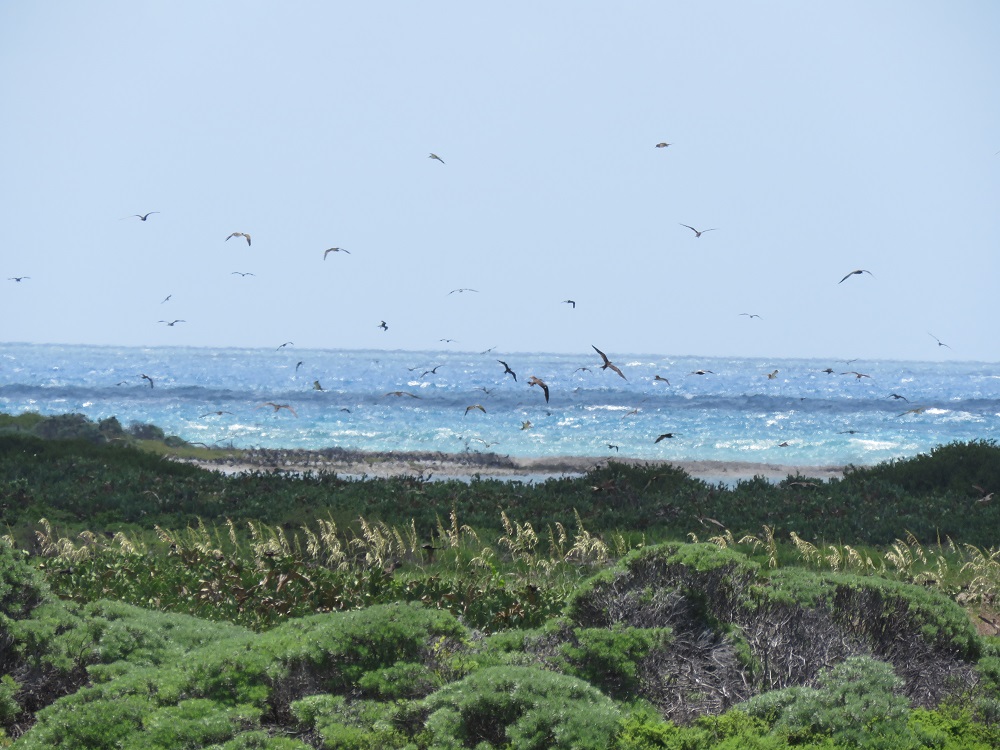 About 80,000 sooty terns nest annually on Bush Key, the only important breeding colony for them in the continental United States.  By August, this colony will have disappeared.  I zoomed in on one of the high resolution telephoto pictures (not shown here due to size/download constraints), and you can definitely see the markings of sooty terns. 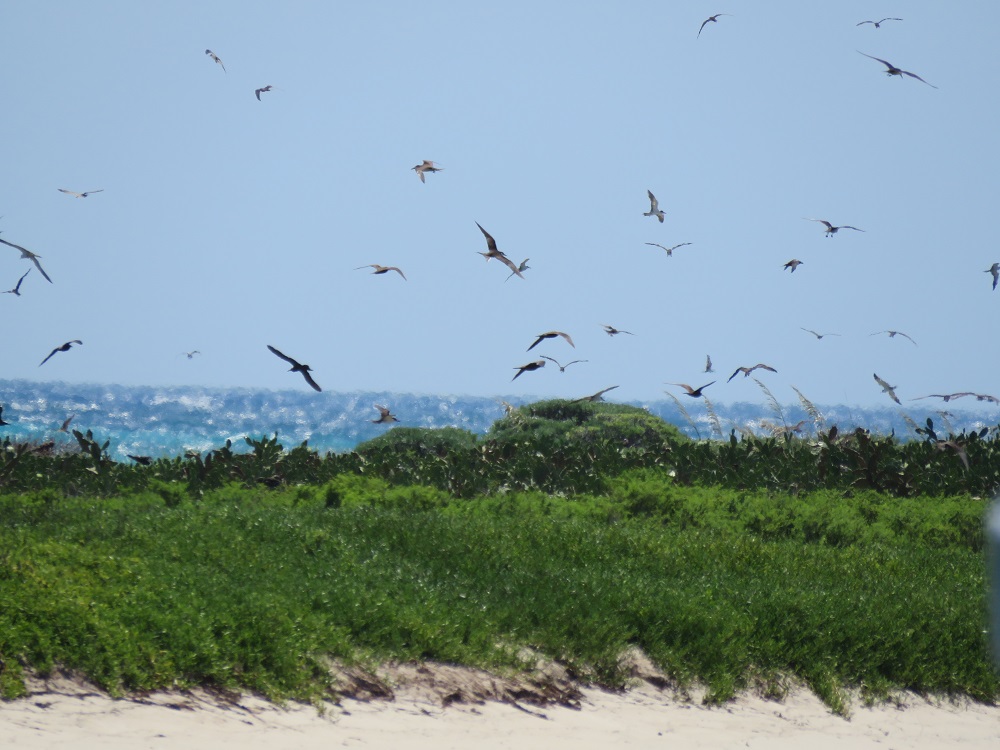 We also saw cattle egrets inside the fort.  We had just seen them in the Everglades but we didn’t know we would also see them here. 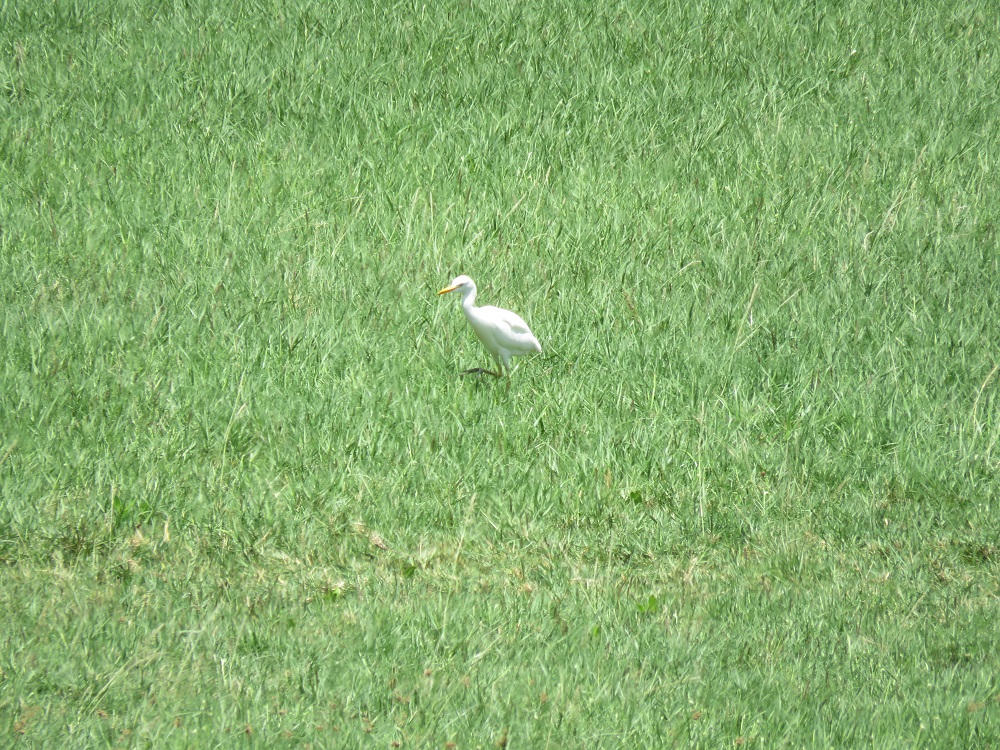 The brown pelican on the dock wasn’t the only one that we saw during the time that we were there.  We saw them both in flight and on the old dock posts.  Here are two others that we saw that day and managed to photograph: 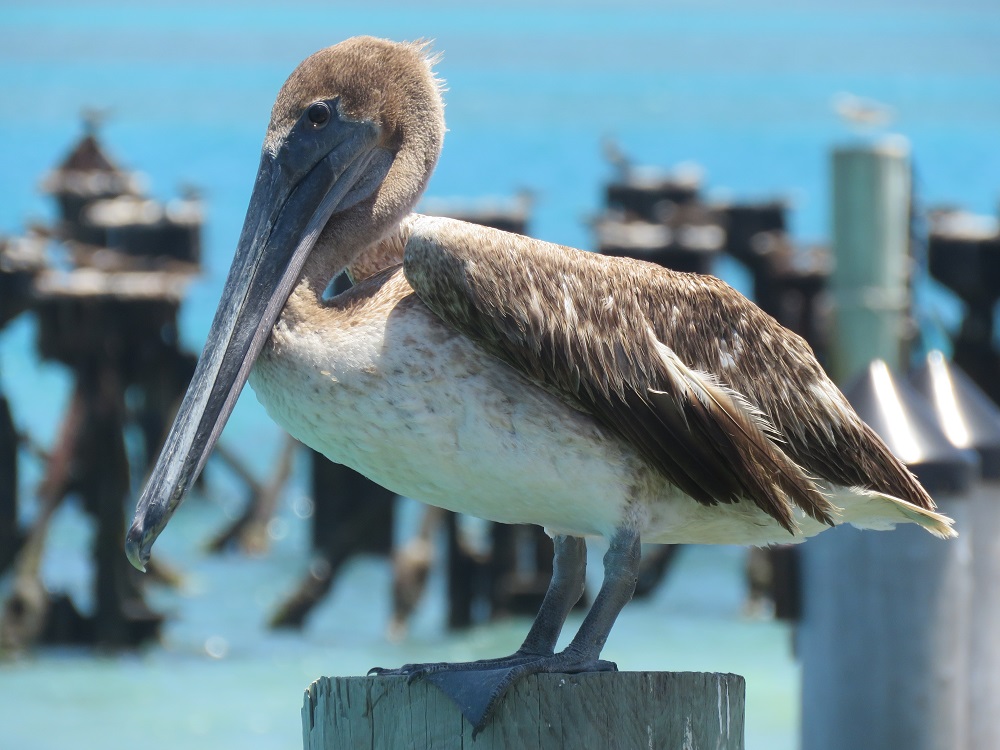 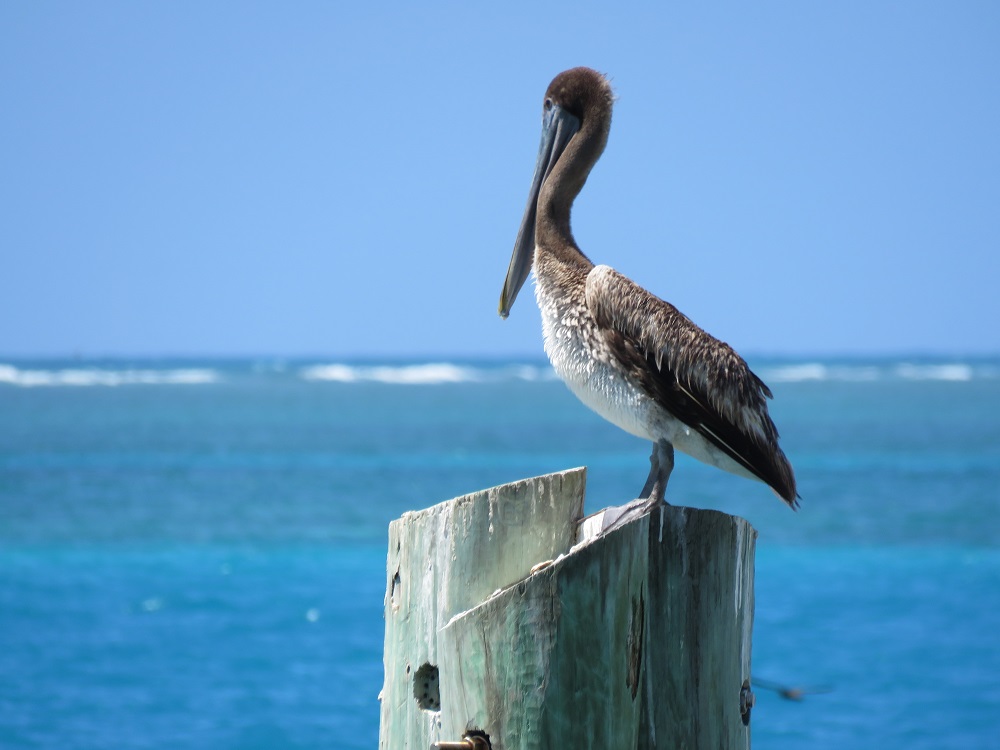 We were only on the island for a few hours, so we didn’t have a ton of time to dedicate to bird-watching.  We are definitely planning to go back – so we will have more bird photos from the Dry Tortugas for you then!