Glacier Bay National Park and Preserve in Alaska is home to snow covered mountain peaks, huge glaciers and humpback whales. Located in Alaska’s panhandle west of Juneau, it was declared a national monument by President Calvin Coolidge in 1925 and designated a national park in 1980.

The Tlingit people have occupied the area of Glacier Bay for countless centuries, living among the glaciers, and using all they could pull from the land and sea to survive. In 1794, Captain George Vancouver sailed the aera, sketching a map that showed a single giant glacier in the bay. In 1879, John Muir, with the help of Tlingit guides, explored the area by canoe, and his melodic writings on the bay changed the view of Alaska from cold starkness to mystical beauty. Muir came intrigued by glaciology, convinced a glacier had carved his beloved Yosemite, and determined that the glacier had significantly retreated from the size observed by Vancouver, some eighty years before. In 1916, a plant ecologist from Minnesota, William S Cooper, visited for the first of many times, to observe and learn about the plants in the area. He advocated for the preservation of the area, and in 1925, Glacier Bay was declared a national monument. It was redesignated as a national park in 1980.

There is no fee to enter, although getting there (aircraft etc) may require fees. 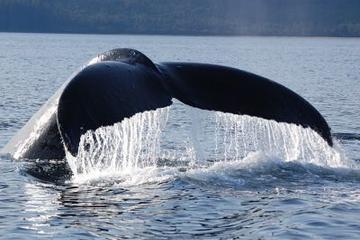 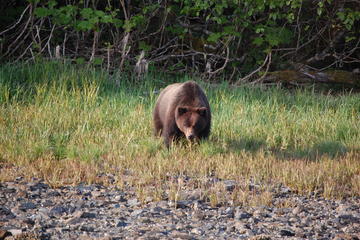 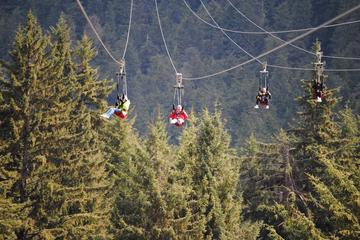 Whale Watching and ZipRiding, $245.95 via Viator

How to get to Glacier Bay National Park?

It is not possible to drive into the national park. The only road goes a distance of ten miles from the Gustavus Airport and Gustavus to the Glacier Bay Lodge and Visitor Center at Bartlett Cove. There are flights from Juneau to Gustavus on Alaska Airlines as well as seaplanes.

There is also a ferry from Juneau to Gustavus as part of the Alaska Marine Highway ferry system which takes approximately four hours. Visitors with cars on the ferry should be aware that there is limited parking for private vehicles in Bartlett Cove.

There are daily boat excursions and tours from the Glacier Bay Lodge.

Glacier Bay Lodge – It opened in 1966 as part of facility improvements for the 50th anniversary of the National Park Service. It is the only hotel accommodations in the park and has both standard and deluxe guest rooms. The Glacier Bay Day Tour departs from the dock daily on a high-speed catamaran for an eight hour guided boat tour of the park narrated by a park ranger. Advanced reservations for the boat tour are recommended.

Glacier Bay National Park Camping – There is a free, walk-in tent campground at Bartlett Cove accessible by foot. There are no RV facilities or vehicle camping areas. A free permit is available between the beginning of May and the end of September, required for both backcountry camping and the Bartlett Cove Campground. A 30 minute orientation at the information station is required of all campers. Certain areas of the park may be closed to camping due to animal activity or to protect resources.

Other Options – There are several inns and lodges as well as a bed and breakfast around Gustavus, Alaska.

Other Things to Do

Gustavus Whale Watching – In the summer, there are whale watching boat excursions in the morning and afternoon. The TAZ is a 50 foot vessel which departs from Gustavus City Dock and travels to Point Adolphus outside of the park. The boat looks for humpback whales in their summer feeding grounds as well as other types of whales in the area.