Home to the ancestral cliff dwellings of the Pueblo.

McPhee Reservoir, the second largest lake in Colorado, is located a half hour north of the park in
McPhee Recreation Area. The lake holds both cold and warm water fish, with the major draw rainbow
trout and kokanee salmon. Smallmouth bass, crappie and other species can also be caught in the
lake. If you prefer fly fishing, try the Animas River one hour east near Durango. It is known for
its big brown trout. 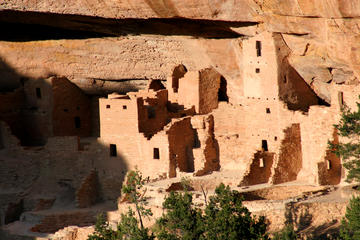 What is the best time to visit Mesa Verde National Park?

The majority of visitors choose to see the park during June, July or August. May and September are also popular months, as the average high temperature for those months are about 70 degrees.

How many days do you need in Mesa Verde National Park?

Most people spend a full day in the park. Two or three days will provide more time to explore. The minimum amount of time to spend in the park is a half day, since it will take you two hours (round trip) to reach Cliff Palace or Wetherill Mesa from the park entrance, and you will probably want to do at least one ranger guided tour.

Can you tour Mesa Verde on your own?

You can tour the park yourself but some of the cliff dwellings (Cliff Palace, Balcony House, Long House) are only accessible to visitors via a ranger guided tour. Step House is available for self guided visits between mid-May and mid-October. Spruce Tree House remains closed due to safety concerns but can be viewed from overlooks near the museum.

Is Mesa Verde open in October?

The national park is open daily year round. Tours of the Cliff Palace and Long House (Wetherill Mesa) are available until mid-October. The road to Wetherill Mesa does not close until the end of October, unless weather conditions require it to be closed earlier.

What is the closest town to Mesa Verde National Park?

How far is Mesa Verde from Denver, Pagosa Springs and Durango?