The most glaciers of any U.S. park outside Alaska.

North Cascades protects portions of the northern section of the Cascade Mountain Range. It is one of the snowiest places on earth and there are few maintained buildings. The park, located 90 minutes east of Bellingham, is popular with backpackers and mountain climbers.

North Cascades consists of a North Unit and a South Unit. The park is divided by Ross Lake National Recreation Area. Ross Lake is the most accessible part of the area as Highway 20 (the “North Cascades Highway”) travels through it. The recreation area contains three reservoirs and offers hiking and camping to visitors. In 2010, the Seattle Times called the three lakes the “most jaw-dropping and accessible water-and-mountain panoramic vistas you’ll find anywhere”

The North Cascades National Park Service Complex includes the contiguous units of North Cascades, Ross Lake and Lake Chelan National Recreation Area. Ross Lake is by far the most popular segment of the group, with North Cascades among the least visited national park designated units in the lower 48 states. Part of the reason is due to the ease of accessibility of Ross Lake compared to the North Cascades.

There are more than 300 glaciers in the complex. This is a third of all of the glaciers in the lower 48 states and the most glaciers of any park in the United States outside of Alaska. Boston Glacier is the largest glacier in the park, located on the north side of Boston Peak.

A 23 mile long reservoir in the National Recreation Area running from Highway 20 to southwestern British Columbia. This is the view from the Ross Lake Overlook

Diablo Lake is located in Ross Lake National Recreation Area in the North Cascades at an elevation of 2301 feet above sea level between Ross Lake to the east and Gorge Lake to the west. The Diablo Dam at the south end of the lake is one of three dams along the Upper Skagit River in Whatcom County. 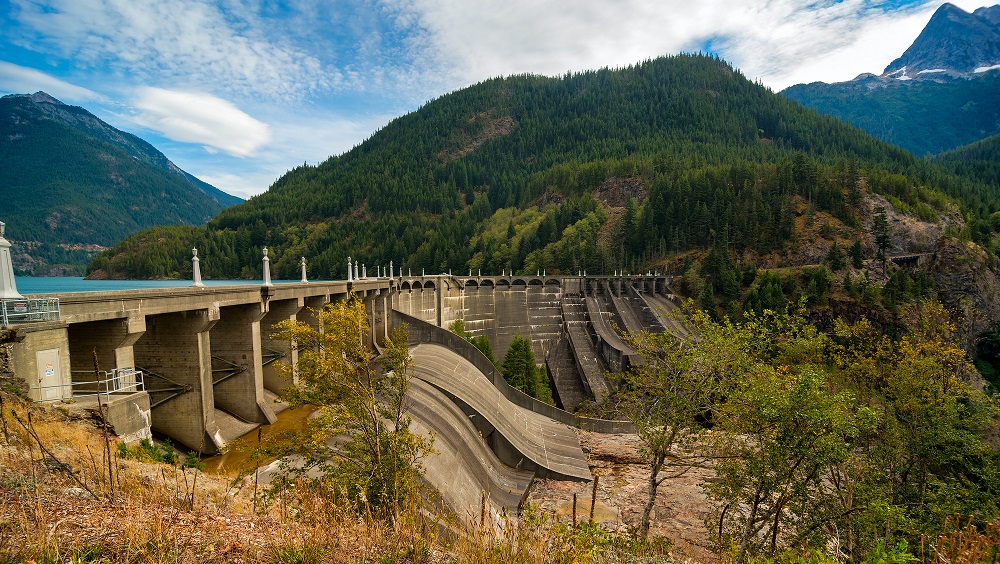 The Diablo Lake Overlook along Highway 20 is a must stop roadside attraction with restrooms and picnic tables. It provides a view of Davis, Pyramid and Colonial Peaks as well as Jack Mountain around the lake. 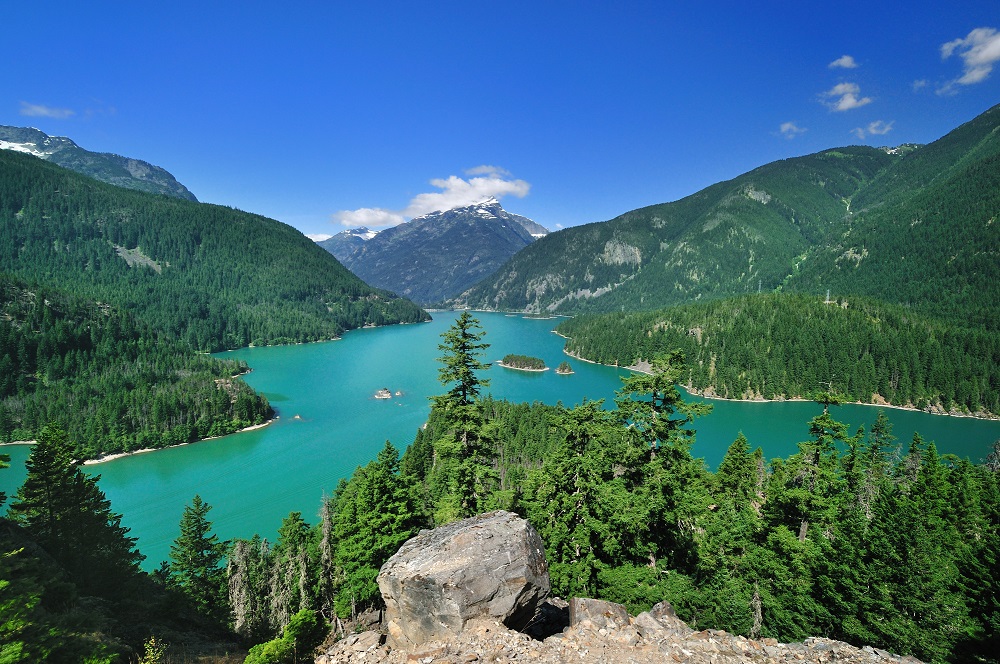 The Skagit River runs through the park after beginning in southwestern British Columbia and drains into the Puget Sound. This is a picture of it at the Newhalem Powerhouse below the Gorge Dam. 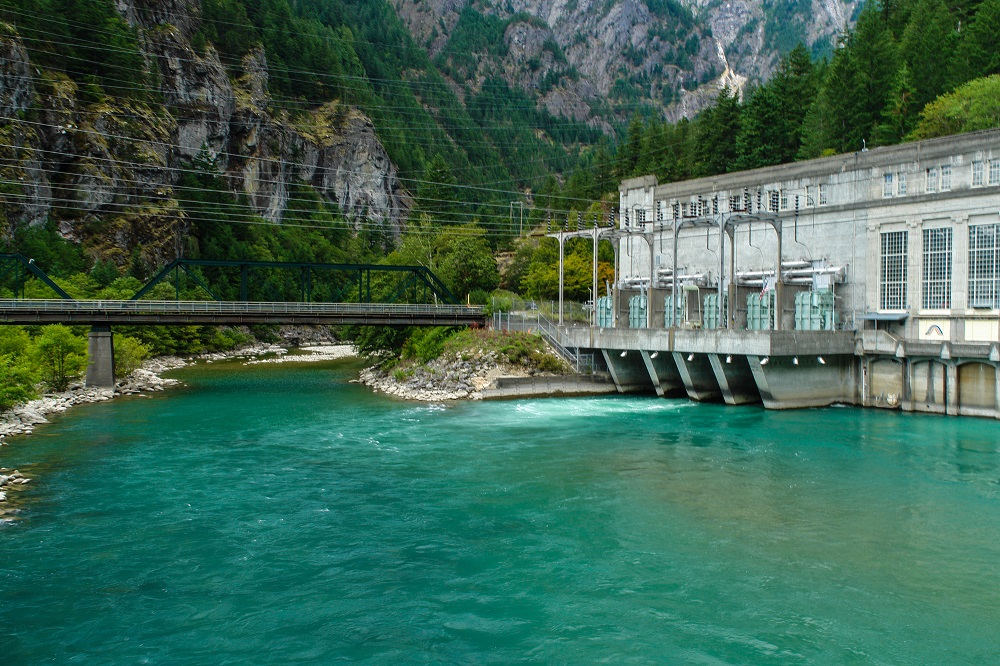 Rainy Pass has a one mile long wheelchair accessible trail from the Rainy Pass Trailhead at mile 158 on the North Cascade Highway to Rainy Lake, which provides a beautiful viewpoint of the North Cascades beyond a subalpine lake. The trail continues from here into the park (precise distance and elevation change unknown currently). 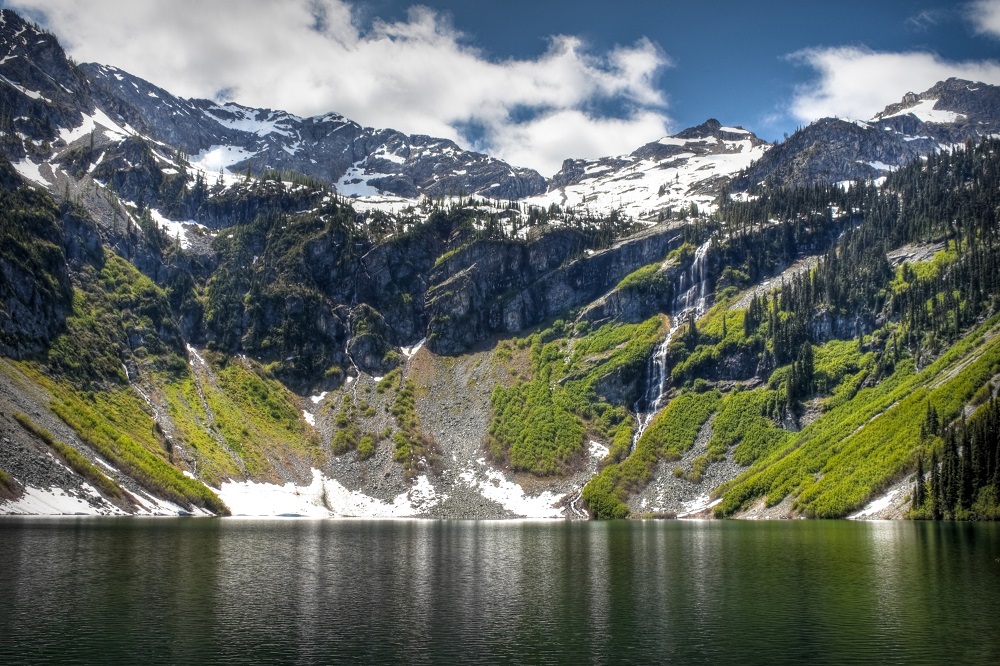 The park service website lists two lodges for access – the Ross Lake Resort and the North Cascades Lodge at Stehekin. The North Cascades Lodge is not accessible by road and is reached either by ferry or a 23 mile hike from Ross Lake NRA to the shuttle. The Silver Bay Inn & Resort and the Stehekin Valley Ranch are also located in (or near) Stehekin.

There are a handful of local lodges, inns and cabins available along SR 20 outside of the park boundaries. National chain hotels are available for those entering or exiting the park in the Burlington area, which is about 50 miles to the west, or the Okanogan area, which is 90 miles west. If you are traveling to or from the South Unit via Lake Chelan, there are local lodging options in Chelan and major hotel chain options in the Wenatchee area.

There are campgrounds located in the Ross Lake NRA for car camping. There are also almost 140 backcountry campsites including boat-in camping on Ross Lake and primitive camping in the Stehekin area. Camping is allowed in designated sites only. Below is a photo of a campsite at the Newhalem Campground: 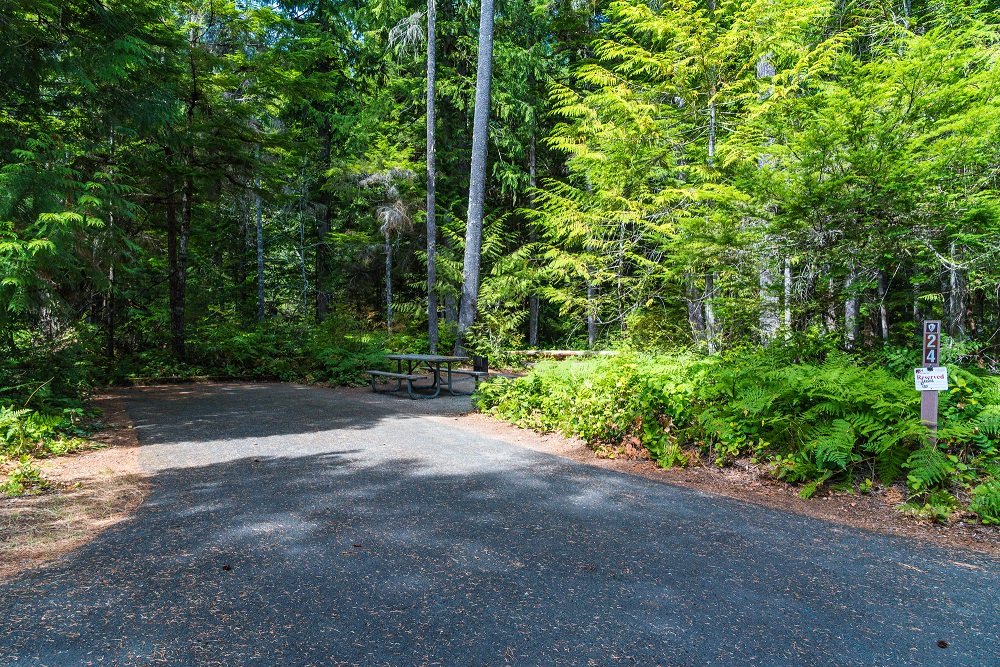 What is North Cascades National Park known for?

What can you do at the North Cascades?

The National Park Complex via Ross Lake NRA offers mountain views, hiking, fishing, boating/rafting and camping. The North Unit and South Unit are more remote and offer the possibility of hiking and backcountry camping in the remote wilderness.

What city is North Cascades National Park in?

North Cascades is located about 100 miles northwest of Seattle, 50 miles west of the city of Burlington. Newhalem and Diablo are two of the communities located in Ross Lake National Recreation Area, which is located between the North Unit and the South Unit of the park. Newhalem contains the park visitor center. There is another visitor center in Stehekin for those entering the South Unit by the ferry.

How do you get to North Cascades National Park?

Most people enjoy the National Park Complex from Ross Lake NRA, which is easily accessible in the summer by Washington State Route 20, known as the North Cascades Highway. The road is usually closed east of the park during the winter. Ross Lake is the most accessible part of the North Cascades National Park Complex, which includes Ross Lake, the North Unit and the South Unit. The North Unit of the park can be reached by trails departing from Diablo. Another option is to depart from Ross Lake Resort. If you want to drive into the actual park, try the South Unit by driving from Marblemount to the Cascade Pass Trailhead on Cascade River Road. Another option is to take the ferry up Lake Chelan to Stehekin. From there, you can take a shuttle north and hike into the park. The Golden West Visitor Center is located in Stehekin, a short walk from the passenger ferry landing.