Channel Islands National Park protects five islands off the Southern California coast at Ventura and Santa Barbara. Visitors enjoy whale watching in the surrounding ocean or exploring the undeveloped islands. The Channel Islands is one of Earth’s richest marine biosphere reserves and has been called the Galapagos Islands of North America. It has more than 100 species of flora and fauna, as well as diverse wildlife.

The human history of the Channel Islands spans more than 12,000 years, beginning with the Chumash, who lived there for thousands of years. The first Europeans first arrived in the 16th century, and discovered a rich culture which depended on the land and sea for all that was needed. The islands came under Mexican rule in 1821, and sheep and cattle ranches occupied several islands, and the waters were harvested for fish. The islands became part of California when it gained statehood in 1850. The US Army, Navy, Air Force and Coast Guard all established posts on the Channel Islands during the 20ths century. Light towers were constructed in the 1910s, and the islands were managed by the military until they were transferred to the National Park Service.

The first two islands established as National Monuments in 1938 were Anacapa and Santa Barbara. Legislation in 1980 established the National Park and added the three remaining Northern Channel island. The remains of the ancient Chumash villages are mixed with historic ranches and military structures. Each of the five islands has a unique history.

There is no entry fee to enter the Channel Islands, however transportation options, such as boats or tours, may require fees. 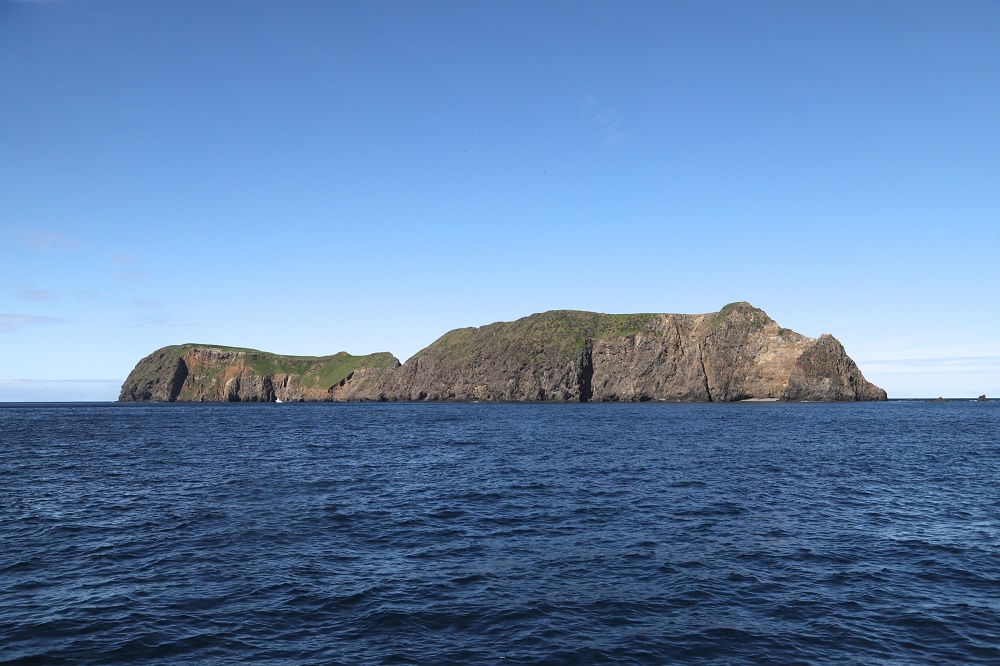 Anacapa Island is located about 11 miles off the coast of California and 5 miles east of Santa Cruz Island. It is a small volcanic island grouping six miles long with a series of narrow islets. Island Packers offers trips year round to East Anacapa Island with a limited number of trips to Frenchys cove on West Anacapa Island. The travel time from Ventura and Oxnard Harbors is one hour. Visitors must climb 157 stairs from the dock. The park service recommends that you consider a different island from April through mid-August if you would find the conditions created by the island’s seabird rookery of western gulls adverse. 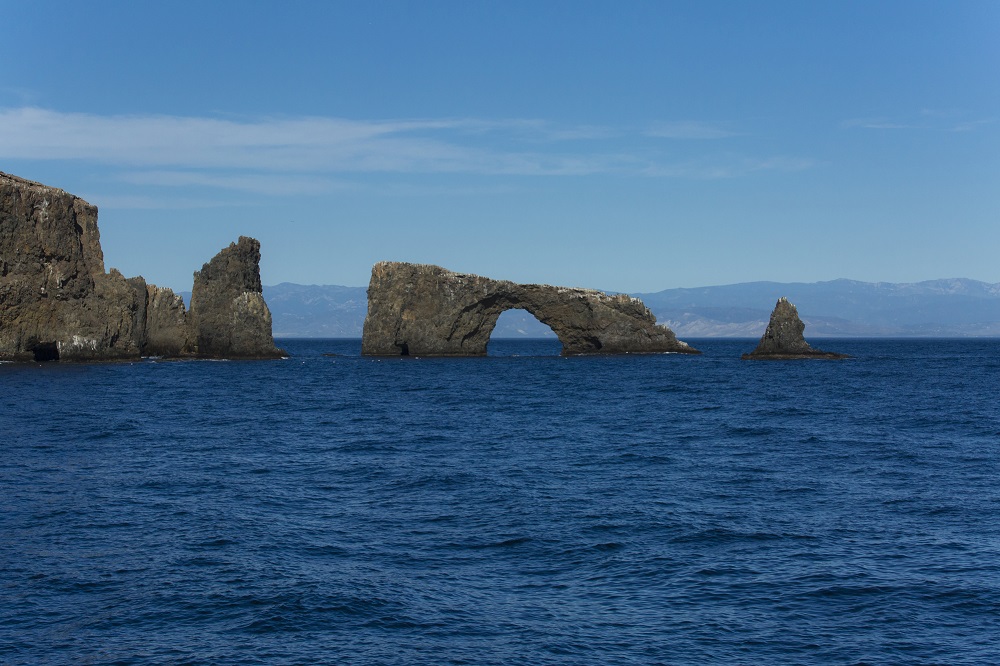 Arch Rock is a 40 foot high natural bridge on East Anacapa Island. Waves eroded the sea cliffs to form this sea arch, an iconic image of the park. 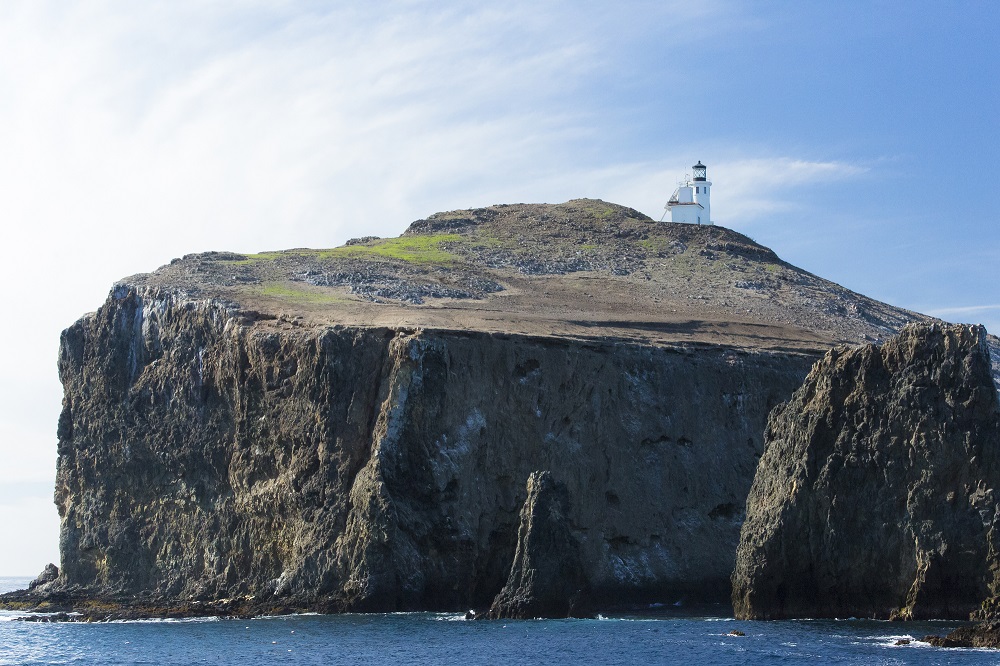 The Anacapa Island Light Station was the last major lighthouse built on the West Coast. The first version was constructed in 1911/12 at the entrance to Santa Barbara Channel. An improved lighthouse was first lit in March 1932. The Santa Barbara Channel is an important shipping lane used to move goods south to the ports of Los Angeles and Long Beach. Visitors are not permitted to tour the lighthouse for safety reasons. 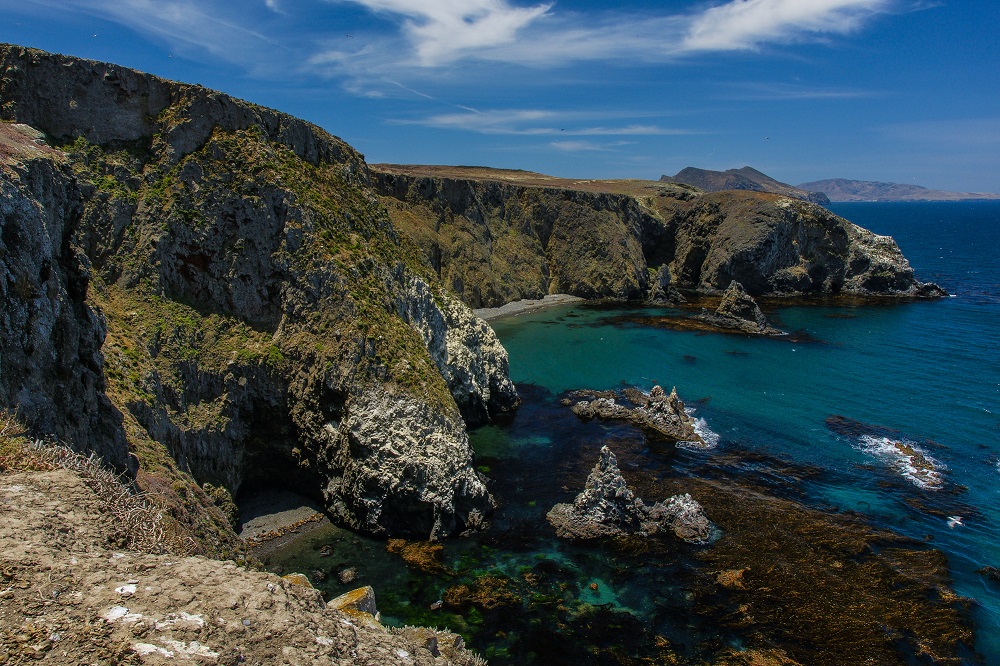 Cathedral Cove is on the north end of Anacapa Island and a popular spot for viewing marine wildlife. There is a lookout accessible by the hiking trail. The cove also has a number of sea coves and is a popular dive site. 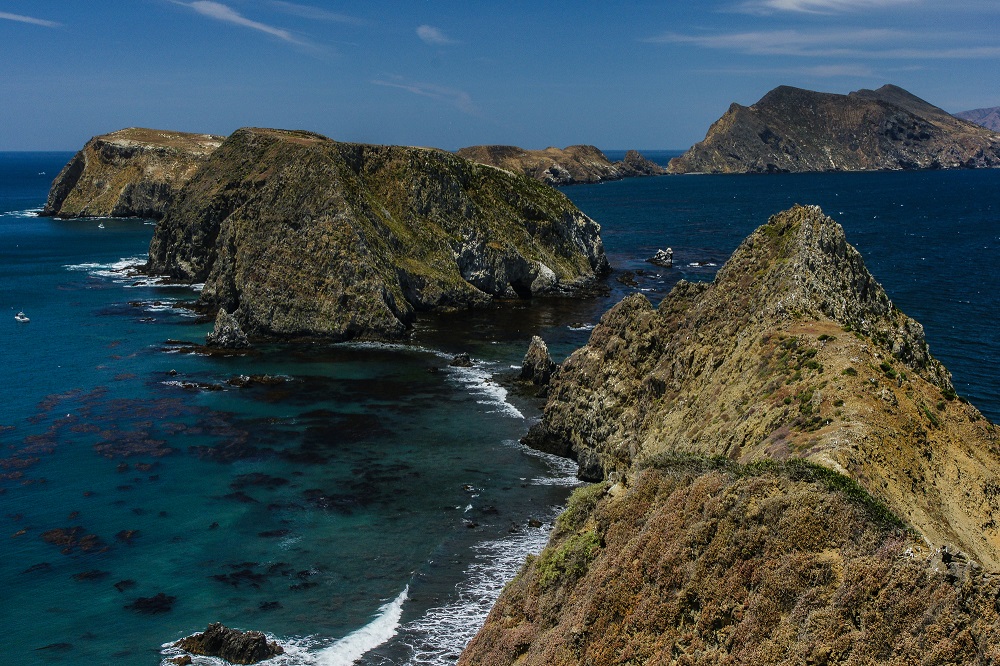 Inspiration Point is an easy .5 mile walk to the scenic overlook on the western side of East Anacapa Island allows visitors to see the two other islets and Santa Cruz Island. 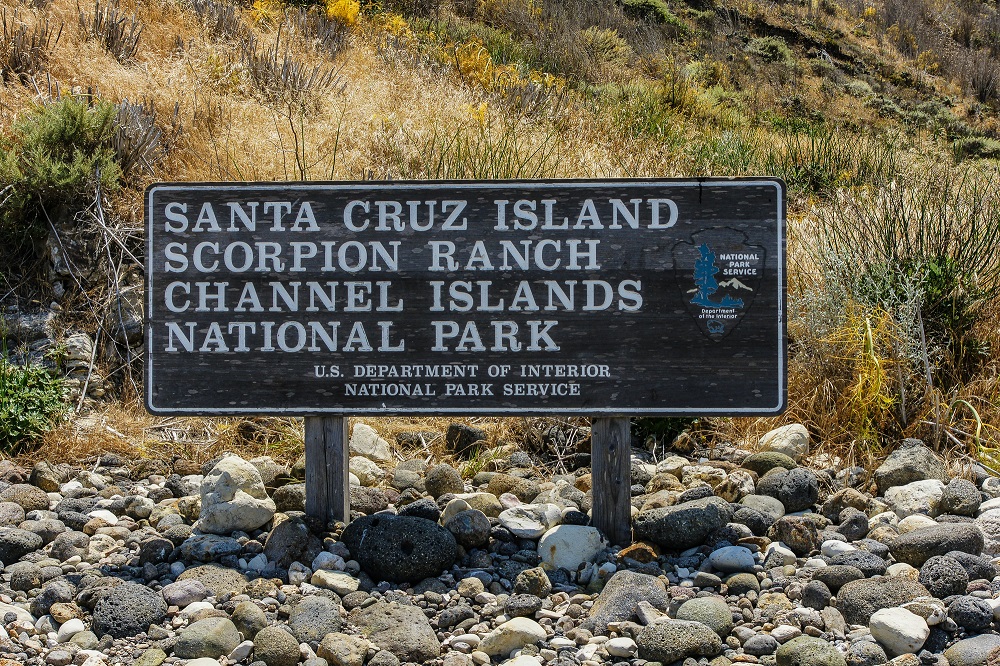 Santa Cruz Island is the largest of the Channel Islands with an area of 96 square miles. It is one of the most easily visited islands, with year round boat trips offered by the park concessionaire with a travel time of one hour. Trips land at the pier at either Scorpion Anchorage or Prisoners Harbor, unless the piers are closed and landing is then via skiff on the beach. This island has the best weather and offers the most recreational activities according to the park website. 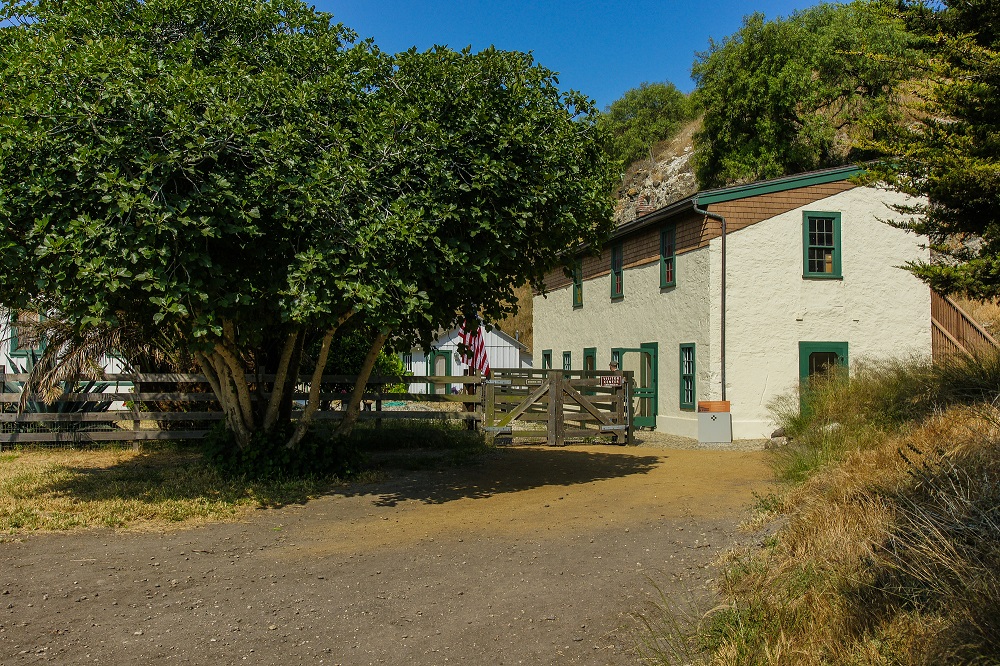 The visitor center on Santa Cruz Island is located in the Scorpion ranch house. The Scorpion Ranch on the east end of the island was used as part of sheep ranching operations until 1984 by the Gherini family, descendants of one of the founders of the Santa Cruz Island Company. 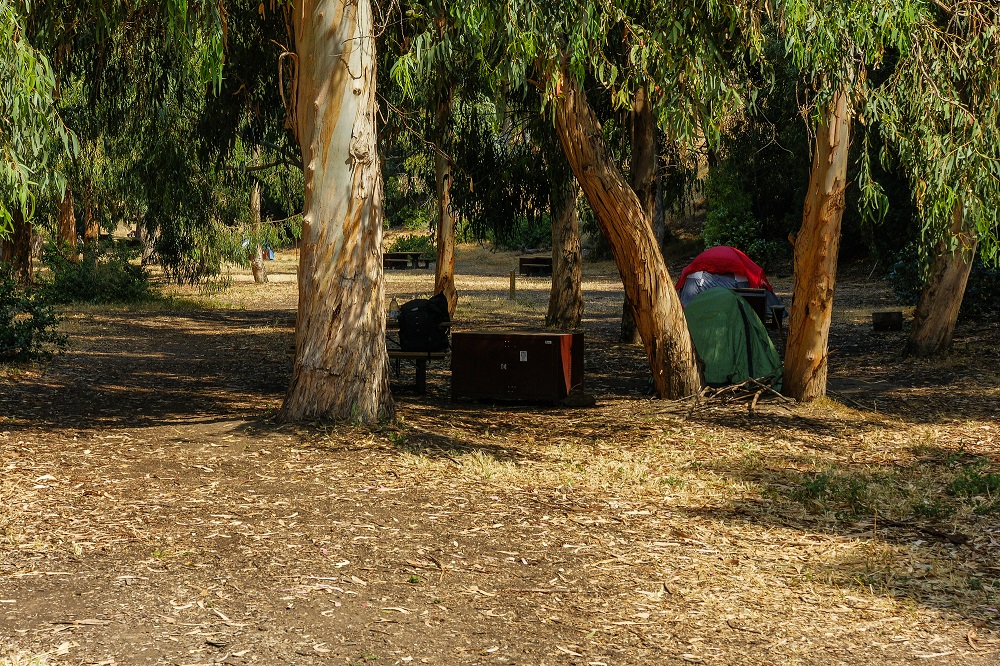 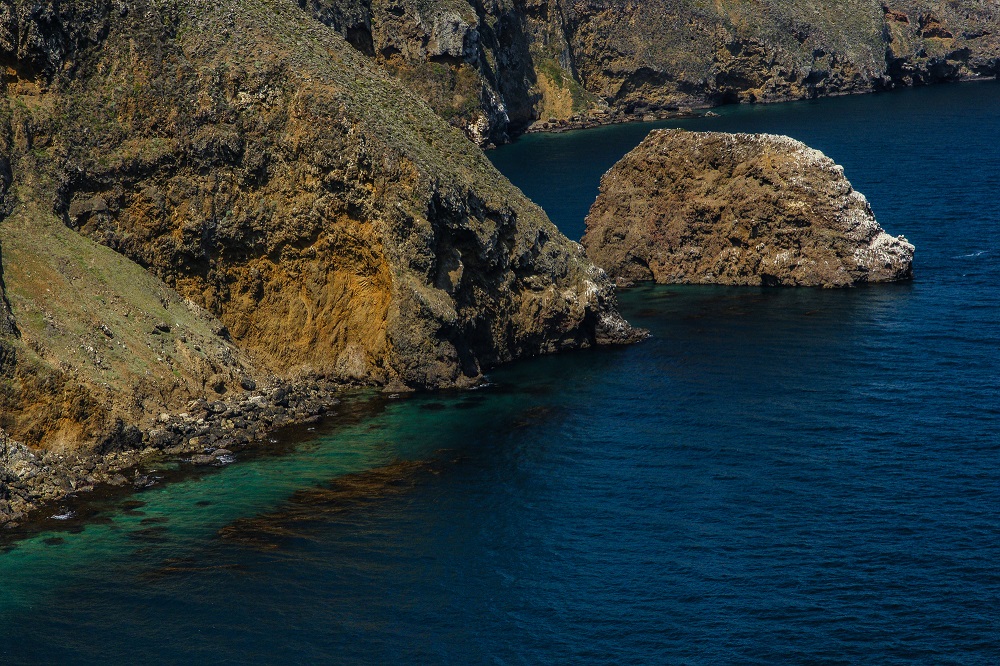 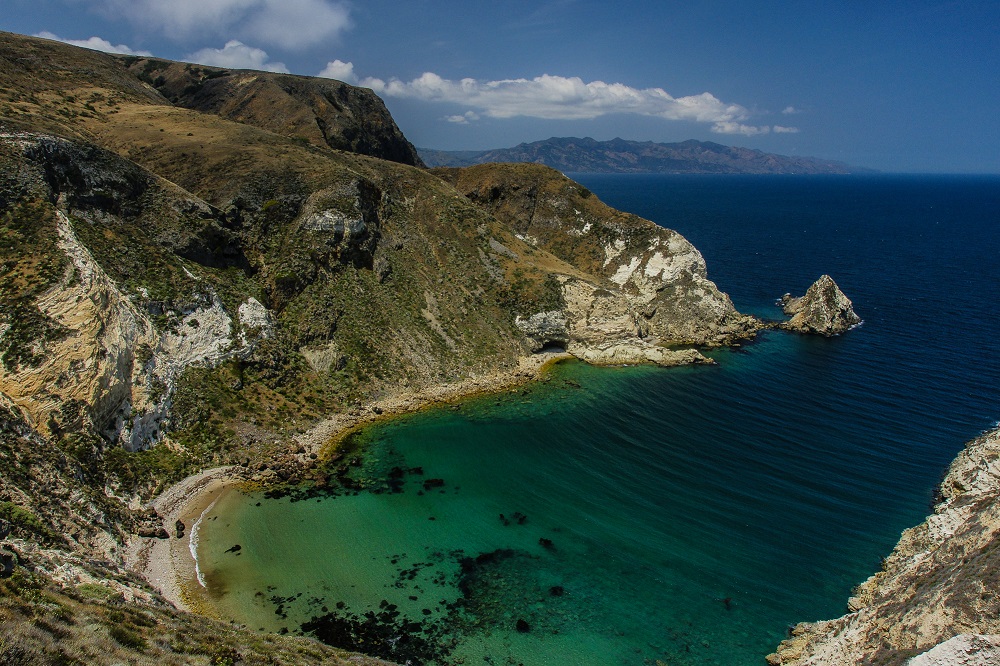 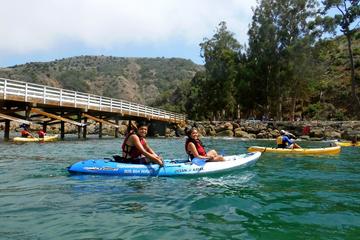 Kayak the Channel Islands via Viator, $189