Some of the steepest, oldest cliffs in North America.

About 75 miles from its intersection with the Colorado River, the Gunnison River has spent two million years cutting Black Canyon so narrow and deep that sun penetrates to the bottom only at midday. The national park protects 14 miles of the deep gorge, cut at the rate of one inch per century. The rocks exposed at the bottom are nearly two billion years old, dating from the oldest era on Earth.

Latest information on Black Canyon of the Gunnison

Located 15 miles northeast of Montrose, the South Rim offers a seven mile (one way) rim drive with twelve overlooks and about five miles of hiking trails. The South Rim Campground is the largest in the park with 88 sites and reservations offered in the summer. The East Portal Campground in Curecanti National Recreation Area is also on the South Rim just outside the park boundary. The closest hotels and restaurants to the South Rim are in Montrose, which is 15 miles away.

Winter at Black Canyon is generally from November until April.  Cross-country skiing and snowshoeing are popular then.  The North Rim closes to vehicle access in snow.  The South Rim remains open year-round to the second  overlook.

The Black Canyon of the Gunnison only shows signs of historic use on the rims of its canyon, not down in the valley. The Spanish were the first Europeans to explore western Colorado, beginning with Juan Rivera’s expedition in 1765, and the other by Father Dominguez and Father Escalante in 1776. Both parties passed the canyon on their way to the California coast. Fur trappers in the early 1800s probably passed the area of the canyon, but they were illiterate and did not record their journeys.

By the 1850s, exploration of the west was en vogue, and various expeditions encountered the canyon in their search for land for railroads and mining. The first written record of the canyon was written by Captain John Williams Gunnison in 1853, who was leading an expedition exploring routes between Saint Louis and San Francisco. He named the river the Grand, but it was renamed in his honor the following year when he was killed. A narrow, 3′ train track was built through the canyon, hoping to provide a link to the gold and silver mines in the mountains. It took over a year for laborers to carve out a 15 mile road track between Cimarron and Sapinero, on the south end of the park. Eventually, explorers saw the canyon for recreation; Rudyard Kipling wrote while on his 1889 train ride through the canyon: “We entered a gorge, remote from the sun…there was a glory and a wonder and a mystery about the mad ride, which I felt keenly.” An alternate train route through Glenwood Springs was established, and it being an easier route than the one through Black Canyon, the Black Canyon route was abandoned in 1955.

The Black Canyon of the Gunnison was established as a National Monument in 1933, and became a National Park in 1999, and today it remains a rugged wilderness. Upstream of the canyon is the Curecanti National Recreation Area, and downstream is the Gunnison Gorge National Conservation Area. The canyon is so named not because of the color of the stone, but because the gorge receives only 33 minutes of sunlight each day.

An entrance fee of $15 for motorcycles and $15 for private, noncommercial vehicles is charged at entry. The passes are good for seven days. The park offers an annual pass for $30 that is good for 12 months from the purchase date. The national park pass ($80), senior pass ($10) and other national park passes are accepted at Black Canyon of the Gunnison National Park.

Only 168 miles of the 9,000 miles of trout streams are designated Gold Medal Water & Wild Trout Water by the Colorado state wildlife commission. These waters provide excellent angling for large trout. Inside the park, fishing is with artificial lures/flies only and all rainbow trout are catch and release. Fishing with barbless hooks or crimped barbs is recommended. Access to the Gunnison River is easiest via the East Portal Road. The Gunnison River is known for producing big rainbows and brown trout. A multi-day float trip is the perfect way to catch some big fish without a strenuous hike.

Grand Mesa National Forest lies 90 minutes north of the park and provides access to more than 200 lakes. As Grand Mesa is located on a 10,000 foot plateau, the lakes provide great cold water fishing for trout, including rainbows, brook trout and cutthroat. The waters are stocked by the Colorado Department of Wildlife.

The Gunnison River is only for expert kayakers. The waters are Class III-V rapids and some sections are not runnable. A free wilderness use permit is required to kayak the river.

Black Canyon is for expert rock climbers only. The canyon is deep with the highest section 2700 feet and the majority of the climbing activity taking place at a height of around 1800 feet. The climbs are multi-pitch traditional routes in remote areas. A free wilderness use permit is required for climbing. The peak climbing season is from mid-April to early June and mid-September to early November.

Black Canyon of the Gunnison was designated an International Dark Sky Park in 2015. The national park takes efforts to limit light pollution in the park at night. This keeps the sky around Black Canyon largely unaltered by light at night. There is a large astronomy festival every June.

The rims contain both wildlife hikes and trails to scenic overlooks.  Trails leading from the South Rim to the inner canyon are strenuous and challenging.  A free wilderness use permit is required.  Access to the inner canyon is also possible via the East Portal Road and the Devil’s Backbone and North River Routes.

There are two campgrounds in the park – one on the North Rim and one on the South Rim.  There is also a nearby campground in Curecanti National Recreation Area.

There is no lodging in the park.  Hotels are available in Montrose, Delta and Gunnison.

What do you do at the Black Canyon of the Gunnison?

Most people visit Black Canyon of the Gunnison to check off from their bucket list the view from the canyon rim. The South Rim Drive is seven miles long and has 12 overlooks. There are a few day hikes in the area but it is not a large park like Yosemite or Yellowstone. It is however popular with adventure sports enthusiasts though as the inner canyon offers adventurers challenging hiking, rock climbing and kayaking. There are no marked trails into the inner canyon but there are several wilderness routes to the river that should only be attempted by individuals in excellent health who are prepared to self-rescue. The park contains Class V rapids for expert kayakers with some sections unrunnable. The Gunnison River is a Gold Medal trout stream, with access via the East Portal Road or the wilderness routes into the canyon. Black Canyon is also an International Dark Sky Park, making it a good place for stargazing.

Is Black Canyon of the Gunnison worth seeing?

Black Canyon of the Gunnison receives approximately 300,000 visitors a year, a far cry from some of the top national parks like the Great Smoky Mountains, Grand Canyon, Yellowstone and Yosemite. However, that does not mean it should not be part of your vacation travel plans. It has been called an “uncrowded gem” by some. For others, Black Canyon is a convenient stop between Rocky Mountain National Park (RMNP) or Great Sand Dunes National Park and Mesa Verde National Park. It is probably not a destination park for those living on the East Coast or in California, but it has a unique quality and beauty which would be hard to justify missing when you are near the area.

How long is the Black Canyon of the Gunnison?

How long does it take to see Black Canyon of the Gunnison?

If you want to see both the North Rim and the South Rim, it will take a few extra hours because there is no bridge across the canyon. The drive from the South Rim to the North Rim is about two hours, requiring a trip through Curecanti National Recreation Area.

How deep is Black Canyon of the Gunnison?

The canyon averages a depth of approximately 2000 feet and is 2,722 feet deep at Warner Point. It also contains the 2,250 feet high Painted Wall, the highest vertical cliff in the state of Colorado. However, Black Canyon is no where near as deep as the Grand Canyon, King’s Canyon or other deep North American canyons. It is instead famous for its narrowness and the substantial drop of Gunnison River.

How old is the Black Canyon?

The gorge is carved through Precambrian rock by the Gunnison River which formed 1.7 billion years ago. Runoff from the La Sal Mountains, West Elk Mountains, and Sawatch Range as part of the Gunnison river began carving its way through soft volcanic deposits in the area 15 million years ago. The water then cut its way through the hard metamorphic rocks around the Black Canyon at the fast rate of one inch every 100 years. It was established as a national monument in 1933 and redesignated a national park in 1999.

How did the Black Canyon get its name?

You are probably wondering why is Black Canyon black. The rock walls take on the appearance that they are black because they are often in the shadows, since sunlight cannot penetrate the depth fo the steep and narrow canyon.

How far is Black Canyon from Denver?

How far is Black Canyon from other Colorado National Parks?

Is Black Canyon of the Gunnison Open? 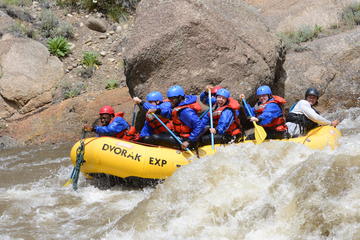