The only national park in the US south of the Equator.

The National park of American Samoa is the only U.S. national park south of the equator.  The park is located on three volcanic islands in the Pacific Ocean and contains both Indo-Pacific coral reefs as well as the only mixed-species paleotropical rainforest in the United States.

The native language is Samoan, which is related to Hawaiian and the other Polynesian languages. Most people can understand basic english and english is widely spoken.

American Samoa is the only United States territory south of the equator. The eastern and western islands of Samoa were divided in the 1899 Treaty of Berlin between Germany and the United States. The island chain is a total of almost 77 square miles, located 2300 miles southwest of Hawaii and about 4100 miles from San Francisco. The American Samoa contains five main islands and two coral atolls. It has a population of approximately 55,000 people.

The United States signed a treaty for a naval station in Pago Pago Harbor in 1878. Pago Pago Harbor is one of the deepest and most sheltered harbors in the Pacific. The Naval Station was only subject to one attack by a Japanese submarine on January 11, 1942, about a month after the attack on Pearl Harbor. The naval base officially closed in 1951.

Congress authorized the lease for the land for the National Park of American Samoa in 1988. The purpose was to protect one of the last remaining undisturbed paleotropical forests, and the largest such forest under the direct control of the US. Th other cited reasons were the area’s coral reefs and the population of the Pacific flying foxes. The Samoan chiefs on the island agreed to sign a 50 year lease in 1993. The park was dedicated as the 50th National Park by the Secretary of the Interior Bruce Babbitt in 1997. The park had approximately 28,000 people visit in 2018.

The park headquarters and visitor center are located in Pago Pago across from the Pago Way Service Station. The visitor center is open on weekdays (except for federal holidays). One of the two McDonald’s on the island is located down the street. There is no fee to enter this national park.

This is the most popular and easily accessed section of the park, relatively speaking. The national park is located north of Pago Pago, the territorial capital of American Samoa. Mount Alava in the park is the fourth highest on Tutuila Island at an elevation of 1610 feet. Pola Island in the park is known for its 300 foot sheer cliffs and as a nesting place for sea birds.

Below is a view of Pago Pago, the gateway to the park. 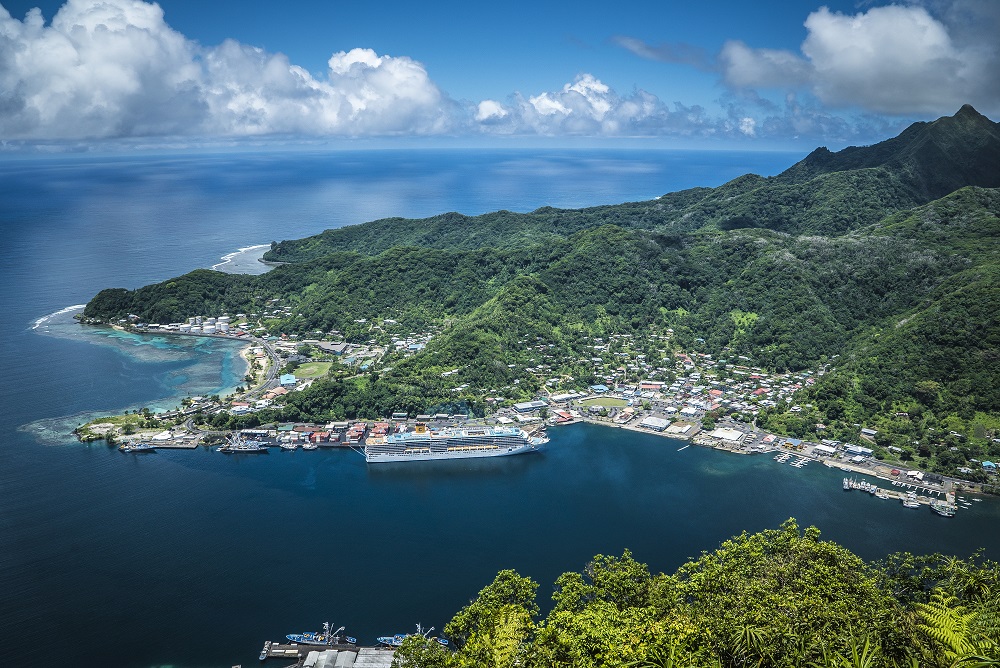 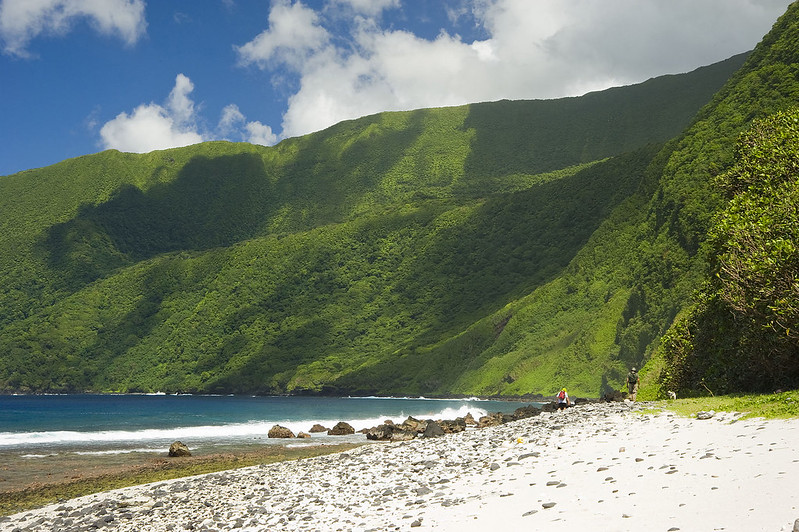 Photo Credit: US Department of the Interior

These islands are sixty miles east of Tutuila and this section of the park is known for its scenic beach and snorkeling amidst the coral reefs. It is remote and quiet, accessible by airplane but with limited amenities for tourists. It is favored by escapists seeking seclusion – this is an area known for its unspoiled beauty and is definitely not the typical beach town. Be sure to bring your own snorkeling gear. Ofu Beach is located in the National Park of American Samoa. Travel Channel has called it “one of the best beaches in the world”.

Tau is the largest island in the Manu’a Group and the easternmost volcanic island of the Samoan Islands. Lata Mountain on the island is the highest point of American Samoa. The island is reached by flight from Tutuila to Fiti’uta village. A trail runs from Saua around Si’u Point to the southern coastline and Lata Mountain. The Tau Unit of the national park contains some of the tallest sea cliffs in the world.

American Samoa is rainy, warm and humid year round.  The cooler and drier season is from June to September.

Camping is not permitted in the park. Lodging is available on the islands.

In 2012, there was a Homestay Program described on the website of the National Park of American Samoa. The Homestay Program allowed visitors to the islands to stay with host families and experience Samoan culture. The program is not run by the park system, but contacting the visitor center can give you additional information about the program.

American Samoa is located in the South Pacific Ocean between Hawaii and New Zealand. It is about a 90 minute flight to Fiji from the island, which lies almost 800 miles northeast of it. Samoa is about 60 miles east of the group of islands known as American Samoa.

The American Samoa is an unincorporated and unorganized terroritory of the United States. U.S. Citizens and Nationals need a valid passport but do not require a visa to enter the territory.

It is a solid day of travel to get to the park from most of the continental United States. Hawaiian Airlines is the only major carrier to fly to American Samoa. Flights are available twice a week from Honolulu to Pago Pago International Airport on Tutuila Island. American Samoa is almost a 6 hour flight from Honolulu. Honolulu is a 5 hour flight from Los Angeles, putting the minimum travel time from the continental United States at around 11+ hours (depending on layover). Small planes serve Ta’u Island and a local boat is available from Ta’u to Ofu Island. In total from the East Coast, you are looking at around 22 hours of total travel time (including layovers). A recent search for flights found prices were between $1700 and $3000 per person when bought in advance.

Fogama’a Crater National Natural Landmark – Dedicated in 1972, it contains 485 acres including the prominent crater as well as Steps Point, the farthest southern point of US territory (excluding Rose Atoll). The crater is inland from Larsen’s Bay, where there are extensive seabird breeding grounds.