Dry Tortugas National Park is known for its unfinished coastal fort which protected the shipping lanes to the Gulf of Mexico, tropical bird breeding areas, amazing coral reefs and plentiful sea life. The park is only accessible by boat or seaplane. The archipelago of coral islands is located about 70 miles west of Key West. The park is bordered by the Florida Keys National Marine Sanctuary and the Tortugas Ecological Reserve.

Most visitors travel by ferry and spend four hours on the island, taking the guided tour of Fort Jefferson and a swim at the reef with snorkel equipment. President Franklin Delano Roosevelt designated the area a National Monument in 1935 before the National Park was established in 1992. There is still no fresh water or seasonal streams on the island.

There’s lots of information about the Dry Tortugas National Park here at Parkcation.  Scroll down for more information or choose from these additional pages:

The Dry Tortugas was discovered by Ponce de Leon in 1513 during his pursuit of the rumored fountain of youth on an island known as Bimini. It was named for the many sea turtles there during this time, with Ponce de Leon catching over 100 while on the island. Tortugas is the Spanish word for “turtles.” Seafarers later added the descripter “Dry” to indicate that the island lacked fresh water.

Prior to 1825 when a 65 foot lighthouse was built on Garden Key (originally called Bush Key), shipwrecks were common due to treacherous reefs nearby. The area contains one of the highest concentrations of shipwrecks in North America.

In 1846, construction of Fort Jefferson began on the island. The harbor provided protection to a key strategic deepwater anchorage in North America. It was also positioned along one of the busiest shipping lanes in the world as boats enter and leave the Gulf of Mexico. Thousands visit the fort every year even though it was never finished despite nearly thirty years of construction.

A number of famous people have shaped the history of Dry Tortugas.

Dr. Samuel Alexander Mudd, the doctor who treated John Wilkes Booth’s broken leg following his assassination of President Abraham Lincoln, was the most famous prisoner of Fort Jefferson. Dr. Mudd was convicted and sentenced to life imprisonment there. Dr. Mudd received a pardon by Andrew Johnson on February 8, 1869, after assisting with the yellow fever epidemic on the island. Dr. Mudd’s cell is on the bottom level past the Park Headquarters.

Ernest Hemingway was marooned at Fort Jefferson for seventeen days after a fishing trip gone awry. During his time in the Key West from 1928 to 1940, he did some of his best writing.

Entry to the park is $10 per person, but is free for children 15 and younger. It is often included in seaplane and ferry tickets. America the Beautiful passes are accepted to cover this fee, although they are not available for purchase at the park. These entering by private transportation should stop and pay at Garden Key.

Most people that visit the park take the ferry.  The Key West Ferry Yankee Freedom III is a high speed catamaran transporting passengers daily on the round trip to Fort Jefferson in Dry Tortugas National Park from Key West. If you are planning to visit through this (most affordable) option, then be sure to book early as it does sell out.  When we were planning to go, several days were sold out several weeks in advance.

There is a $10 per person entrance fee included in the price of the ferry ticket.  Show your America the Beautiful annual/lifetime pass and the cost of admission will be deducted from the transportation costs at check-in.  The ferry fee does not include the camping fee, which is collected at the campground.  Parking is available in a garage across the street from the dock in Key West for a cost (when we visited in June 2017) of $14 for the day.

The campground will not turn away campers if the 10 tent sites are full, but the ferry does restrict how many come over in a day.  If you are planning to camp, make your reservations even earlier, especially in the winter months when the number of travelers from northern climates is high.

Key West Seaplane Adventures is a private company offering seaplane tours from Key West International Airport to Dry Tortugas National Park, with a window seat and head set for every passenger and a narrated tour of the various ocean and wildlife features along the way, including shipwrecks. It is faster than the five hour long ferry, giving guests a little more time in a less crowded park before the ferry arrives or after it leaves. Rates for children under 12 are a little cheaper than adult tickets, and children under 2 are free. Half day and full day tours are available, but the seaplane concessionaire does not transport camping gear for extended stays.

A number of different chartered tours are available for various activities, including fishing, diving/snorkeling, sailing, and wildlife viewing. Charters are run by third-party companies, but the National Park Service does maintain a list of those authorized to operate within the park, available here.

All private boats, including kayaks and dinghies, entering the park are required to stop at Garden Key headquarters at Fort Jefferson to obtain a boat permit. Private seaplanes require a special use permit, which can also be obtained at Garden Key.

The Google Map suggests that Bush Key and Garden Key are separate islands separated by a small amount of water. When we were there in June, this was not true. You could have walked between them but you are not permitted to at that time because of the nesting birds. There are rather large signs forbidding you to go beyond a certain point.

What to Bring with You

We packed pretty sparsely compared to other people that we saw on the Yankee Freedom III, but it worked for us. We wore our swimsuits and brought our camera, hats, sunglasses, sunscreen, a change of clothes (for return trip + dinner in Key West near the docks), towels and a small cooler with water bottles and some snacks. We bought dramamine and an underwater disposal camera on the boat (read our post on waterproof cameras here, as it definitely pays to plan ahead on that front, but indecision lead to a last minute purchase). The ferry provided breakfast, lunch and snorkeling equipment.

This is the central feature on Garden Key and most people coming to the island tour it in one form or another.  Whether you had out for a self-guided tour or take the walk led for Yankee Freedom III guests, you will get a birds-eye view of the Gulf of Mexico from the top of the fortress walls as well as a deep sense of appreciation for the beauty of this park.  If you are a history buff, you can easily spend 1-2 hours walking around the fort and taking it and the scenery in.

John James Audubon visited the Florida Keys in May 1832 in order to observe and paint some of the island’s 200 bird species. Since, the Dry Tortugas has become a major bird watching site and a staple of the Great Florida Birding Trail. It is the only nesting colonies in the contiguous United States of the magnificent frigatebird, sooty tern, brown noddy and masked booby. Every spring, dozens of migratory birds land on the Fort Jefferson parade grounds as they pass through.  You can see our bird photos here from our late June trip.

Snorkeling is one of the most popular activities at Dry Tortugas National Park. The gear is included with your purchase of the Yankee Freedom III ticket. You pick it up at the dock on Garden Key after signing a waiver. You can read more about our snorkeling experience and see our pictures here.

There is a small visitor center and gift shop if you pass through the Fort Jefferson entrance and look to the right.  The passport stamps, informational video/displays and some souvenirs are inside.  They have limited hours so if you have your heart set on a passport stamp, be sure to check when they are open.  If you somehow miss it, you can also get the stamp at the Shark Valley Visitor Center in Everglades National Park.

The only options to stay in the park overnight are by private boat (we saw a sailboat anchored there while in the park) and the small campground area. There are no hotels or other lodging options on the islands. Most people that are going to make a day trip find a hotel in Key West. 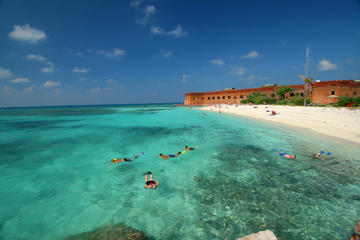 There are a few different airport options if you are looking to tour Florida. We, for example, flew into Orlando and then made the drive down (seven hours). The next closest airport to Key West is Miami. You can rent a car there to drive through the Florida Keys to Key West. It is about a three hour drive and one of the most scenic in the country.