Crater Lake: The Deepest in the Country.

Crater Lake National Park protects the deepest lake in the United States and the ninth deepest in the world. It contains some of the clearest fresh water in the world. Crater Lake was formed in the collapse of the volcano Mount Mazama during an eruption 7,700 years ago.  It averages 1,148 feet deep and tops out at 1,949 feet deep.

The human history of the area extends back even further than the eruption of Mount Mazama. While artifacts were found underneath the ash from the explosion, there is little evidence that the area was a permanent home. The Klamath Indians, descended from the Makalak people who lived near the area at the time, tell stories of the eruption, but because the stories have been passed down orally throughout the generations, there are different versions. The area is viewed as a sacred place to the native people of the area, and some choose not to view it, but to allow it’s beauty and mystery to form a religious context. in 1853, locals from about 90 miles southwest set out looking for the legendary “Lost Cabin” gold mine that visiting miners were bragging they had found. Several of the locals found the large lake in a depression, with the bluest water they had ever seen. They named it “Deep Blue Lake,” but with no gold, the discovery was soon forgotten. In 1862, another party of prospectors arrived, naming it “Blue Lake,” in an article for the Oregon Sentinel.

Several other visitors “discovered” and explored the lake, but it wasn’t until 1869 that newspaper editor Jim Sutton called it “Crater Lake” in his article about his adventure. A young boy in Kansas, William Steel, reading the article, would one day be instrumental in creating it into a national park. Steel helped map the lake in 1886, although his proposals to create a national park met resistance from local sheep herders and miners. The growing conservation movement resulted in the creation of the Cascade Range Forest Reserve in 1983. Steel continued to push, and in 1902, Crater Lake was established as a national park by President Theodore Roosevelt, making it the fifth oldest national park in the United States. Steel continued to advocate for the park, including the creation of the Crater Lake Lodge, which opened in 1915. The lodge lacked amenities and had substandard accommodations, but it was compensated for by the magnificent views of the lake and surrounding Cascade Range. With time, the lodge improved, although both the park and lodge were closed during World War II, and the neglect took its toll on the buildings. The National Park Service acquired ownership of the lodge in 1967, and when plans to demolish the dilapidated building fell through, a plan to save it was set forth, a process that was completed in the fall of 1994.

Winter fees are currently in effect at the park. An entrance fee of $10 for motorcycles and $10 for private, noncommercial vehicles is charged at entry. The passes are good for seven days. The park offers an annual pass for $30 that is good for 12 months from the purchase date. The national park pass ($80), senior pass ($10) and other national park passes are accepted at Crater Lake National Park. 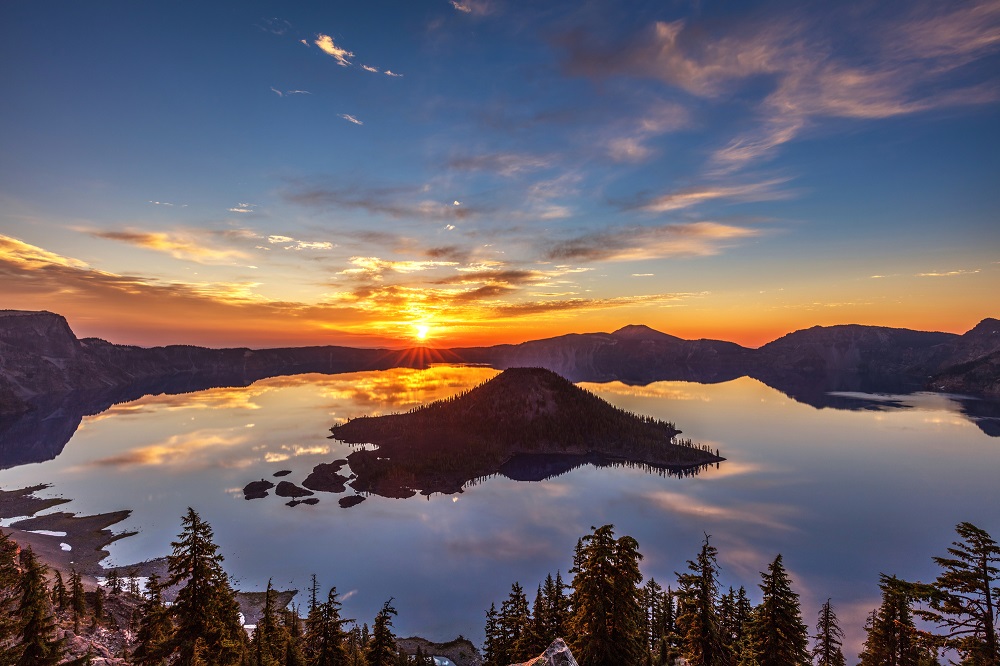 The 33 mile historic scenic drive has 30 overlooks to view the lake and caldera. It takes approximately two hours to circumnavigate and may take longer for a larger vehicle or with frequent stops. There is also a two hour trolley tour with a minimum of five stops available. The full loop is typically open from July through October. Points of interest around the lake on the scenic drive include Rim Village, Watchman Overlook, Cleetwood Cove Trail, Phantom Ship Overlook and Cloudcap Overlook.

The trail to the boat dock requires a 1.1 mile hike over a steep vertical descent (on the way there). To return from the docks to the parking area, it requires the route to be retraced with a 700 foot climb over 1.1 miles. The climb out can take an hour or more. 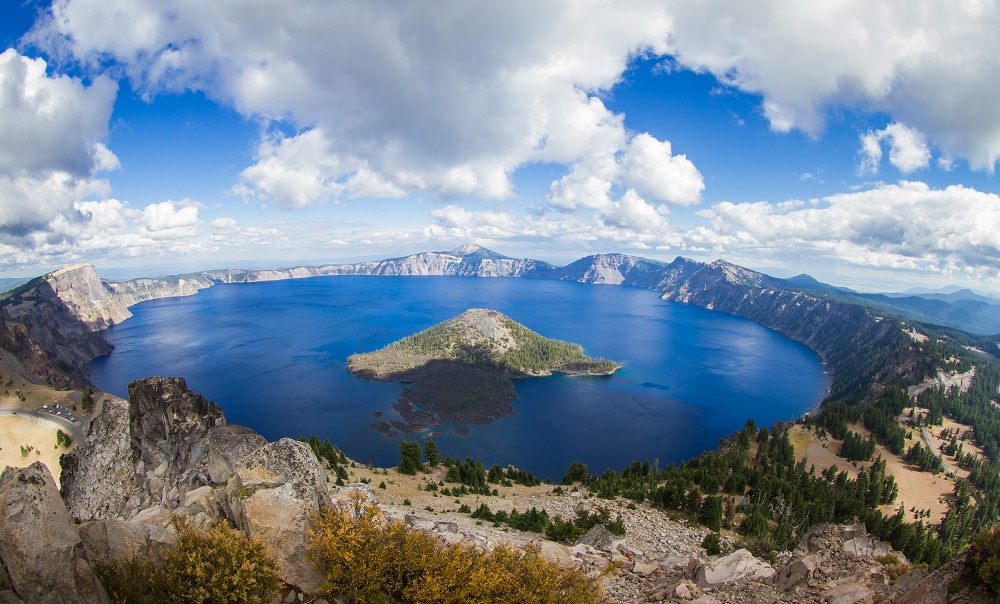 Wizard island is formed by a volcanic cinder cone on the west end of crater lake. It was named in the 1880s because of its resemblance of a wizard’s hat. Wizard Island reaches a height of 755 feet above the average surface of the lake. It emerged from the surface of the lake approximately 800 years ago, forming after the last eruption of Mt. Mazama. Visitors to the island can hike around it on a 2.5 mile round trip with a loop of the crater at the summit. There are approximately 100 plant species on the island. 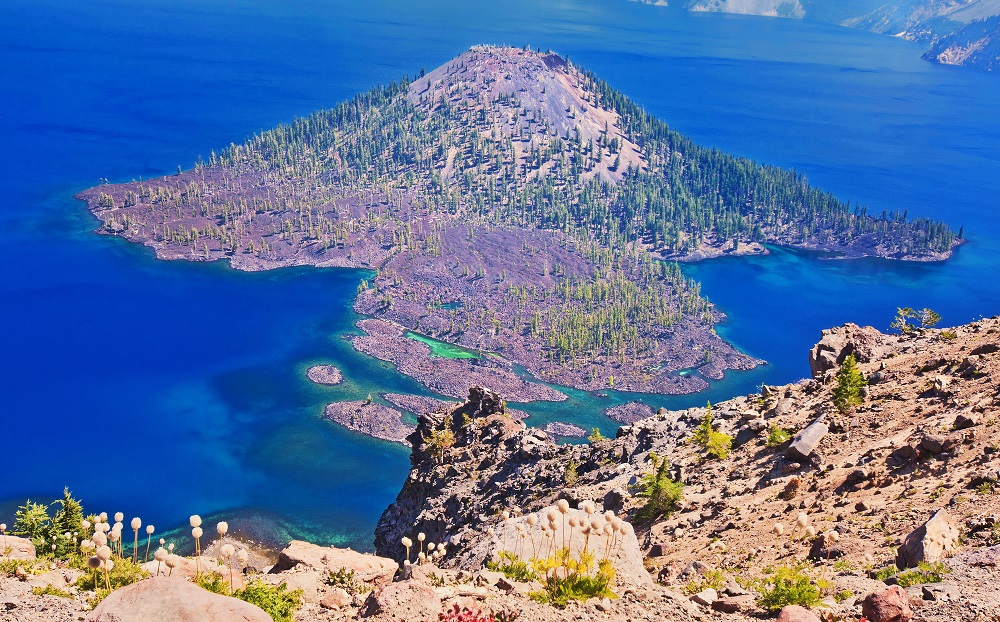 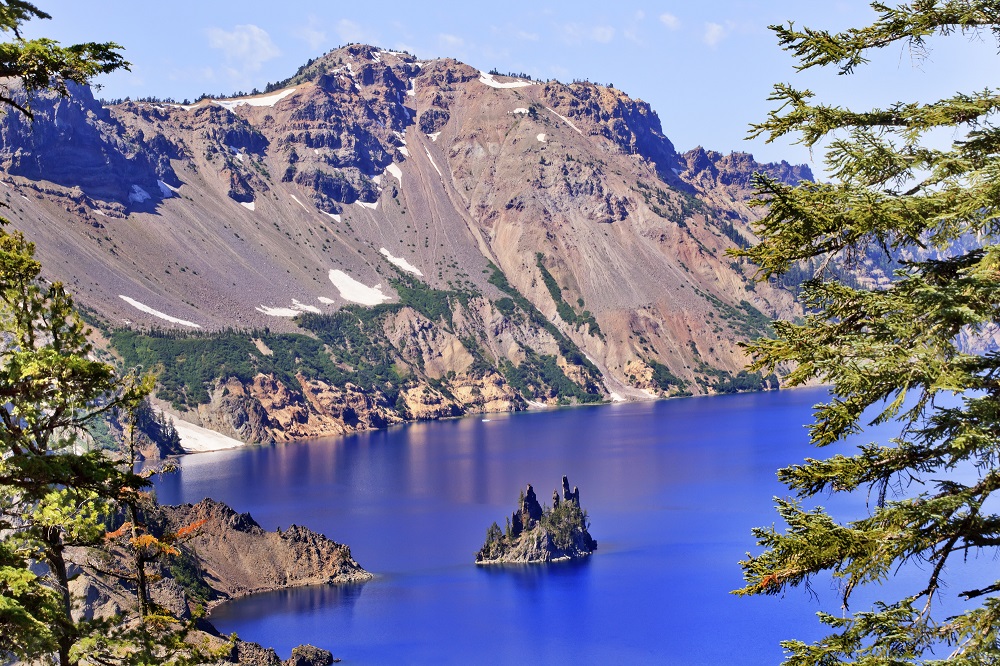 The natural rock formation was named for its resemblance to a ghost ship. It is on the southeast end of Crater Lake and is often seen from shore at the Sun Notch Viewpoint. The rocks that form the island date back to about 400,000 years ago.

Fishing is permitted from 1/2 hour before sunrise to 1/2 hour after sunset. Most fisherman who go to Crater Lake fish for rainbow trout from Wizard Island. Kokanee salmon are also in the lake. Artificial lures and flies only. Fishing is also possible from Cleetwood Cove (on the north side of the lake accessible via the Cleetwood Trail and the boat docks (when there is no boat within 200 feet of the dock). No fishing license is needed and there are no limits to the number of fish you can catch and keep. Fish must be packed out as cleaning in the lake is not allowed. No private boats or flotation devices are allowed on Crater Lake.

The Crater Lake Rim Runs and Marathon challenges a maximum of 500 participants to travel along the rim of Crater Lake in the national park for one of the most beautiful runs in the country. It offers runs of 6.7, 13.0 and 26.2 miles (the marathon) at elevations ranging from 5,980 feet to 7,850 feet above sea level. The course is paved except for the last four miles of the Marathon. If you plan to walk, there is a 6.7 mile course. All three courses have long grades of altitude gains and losses nearing 1,000 feet at a time over distances nearing five miles. The marathon is considered one of the toughest and most beautiful in the country. The race has been happening since 1976 when it was started by the Linkville Lopers, a running club from Klamath Falls. All finishers of the race receive a commemorative medal and shirt at the conclusion of the race. Plaques are awarded to age group winners and ribbons to fifth place for both male and female competitors.

Old Man of the Lake

This 30 foot tree stump has been floating upright in Crater Lake since it was first recorded in 1896. There is a four foot section of the tree which is above the water. Carbon dating puts the age of the tree, which is believed to be a hemlock, at a minimum of 450 years old. It is not understood why the log floats vertically rather than horizontally. The log is not in a fixed position, and travels around the lake. There is moss found on the log which is found in the lake at a depth of about 400 feet, so it may have once had contact with the deeper waters.

Hiking and bicycling are popular at Crater Lake.  There are more than 90 miles of trails and 33 miles of the Pacific Crest Trail passes through the park.  The 33-mile Rim Drive is popular for cyclists with most choosing to ride clockwise from the Park Headquarters.

The Pinnacles are a group of volcanic pumic spires reached by the Pinnacles Trail off the main rim trail. They are on the south side of the Wheeler Creek canyon in the southeast corner of the park. 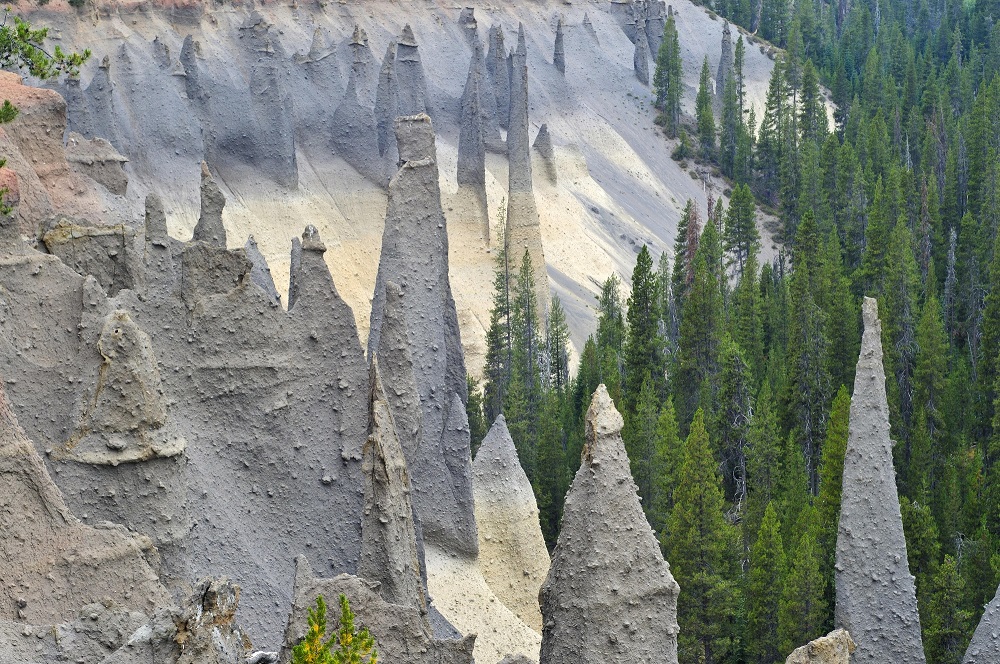 The national park is open year round. Visitors can enter via Highway 62 at the south or west entrance. The road from Mazama Village to Rim Village is open but may close if warranted by heavy snowfall. The north entrance and rim drive are closed in the winter. Winter recreation activities are typically available most days in November through May. Opportunities include cross country skiing, snowshoeing, ranger-guided snowshoe walks, snowboarding, sledding, downhill skiing, snowmobiling, and winter backcountry camping.

There are two campgrounds in the park. Mazama Campground is the largest with 211 sites available from mid-June to early October. It is located at the Annie Springs entrance near Highway 62.

Lost Creek Campground is a smaller and more secluded location three miles off East Rim Drive. There are 16 tent-only sites with cold water and toilets. Lost Creek is open from mid-July to mid-September.

Backcountry camping is also an option with a permit. The permit is required for trail hikers camping overnight in the park.

The Mazama Cabins are operated by Xanterra Parks & Resorts and located seven miles south of Rim Village. The 40 rooms/cabins are available for rent from late May to early October at a cost of $152 per night.

Crater Lake Lodge, operated by Xanterra, is one of two motels operated by Xanterra Parks & Resorts inside the national park. The lodge’s 71 guest rooms are available from late-May to mid-October. The historic lodge was originally opened in 1915 and was extensively renovated in 1985 to return it to its 1920s charm. 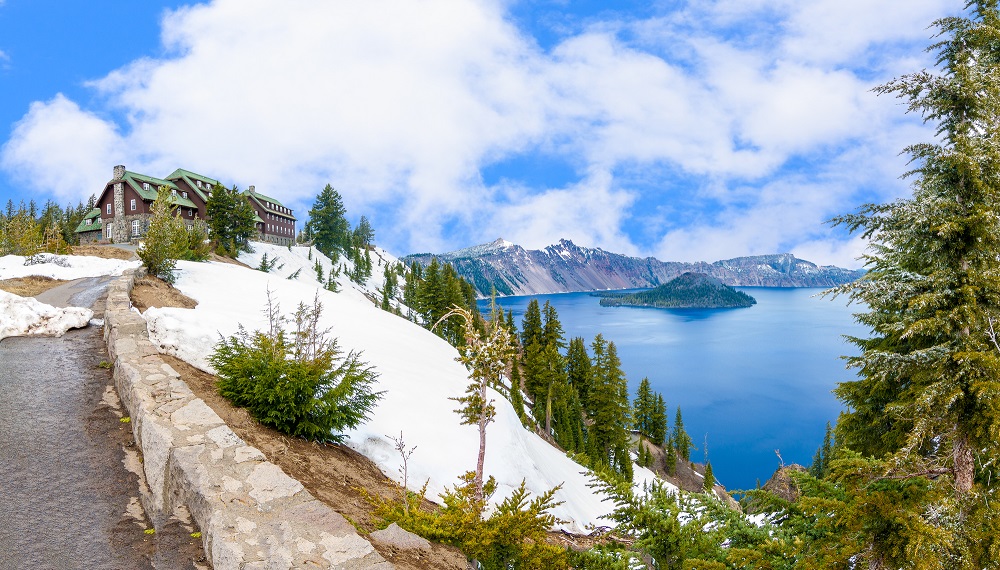 There are a number of hotels within one to two hours for those traveling into and out of the area. Highway I-5 lies to the west of the park and US Route 97 lies to the east of the park, offering visitors traveling north and south through the area a number of local and national hotel options. The closest cities with lodging options are Fort Klamath and Chiloquin to the south and Chemult to the north. Both are about one hour or so away. More options are available at Bend and La Pine between 90 minutes and two hours to the north, and Klamath / Altamont to the south along Highway 97. I-5 present a number of hotel options to the west, but are best used when entering or exiting the park as they are two hours or so away.

The closest airports to Crater Lake National Park are located at Klamath Falls (east) and Medford (west). Larger airports are located in Eugene (2 hours away) and Portland, Oregon (4 hours away). The Klamath Falls airport is known as Crater Lake-Klamath Regional Airport, but the number of flights going in and out is unknown / limited. Rogue Valley International – Medford Airport (MFR) appears to be a better option as it has connecting flights from Seattle, Los Angeles and San Francisco. The Eugene Airport (aka Mahlon Sweet Field) is another good option as it is the fifth largest airport in the Pacific Northwest. Both Medford and Eugene have car rental options to help travelers reach Crater Lake. 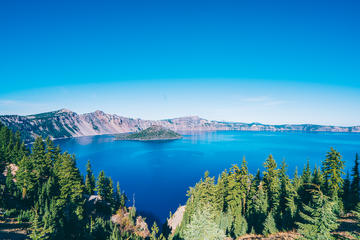