A “Must See” National Park in California.

Yosemite: more than 1 million square miles of park in California.

A national treasure protected by the park system with giant sequoia trees, majestic waterfalls and spectacular granite cliffs. Located two hours west of Modesto, it’s beauty was captured by Ansel Adams in some of the country’s most iconic photos. Highlights of the park include Bridalveil Fall, Half Dome and El Capitan.

A settlement and thoroughfare which was added to Yosemite National Park in 1932.  It contains the authentic Victorian Big Trees Lodge (formerly Wawona Hotel), the Wawona Visitor Center at Hill’s Studio, Pioneer Yosemite History Center and access to nearby Mariposa Grove.

The largest of three sequoia groves in Yosemite with more than 500 mature giant sequoias. A popular destination in the park, though the area is closed through Summer 2017 for a restoration project.

A large sub-alpine meadow surrounded by majestic mountain peaks and home to the winding Tuolumne River.

A valley and a reservoir in the northwest corner of Yosemite National Park that is just over an hour by car from Yosemite Valley.  Although this glacier-carved valley once resembled the awe-inspiring Yosemite Valley, Congress in 1913 permitted San Francisco to dam the Tuolumne River to provide water for the Bay Area.

A vertical rock of sheer granite on the northwest side of Yosemite Valley.  It rises about 3,600 feet above the valley floor.  The moderately used hiking trail is a 14+ mile out and back that is difficult and only recommended for in-shape hikers.  For climbers, El Capitan is one of the ultimate challenges in the world.  It is also one of the most photographed sections of Yosemite.

Half Dome is a popular destination for a round trip hike of about 15 miles for those who are in shape and prepared. It rises 5,000 feet above Yosemite Valley. In 1865, a report concluded that it would never be trodden on by human foot.

Now, it is done on a daily basis. A maximum of 225 day hikers and 75 backpackers are allowed on the trail up Half Dome each day. Permits are required. Backpackers apply for a Half Dome permit with their wilderness permit if they are starting in the park. If they are starting outside the park, then they apply for it through the process for day hikers. Day Hikers apply through a preseason lottery or the daily lottery. The daily lottery makes available about 50 permits each day due to cancellations and under-utilization.

This iconic view of Yosemite Valley on State Route 41 was made famous by Ansel Adams. The overlook opened in 1933.

This scenic overlook is located at the end of Glacier Point Road, 3,200 feet above Half Dome Village at an elevation of 7,214 feet. It is a popular 32 mile drive from Yosemite Valley, but parking can be a challenge. It is also accessible by the Yosemite buses. The road usually closes due to snow in November and reopens in late May or early June.

A 2.2 mile roundtrip hike from the parking area off Glacier Point Road brings visitors to a scenic overlook of Yosemite Valley from a sheer cliff. There are two classic Yosemite photo spots here at the end of the trail. It is named for President William Howard Taft, who visited Yosemite in 1909 with John Muir and came across the point.

There are more than twenty waterfalls in the park, although some are only visible during the runoff of melting snow from March through June.

Bridalveil Fall: Bridalveil is the first waterfall seen when entering Yosemite Valley and one of the most photographed in the park.   Although the 620 foot drop in Bridalveil Creek can be seen year round and is heaviest in spring, it is known for the windswept look that resembles a bride’s veil when the snow runoff has subsided.

Sentinel Falls: Sentinel is a tiered waterfall with six major drops as it cascades 2,000 feet in the south side of Yosemite Valley along Sentinel Rock.  It is usually visible from March through June.

Horsetail Fall: This waterfall which can be seen from December through April is best known for its reflections of the orange sunset in mid to late February.

Yosemite National Park is one of the premier places for rock climbing and bouldering in the United States. It is considered the birthplace of American rock climbing as well as multi-day climbing. The Half Dome and El Capitan are both epic climbs. Bouldering, which is usually done on rocks available 15 or fewer feet above the ground, is also popular at Camp 4, Tuolumne Meadows and Candyland.

June and July are the peak months for wilderness backpacking. The most popular overnight destination is Little Yosemite Valley. For serious hikers, take the John Muir Trail for 211 miles from Happy Isles through Kings Canyon and Sequoia to the top of Mt. Whitney.

Permits are required as there are daily trailhead quotas. Permits can be obtained up to 24 weeks in advance. 40% of permits are reserved from advanced reservations and available on a first-come, first-served basis at several locations in the park starting at 11 AM on the day before.

Lakes and reservoirs are available for fishing year round while stream and river fishing is open from late April until mid-November. Rules vary depending on location and elevation. Try trout fishing in the Merced River, the Tuolumne River or while boating in Tenaya Lake.

Sandy beaches for swimming are located at several alpine lakes and local rivers, including the Merced River, Tuolumne River, and Tenaya Creek. The water can be chilly, however. Swimming is prohibited above waterfalls and at Hetch Hetchy Reservoir. There are also swimming pools for a nominal fee at Curry Village and Yosemite Lodge from Memorial Day to Labor Day.

Yosemite National Park campgrounds are a popular place to stay.

There are seven campgrounds where reservations are allowed.  Nearly all reservations Yosemite campgrounds for the months of May through September and some other popular weekends are filled the first day they become available and it can occur within minutes of opening to reservations.  Reservations open on the 15th of each month at 7 AM Pacific time for a one month block up to five months in advance. 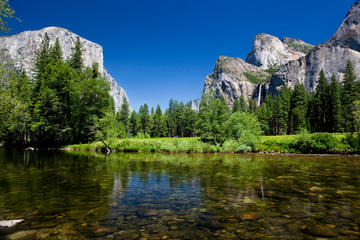 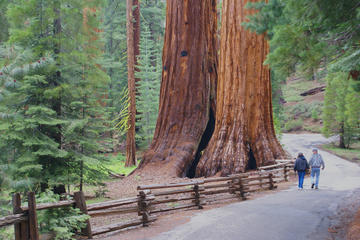 2 Day Yosemite Tour from San Francisco, with Lodging, $429 via Viator 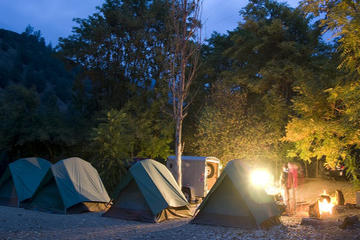 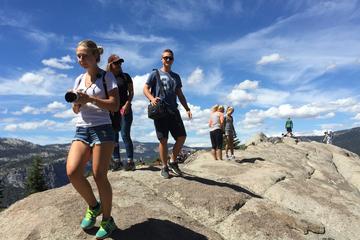 Yosemite and Glacier Point Day Trip from Fresno, $129 via Viator 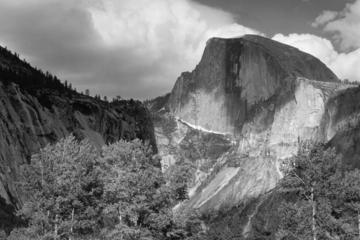 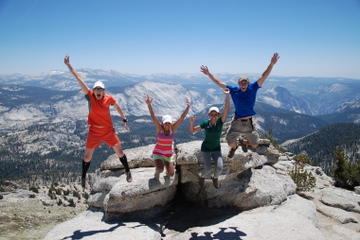 Round Trip Flights to San Francisco