One of the Seven Natural Wonders of the World.

This is by far the most popular destination in the park with more than four million visitors a year travelling here (90% of park visitors). The South Rim is open year round and includes Grand Canyon Village. The Village has a visitor center, four large parking areas, a business center (general store, bank and post office), and the railroad depot. There are six lodges inside the park at the South Rim and a few more hotels in the small town of Tusayan which is about 7 miles away from the South Rim.

The North Rim is open seasonally from May 15th to October 15th. It is more remote and less visited than the South Rim or West Rim. Although the hike across the canyon from South Rim to North Rim is just 21 miles, it is a 5 hour drive (220 miles) between the two park locations. The entrance to this section of the park is located on Highway 67 (30 miles south of Jacob Lake). There is one lodge and one campground on the North Rim. Reservations are recommended for both.

Desert View is a small settlement 25 miles east of Grand Canyon Village. It provides views on a clear day of over 100 miles. There is a campground, general store and gas station here.

Tuweep and Toroweap is on the northwest rim and offers a 3000 feet vertical drop at the overlook. There are minimal services and improvements at this location.

The Grand Canyon Skywalk on the Hualapai Indian Reservation opened to the public in 2007. It is a U-shaped cantilevered glass walk that allows guests to go 70 feet past the rim and stare 2,000 feet down to the bottom of the canyon. To experience this marvel of natural and human engineering requires the purchase of the Legacy Gold Package ($80.94 per person) at Grand Canyon West. More than 1 million people a year travel from Las Vegas to the West Rim to experience the Skywalk. Note: personal cameras and cell phones are not permitted on the Skywalk.

Long before the automobile, train tracks were run from Williams, Arizona to the Grand Canyon to allow people to view the breathtaking Colorado River gorge. The opening of the railroad in 1901 cut both the cost of the trip as well as the amount of time it took to travel. The eight hour, $15 stagecoach ride from Flagstaff to the Grand Canyon became a $3.95 train ride over 65 miles of track from Williams.

The passenger railroad closed in 1968 because of the popularity of the automobile. Twenty years later, passenger service on the Grand Canyon Railway was restored. More than 100,000 people a year now take the train to the Grand Canyon, just as visitors did in the early 1900s.

South Rim: Campgrounds on the South Rim include Mather Campground, Trailer Village and Desert View Campground.  Mather is open year round for tents and RVs up to 30 feet in length.  Reservations are recommended from March through mid-November.  Trailer Village is a concessioner operated RV Park adjacent to Mather with full hookups and sites up to 50 feet in length.  Desert View is a seasonally open campground with 50 campsites that can accommodate tents and smaller RVs or travel trailers up to 30 feet.  It is filled on a first-come, first served bases and is generally full by early afternoon in the summer.

North Rim:  The North Rim Campground has 90 campsites with a view located where there are good canyon views.  Reservations are required from May 15 – September 15.  Tuweep Campground is a primate campground with no water or electricity that has ten campsites and requires a backcountry permit.  Getting to Tuweep can be difficult due to long, unpaved roads known for creating flat tires.

In the Canyon:  Bright Angel Campground is the only established campground at the bottom and is open year-round.  It is located about a half mile from the Colorado River and has available drinking water and toilets.  Backpackers reach it from either the Bright Angel Trail or the Kaibab Trail (South from the South Rim, North from the North Rim).  There is also a cantina with cold beer and ice cream a short distance away at the Phantom Ranch.  Summer temperatures there can exceed 100 degrees Fahrenheit.  Other campgrounds include the Indian Garden Campground on the Bright Angel Trail and the Cottonwood Campground on the North Kaibab Trail.  Backcountry permits are needed to camp in the canyon and demand exceeds supply.  Written permit applications can be submitted four months in advance. 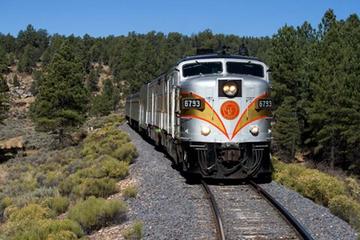 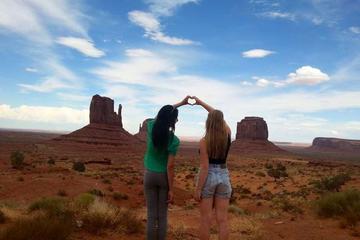 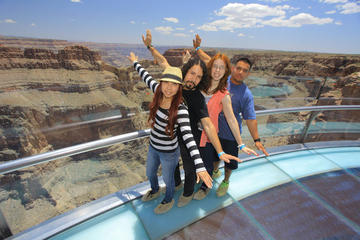 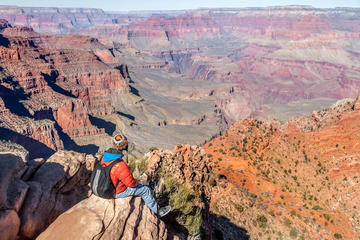 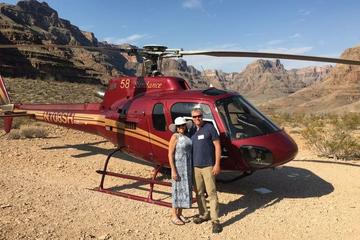 Morning or Afternoon Helicopter Tour from Las Vegas with Champagne Picnic, $346.99 via Viator 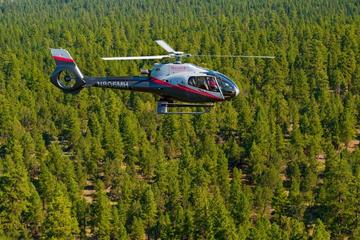