An impassable barrier running across Utah

Capitol Reef National Park protects the largest exposed monocline in North America, which is located in southcentral Utah.  The Waterpocket Fold is a 100 mile barrier running North and South through the park that is about 65 million years old and to this day is still rarely breached by roads.  The park received its name because the impassable ridges were referred to as “reefs” by early settlers.

Archaic hunters and gatherers migrated through the canyons thousands of years ago. The Fremont culture first evidenced about 500 CE, with food foraging groups and farmers of corn, beans, and squash, settling in the area. Petroglyphs remain today, etched into the walls. as well as painted pictographs. In the 1800s, explorers, Mormon pioneers, and others arrived, settling in the area and planting orchards of apples, pears, and peaches. The park was established in 1971.

An entrance fee of $10 for motorcycles and $10 for private, noncommercial vehicles is charged at entry. The passes are good for seven days. The park offers an annual pass for $30 that is good for 12 months from the purchase date. The national park pass ($80), senior pass ($10) and other national park passes are accepted at Capitol Reef National Park.

Capitol Reef has trails for hikers of every skill level.  There are 15 day hiking trails with trailheads in the Fruita area.  Backcountry hikers might consider the southern sections of the park, the Cathedral Valley area, or even Fruita.  Before setting off on a hike, remember that it can get hot in this area and water is limited.

Fruita Campground (71 sites) is the only developed campground in the national park.  Cathedral and Cedar Mesa Primitive Campgrounds are located in remote parts of the park and do not have water.  Backcountry camping in the park is allowed with a free permit, subject to regulations on the location.

Torrey, located eight miles to the west of the visitor center on State Route 24, is the gateway to Capitol Reef.  Despite its small size (population ~ 200), it has privately operated hotels, cabins, bed and breakfasts, campgrounds and RV parks. 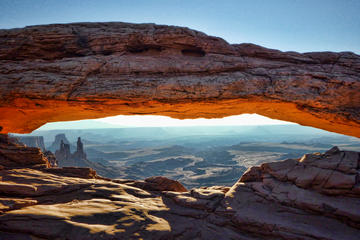 More than 1 million people annually visit Capitol Reef National Park despite the fact that National Geographic in 2009 described Capitol Reef as so remote that the nearest traffic light is 78 miles away. The Waterpocket Fold is an impressive geological feature that runs north-south for 100 miles. It is the largest exposed monocline in North America. The park also contains a ghost town which was established in 1880 by a group of Mormons that was abandoned when the National Park Service purchased the land from the private owners.

Can you drive through Capitol Reef National Park?

Most visitors drive through Capitol Reef on the Capitol Reef Scenic Drive which winds through the heart of the park and State Route 24 which is the only paved road to cross the Waterpocket Fold.

How many days do you need in Capitol Reef National Park?

You can drive across the park on State Route 24 in thirty minutes to an hour. A half day to a full day allows you to explore Fruita, the scenic drive and more of the park. A three day, two night long weekend will allow you to explore the other sections of the park and go hiking. A week will give you time to explore as well as to enjoy a backcountry hike to explore the gorges, slot canyons and viewpoints around Waterpocket Fold.