After a brief cold spell in the Philadelphia area, we had another 50+ degree day today and I took the opportunity to walk around the John J Audubon Center at Mill Grove in Audubon with our Canon SX60 camera to take pictures of the birds in the area. I also crossed Perkiomen Creek and walked the trail through Lower Perkiomen Valley Park.

A few months ago, we had the opportunity to walk around the Audubon Center with cameras provided by Canon – a Canon 5D Mark IV and a Canon EOS RP. We posted a few of our photos from that bird walk in October previously, but we definitely missed the superzoom on our SX60, since the incredible 70-200mm F/2.8 lenses that Canon lent to us simply did not have the same reach.

Today was a great day birding as I saw a number of hawks, mergansers, 2 great blue herons, a male and female cardinal, and a number of other birds. The only problem was that it was a bit muddy off the trail today, and my jeans and shoes suffered a bit for it. I also missed both photo opportunities with the great blue herons, leaving me with three blurry tree photos from the first heron and a completely black photo taken with the lens cap on instead of the image that I saw of the heron flying over the river.

Before we get to the bird photos, there was a point where I was walking down to the creek crossing a small stream and came across these flowers just coming out of the stream bed. 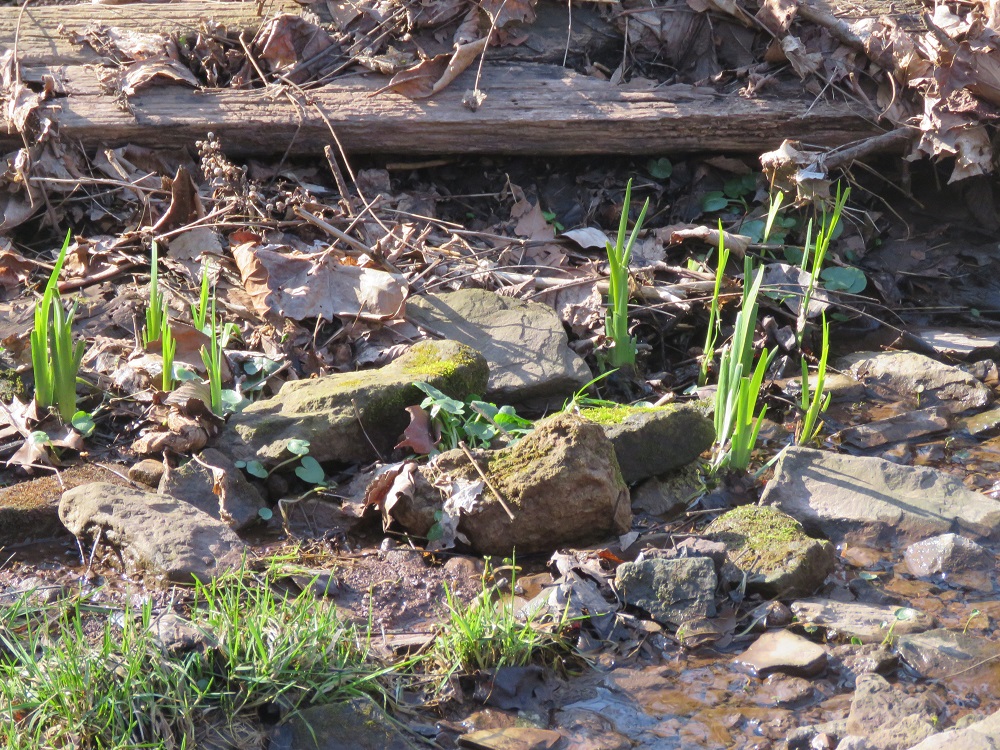 The first bird that I saw on the walk was the hawk pictured below. It flew right in front my path and then landed in a nearby tree. I got a few photos of it before it shifted to a different position in the tree, and then a few more photos before it flew away. In total, I saw at least five (and maybe six) birds of prey today. 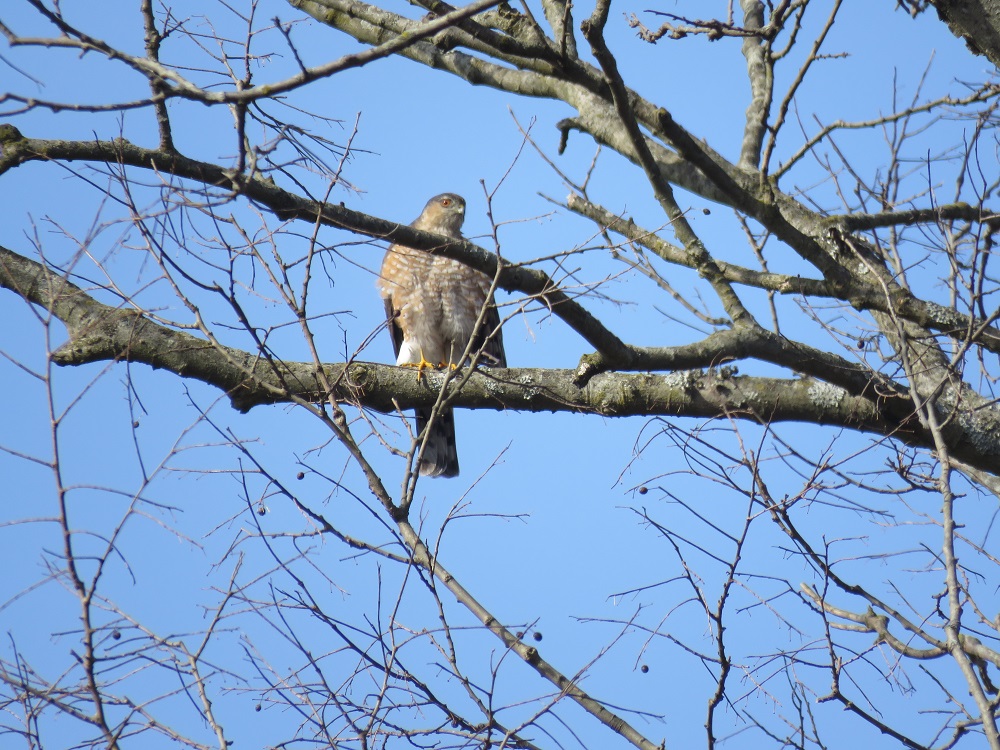 The hawk that I got the best photos of hit the ground across the street from me while I was on the trail. It must have done a dive bomb after some food and came up short. It looked around a bit while it was standing on the ground and then jumped up onto a branch lying on the ground. 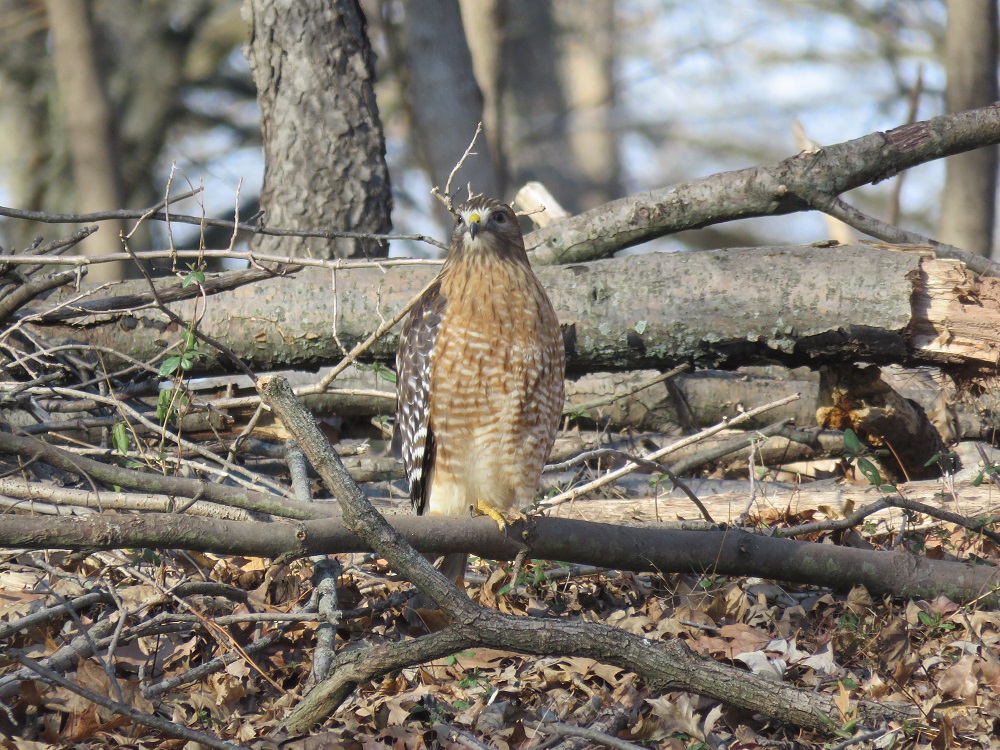 After a while sitting just off the ground, it moved into a nearby tree. I was able to take a bunch of photos and reposition twice to get a better view of the hawk. 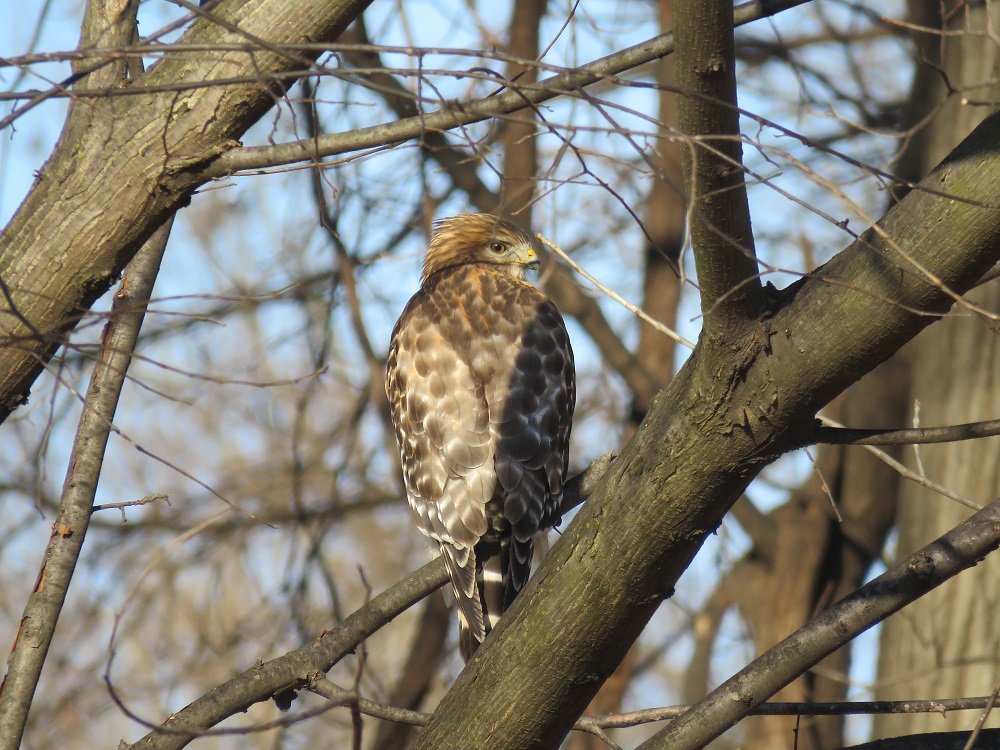 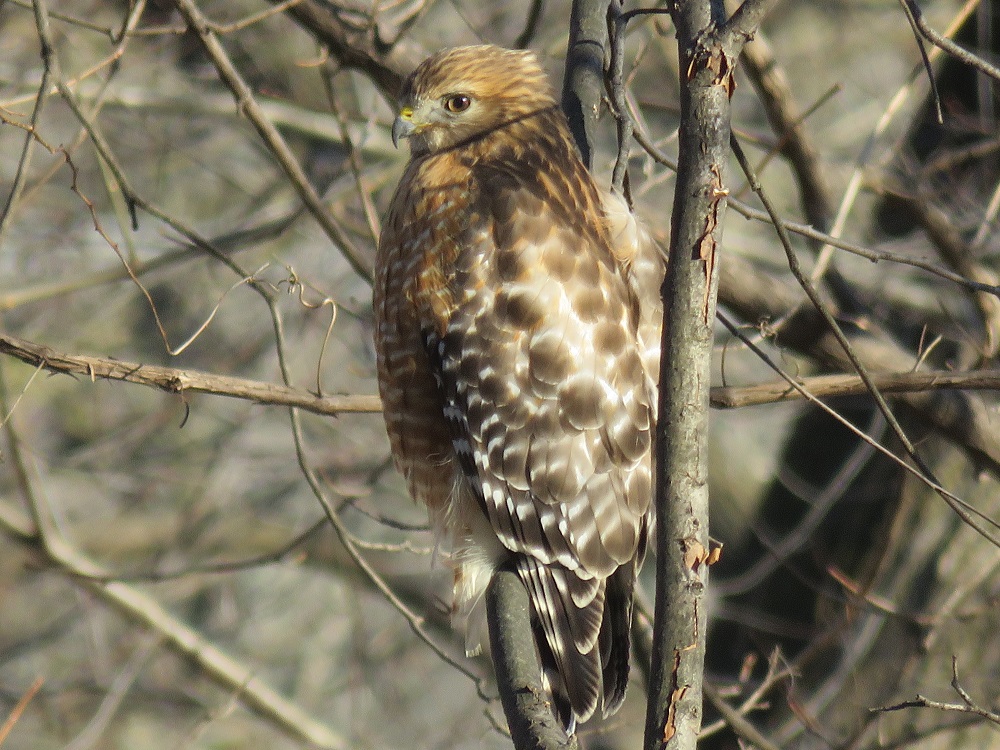 When I was down by Perkiomen Creek on my walk, I saw a few merganser on the water and some Canadian Geese. The merganser were pretty far away so I wasn’t able to get a great picture of them. On my way to the other side of the creek, I ended up seeing the profile of another big hawk (I thought at the time it might have been an eagle). I didn’t get any great photos of it, but I did see this pair of nesting hawks fly out of their nest and sit in a nearby tree: 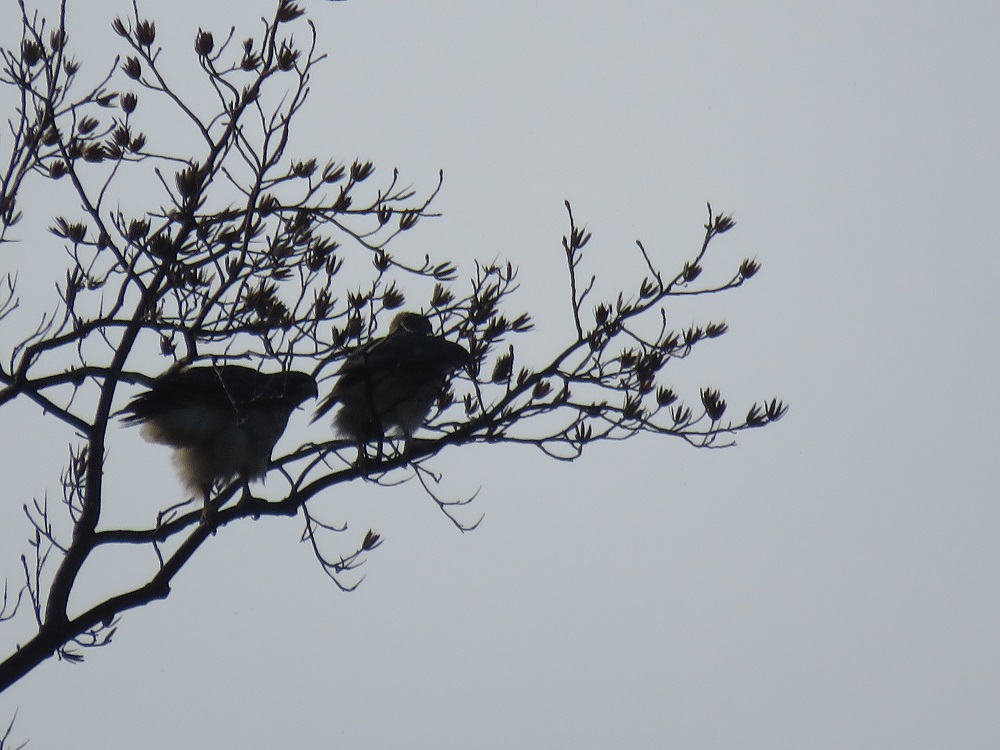 This hawk was the last I saw on the day, sitting above the trail in a tree as the sun was setting. Since the sun was behind the hawk, it was tough to get a good photo of it at first. However, as I passed underneath it on the trail, I was able to take a few better pictures with the setting sun to my back: 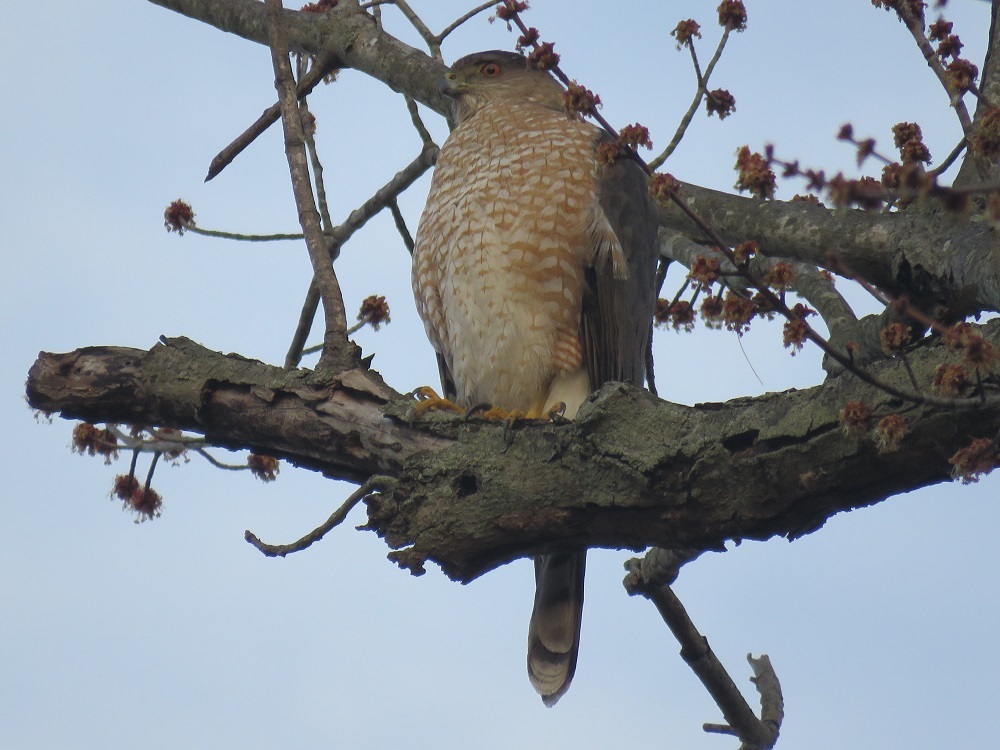 It has been a while since I have been able to get so many close hawk photos in one day. Two of the new birds that I saw today were the hooded merganser and the common merganser: 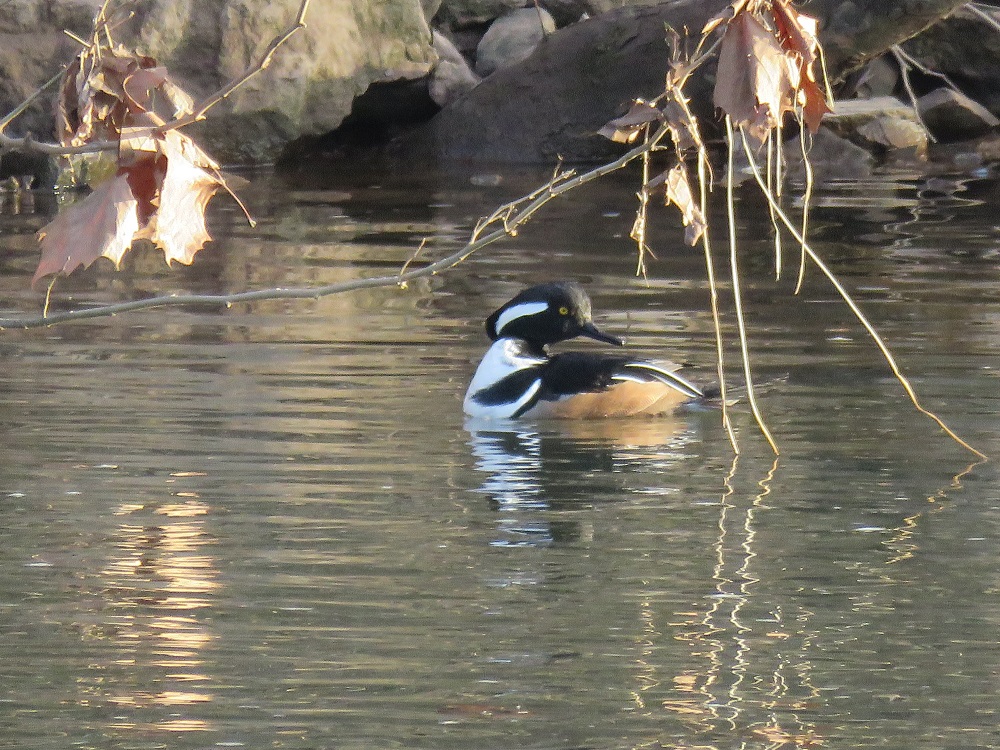 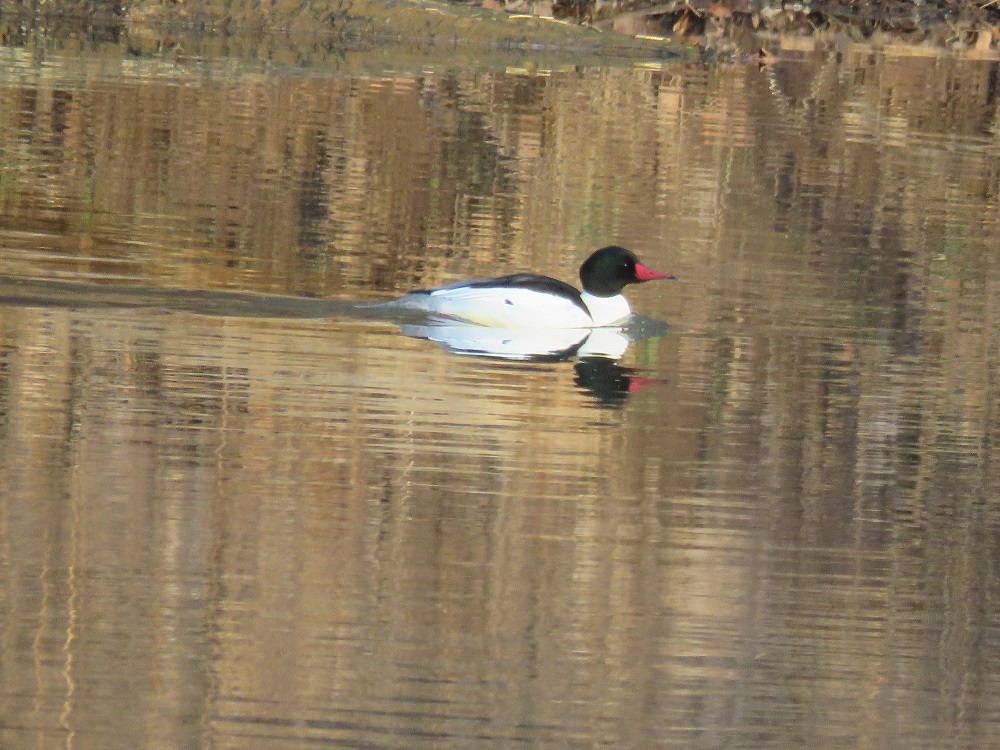 There were also a half dozen or so Canadian geese near the dam in the creek, and I was able to get a couple good shots where the goose was reflected in the water: 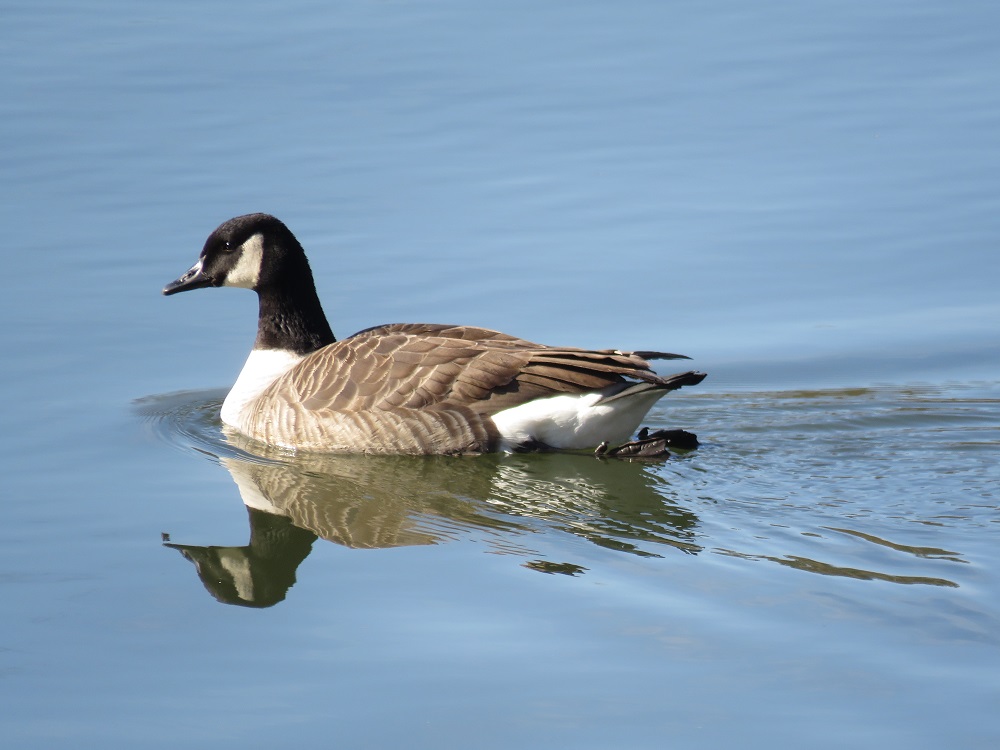 I missed a ton of photo opportunities with smaller birds today. I probably took a couple dozen photos of blurry birds and tree branches across three hours. There was at least a ten minute period where I focused on a single bird flying between the trees in front of me and I never did manage to get an in-focus photo where the bird was not behind some twigs or tree branches. I did manage to get a good shot of this woodpecker at another point since there was one point where there were a half dozen or more in the surrounding trees: 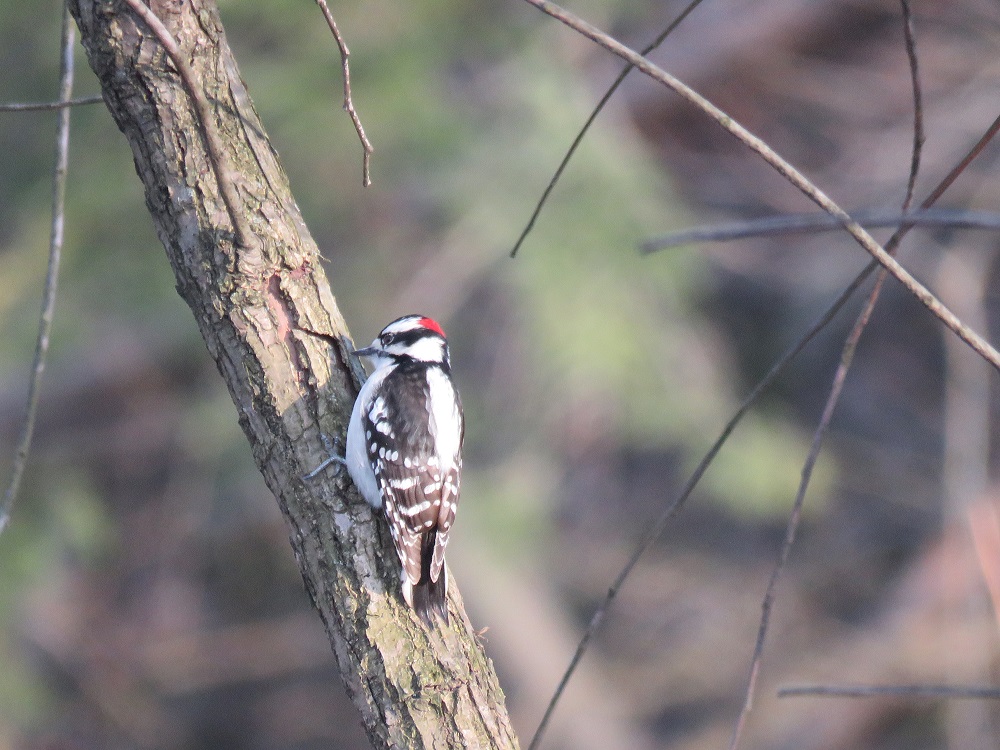 When I was trying to solve the problem of how to improve the photographs on the final (then backlit) hawk of the day, I did take a moment to admire the beautiful sunset behind the tree. 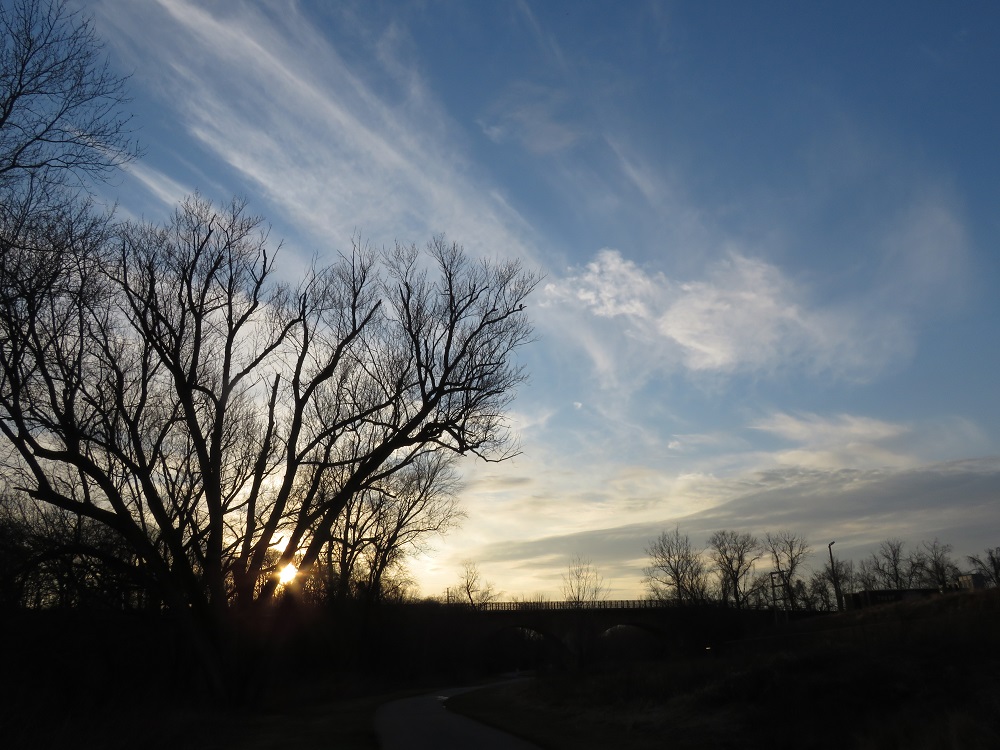 We grabbed dinner on the way home where I recapped the days events to my lovely wife and showed her the photos that I took today. She has been taking more and more of the photos lately, since she has the steadier hand and we are almost always shooting near the limits of the superzoom telephoto lens.