After concluding two days in Grand Teton, we headed north to Yellowstone National Park. We found it hard to tear ourselves away from the remarkable beauty of the Grand Tetons, but we would soon come to find out why Yellowstone is considered the crown jewel of the park system.

We entered Yellowstone via the south entrance on John Rockefeller Jr Memorial Highway. Since it was the Thursday before Memorial Day weekend, we skipped our usual leisurely road trip sightseeing and headed straight to the campgrounds that had already opened for the season. Along the way, we crossed over the Continental Divide, passed the Old Faithful viewing area, and drove along the Firehole River. It was hard not to stop, but we needed to secure a campsite before everyone else filled them up. Madison Junction, which takes reservations, was completely booked for the weekend, so we continued our journey to Norris Campground.

When we arrived, the park ranger recommended W6, which was an available walk-in spot overlooking the meadow. The site had a wonderful view of the meadow and was near the Gibbon River, which meanders next to the campground. We would definitely take the spot again as it was beautiful. It was cash only, so we paid for one night and planned to get more cash later to pay for the rest of our visit. After we set up camp and put our cooler in the bear locker, we decided to head north and explore Mammoth Hot Springs. On the way between Norris and Mammoth, keep your eye out for the spectacular canyon at Rustic Falls – you can’t miss it.

Mammoth Hot Springs is a travertine hill with a large collection of hot springs overlooking Mammoth near the northern border of Yellowstone. Accessed by boardwalks from the parking lots above and below the hot springs, it is an impressive geological display that will leave you with the rotten egg smell from hydrogen sulfide, but a lifetime of memories. After we walked the area from bottom to top and back, we drove down to Mammoth to explore the Historic District (and borrow their WiFi). 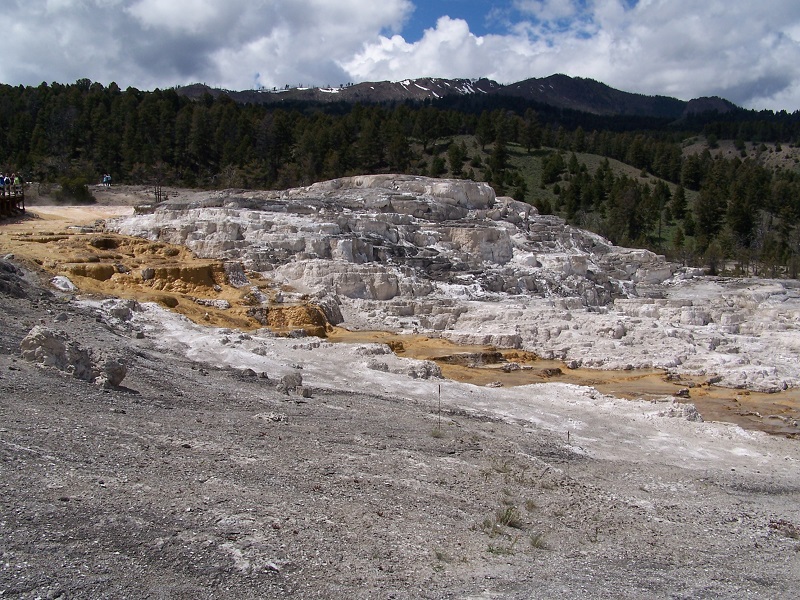 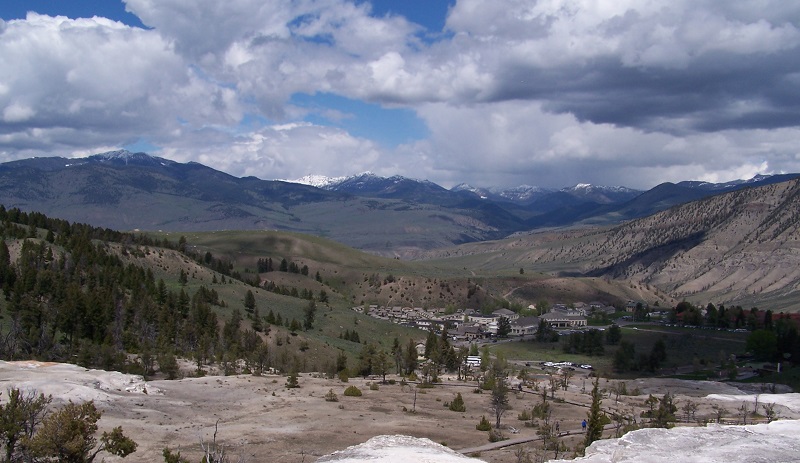 (Mammoth, Wyoming from the top of Mammoth Hot Springs)

When we had finished sharing the double ice cream cone-in-a-bowl of chocolate and salted caramel that we found at the Grill, we ventured out of the park to Gardiner, Montana. Neither one of us had ever been to Montana before. We stopped at the grocery store, and played a game of checkers at a small pharmacy over coffee.

On our way back to Mammoth, we pulled over quickly to take a picture at the 45th parallel. We were halfway between the equator and the north pole together for the first time (though not the last for the year). As we were just starting to explore the park, we turned to go to Tower/Roosevelt. On our way to Tower/Roosevelt, we stopped momentarily at Floating Island Lake, where photographers were waiting to catch a moose out for an evening swim. We didn’t see any there, so we moved on.

A short while later, we came across a crowd of cars parked on oth sides of the road. Traffic came to a halt, and we realized that there were two bears (mom and cub) playing on a small hill across the valley. We took a few photographs, but I really wish that we had the telephoto lens that we would buy later in the year. 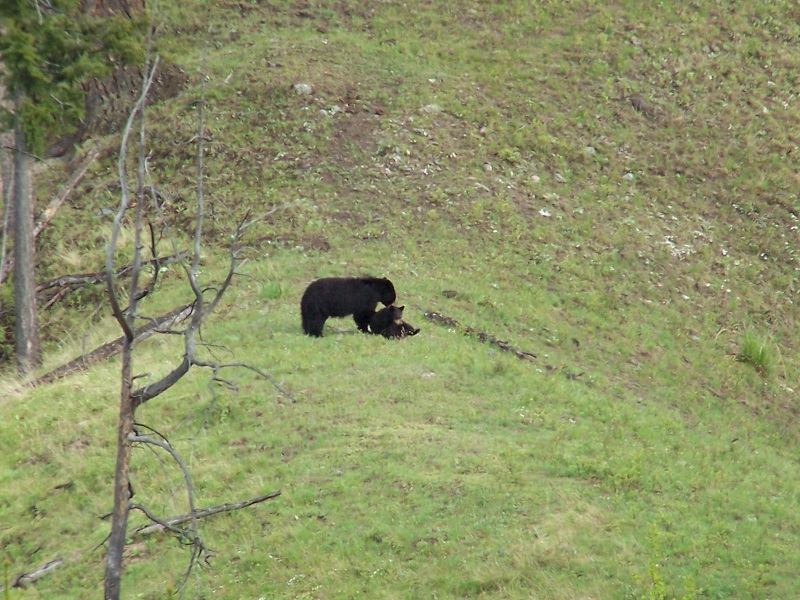 We stopped at the Petrified Tree next. The tree was buried alive in volcanic ash and landslides about 50 million years ago after a series of volcanic eruptions. Of the three petrified trees at Yellowstone – only 1 remains. Tragically, the rest were taken in pieces as souvenirs by visitors before a fence was erected to protect the tree. 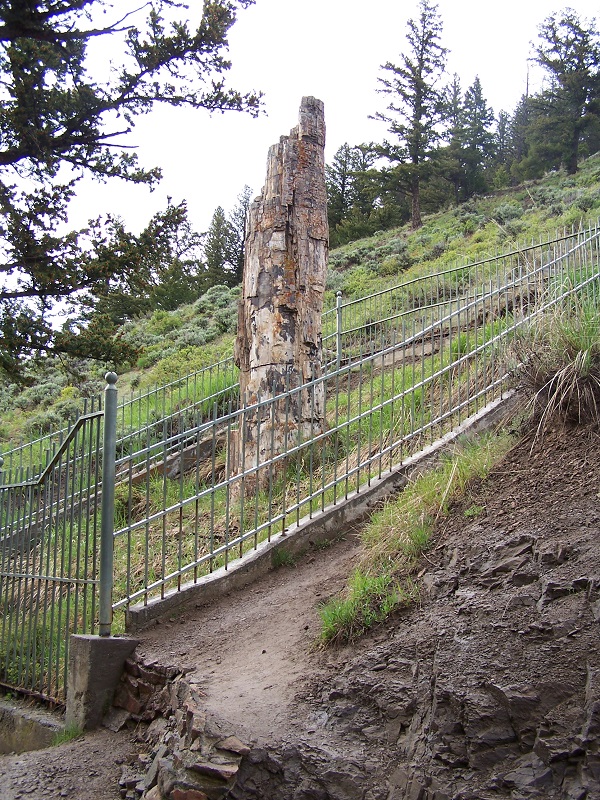 We continued on, stopping next at a parking lot overlooking the Calcite Springs across the valley. The spring is named for the milky-white calcite crystals in the area. We could see both the springs and the black on the surface from the oil and molten sulfur which are released by the undergound fractures. 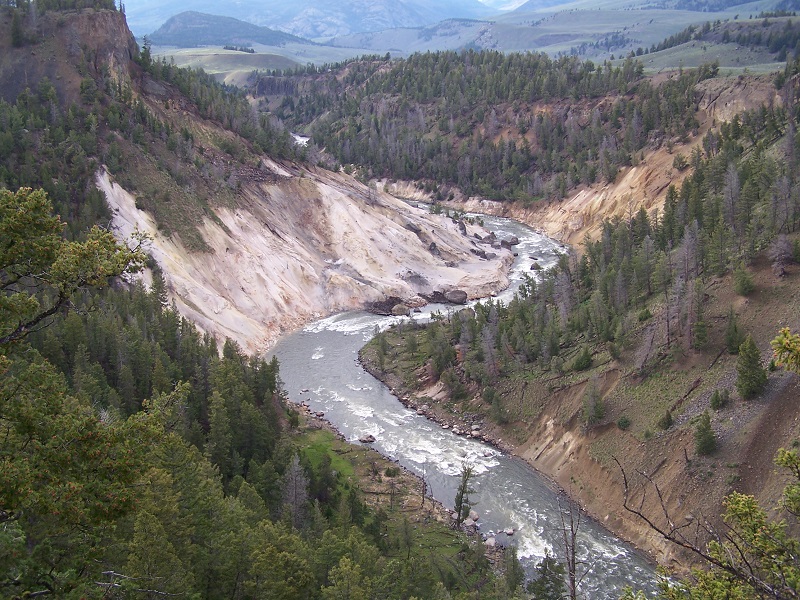 After leaving the lot, we saw another bearjam – as we would call the traffic jams from the groups of visitors and photographers that were watching a bear. This time, we saw a mother and cub along the road. The mother, worried about her cub and the close proximity of the people, sent the cub scurrying up a tree.

Tower/Roosevelt is known for the large waterfall in the area, Tower Fall, and Roosevelt Lodge, a historic district with 130 buildings in an area popular with President Theodore Roosevelt. Tower Fall was a short walk from the road but well worth seeing. Roosevelt Lodge was closed at the time so we didn’t get to drive around there. 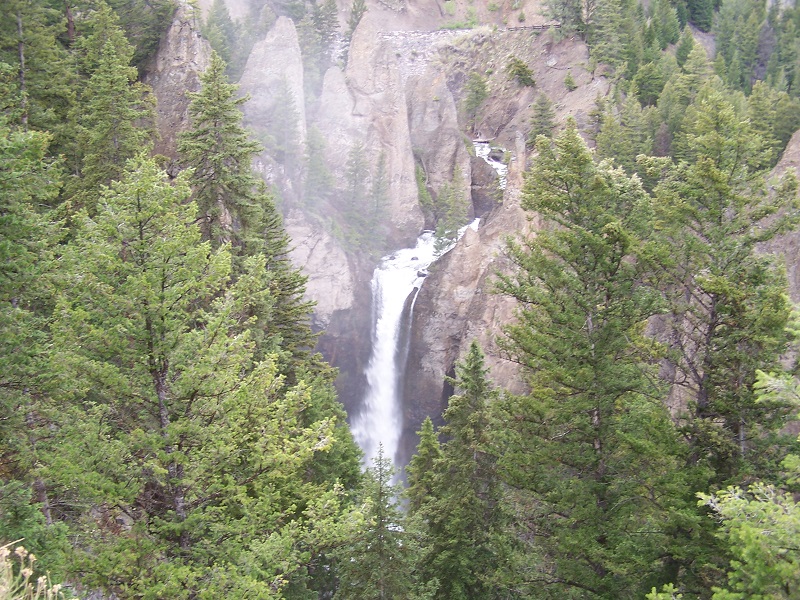 After one more bear sighting, we ascended high into the mountains. After getting through the fog and finding the snow, we stopped at a picnic area overlooking the edge of the caldera. continuing on our journey as darkness was approaching, we were soon at Canyon Village, headed along a one way road along one side of the Grand Canyon of the Yellowstone. We saw the lower falls, but rain and the late hour meant that we would have to return to see the upper falls. 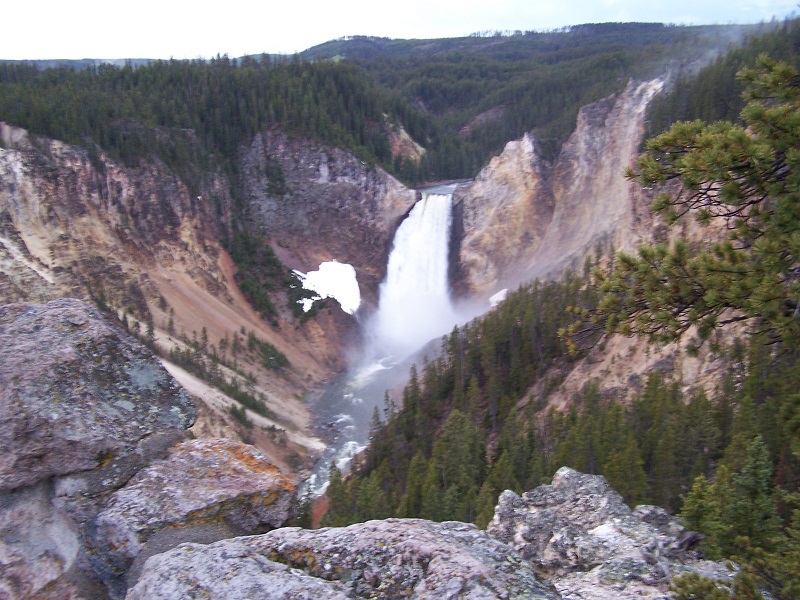 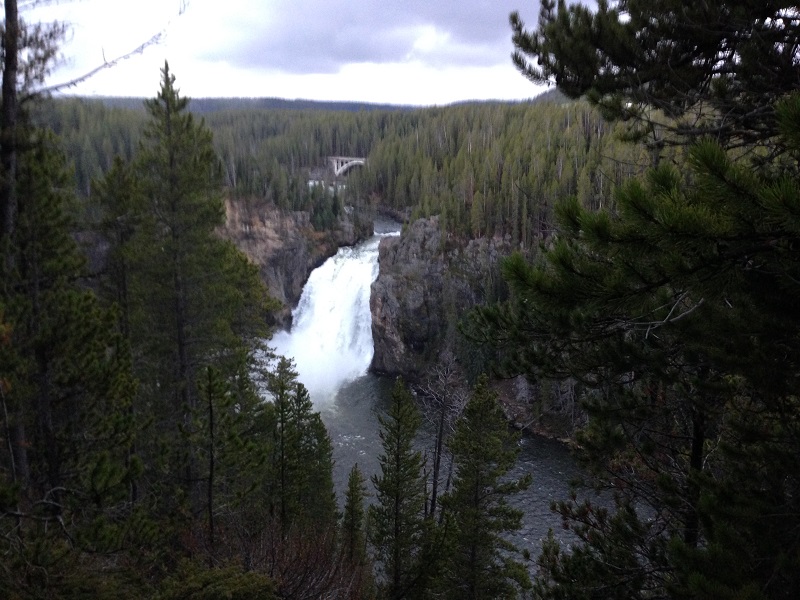 (Picture of Upper Falls from the next day)

The next morning, we got up early to see Old Faithful before the crowds. We left Norris Campground around 7:30 am to get down to Old Faithful around 8:30. It isn’t a particularly long drive, but we got stuck behind a few buffalo that thought the road made a nice trail for travel.

The visitor’s center was still closed at that time and we didn’t have internet, so we stopped into the Old Faithful Inn to get a cup of coffee and find out the next eruption time: 9:36 plus or minus ten minutes. There is a nice viewing area from the second floor porch at the Inn, but we wandered down to the boardwalk to get a closer view. The eruption started a little early but we were already in position. It was an impressive display of nature. It is something that I have been reading about since a child, and it did not disappoint.

After returning to Norris Campground to pay for the final two days of our stay, we went to the Artist Paintpots. This is a collection of geothermal features down the road from the campground. It includes mudpots and a small geyser anmed the Blood Geyser due to the red hue from its iron content. We also stopped along the road at Beryl Springs, which was a popular area for photos with the steam as a backdrop.

Gibbon Falls was another popular area to stop along the road. Gibbon River runs past the campground and along the road on the way to Madison. The elevation change is quite dramatic, making the falls quite beautiful. 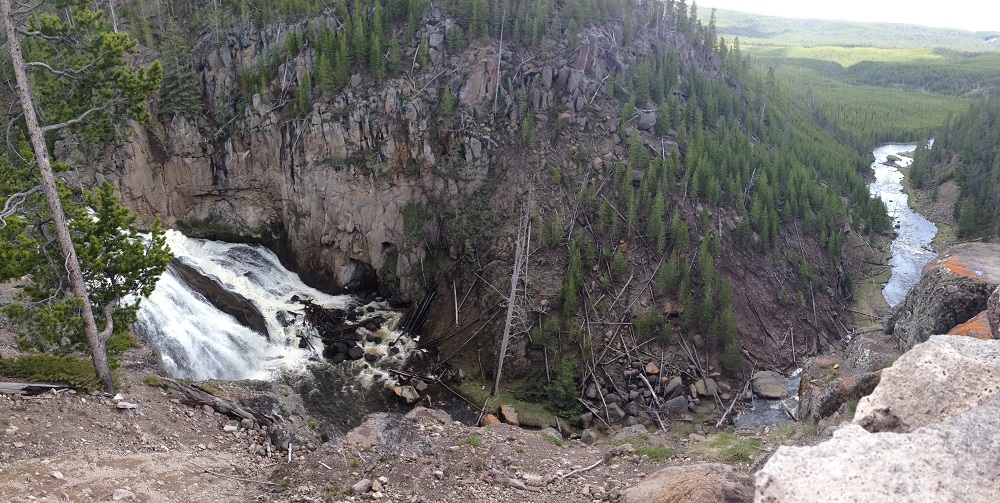 Turning south back toward Old Faithful, we took the Firehole Canyon Drive, a two mile, one way road that stretches through the canyon of the Firehole River near where it connects with the Madison River. It was a very pretty section, with Firehole Falls our favorite spot.

We stopped at Lower Geyser Basin to see the Fountain Paint Pot before continuing on our way to Midway Geyser Basin. This is the home to Grand Prismatic Spring. The rain and chilly temperature of the air prevented us from having the classic view of the spectacular colors from the spring, but we still found the area beautiful and vowed to return in warmer months. (The temperature difference between the spring and the air produces the steam – in the summer there is less of a temperature difference so less steam.) 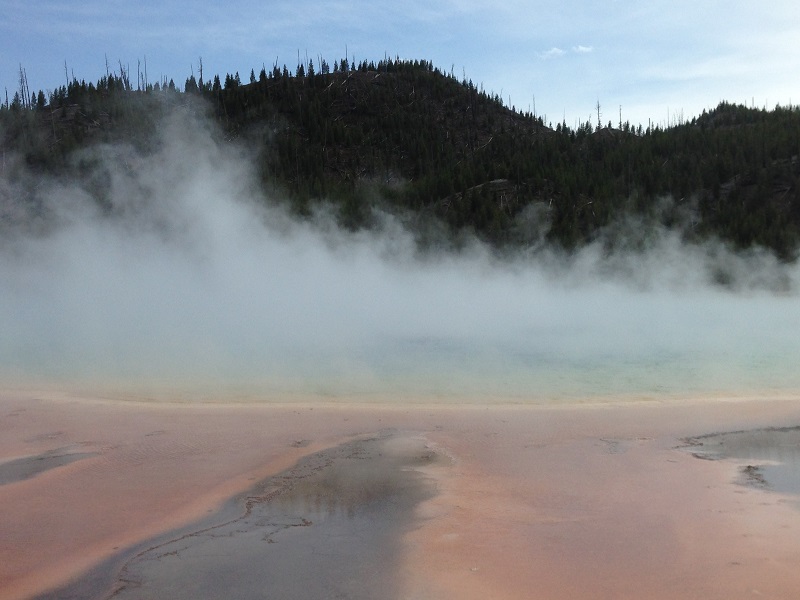 The next area for exploration was Biscuit Basin. The Sapphire Pool there used to have a biscuit-shaped mineral fromation around it, but the rocks were blown away after an intense earthquake in 1959. While we were here, Jewel Geyser erupted.

We spent the late afternoon and evening exploring along the lake from West Thumb to the Fishing Bridge. Yellowstone Lake is the largest body of water in the park and the largest freshwater lake above 7,000 ft in North America. The lake has been known to remain frozen until late May or early June, but it had completely thawed by the time we were there. The shoreline is beautiful and I would have loved to take a boat out onto the lake.

We walked around the beautiful hotel at Lake Village. There were no available dinner reservations for two hours, so we grabbed a bite to eat at the deli and enjoyed the view of Yellowstone Lake from Lake Hotel. Next on our list was the Fishing Bridge, which was a popular place for people to fish shoulder to shoulder until it was banned in 1973. The fish from the lake swim up the Yellowstone River there to spawn. It was getting dark, so we headed back to the campsite for our second to last evening in the park system.

We woke up the next morning to opening day for fishing in Yellowstone. After a little fishing of the Gibbon River near the Norris Campground and Madison River by the Madison Junction Campground, we moved up to the Firehole River where there were a lot of other fisherman. We didn’t manage to catch anything, but it was a beautiful morning and we saw some other people catch some trout and return them to the river.

Around lunch, we set off for the West Entrance of the Park to see Idaho. West Yellowstone, with a population of around 1,300 is located just outside the west entrance of the park on a small piece of Montana wedged between Wyoming and Idaho. Our plan was to buy some Idaho potatoes, but we didn’t see a store so we turned back to Montana and stopped at a grocery store in West Yellowstone to pick up food for my birthday dinner. We also got a pair of Blizzards at Dairy Queen for a birthday treat. We had cell reception here, so it was a nice place to check in with what was happening in the world.

We returned to the Firehole River for some more fishing before heading back to the campsite for dinner to cook the steak over the fire and celelbrate my birthday as well as our last night in the park. The next morning, we would sleep in, pack up our campsite and make the long trip through Yellowstone and Grand Teton to get back to Denver for our flight home the next day. It wasn’t the shortest route back, but it kept us in the park system the longest and gave us one more spectacular view of Grand Teton National Park.