We decided to spend the afternoon at Valley Forge National Historical Park today. Located only 25 miles from downtown Philadelphia, it is one of the nation’s most significant historical landmarks from the American Revolution.

Nearly 240 years ago, on December 19, 1777, Washington’s army marched into Valley Forge where they would stay for the next six months. They had been defeated at Germantown and Whitemarsh as they ceded Philadelphia to the British. Although there would be no battle at Valley Forge during their six months there, they lost around 2,000 soldiers to disease, from the approximately 12,000 that started the winter. A number also deserted, while others’ enlistment ended and they returned home. 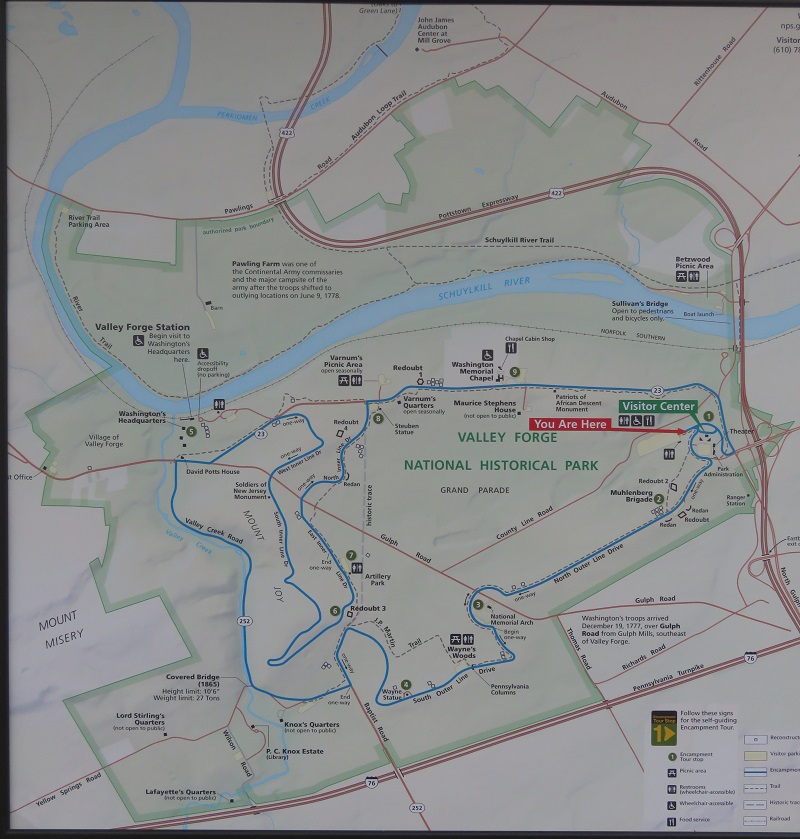 The winter at Valley Forge is often referred to as a turning point in the Revolutionary War. In the first battle after Valley Forge, the Continental Army demonstrated vast improvement as it fought the British to a standstill at Monmouth, New Jersey and the British withdrew from the field after dark. While at Valley Forge, France also entered the war as an ally of the United States against the British.

Valley Forge is not one of the 59 national parks. Instead, it is listed as one of the 40+ national historical parks in the country. The designation is shared with Abraham Lincoln’s birthplace, Appomattox Court House, Harpers Ferry, the Klondike Gold Rush, Nez Perce and many other sites of historical significance.

Valley Forge was originally Pennsylvania’s first state park, created in 1893. The area was transferred to the National Park Service on July 4, 1976, the Bicentennial of the United States.

It was a beautiful day for our visit with a high of around 51 degrees and the park contains 28 miles of authorized trails for hiking, biking and horseback riding, so it was probably a bit busier than the ordinary winter day. However, it was clearly not as busy as the park gets at its peak, since the park ranger at Washington’s Headquarters told us that more than 1,000 people will go through there on a busy day. 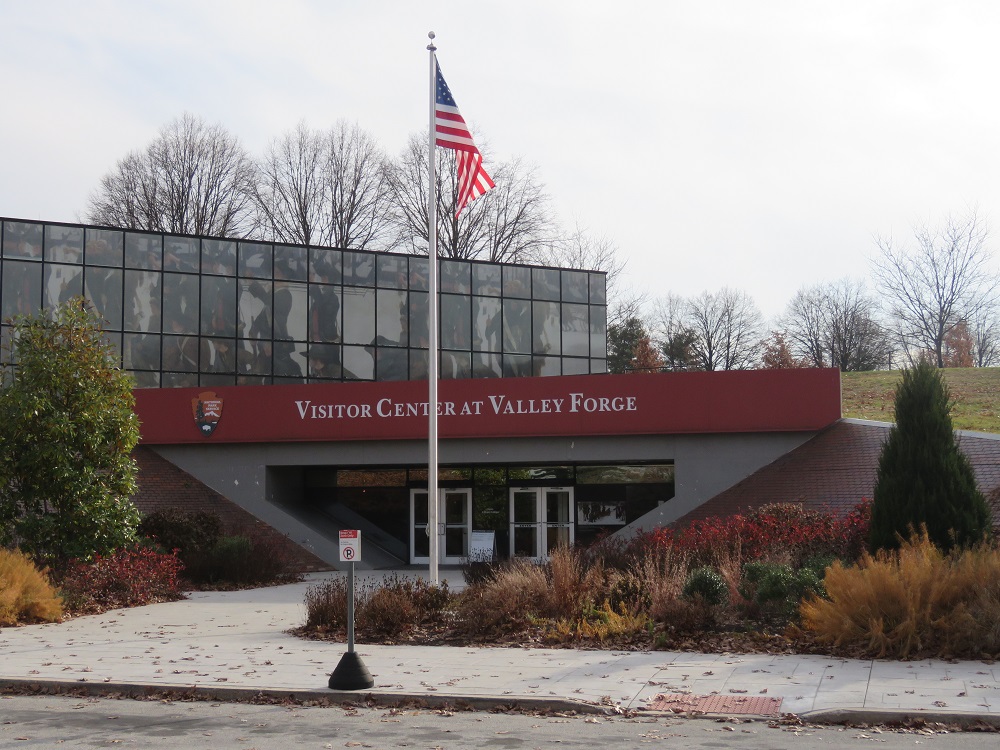 We made our way to the visitor center at first to orient ourselves to the park and pick up a map. We also found out there is a cell phone audio tour with details about a handful of important locations around the park, so we didn’t buy a recorded audio tour like we did at Gettysburg.

While at the visitor center, they announced that the next video about the park would be starting in the theater, so we made our way up the stairs and over to the next building. It was about a fifteen minute video and gave us a great overview of the park and the events of that winter. 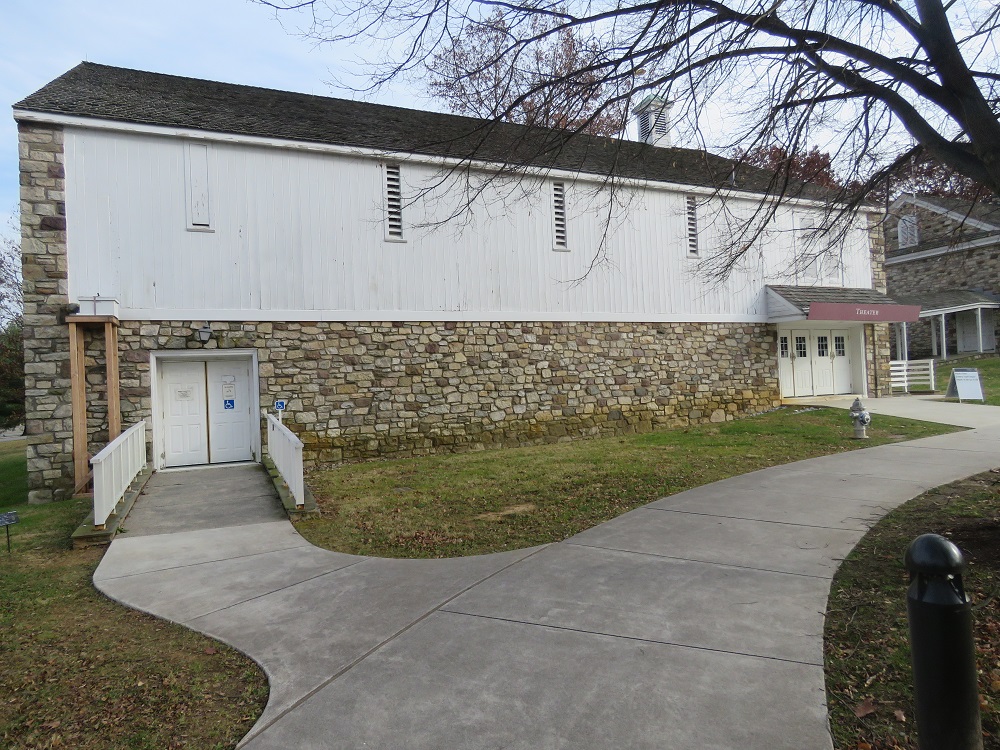 Much of the park is accessed by a one-way road, so with our map in hand we made our way to the second stop (the visitor center is the first stop on the audio tour), which isn’t too far away. Here, we found a redoubt and replicas of the soldiers’ quarters. Although we saw the soldiers’ quarters a few years ago, they had made substantial improvements to them as an educational learning tool. There was even a park employee in one of them with a fire going and dressed in a soldier’s uniform to answer questions. 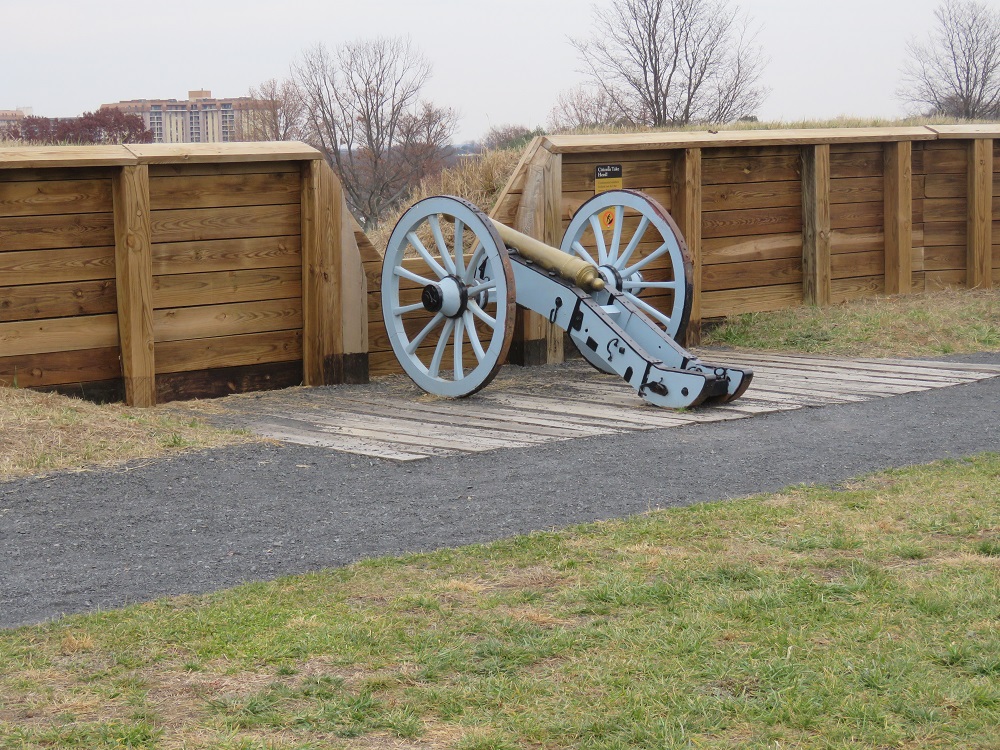 Above is a cannon that was located in one of the redoubts near the soldiers’ cabins not far from the visitor center. 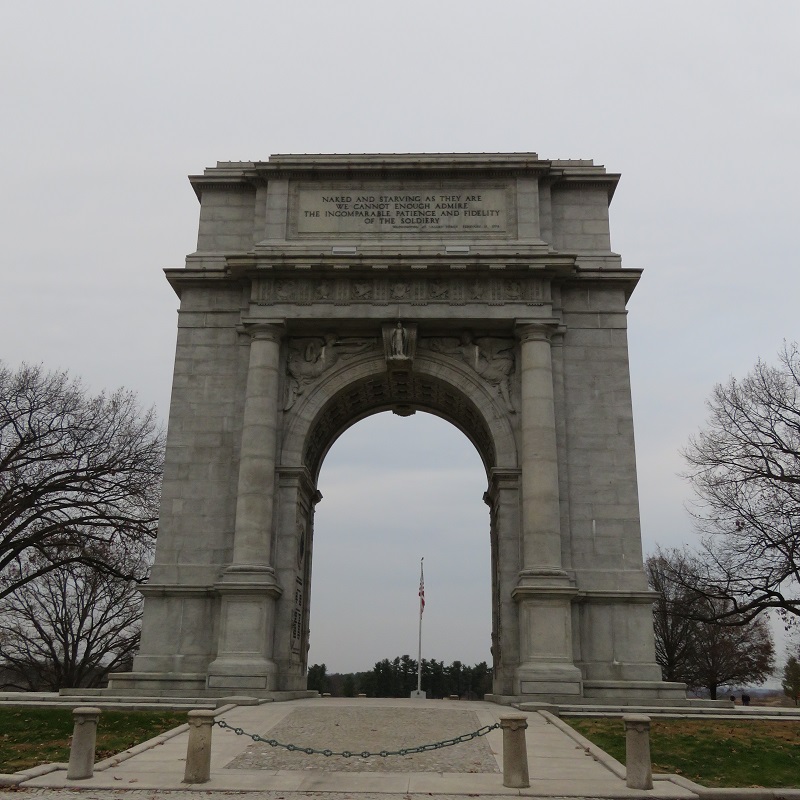 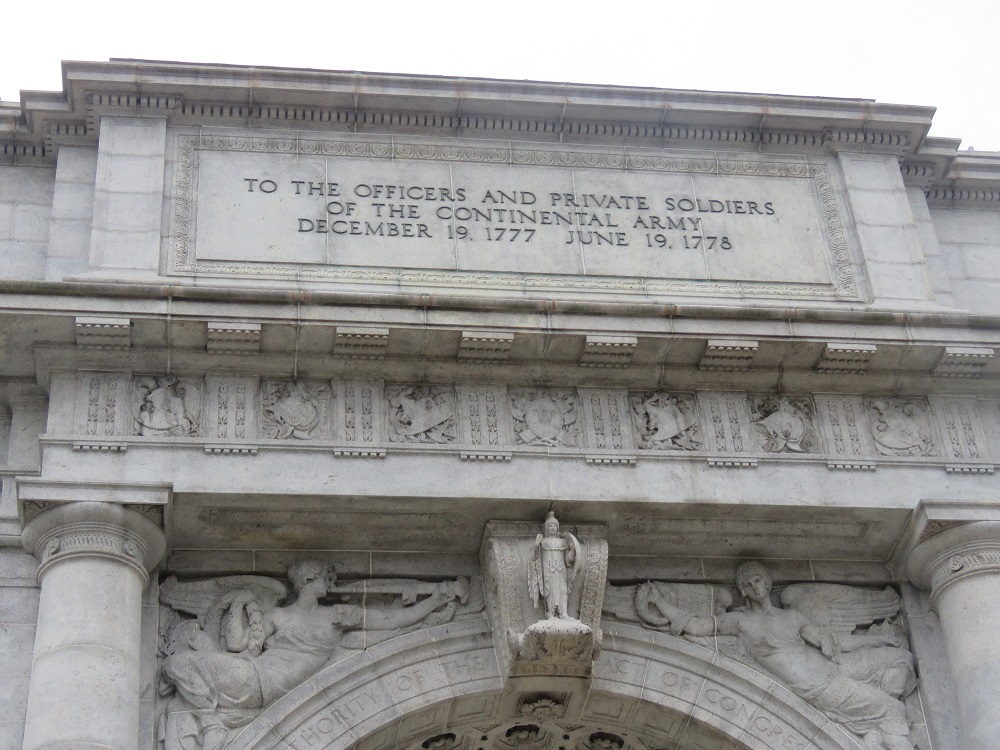 We made our way next to the National Memorial Arch. This sixty foot high arch was created by Congress and dedicated in 1917. It was designed by Paul Phillipe Cret and is modeled after the victory arches of Ancient Rome. Cret is also known for designing the Benjamin Franklin Bridge. 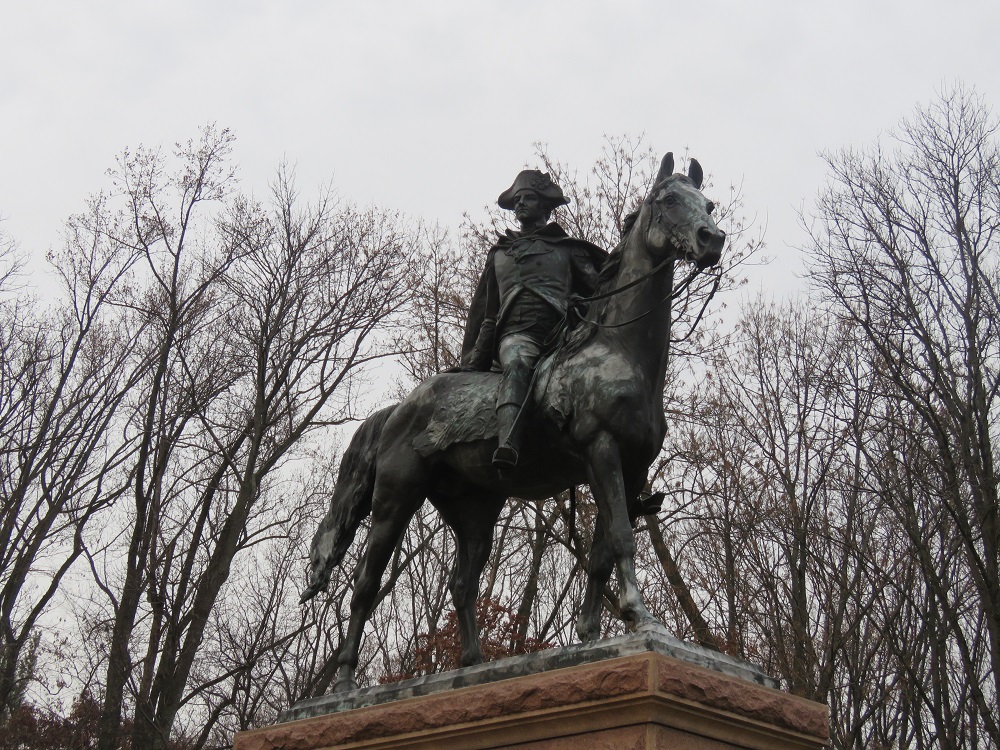 We stopped briefly near Wayne’s Woods. Anthony Wayne was a prominent Chester County resident in the Pennsylvania legislature who raised a militia unit to fight with the Continental Army. The sun was setting over the field and it was beautiful. 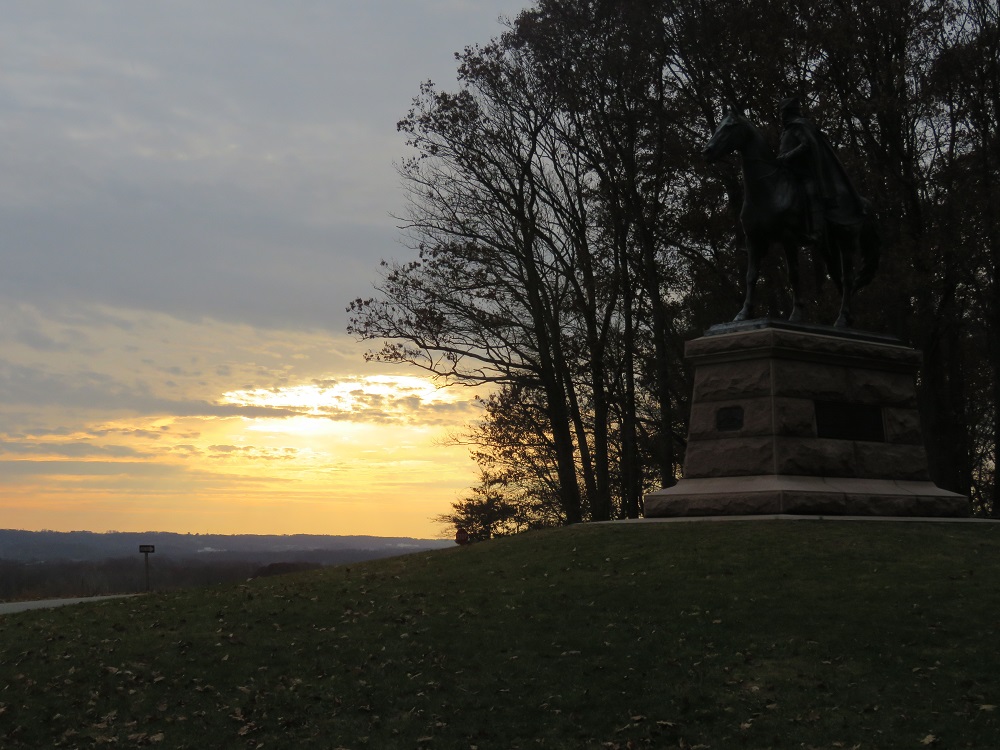 Our next stop was Valley Forge Station and Washington’s Headquarters. We parked, made our way around the small circle of historical buildings in the lower section and then got back in the car as the sun was setting. (The park closes each day at dusk.) 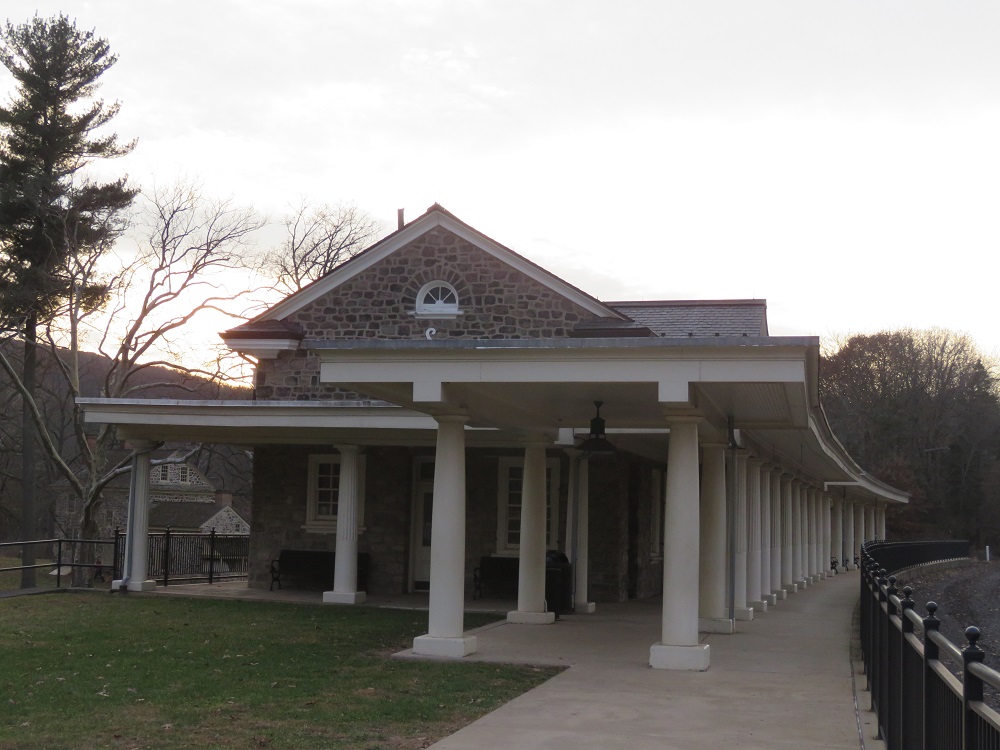 The train station was created by Reading Railroad in 1911 to provide a point of entry for visitors to the park from Philadelphia. The building which served visitors through the 1950s was restored in 2009 and is now an information center about the area and Washington’s headquarters. 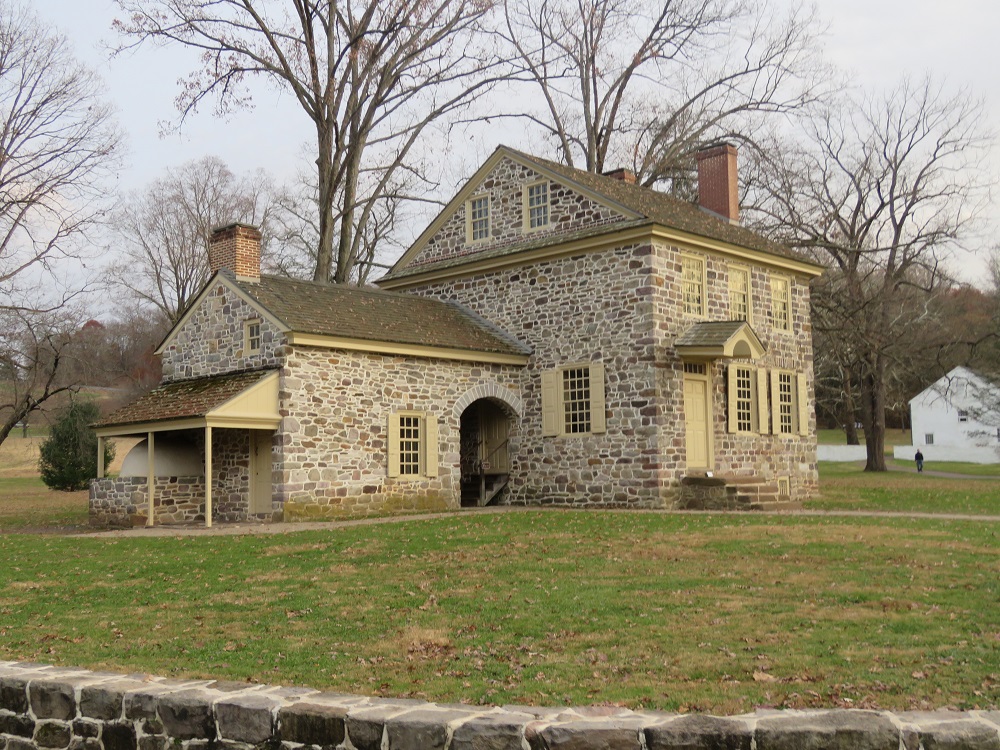 Washington’s headquarters was a rented home where up to 25 people were living during the army’s encampment in Valley Forge. Washington and his aides worked in the two first floor offices and his guards lived in a nearby set of log cabins. The home was purchased in 1877 by the Valley Forge Centennial Memorial Association. 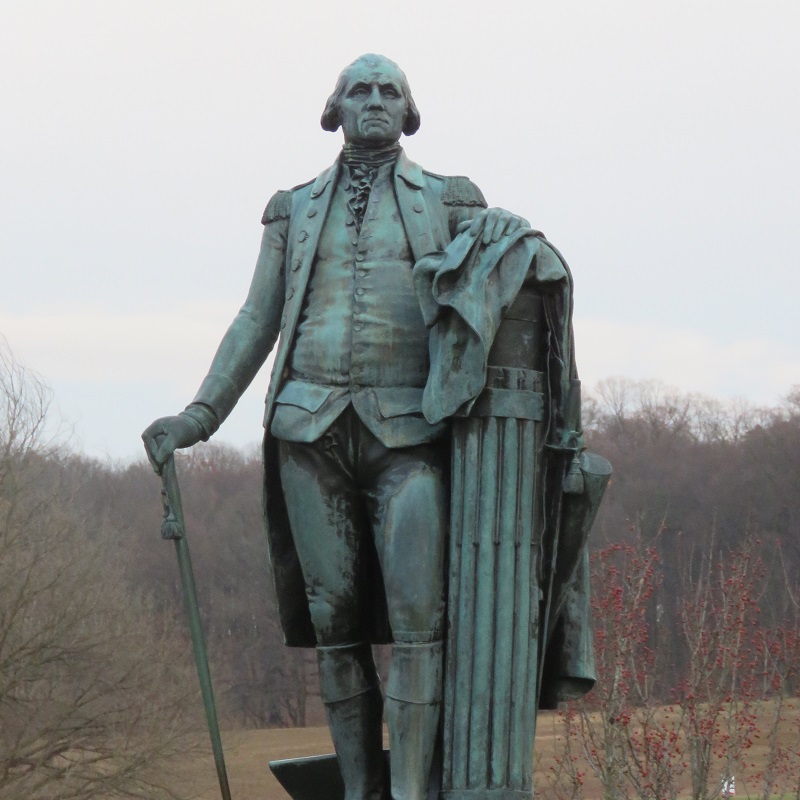 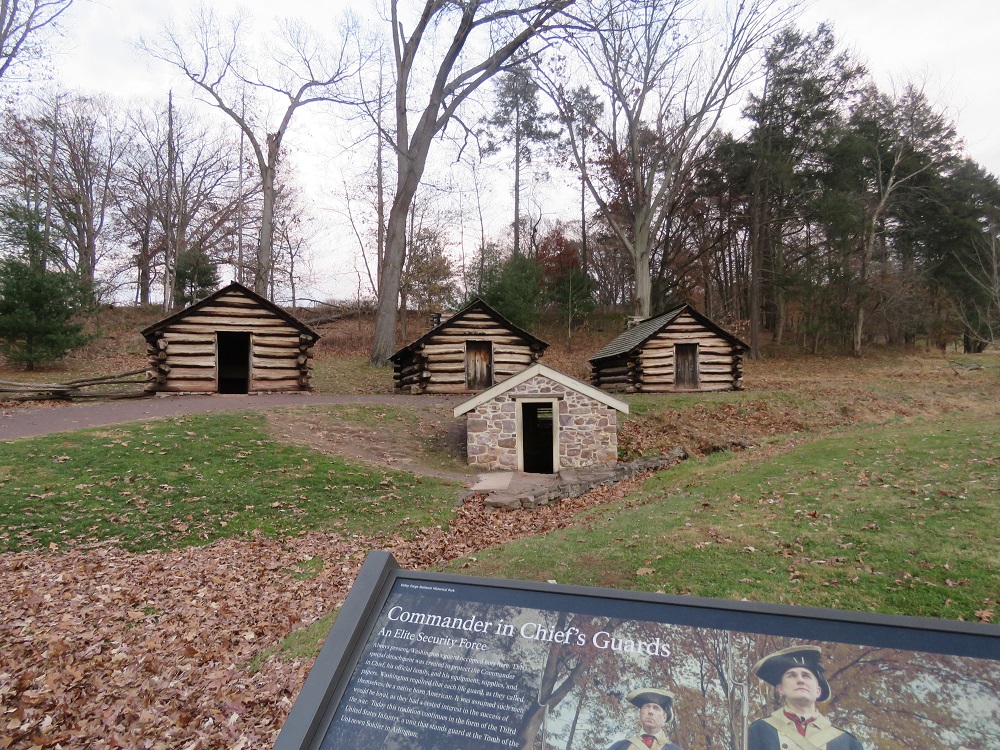 Valley Forge is a must see location for any Philadelphia visit to see Independence Hall and the Liberty Bell. Given its proximity to our home, we’ll definitely be back again in the future!