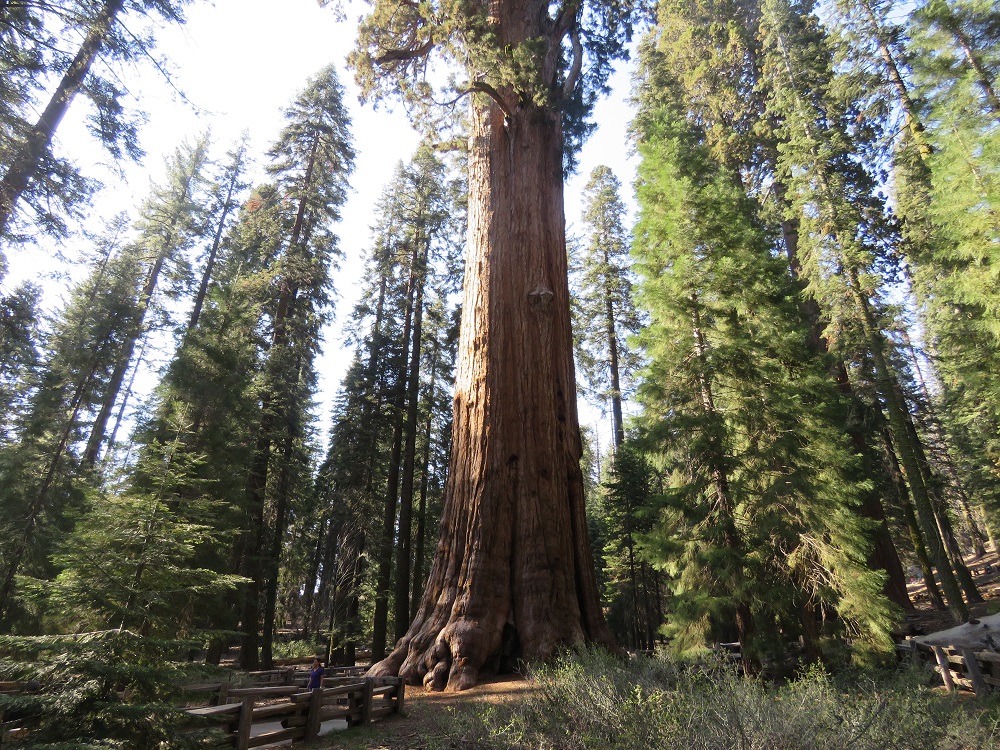 We spent a day in Kings Canyon and Sequoia National Park after our stay at Yosemite National Park. We took the tour at the General Grant tree, drove through Kings Canyon to the end of the road at Copper Creek Trailhead, explored the area around the General Sherman Tree, drove under Tunnel Log, climbed Moro Rock, and had breakfast at the Grant Grove Restaurant.

It was a pretty long day. We woke up early in Fresno with a big day ahead of us. We had a reservation the prior night at the Hume Lake Campground but our hike in Hetch Hetchy meant that we did not get down to Fresno until the sun was setting. We decided that it was better to drive into the area during the light since we did not really know where we were going and there were a lot of twists and turns on the map which usually signals an elevation change. So as we were watching the sun set in Fresno we decided to abandon that plan and stay a night near the Fresno airport. After the free breakfast in the morning we were ready to go!

Fresno is a little over an hour from Grant Grove Village and the Kings Canyon Visitor Center, our first stop in the park. After a bit of souvenir shopping, we hit the road again but quickly got detoured by the sign for the General Grant Tree. 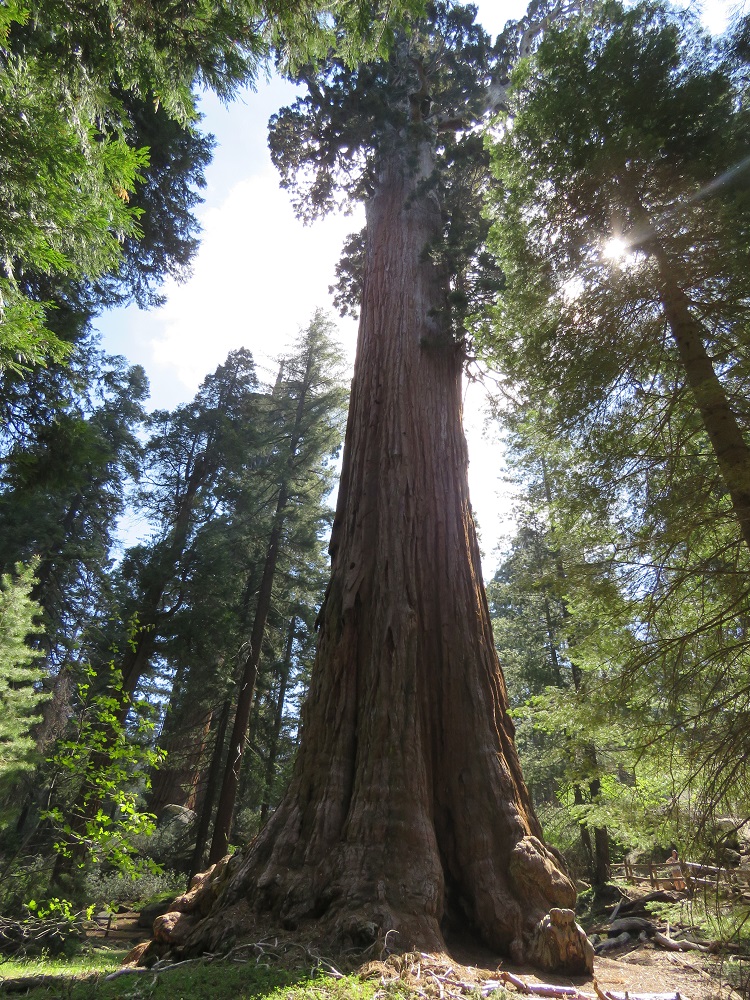 The General Grant tree is the second largest tree in the world and is estimated to be about 1650 years old. It is reached by a 1/3 mile paved loop from a parking area. We got there just as a free park ranger tour was starting, so we tagged along.

We heard a number of interesting stories along the way, including the story of the “California Hoax” during the Philadelphia Centennial Exhibition of 1876 – where a sixteen foot section of a sequoia tree from the General Grant Grove was cut down and the people did not believe the outer shell reassembled for the exhibit was from a single tree. We also learned about the massive root systems of the sequoia trees, and the importance of fires in their development.

The General Grant was the number three tree in volume in the world until the Washington tree in the Giant Forest Grove in Sequoia National Park partially collapsed after a heavy snow in 2005. The General Grant is also the widest tree known in the world with a 40 foot diameter at the base.

If you listen carefully while you are there, you will probably hear the woodpeckers striking a tree. We were fortunate to see a pileated woodpecker striking one of the trees while on the tour. It was not our first sighting though – we saw a few earlier in the year when we were down in Congaree National Park in South Carolina.

We checked in at the Hume Lake campground and then continued on our journey. We stayed at the campground because there were not any available reservations at either Sequoia or Kings Canyon for the night (it was still early in the season) and we wanted to make sure that we had a place to stay. The hosts were friendly and it worked out well.

We continued past the campground and set off to descend into Kings Canyon on the Kings Canyon Scenic Byway for the rest of the morning. 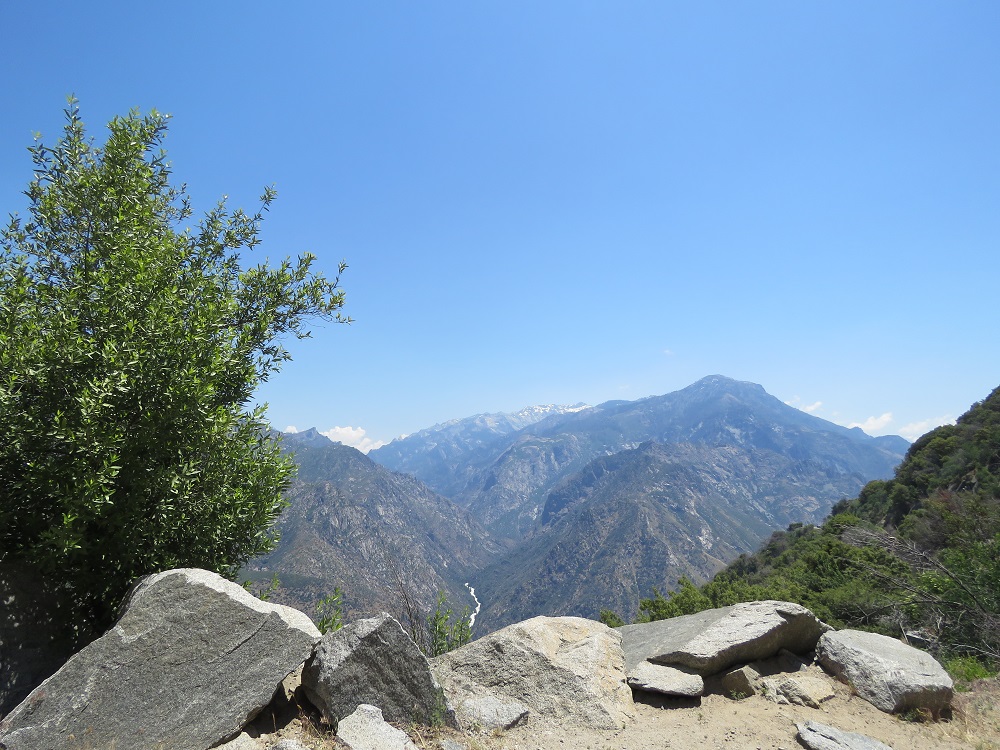 Kings Canyon is one of the deepest river gorges in North America. At more than 8,000 feet deep in some spots, it is actually deeper than the Grand Canyon. You can see the road widing its way down in the next shot: 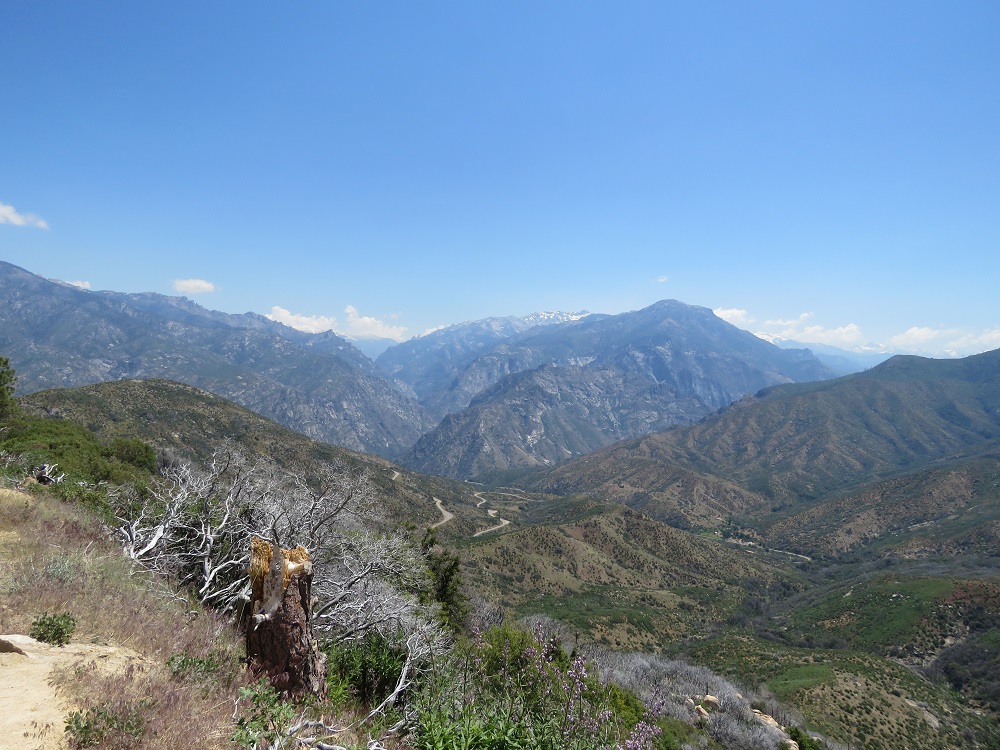 The Kings River was running fast through the gorge from all of the melting snow runoff, making for some beautiful scenery. 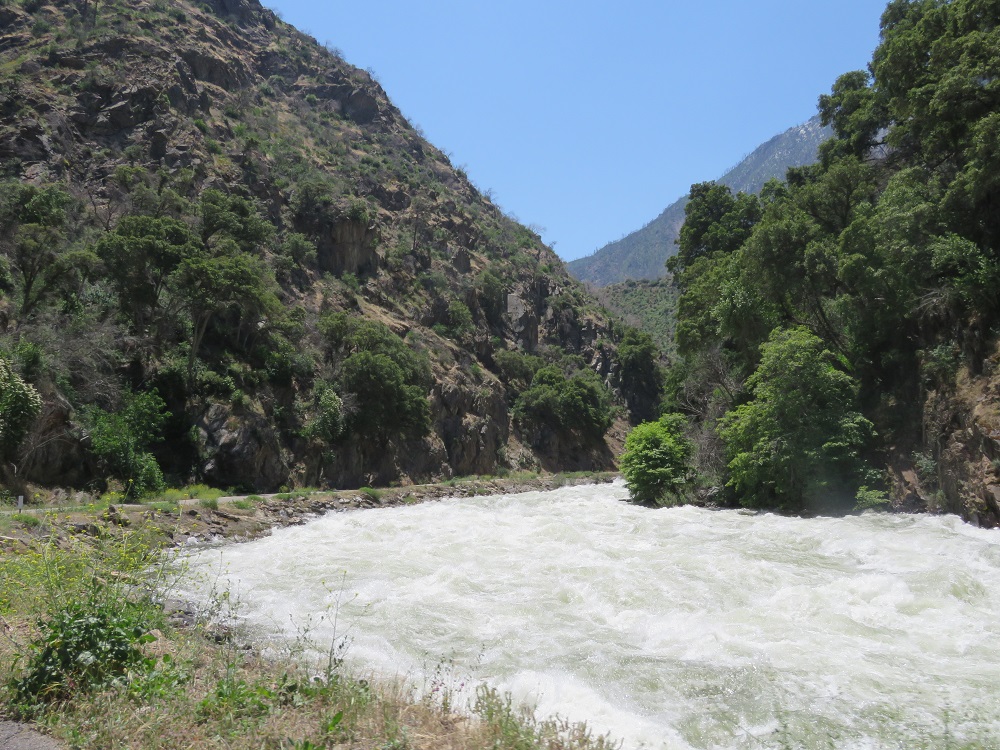 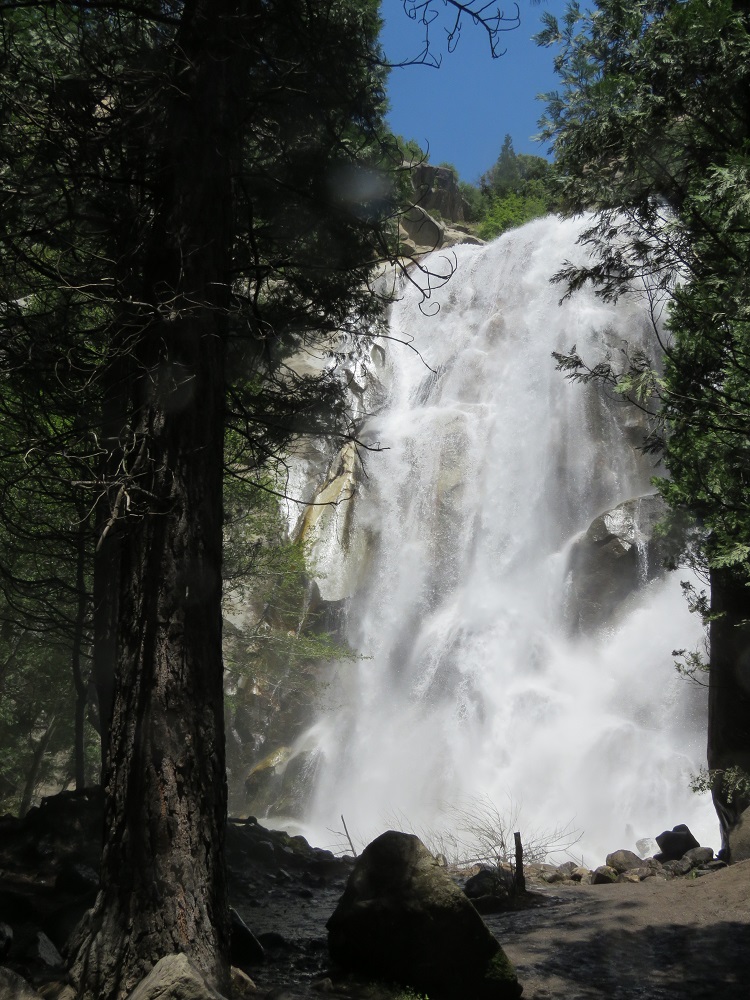 We made our way down past Grizzly Falls to Cedar Grove. Cedar Grove is the location of Cedar Grove Lodge (we grabbed lunch at the market there and ate on their balcony), four campgrounds and the Cedar Grove Visitor Center. After lunch, we worked our way down to the road’s end, and then did a short walk around Zumwalt Meadow before heading out of Kings Canyon and over to Sequoia National Park. 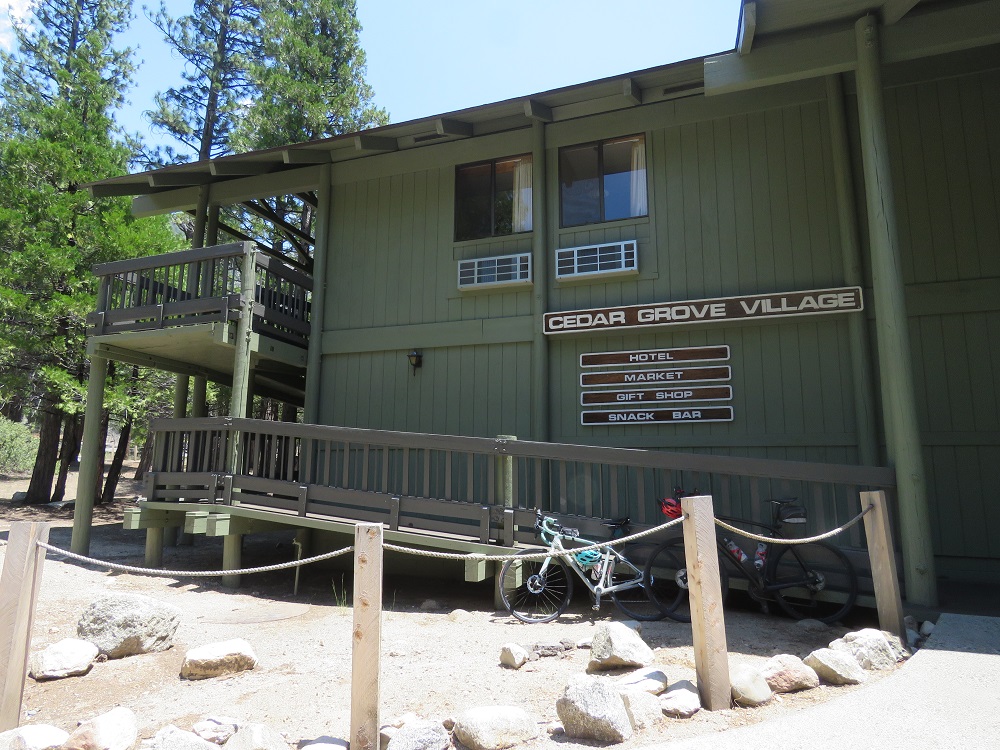 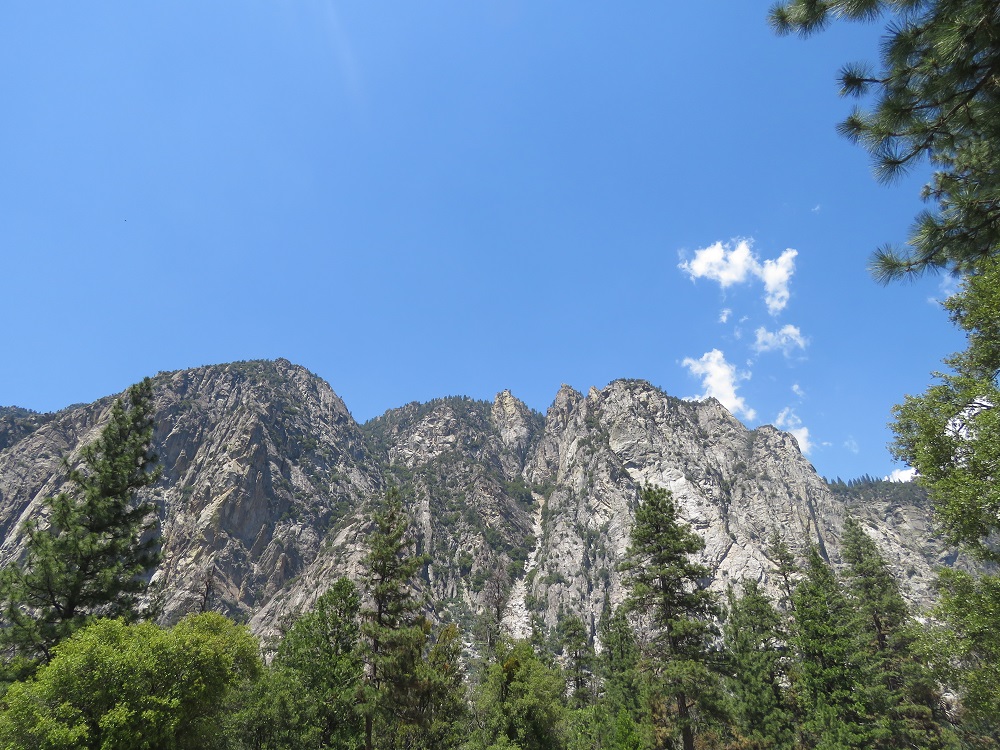 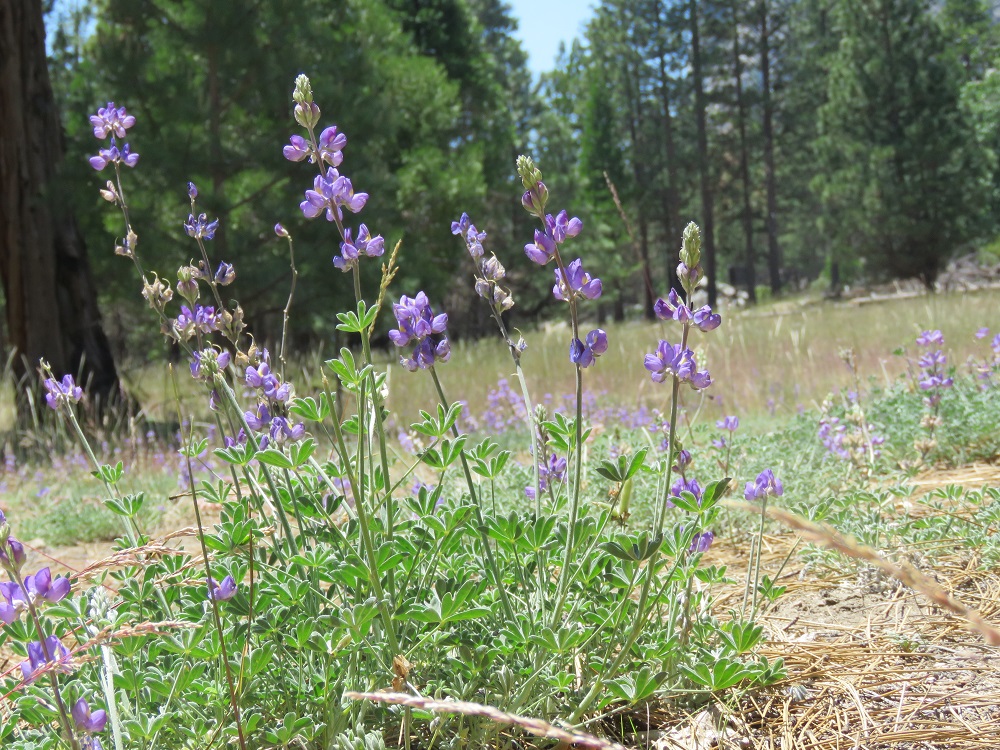 We retraced our steps to make our way to the Generals Highway – headed for the Lodgepole Visitor Center, General Sherman Tree, Auto Log, Tunnel Log, and Moro Rock. 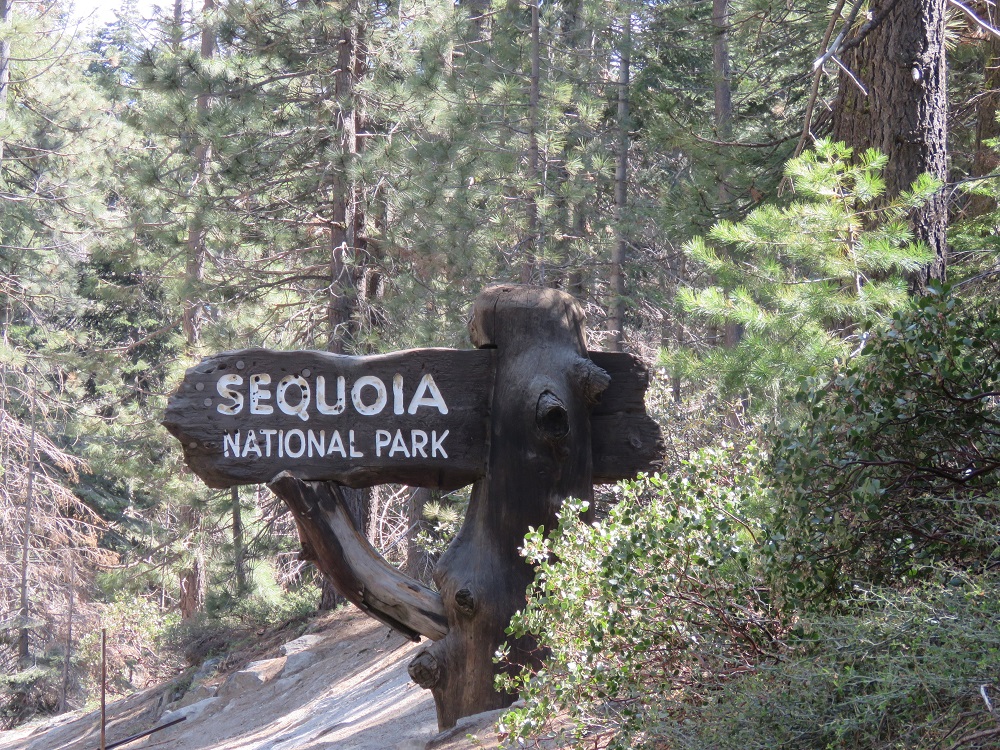 We stopped to explore the Lodgepole Visitor Center and grab a quick lunch at the Market Center, before continuing on to General Sherman. 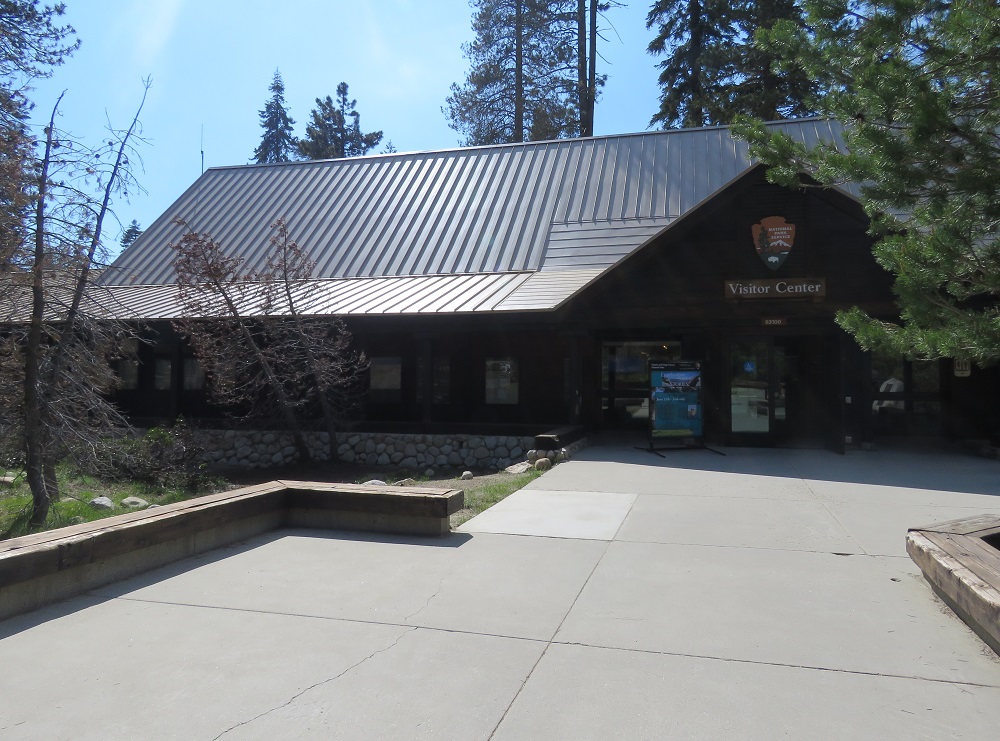 After admiring other large trees this year (first at Congaree, then Muir Woods and Kings Canyon), it was really surprising how much fun we had walking through this grove. The General Sherman Tree is incredible and a must-visit for any adventurer through the national parks. Walking among what many consider to be the largest living organisms on earth is simply amazing.

There is no way to adequately describe the size of General Sherman – you simply have to see it for yourself.

After retracing our steps to the parking lot, we headed down the road toward Moro Rock, admiring the many other large sequoias alongside the drive. Our next stop was at Auto Log, where visitors once drove their vehicles onto the fallen sequoia. This is no longer possible, but we did enjoy taking a picture of the historic site. 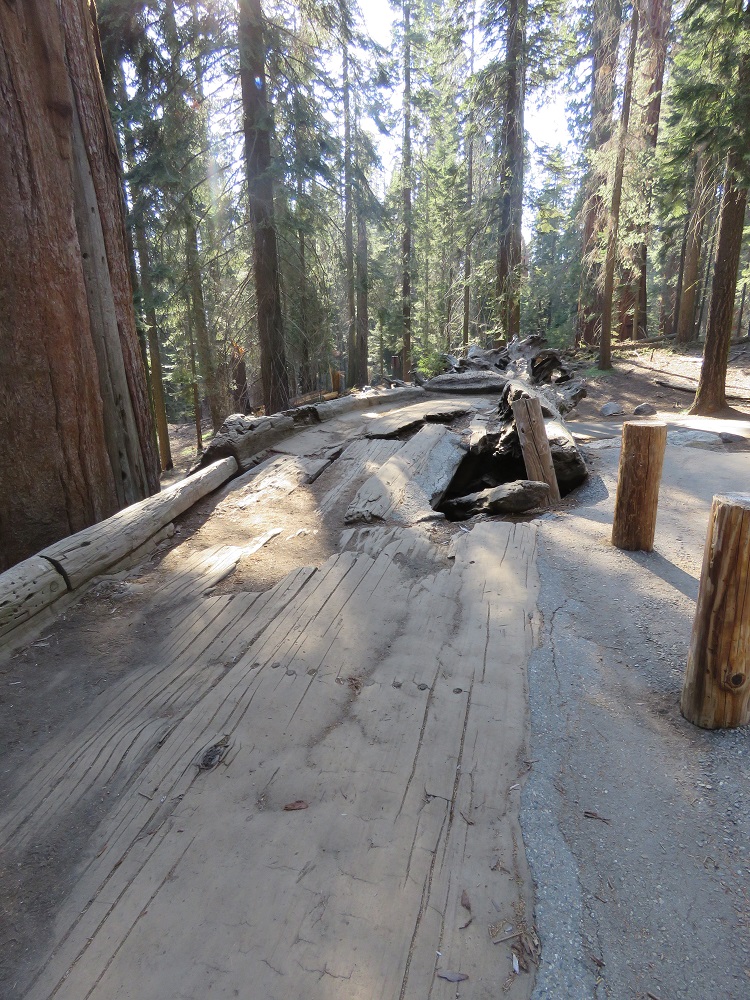 We then drove under Tunnel Log. If you are looking for a great picture spot during a road trip for your family and car, this is one of THE places to go. A “tunnel” has been carved through the fallen giant sequoia so that you can drive your car through/under it. 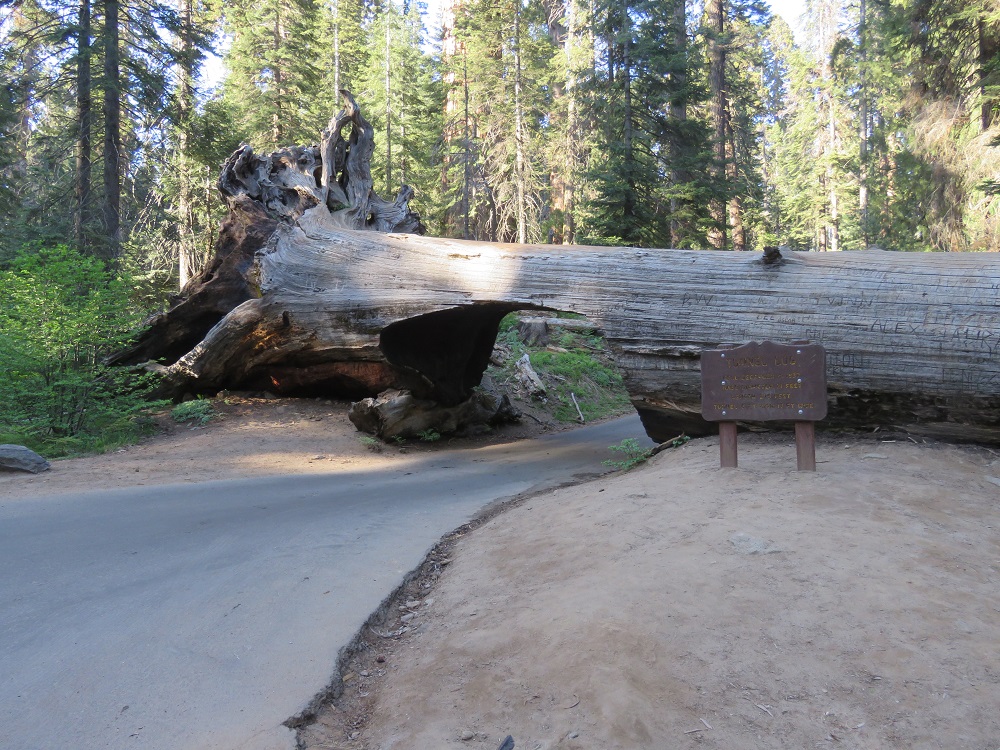 Climbing Moro Rock was a bit crazy. This is one of the most popular hikes in Sequoia National Park, and it should come as no surprise since the view after the 350+ steps in the quarter mile climb was totally worth it. Moro Rock rises 6275 above sea level but the hike only has an elevation change of 300 feet from the parking lot. However, if you are afraid of heights or have small children, there are a few places where you may be concerned, as there are not guardrails against the drop off in a few areas.

The viewing platform of Moro Rock provides roughly 360 degree views of the surrounding area including the Great Western Divide, a subrange of the Sierra Nevada mountain range 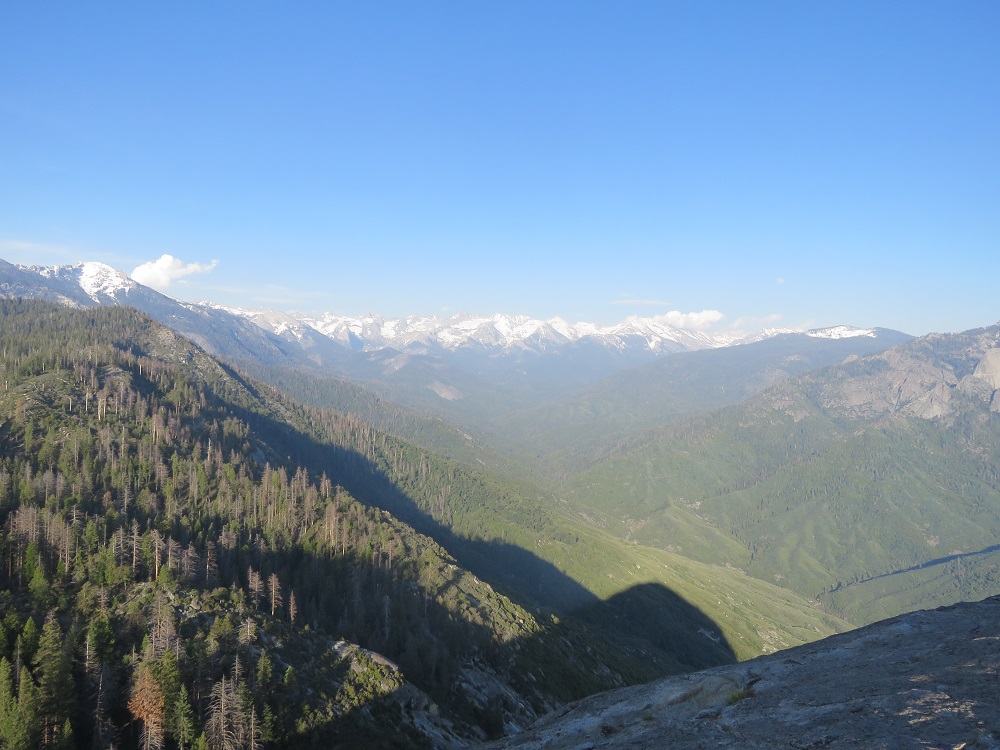 One thing to know about Moro Rock is that you should be prepared to find photographers situated at the end of the platform in anticipation of sunrise or sunset. We were there as the sun was waning and the photographers already had their cameras setup on tripods for the sunset.

Since we had at least an hour to get back to the campsite, we did not stay around for the sunset. We arrived back at our campsite just after dark, and quickly setup the tent and searched for the restrooms.

We took a moment in the morning to walk down to Hume Lake, enjoy the quiet, and watch a duck cross the lake. 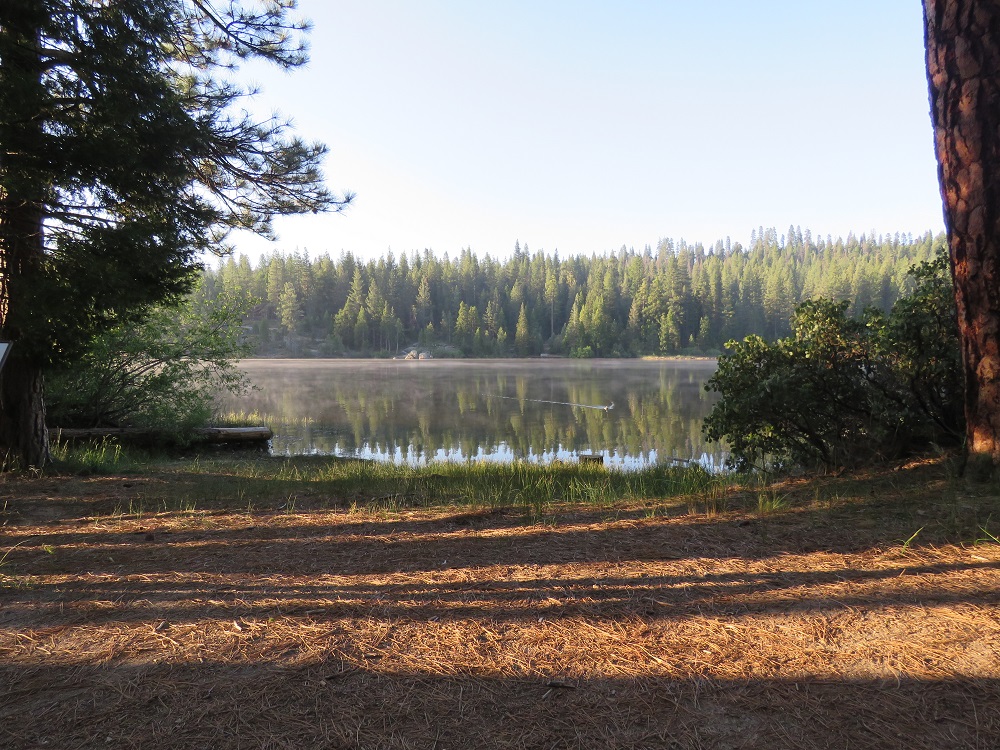 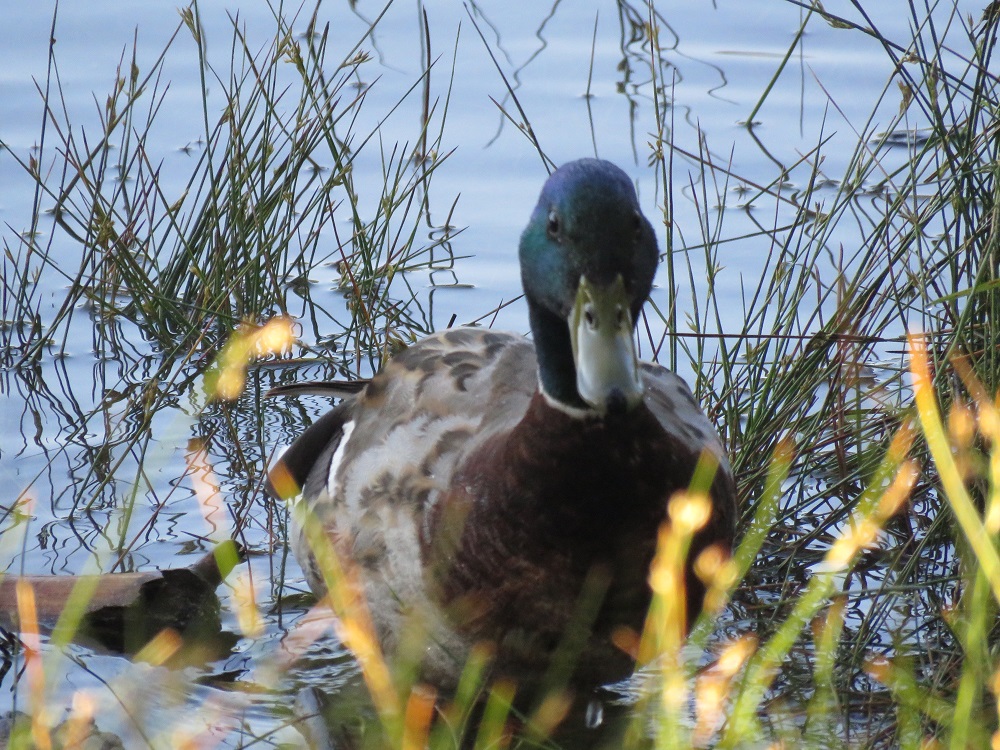 Then we packed up our campsite and headed to breakfast at the Grant Grove Restaurant. We chose the buffet and filled up before setting out across the state to Pinnacles National Park. Check our next blog post for more information on that part of the adventure!