Rocky Mountain National Park is a gem with breathtaking views, abundant wildlife and outdoor recreation opportunities such as hiking, fishing and camping. Located just past Estes Park in the Greater Denver area, it is the perfect place for a long weekend jaunt or a destination for an even longer vacation.

We were fortunate to spend a few days there in May 2016. We were in the Denver area for a wedding and decided to make an extended vacation of it to see Yellowstone National Park. Poor weather caused us to delay our trip to Northern Wyoming by a few days, and RMNP proved the perfect pre-Yellowstone stopover.

We arrived in the evening with an hour or so to explore before darkness set in. The first thing that we ran into was a massive herd of elk. As I grew up in Michigan, I have seen deer before. But this herd takes it to the next level. We forgot to get the digital camera out but we did capture a few photos of the herd on our phones. The open meadow around Moraine Park is one of the best places to see elk. 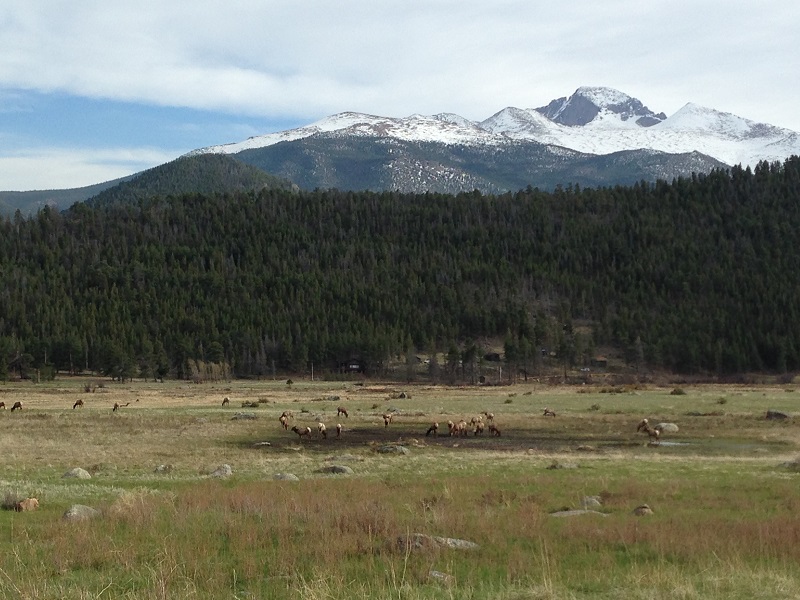 We ended up driving as far up as we could so early in the season. It was amazing that it was probably 60+ degrees that day in Estes Park but there was several feet of snow in certain places on the side of the road. We made it to an elevation of about 10,000 ft. or so before the road was closed by a wall of five or six feet of snow. It was still too early in the season for them to plow past that point.

It was still the offseason, so we couldn’t make online reservations for camping. Instead, the campground was first come first served. We decided to chance it, knowing that there was space available at the KOA in Estes Park on Saturday night. When we saw the sign at the campground that said it was full, we went and had a lovely night at the KOA. As we found out the next day, the campground wasn’t actually full. The sign outside the Moraine Park campground (as well as another one on the way to Moraine Park) were just wrong and hadn’t been changed in the offseason. We stayed the next night at the Moraine Park campground, our first in a national park, and thoroughly enjoyed the picturesque view of the open air auditorium in the campground. 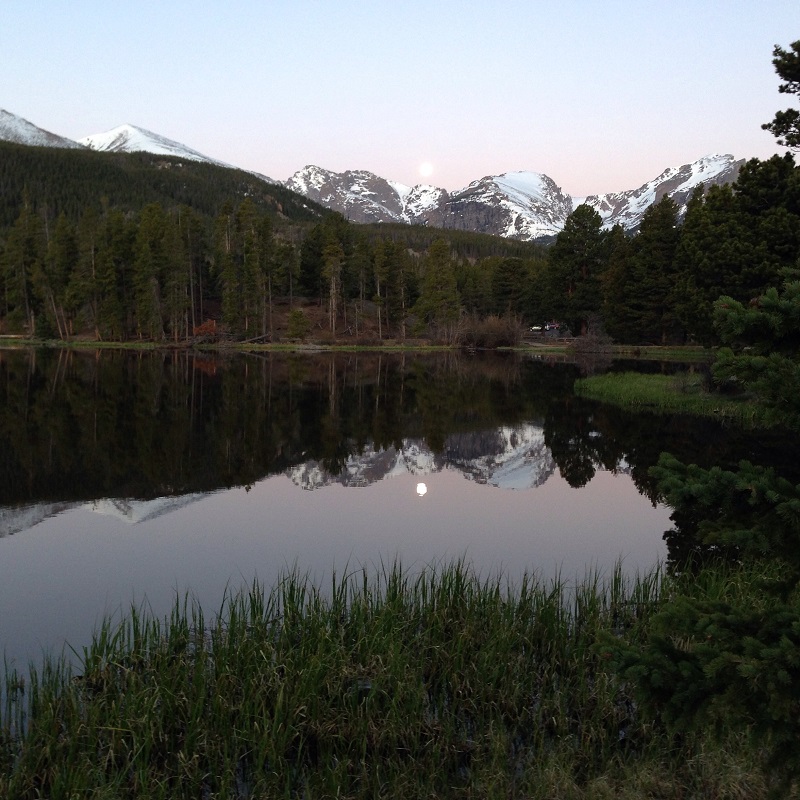 On Sunday morning (while at the KOA), we woke up at an insanely early hour to watch the sunrise at Sprague Lake. It was my idea, of course, and we would highly recommend doing it at least one time when you are at Rocky Mountain. Sprague Lake is a small 13 acre lake circled by a .8 mile loop trail (although it is sometimes marked as a half mile loop). On a calm day, it provides a beautiful backdrop for photographing the sunrise, with the mountains reflected on the lake. 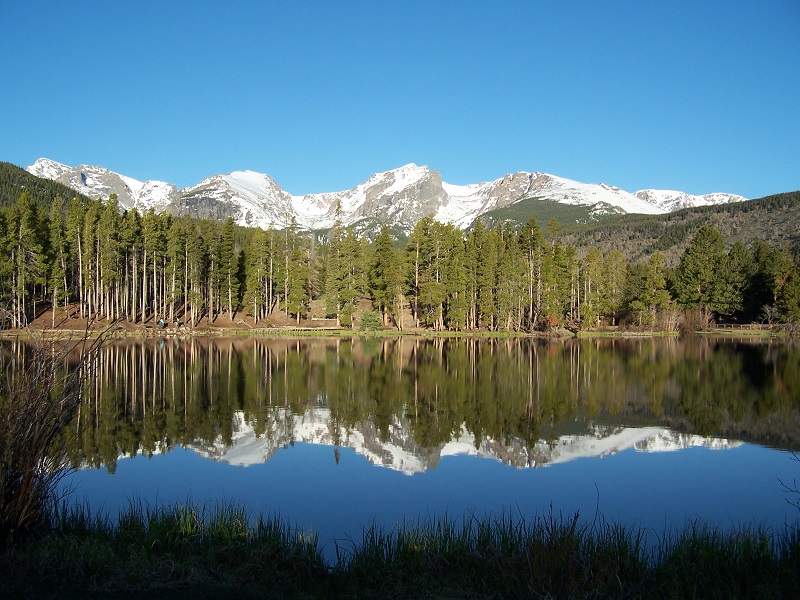 After we packed up at KOA and moved over to Moraine Park for Sunday night, and stowed our cooler in the bear locker, we decided to hike the Fern Lake Trail from the trailhead in the afternoon. We ended up turning back just after Fern Falls as the elevation got steeper and we didn’t have the appropriate footwear to be hiking the incline in the snow. We heard along the trail that Fern Lake was still predominately ice covered at that point in mid-May (the weekend before Memorial Day weekend). It was my first time hiking in the Rockies and I will definitely remember to take into account the snow at higher elevations before starting out next time. 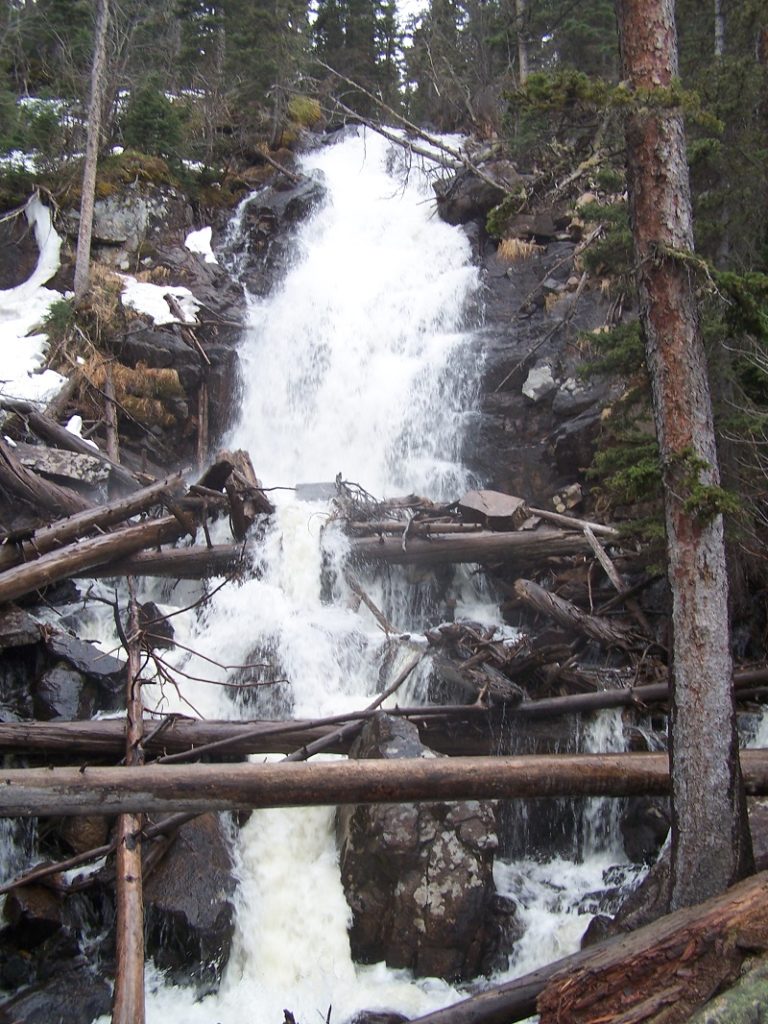 (Fern Falls in May)

We concluded the evening with a little fishing on the Big Thompson River and at Sprague Lake, but we were unsuccessful. There were lots of other fly fisherman walking around in their waders that afternoon.

After spending our first night in a national park, we packed up on Monday morning and headed off to Grand Tetons for the next stage of this adventure!

(This post has been backdated to show up appropriately on the timeline of the blog.)