Shenandoah National Park in Virginia is known for spectacular views from Skyline Drive, abundant wildlife, and magnificent hiking on the Appalachian Trail. Only 75 miles from Washington DC, it is a must visit for nature lovers on the East Coast.

We spent a weekend in mid-November 2016 at Shenandoah National Park to catch the last glimpses of the late fall foliage this year. It turns out that Front Royal (the gateway to Shenandoah) is only a couple hours from Philadelphia, so we threw our camping gear in the car and headed down Friday after work to do what we though would be our last national park trip for the year. (We ended up sneaking in a pre-Christmas trip to Cuyahoga Valley in Ohio.)

We arrived in Front Royal after dark and set our alarm for an early morning to catch the sunrise. We had done this successfully in Rocky Mountain National Park and got some incredible photos, but we slept in a bit too long to catch the first rays of the sun peaking over the lowest rolling hills to the east of Skyline Drive inside the park. We did much better on Day #2. 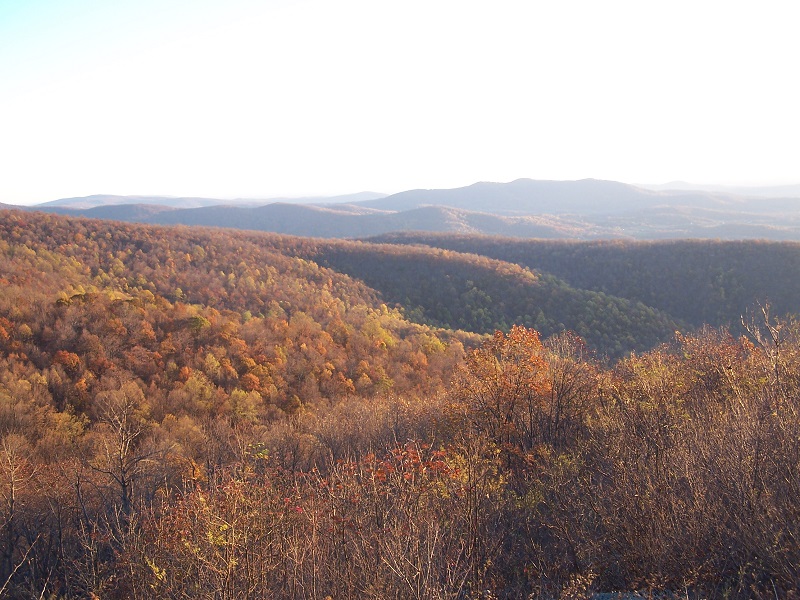 The drive south in the morning light on Skyline Drive from Front Royal presented spectacular views at every turn. The color was definitely past its brilliant peak but still possessed plenty of the soft autumnal tones that remind gazers that the hills and mountains haven’t succumbed to winter just yet. We were enthralled watching the sun rise in the east and later watching the shadows shrink on the valley to the west as the sun rose slowly high enough to eliminate them for the day. 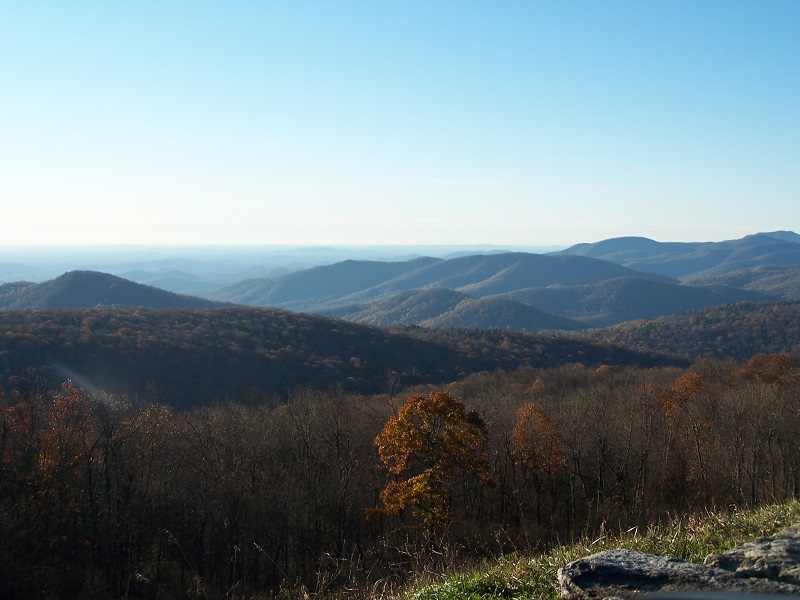 Skyline Drive is the 105 mile road that runs the length of the national park. On a normal day, it is one of the country’s most scenic drives. In the fall, it is truly amazing and full of leaf peepers (people looking for fall foliage if you aren’t familiar with the term). We were pretty late in the season, but there was still a rush for open campground spots around mid-day Saturday as people took advantage of the beautiful weather of the weekend. It was the last weekend of 24/7 access to the park, with closures of the road starting in the evening to make the detection of illegal hunters easier.

We stopped to recharge with some coffee at Skyland in the morning before making our way to the Big Meadows campground. It was the last weekend of camping in the park and the spots were first come first serve at the time. We ended up getting a great spot right off the AT (Appalachian Trail).

After lunch, we continued our journey to the south, hoping to make it all the way to Rockfish Gap. We thought that we would pretty easily be able to drive the length of the park before sunset when we set out in the morning. As it turned out, we simply made too many stops to complete the 105 mile road before the sunset in the evening. The sunset completely around Moormans River Overlook (mile 92-ish) and we turned back to the campground. 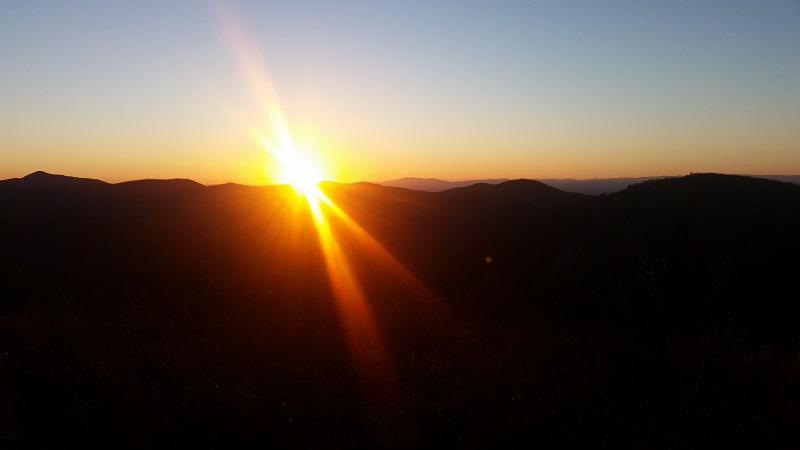 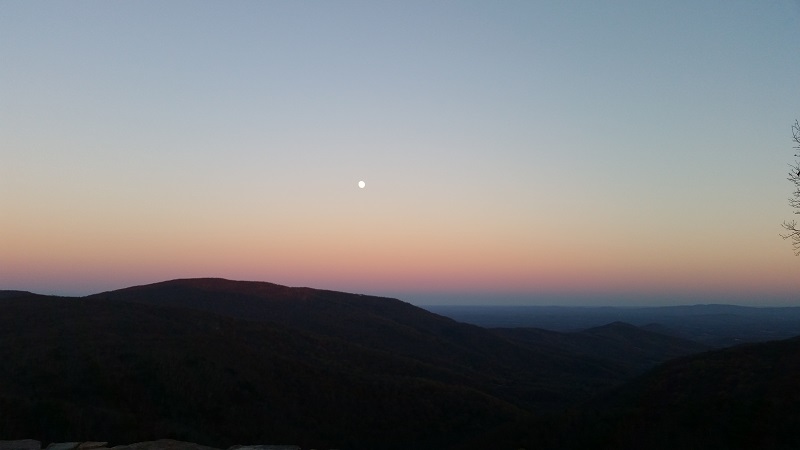 We got an even earlier start Sunday morning, and actually caught the first rays of sun peaking over the hills while we were in our tent. We raced (at an entirely appropriate speed for the winding roads) north past Skyland to get back to Thorofare Mtn and Hemlock Springs to capture the event on camera. 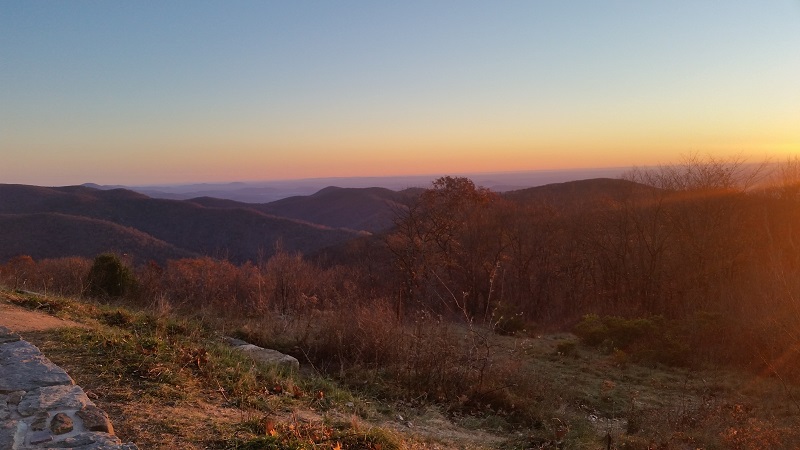 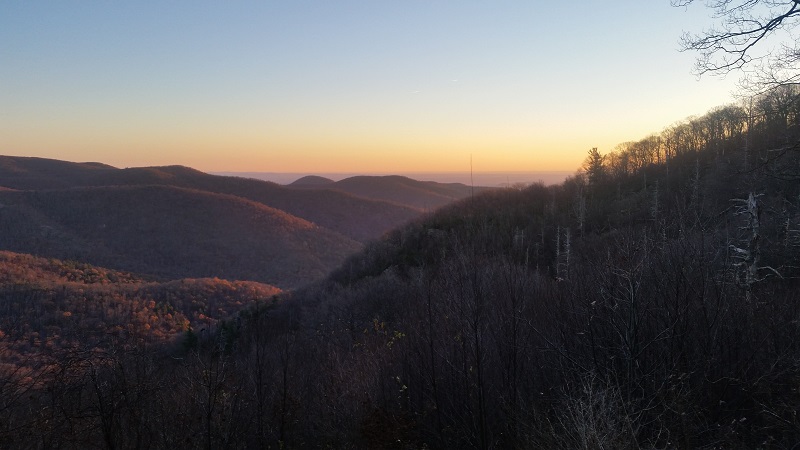 We spent a good deal of Sunday hiking. We hiked from Upper Hawksbill to Hawksbill Mountain (the highest point in the park) in the morning. This is a 2.1 mile roundtrip with an elevation gain of 520 feet on the way to the top. Although we had to rest at one point, it is a wide trail that would be manageable for most adults and kids. At the top, there is a viewing platform that provides spectacular views of the surrounding area. 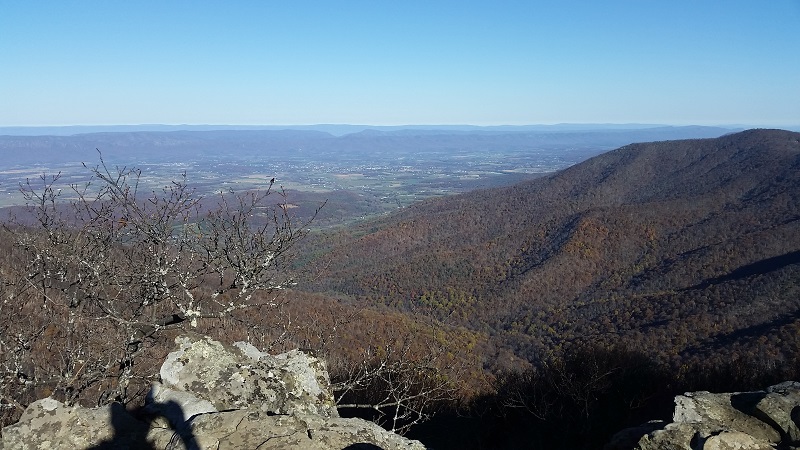 Around midday, we descended to Dark Hollow Falls (which is pretty close to Big Meadows). This is one of the most popular hikes in Virginia. It is a 1.5 mile roundtrip that is rated as moderate to difficult. The average adult and child will find it pretty easy to descend down to the 70 foot waterfall – it is the return trip that can be exhausting. We rested a fair amount on the way back up as there is a pretty steep grade. The view was worth it, though. 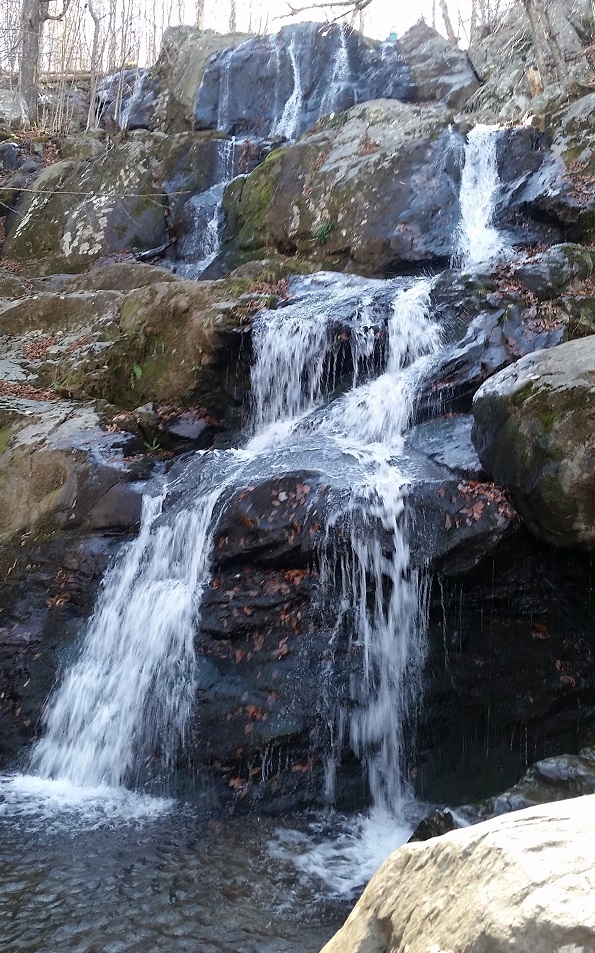 In the early afternoon, we went up to the top of Bearfence Mountain. At the top, there is a magnificent 360 degree view of the area. It was a pretty short but steep uphill from the parking lot. Once you get near the top, it is a moderately difficult scramble across boulders. We managed it ok although there was one difficult moment. Due to the scramble, this is not an area where we would bring young children although there were some parents behind us who did not exercise such caution. 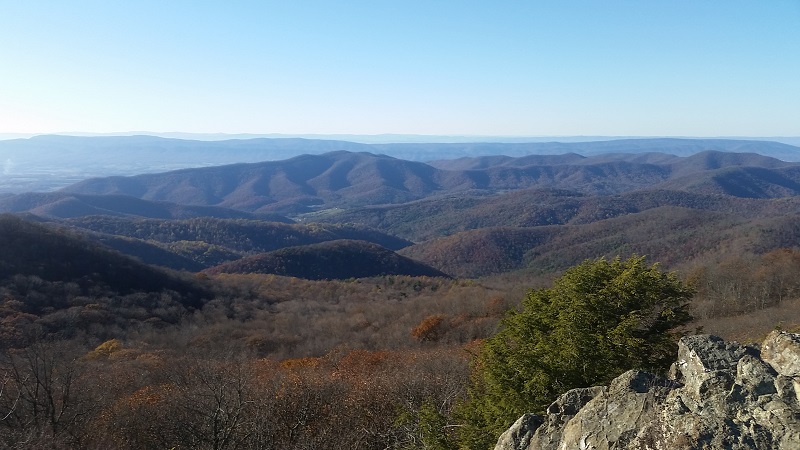 As we were driving north in the evening to exit the park, we saw our second bear of the weekend. We are pretty good at noticing the bearjams and since we did a lot of driving over the two days we saw a lot of deer too. Our bear photos are better from Yellowstone, when we saw cubs too, but we did manage to photograph this one as well: 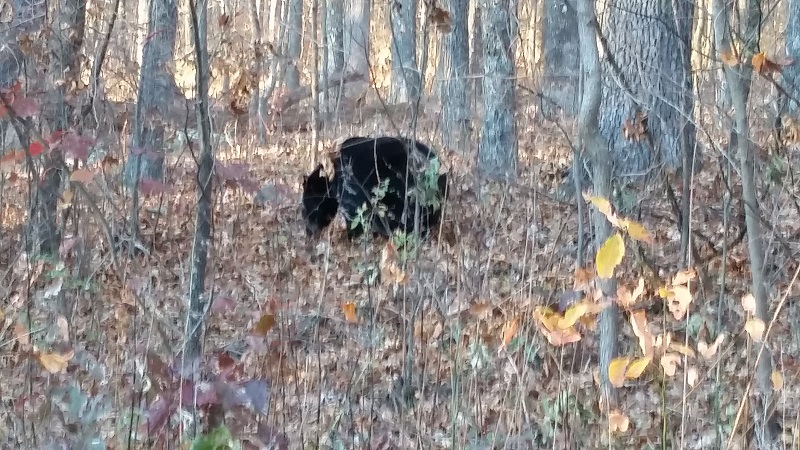 We also noticed that the moon was extraordinarily large. It turned out that we were in Shenandoah for a supermoon. A supermoon is a full moon or new moon that coincides with the moon’s closest distance to Earth. This makes it appear larger-than-usual due to its proximity in its monthly orbit around Earth. Most of our photos ended up blurry because of the low light conditions and the fact that we were driving. Sunday night was the first where they were shutting down 24-7 access, and we did not want to be trapped on Skyline Drive for the evening. 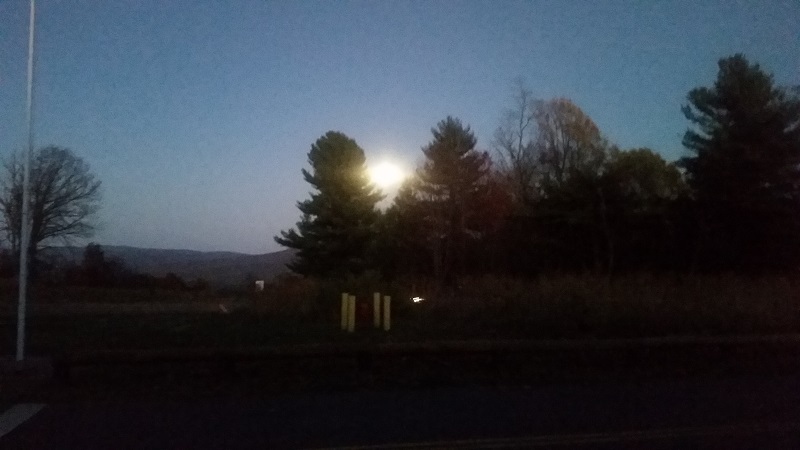 It was a bright finish to a beautiful weekend.