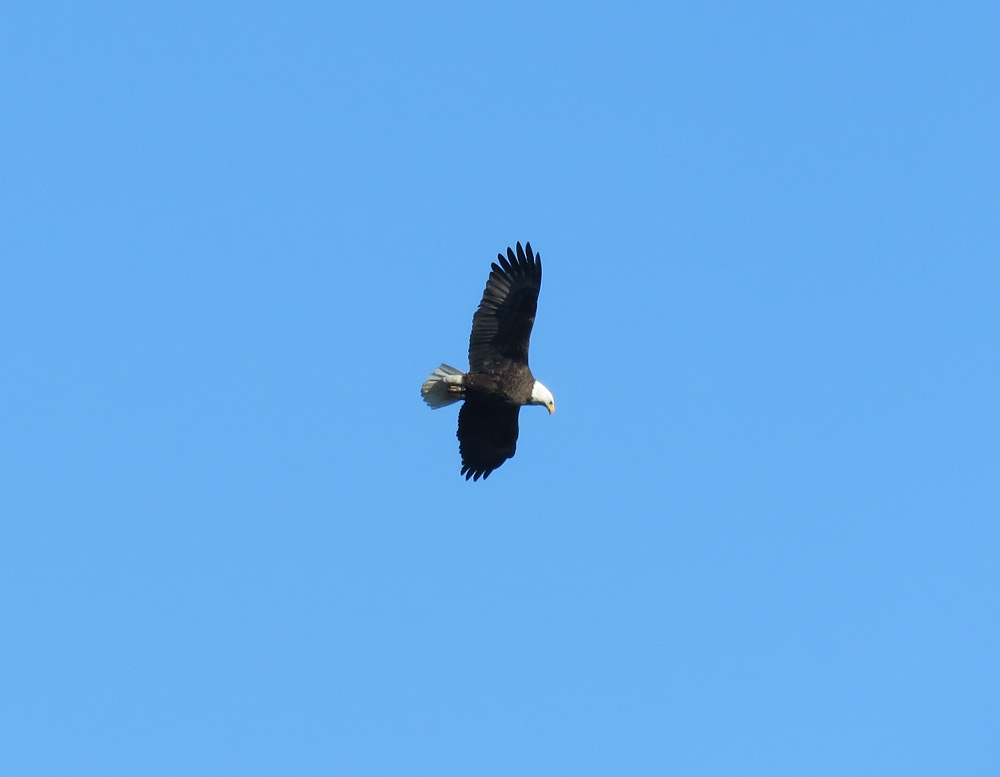 We decided to head down to John Heinz NWR near the Philadelphia airport with our camera again for some March birding.

While we were there, we saw one bald eagle sitting on the nest and the other decided to fly in while we were in the blind on the shore of the impoundment. We were lucky to pick it up very early in the distance, saw it pass the nest, and circle a few times around before it came right at us. We have seen a bunch of eagles in the past year, but I think this is our best photo of one flying yet (pictured above).

The bald eagle ended up landing right next to the blind that we were in! It sat there a while as we admired it, and we ended up getting some great photos! 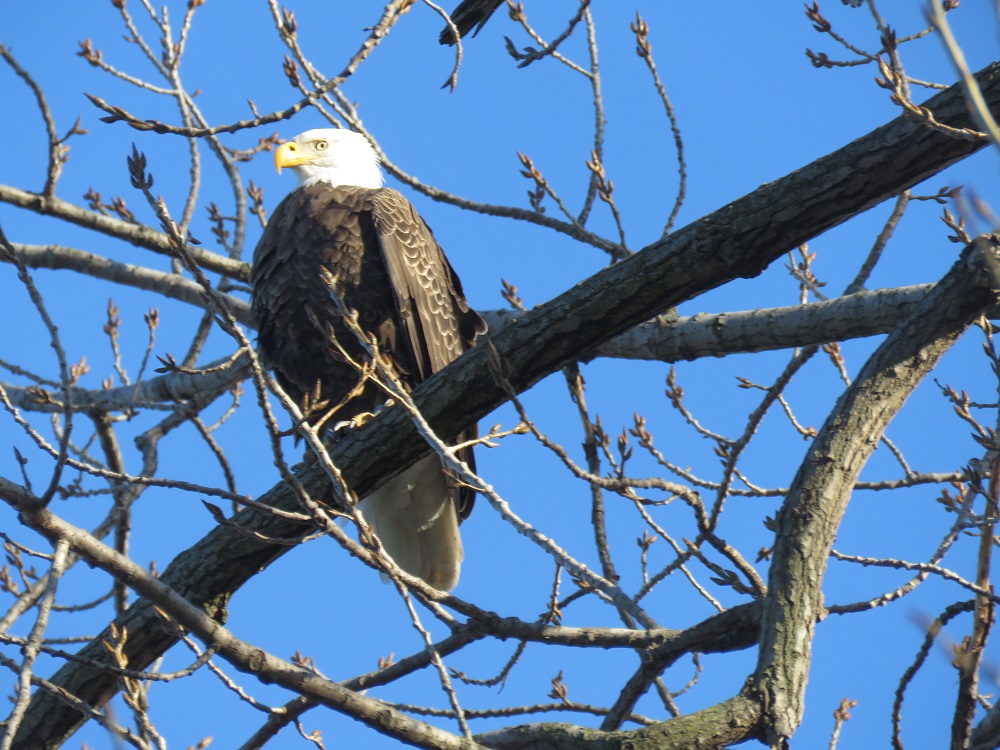 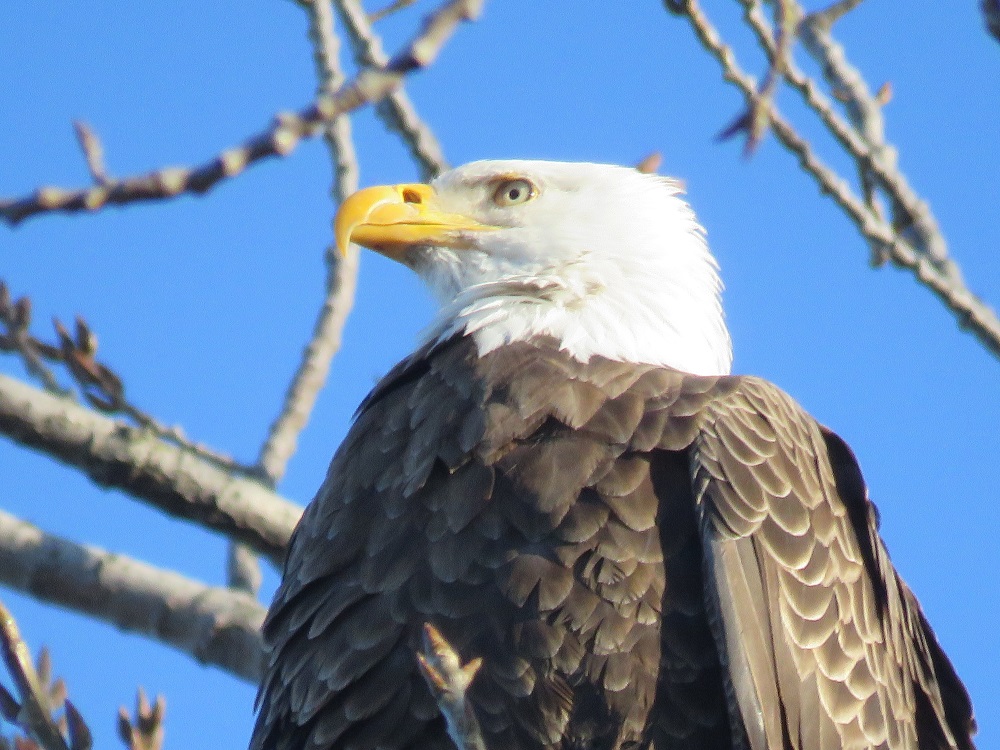 The impoundment was once again a great place to see ducks and other waterfowl. The northern shoveler was one that we have not been able to photograph before. I have to admit that I thought the first few that we saw were just mallard ducks, but one of the other birders pointed out the one that you see here. 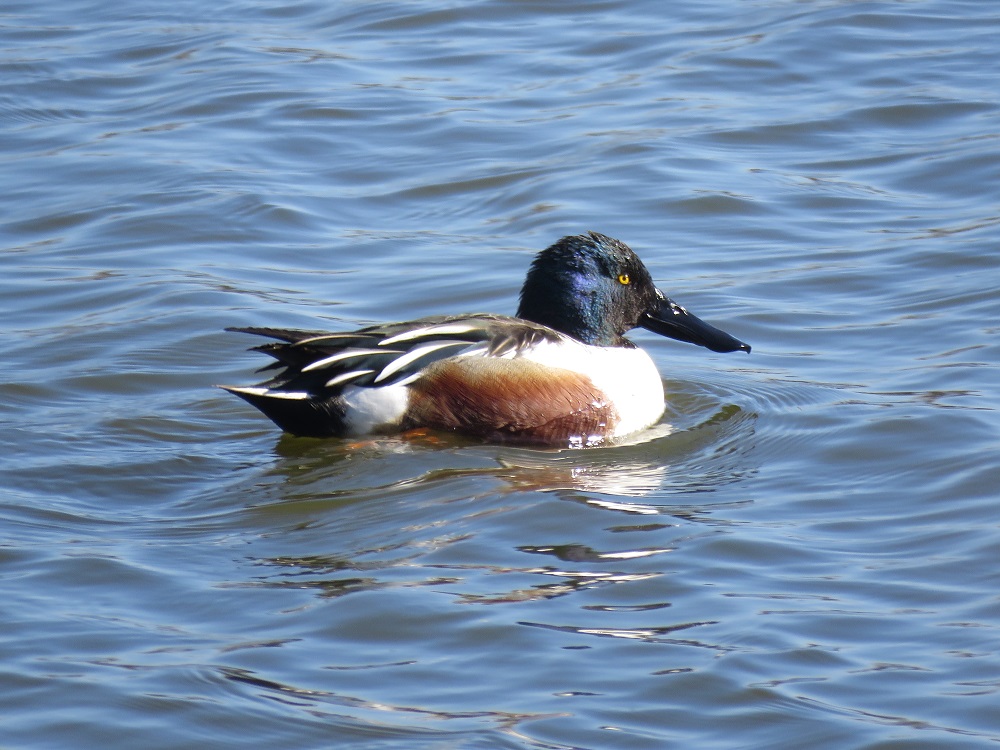 The northern shoveler has a pretty cool beak: 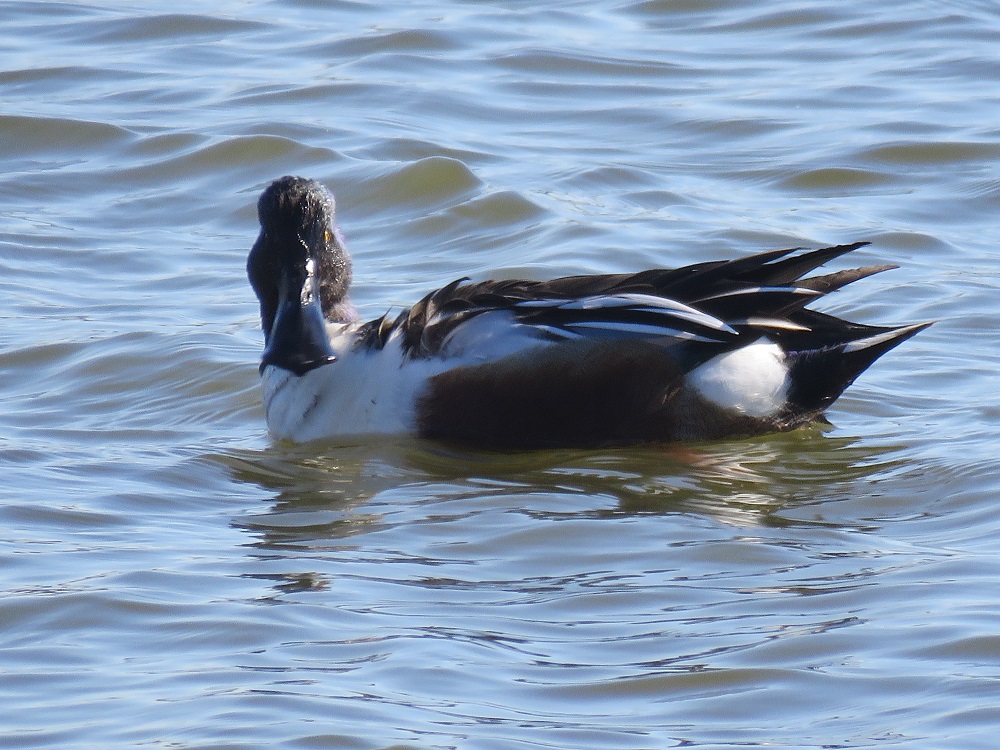 The ring-necked ducks were pretty far across the impoundment. They were having some fun flapping their wings and we managed to get a few good pictures of them despite the distance. 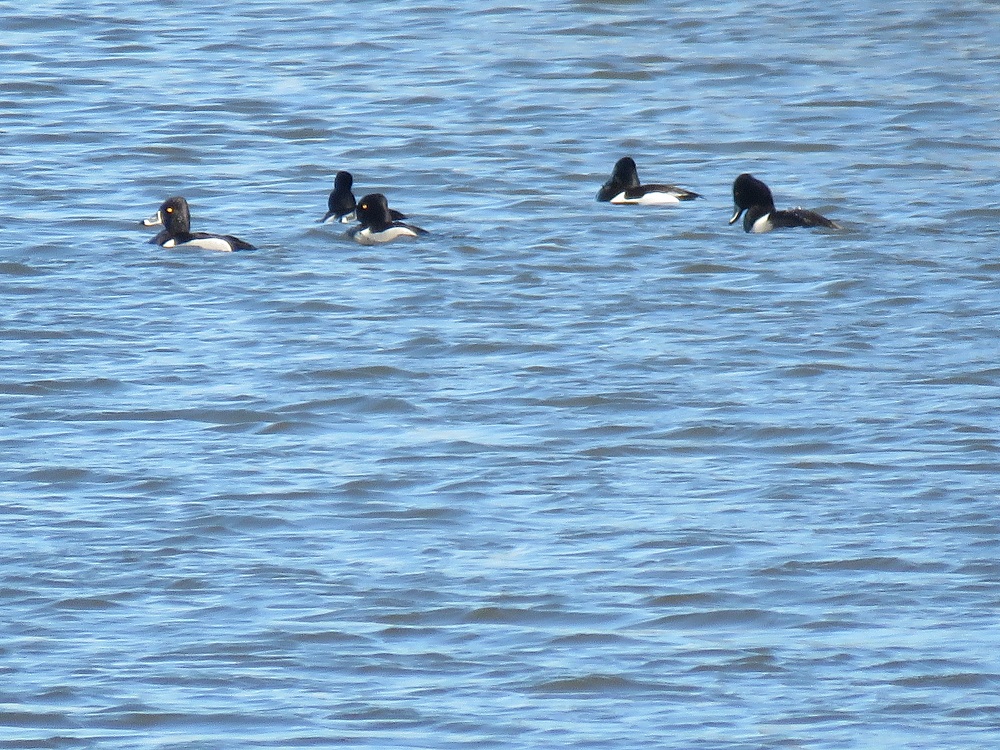 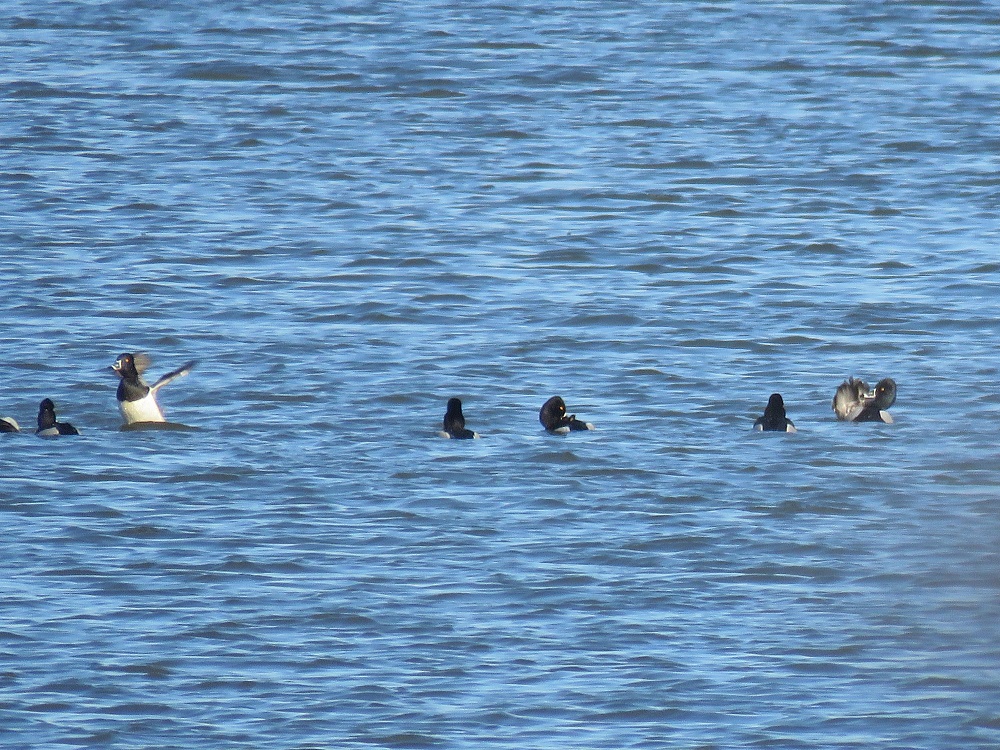 There was also a male and female hooded merganser. I managed to see a few last month but this was Jayne’s first in person. 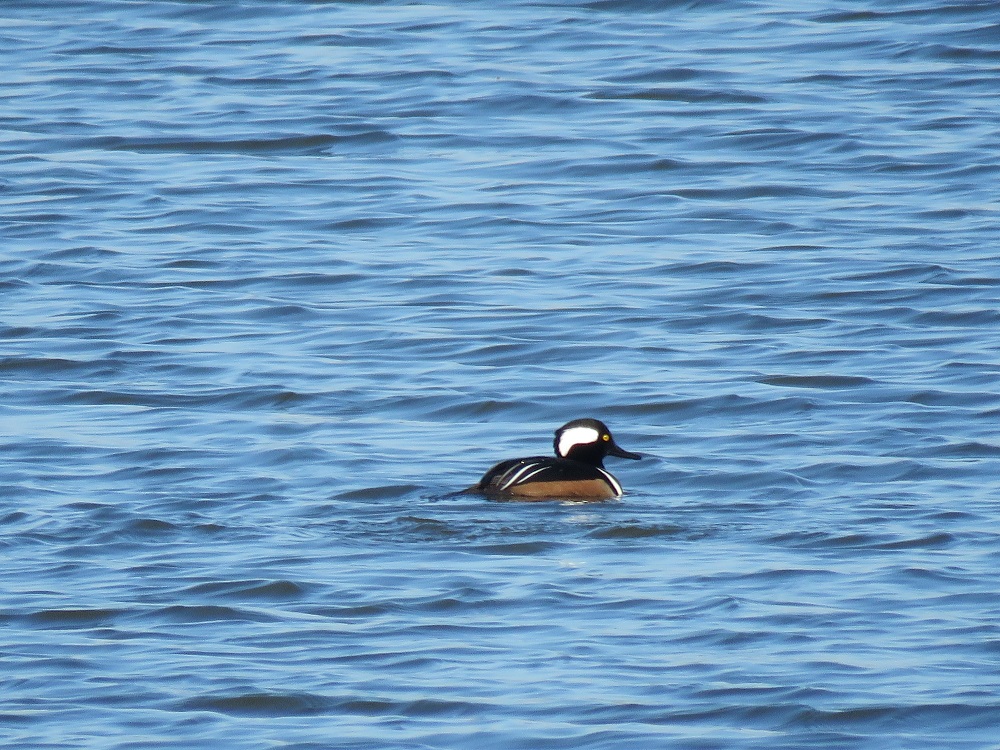 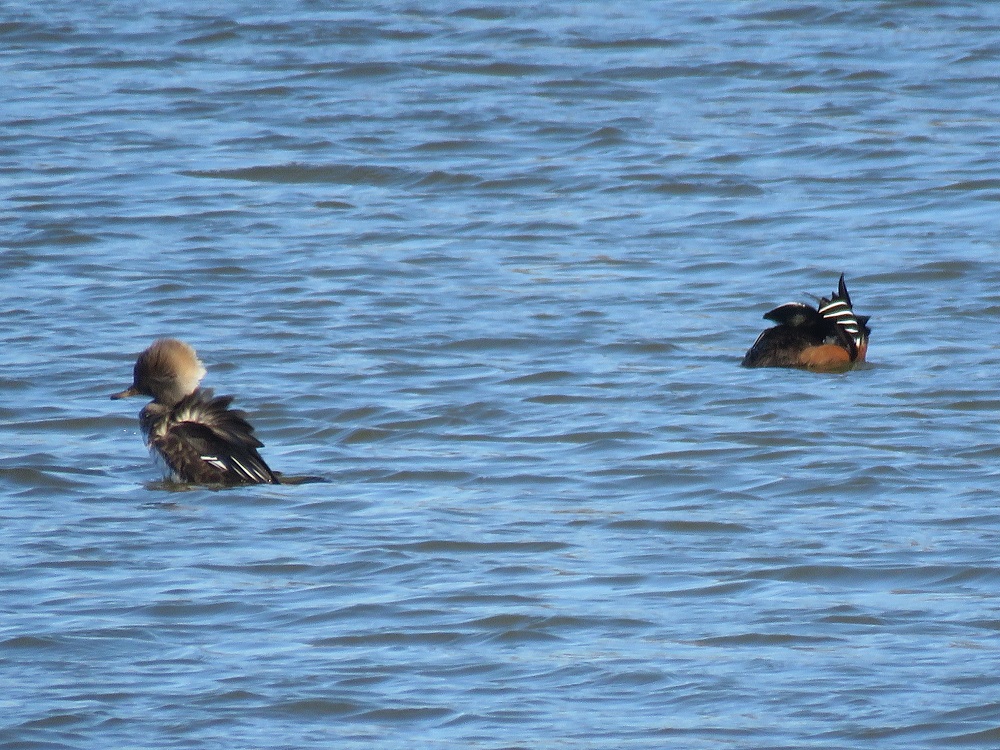 There were a number of other waterfowl on the impoundment. We are by no means experts in identification, but these appear to be gadwall: 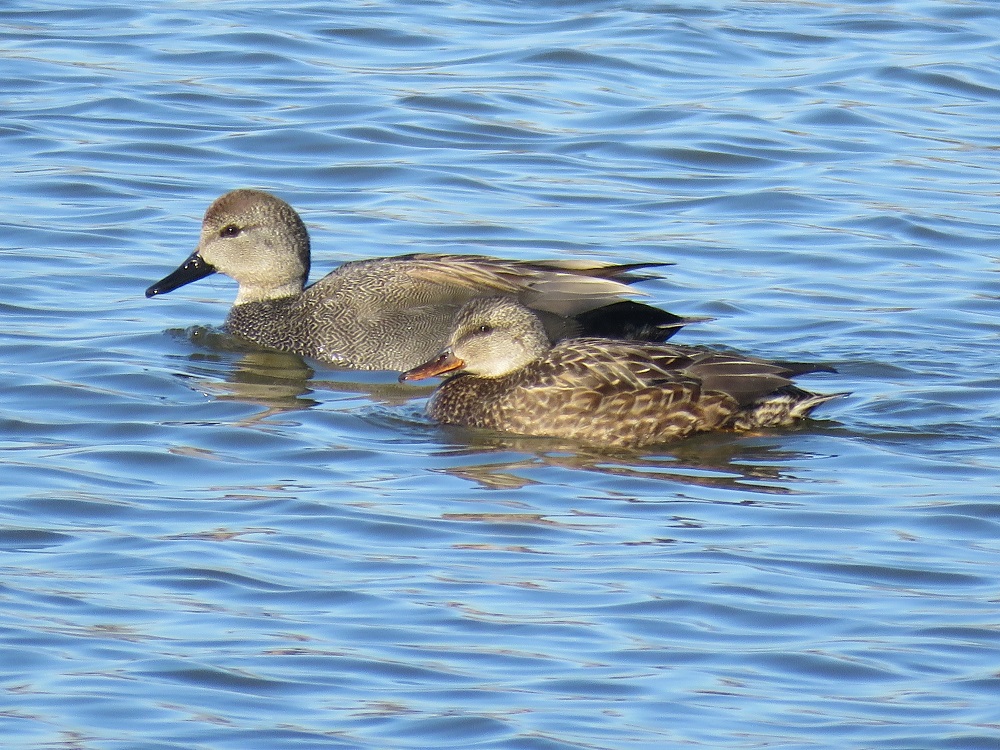 There were still a few swans on the lake (we saw some last time as well), and we got a good photo of this pair: 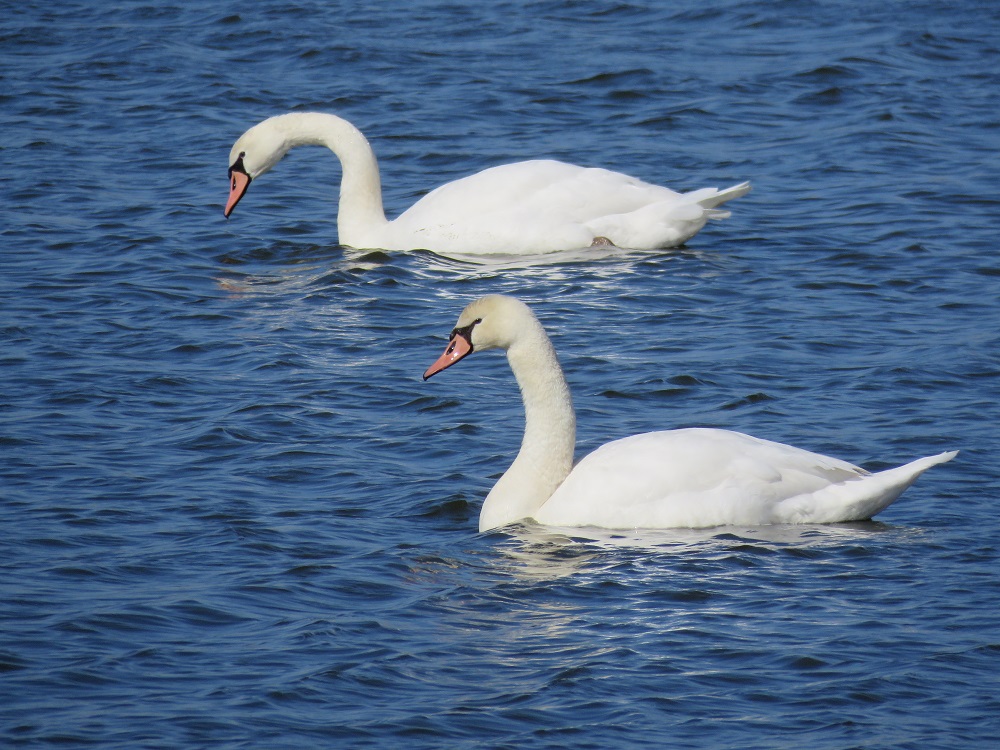 We believe this is a great black-backed gull in the photograph below: 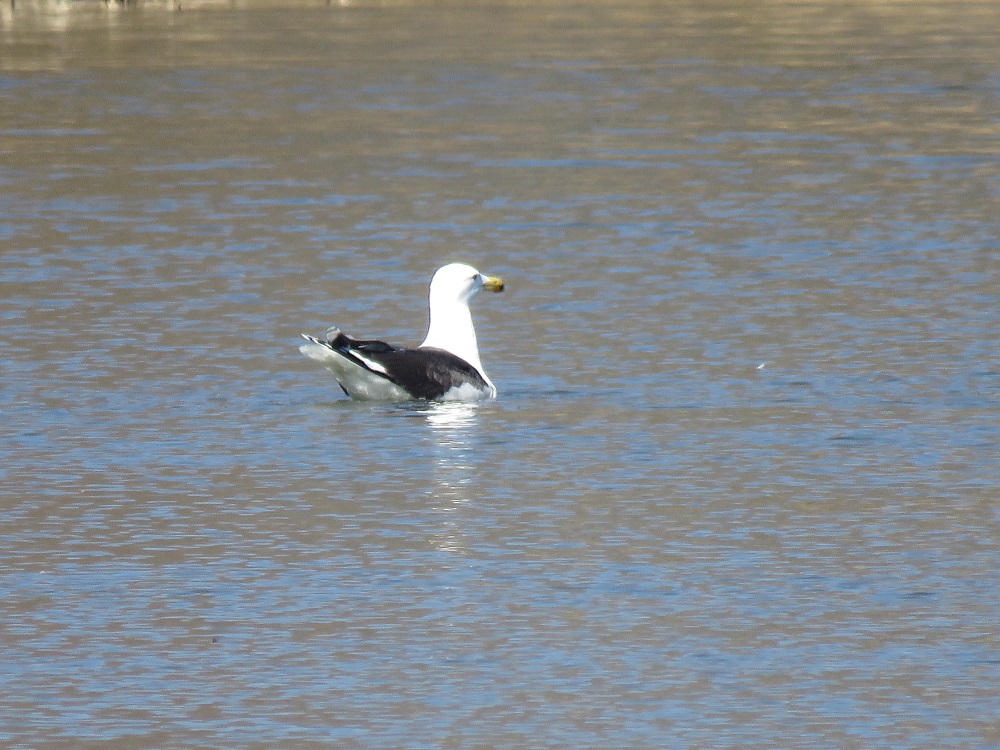 I was just taking a few photos of the flying gull, but realized when I got home that it was carrying a fish. The fish is visible in the photos from both the front and the back (if you look closely). 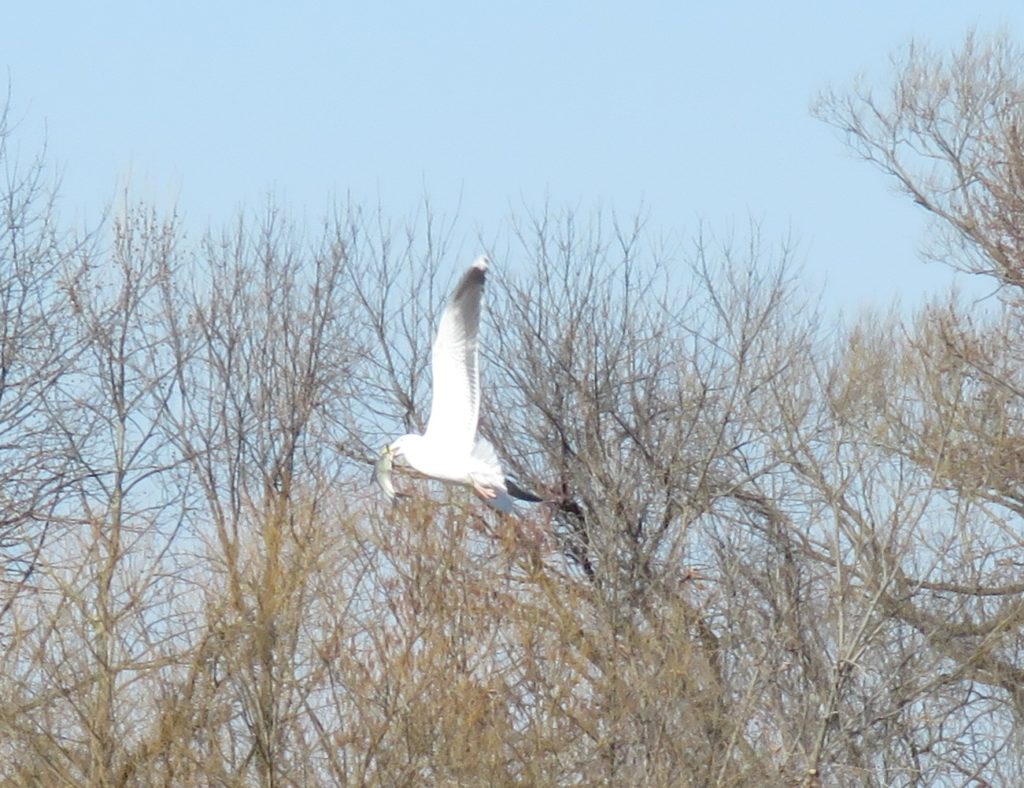 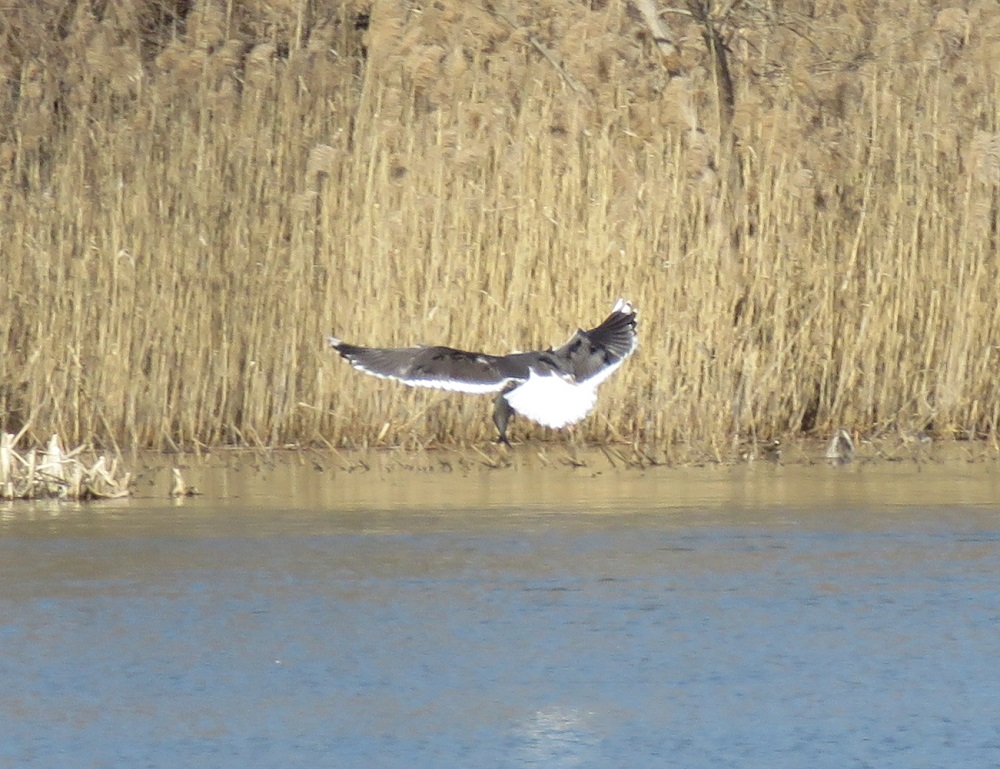 We saw a number of great blue herons during our walk. This was the first of them: 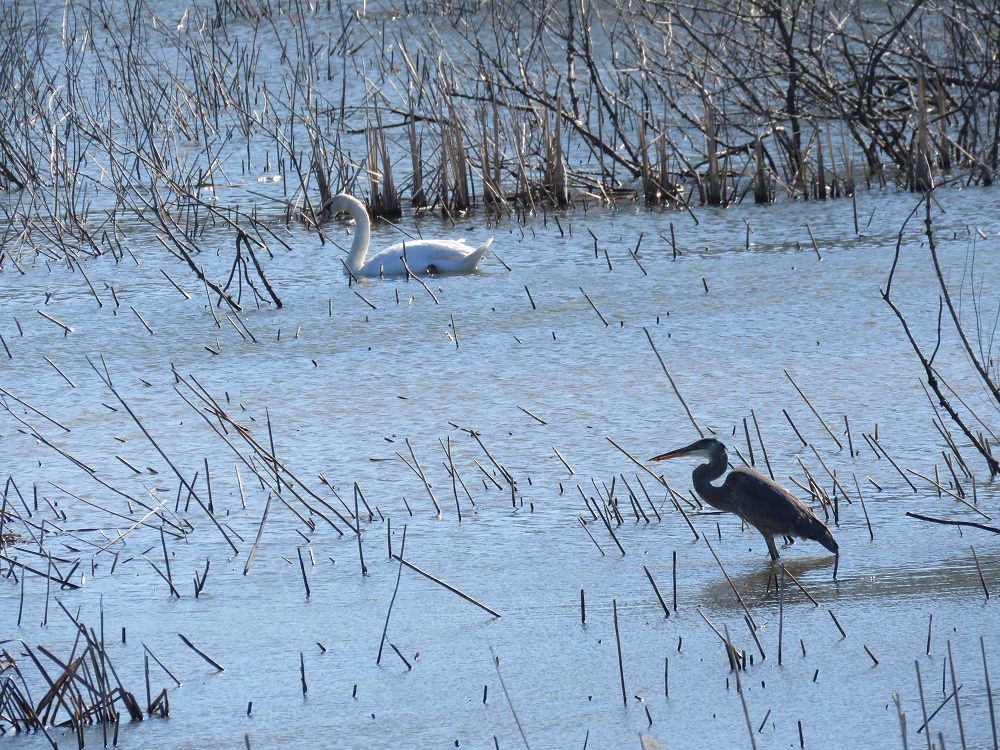 We heard the sound of a woodpecker in the woods and we searched around for a bit before locating one. We never saw the classic red feathers on the head, but the coloring of the downy woodpecker is pretty distinct: 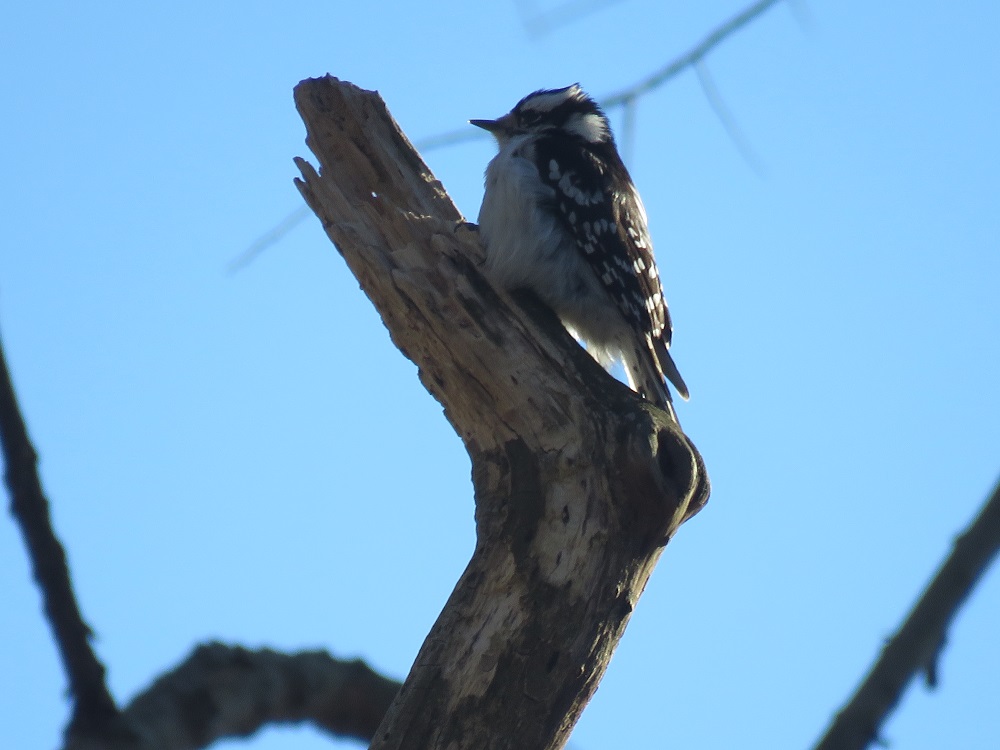 After we saw the bald eagle, we continued around the impoundment and saw two more great blue herons. At the south side of the impoundment, we saw this eastern phoebe flying between a few of the branches. 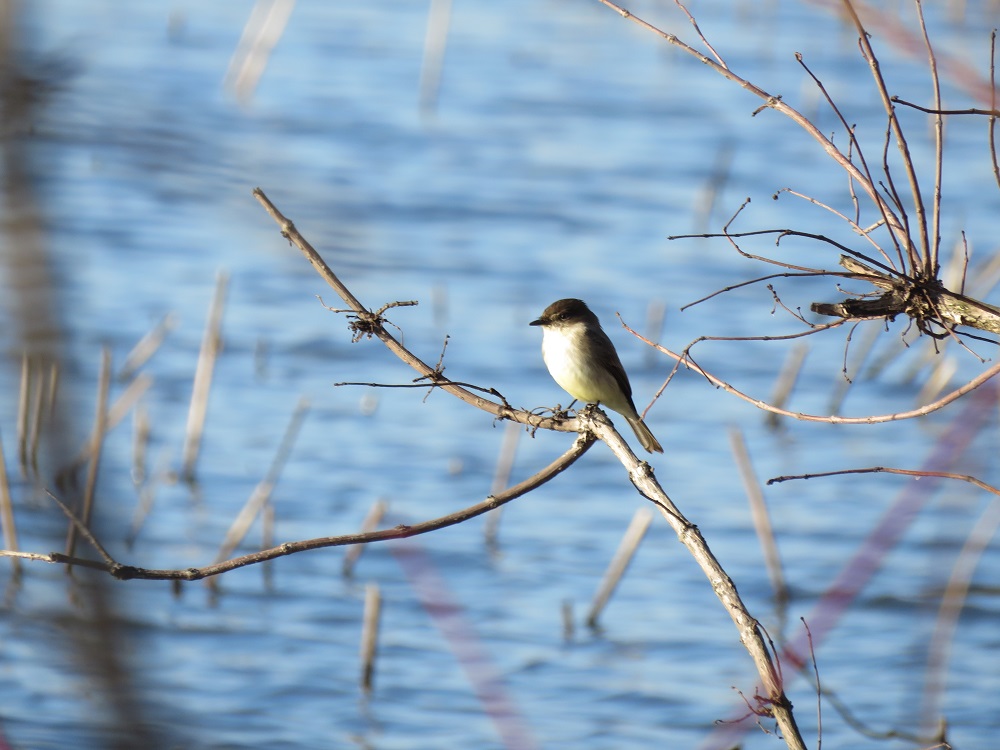 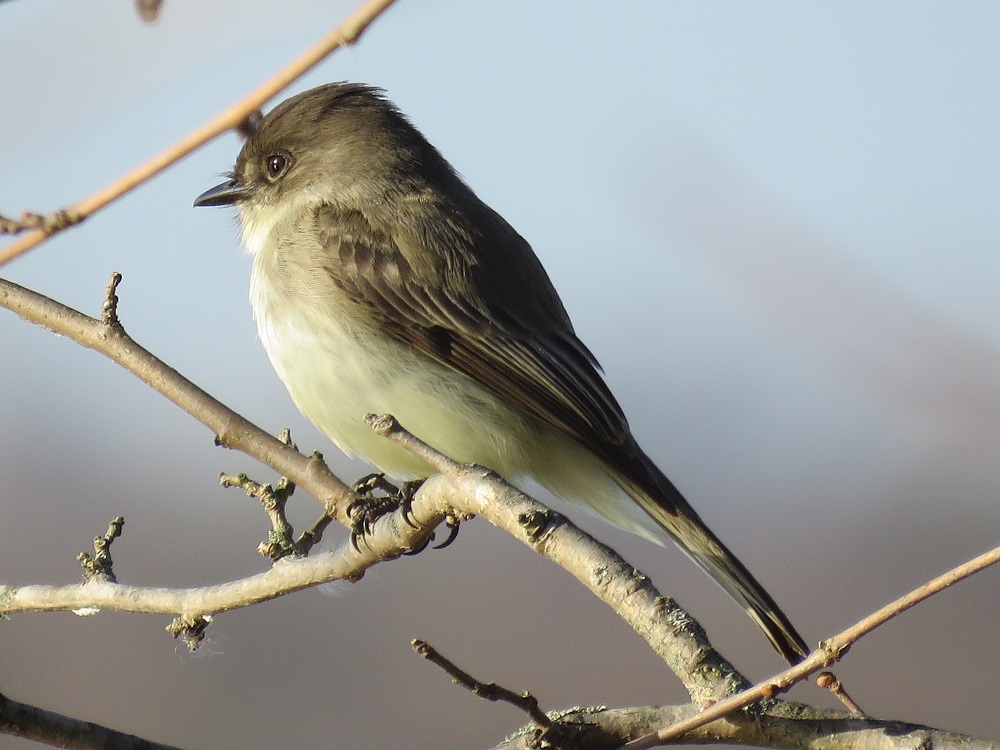 Last time we were at the National Wildlife Refuge, we were crossing the impoundment on the boardwalk on the way back to the car and we just were not able to get a good photograph of the small birds flying back and forth amidst the reeds. However, we saw one of them perched long enough for us to take several photos today of the swamp sparrow:

This little sparrow was sitting not far from the downy woodpecker. I think it is a white throated sparrow although the angle does not lend itself to seeing the color of the throat. 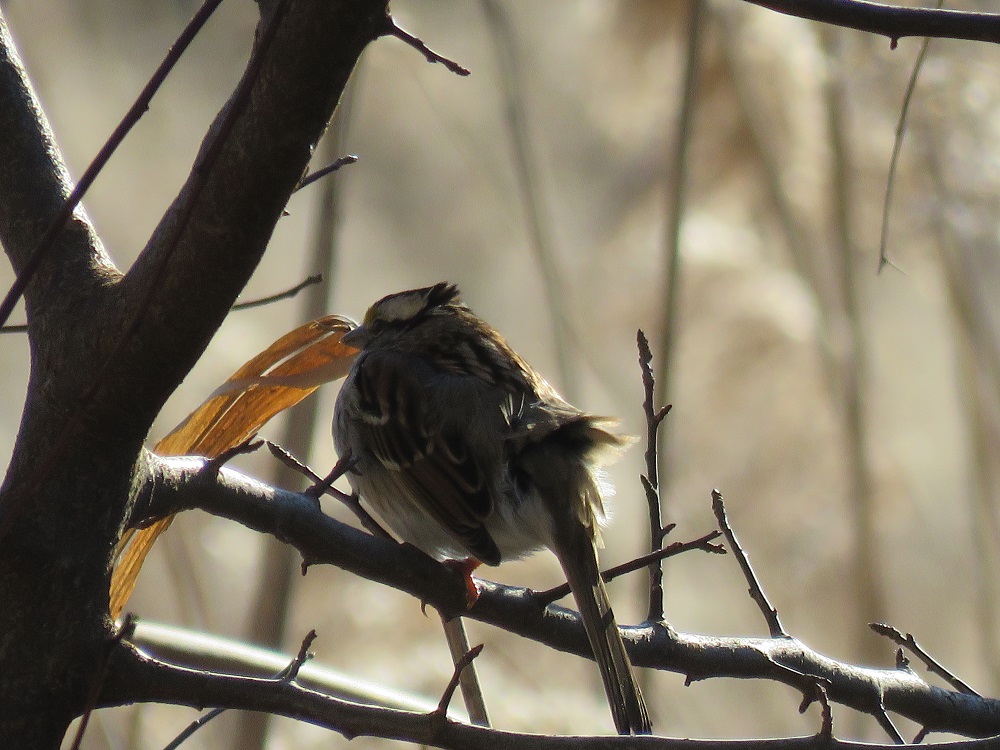