We stopped an hour short of Grand Teton National Park the night before we entered the park since the sun was setting on our drive from Rocky Mountain National Park. We spent the night camping at the Dubois/Wind River KOA in Dubois, Wyoming since we didn’t have a campground reservation in the park and we weren’t especially eager to press our luck looking for a place to spend the night in the dark.

On the remaining drive, we passed through Bridger-Teton National Forest and the mountains that make up the Continental Divide to the east of the park. Once we cleared those mountains, we entered the park to an an impressive view of the Grand Teton range.

We entered the park at Moran Entrance on the east side of the park. We made our way to the Jenny Lake Campground to ensure that we got a spot, stopping only at Oxbow Bend and Jackson Lake Dam in order to take some photos (we couldn’t resist since the scenery was so beautiful). 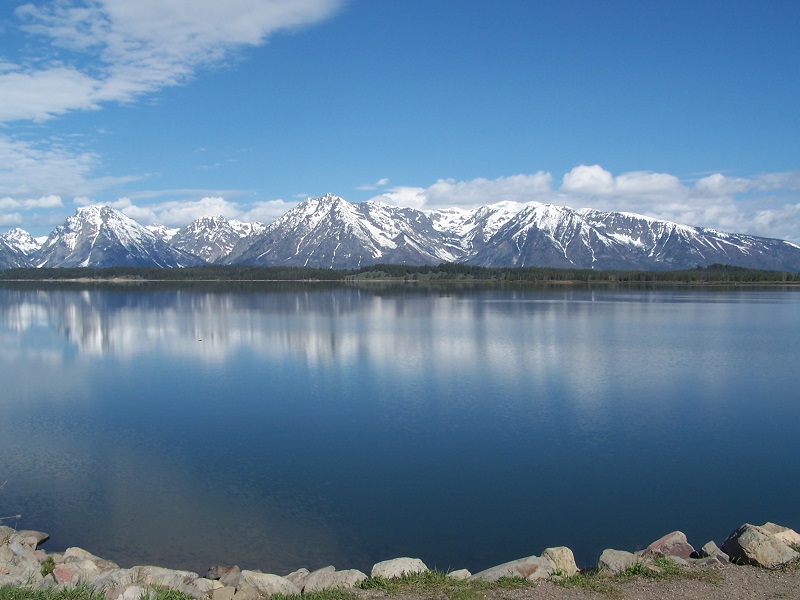 We ended up staying at Jenny Lake Campground, which is a first-come first-served campground inside the national park that borders Jenny Lake. We searched the available campsites for the best view, and several times we abandoned an earlier selection for a better view that we found later. We ultimately went with site #48. We didn’t get to enjoy it as much as we would like, since several days were rainy or overcast. But we would choose it again in a heartbeat if we had the option.

Jenny Lake is a 1,191 acre lake to the south of Jackson Lake. It was formed approximately 12,000 years ago by glaciers. It is a focal area of the park with some of the tallest peaks of the Teton Range there, as well as scenic boat rides and hiking trails. 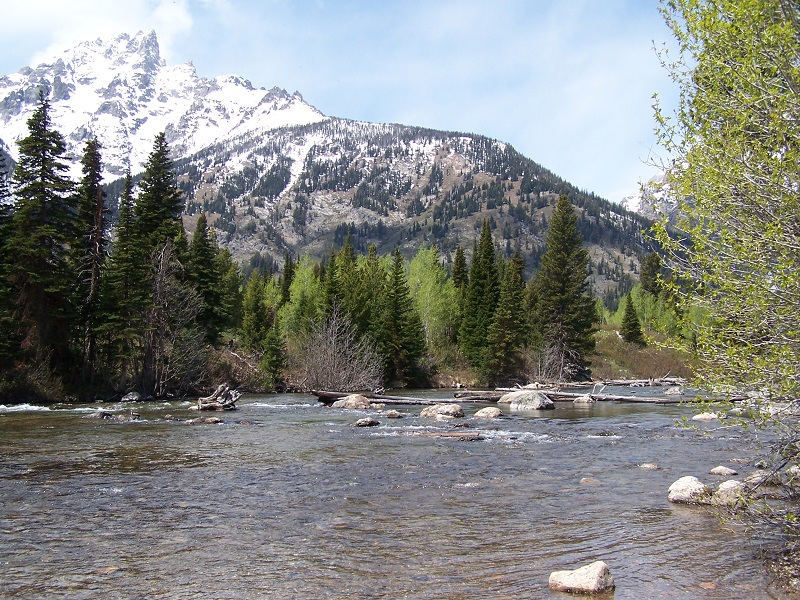 (View of stream below Jenny Lake and mountain)

After we set up our tent, we went down to the visitor center and walked around the marina. A park ranger on the horse bridge pointed out a bald eagle flying over the lake.

We just couldn’t get enough of the mountain range, so we headed north to see the mountains from the resorts across Jackson Lake. We stopped at Signal Mountain Lodge to check into the guided fishing tours and buy our fishing licenses. Then we headed to Jackson Lake Lodge, which has a picturesque view of the mountains from the second floor of the lodge/great room. Even though we had plenty of other items on our agenda for the day, we spent a few minutes out on the porch staring at the beauty before us.

We left the park and headed south on 89, which runs parallel to the mountains towards Jackson. Along the route we found the Cunningham Cabin Historic Site, where the oldest historic building in the park stands. J Pierce Cunningham, initially opposed to the creation of the park, later saw the value in preserving the area. Along with his mother, Cunningham began a petition signed by all 97 ranchers in the area to sell their land to John D Rockefeller Jr to be donated to the federal government for the creation of the national park.

Next we stopped at the Snake River Overlook, the place where Ansel Adams took his famous 1942 photo of the Snake River and the Grand Tetons. We snapped a few photos ourselves, although the terrain looks a little different than it did back then! 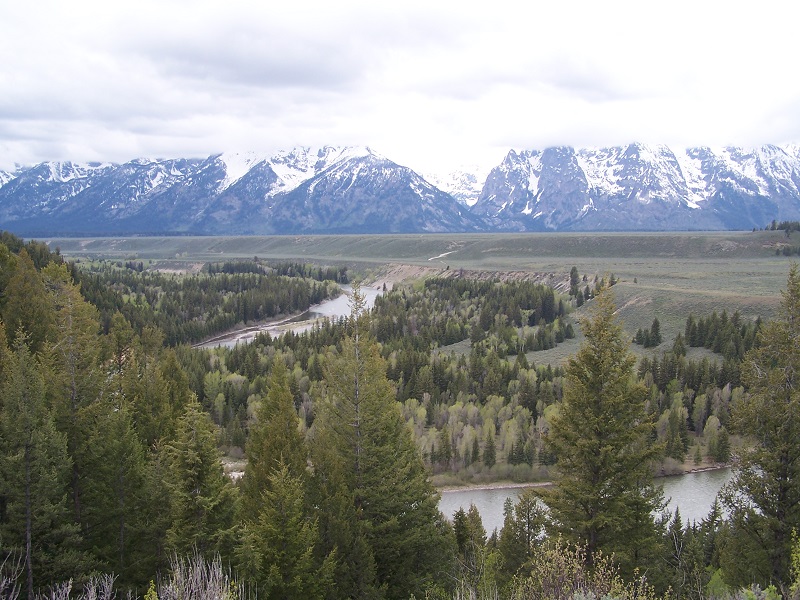 We arrived at Schwabacher Landing in the early afternoon. Schwabacher Landing is an access area to the Snake River that is east of the Grand Tetons. It is a popular spot for professional photographers in the early morning because the water there provides a beautiful reflection of the mountains in the photos during the sunrise. The large beaver dam and resulting ponds are also a popular place to see moose. It is located four miles north of Moose on US-191, off a small dirt road to the west. Unfortunately, the raindrops started shortly after we got there, so we didn’t stay long. We will have to get there earlier next time. 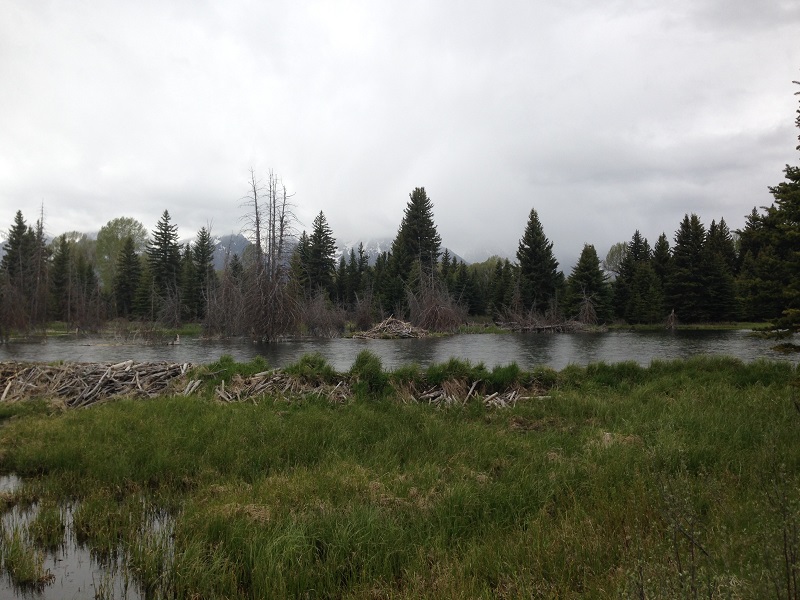 After we finished at Schwabacher Landing, we drove down the Mormon Row Historic District on our way to Jackson. It was still pretty overcast, so our pictures don’t match the beautiful photographs that people normally take from this area with the barns in the foreground and the mountains in the background. 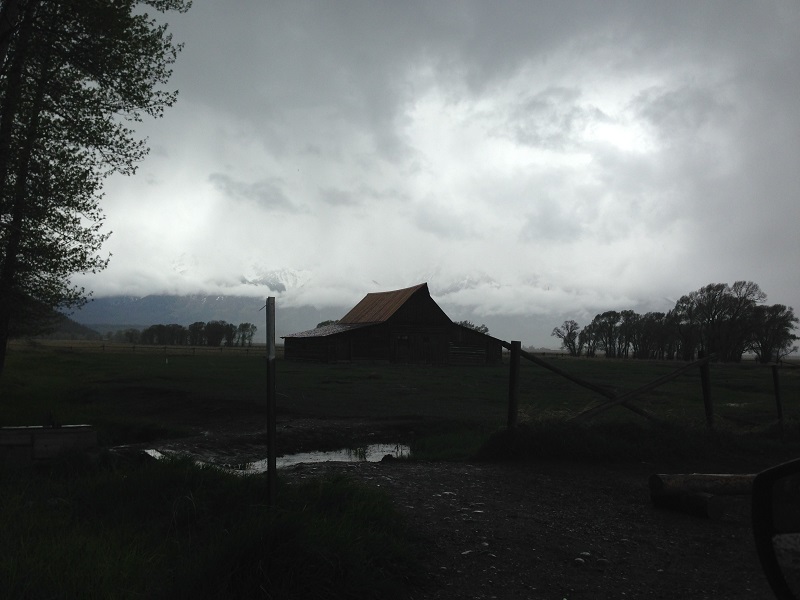 On our way to Jackson, we took 89 past the National Elk Refuge. In the fall and winter, it is a popular area to observe the majestic herds that inhabit the area. We spent the evening in Jackson, Wyoming. It is a resort town popular for world-class skiing, abundant wildlife, outdoor recreation and a gateway to Grand Teton National Park. It is located in Jackson Hole, which is a 48 mile long valley that is typically six to eight miles wide. We walked around the downtown area a bit and had a beer flight plus meal at Snake River Brewing. We definitely regretted that we did not have more time to explore this town.

The next morning began with a little bit of rain, but it eased slightly so that we could make breakfast. This was our day to go fishing, and we chose to start in the Snake River below the Jackson Lake Dam due to the weather. After a little rain, it turned into a beautiful morning. We didn’t catch any fish, but we agreed that it was probably the prettiest location that either one of us has ever gone fishing. 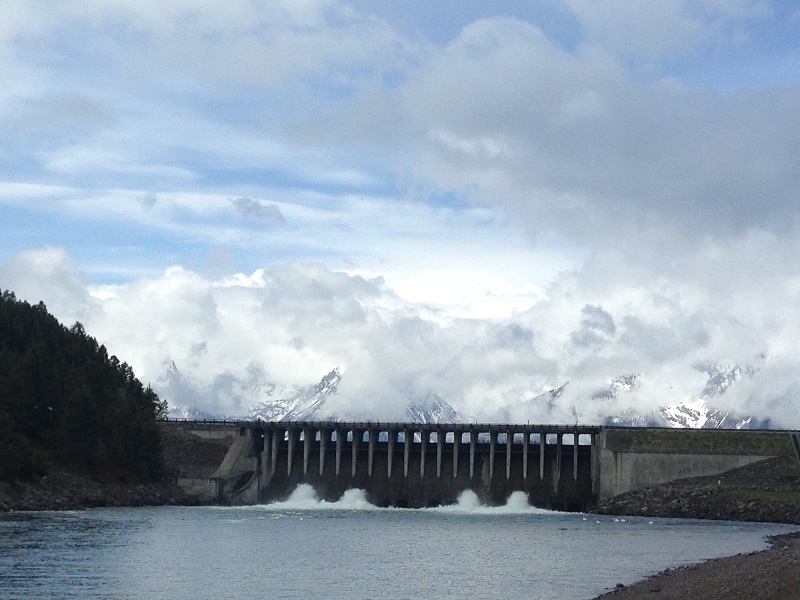 We did lunch at String Lake, which is right above Jenny Lake. There were picnic tables overlooking the lake, and we watched paddle-boarders and kayaks on the water while we ate. When we finished, we grabbed our gear and started towards the trailhead. Unfortunately, we only had time to do a short hike before we had to turn back due to the oncoming rain. We did manage to see an osprey perched over the lake and admire the areas rejuvenation after a fire in 1999.

We decided the rain was a good opportunity to change locations, so we headed south toward Moose-Wilson Road. We didn’t see any moose, but we did have a nice hike through the Laurence S Rockefeller Preserve. Once owned by the Rockefellers, we remarked throughout our time on the property how amazing it must be to live like a Rockefeller. The one mile hike up to Phelps Lake was beautiful, beginning with paths and bridges leading to waterfalls and rapids, before ending in a beautiful subalpine lake. We turned back when we started to worry about darkness, but the 20 minute hike up through the property was something that we would both do again.

Since we spent the previous evening in town, we drove north from the preserve to Signal Mountain Summit. It is supposed to be one of the best places to watch the sunset in the park. The sunset disappointed, however, because we learned when we got to the top that we should have stopped along the way because the end of the road faces east towards the valley rather than west towards the mountains and sunset. When we headed back down, the clouds and trees didn’t cooperate with our search for a truly spectacular sunset. However, we did find a cell phone tower at the top of the mountain. We had spotty cell phone reception throughout the park and this was the one place that we both had multiple bars. 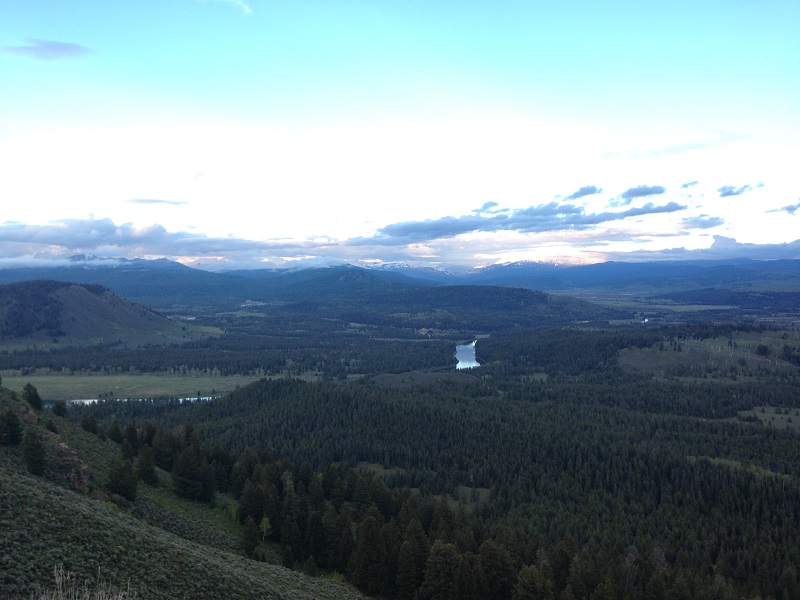 When we got back to our tent at Jenny Lake, we were in for another rainy evening. We were getting used to the afternoon and evening storms, so the rain out of our dinner plans only had a mild impact on our mood. We knew that we would be packing up early in the morning to make the trip north to Yellowstone. And we were very excited to get to see this gem of the national park system.