Fort Jefferson takes up 10 acres of the 16 acre Garden Key. It is the main destination for visitors to Dry Tortugas National Park.

Fort Jefferson was built to secure the Florida Reef and strategic deep water harbor located in the Dry Tortugas. It was never completed. It is the third largest seacoast fortificiation built by the United States and was named for President Thomas Jefferson. 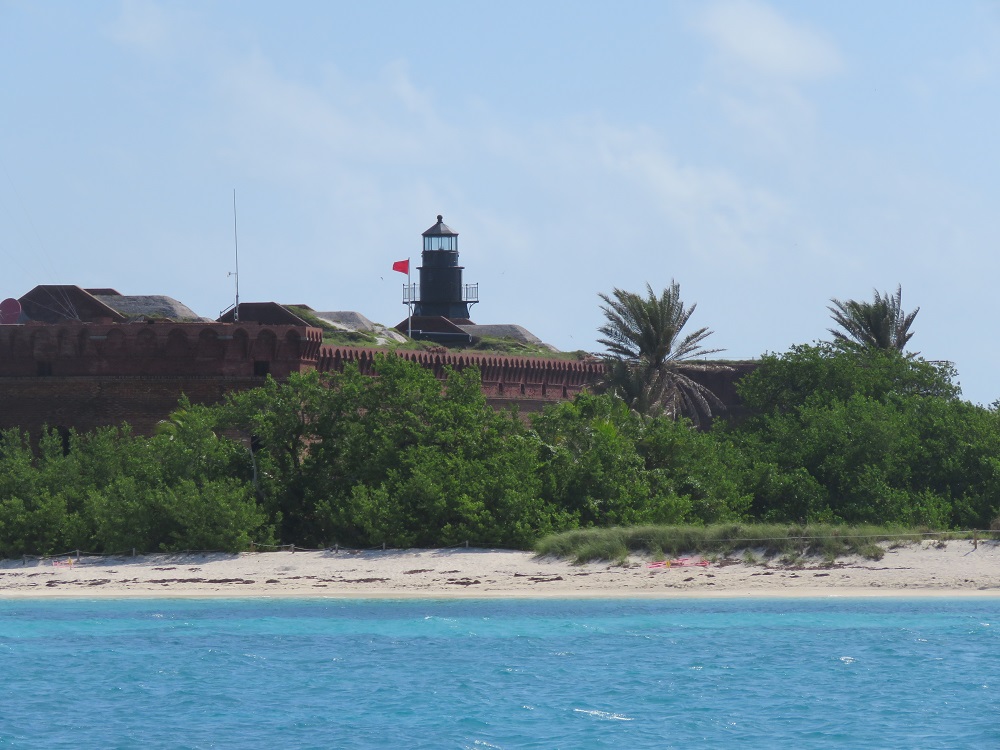 The Garden Key Light was a lighthouse erected on Garden Key between 1824 and 1826. The lighthouse and its outbuildings were the only structures on Garden Key until the construction of Fort Jefferson. The 1826 light was damaged by hurricanes and replaced by an iron harbor light in 1876. 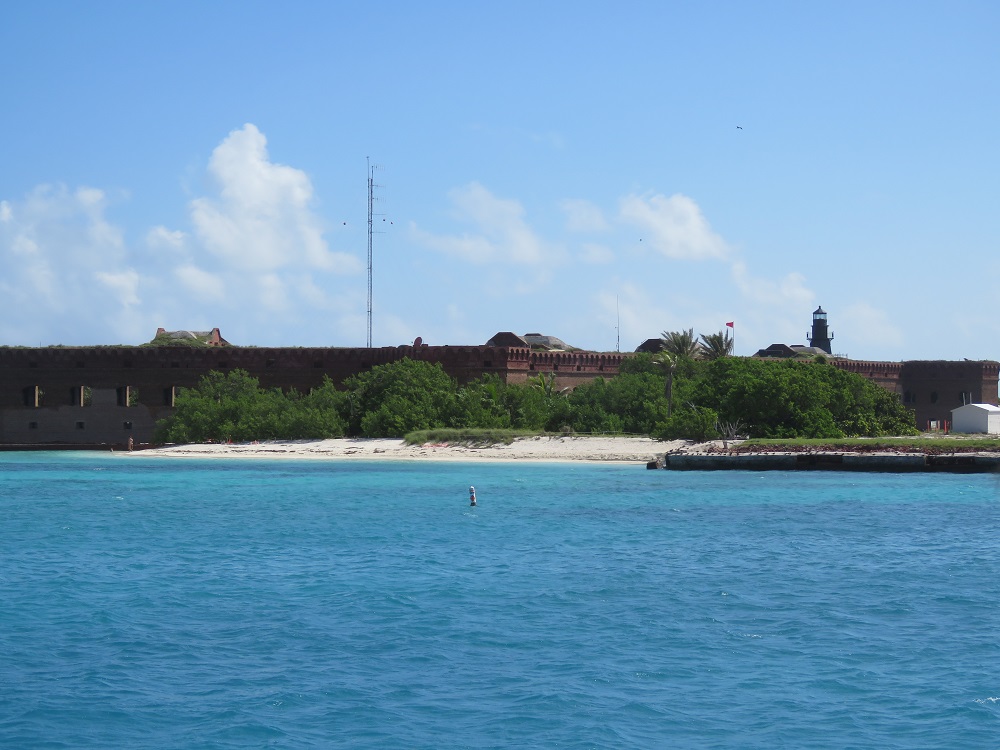 This is a popular swimming area and the starting point for our snorkeling in the park. It sits near the campground. 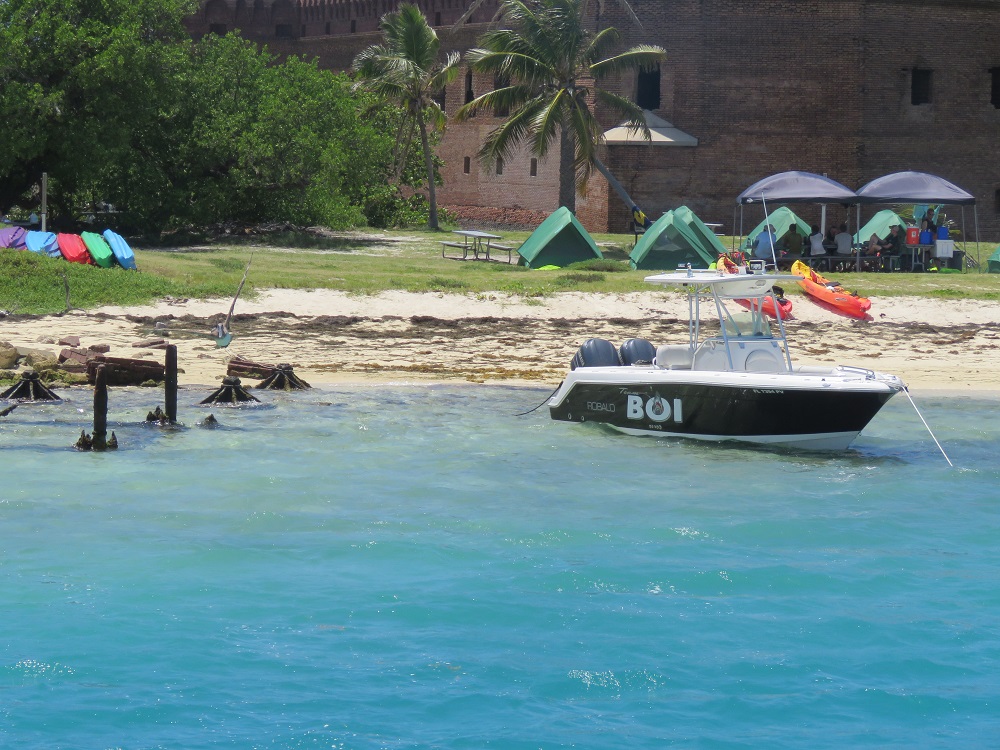 This is the launching point for kayaks sitting outside the campground and between the South Coaling Dock Ruins and the dock for the Yankee Freedom. 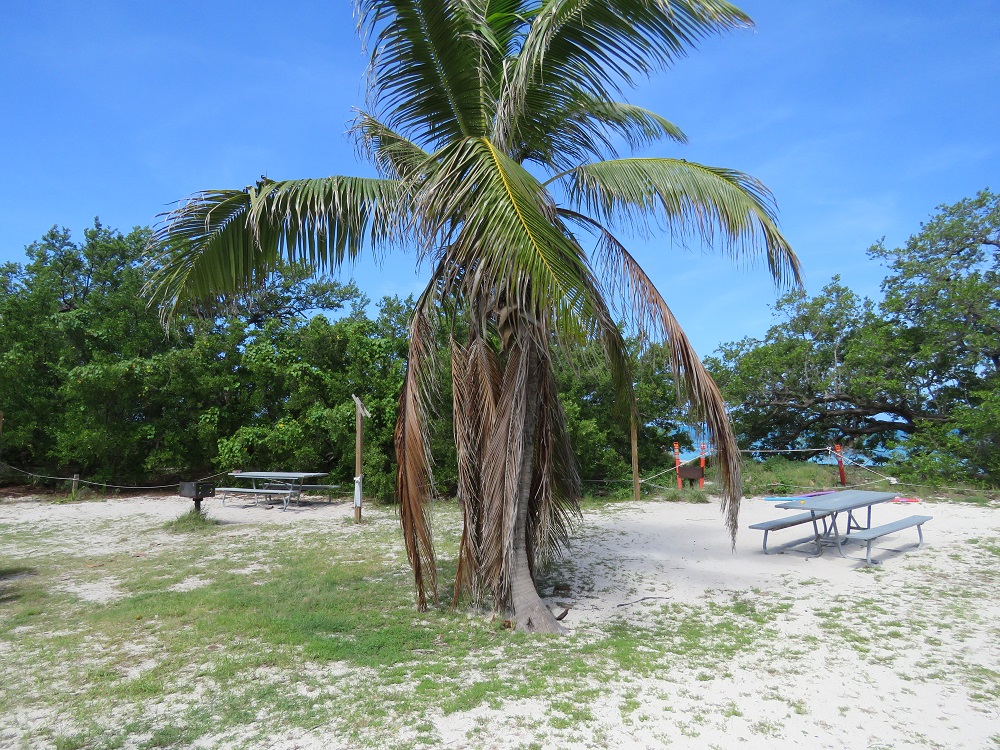 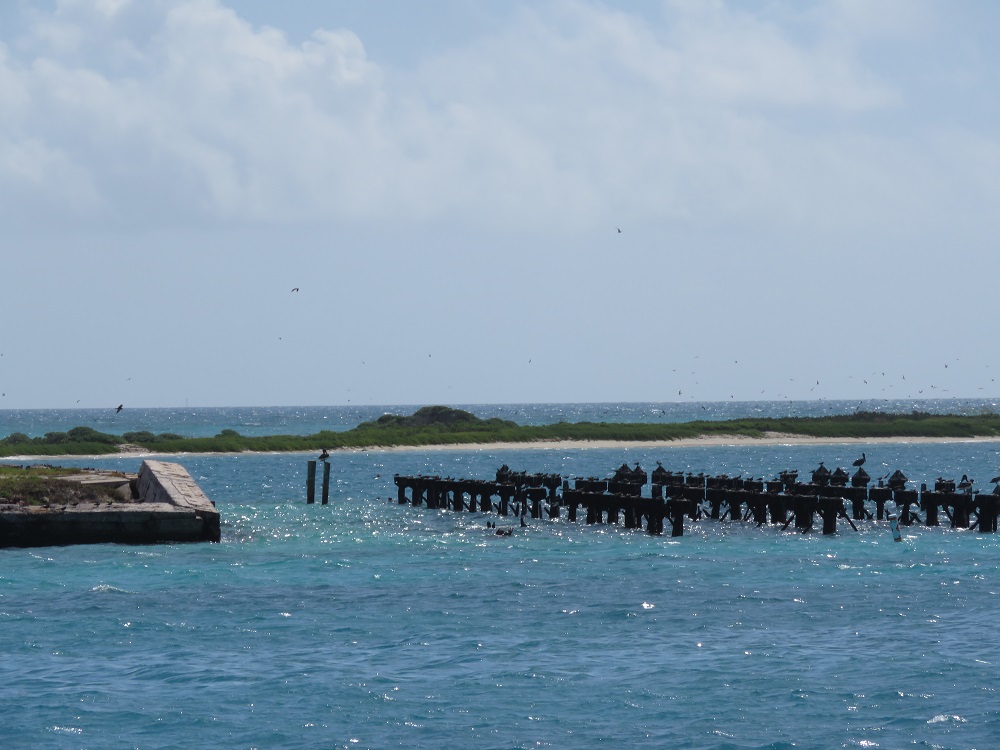 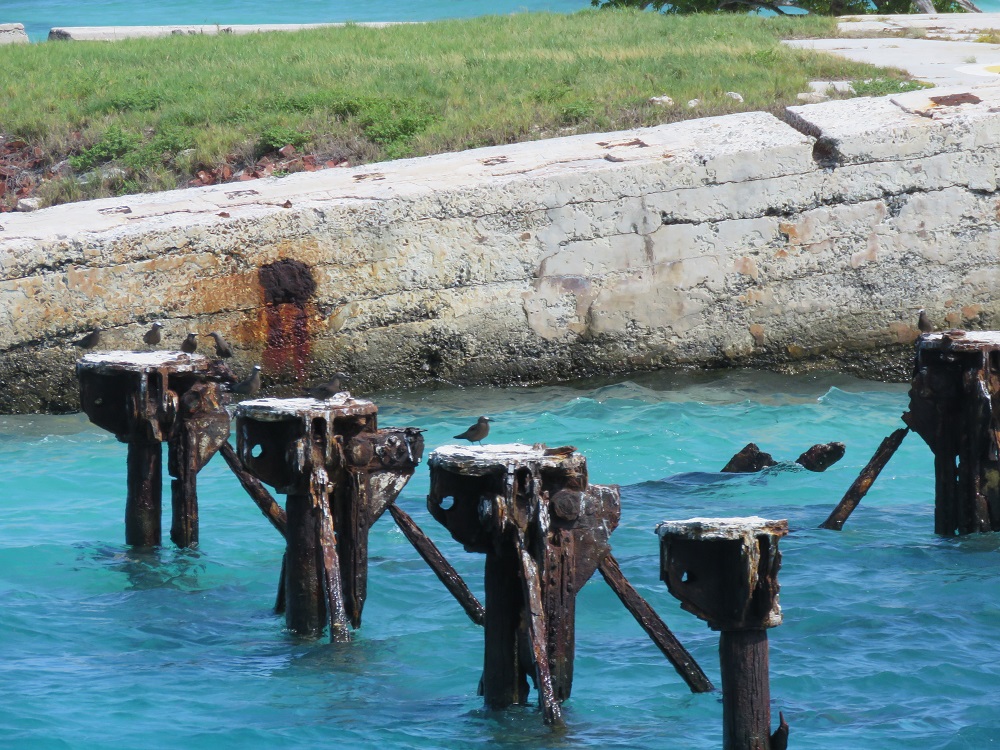 Coaling warehouses and docks were built at the fort in 1898 to serve as a supply depot for battleships which needed coal. They are now occupied by birds and marked as a great area to go snorkeling. 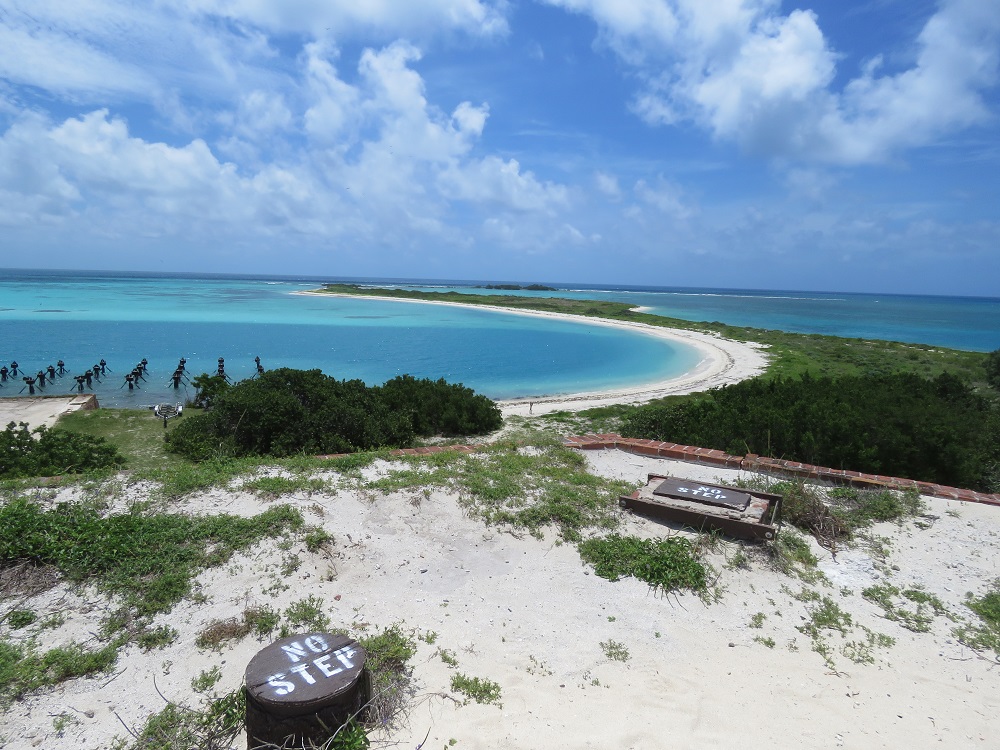 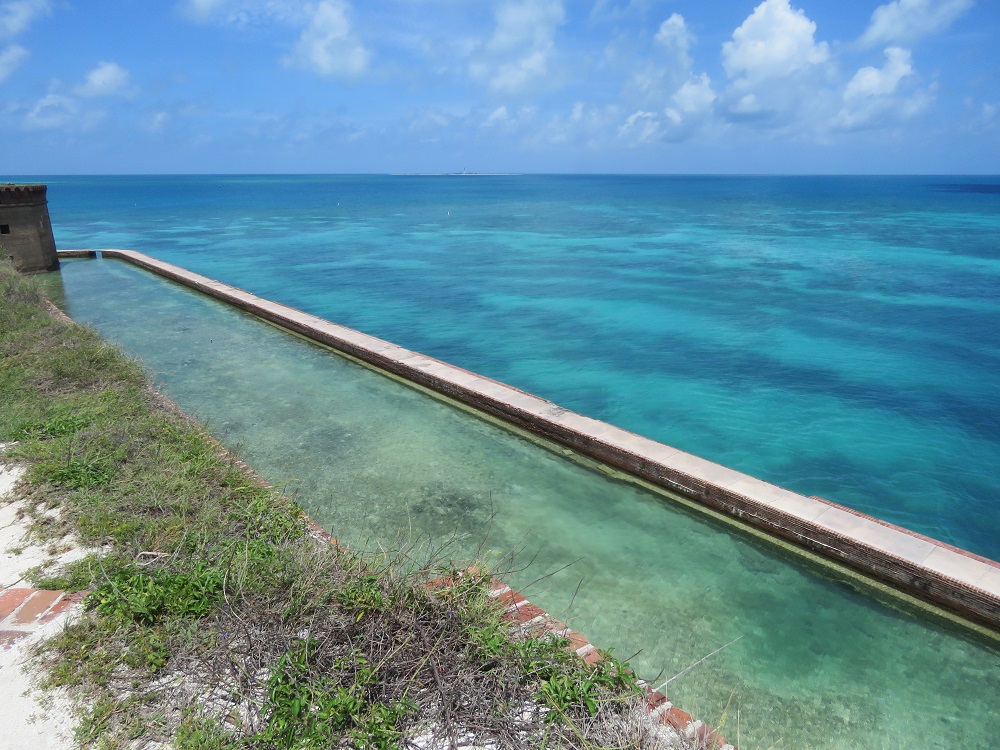 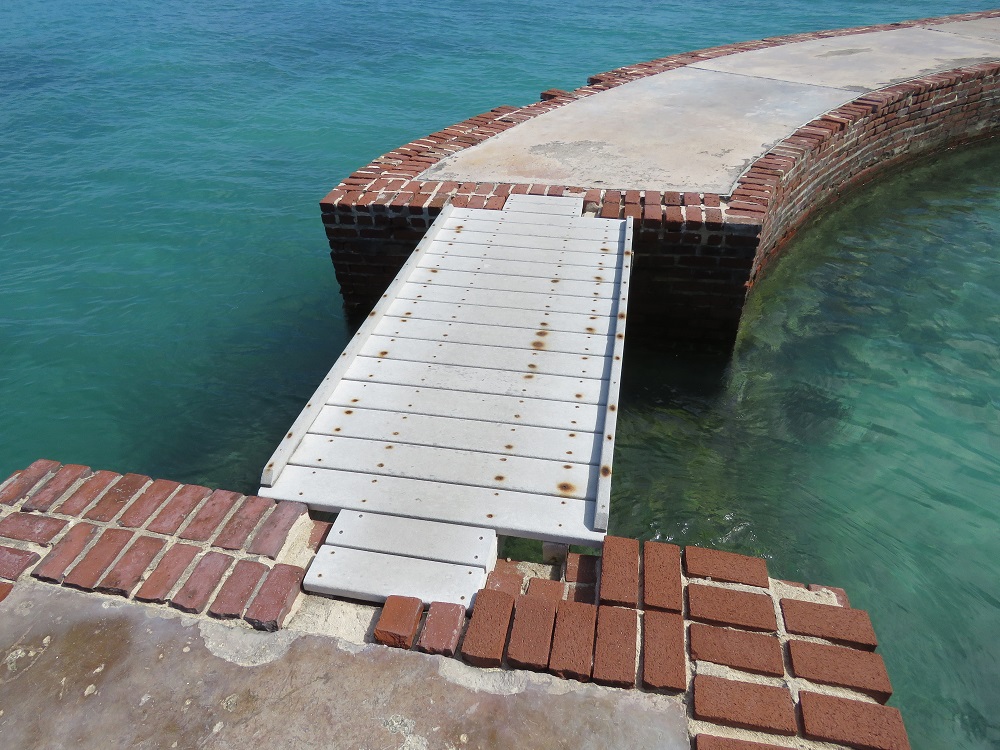 A 70 foot wide moat circles the fort, serving as a barrier to any attackers and a breakwater against waves and storms. Park visitors can walk on the moat wall around much of Fort Jefferson. 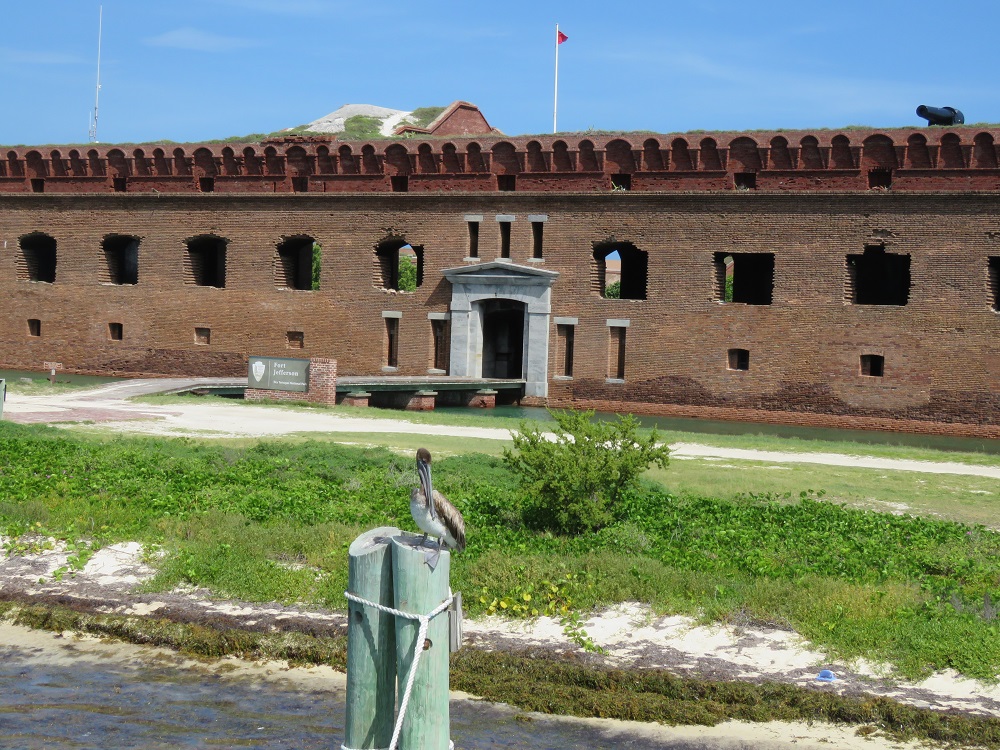 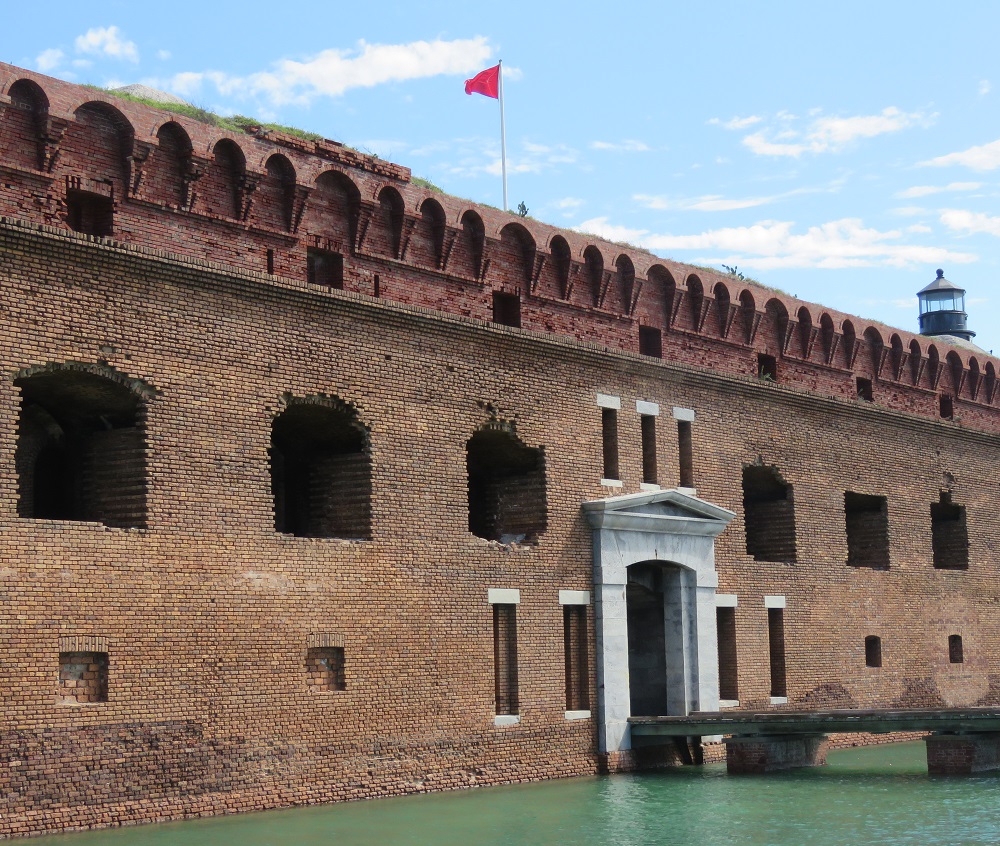 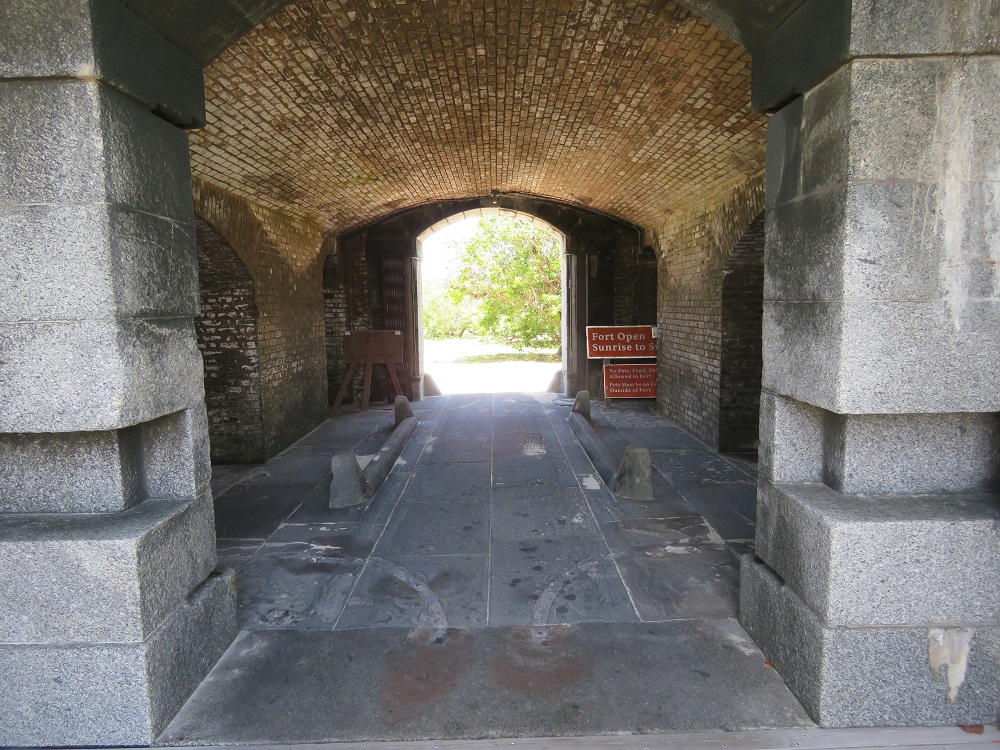 A bridge across the moat near the Yankee Freedom dock provides access to Fort Jefferson. In the past, it was protected by a drawbridge and heavy doors. If the outer door was breached, the attackers would be trapped by the interior door. 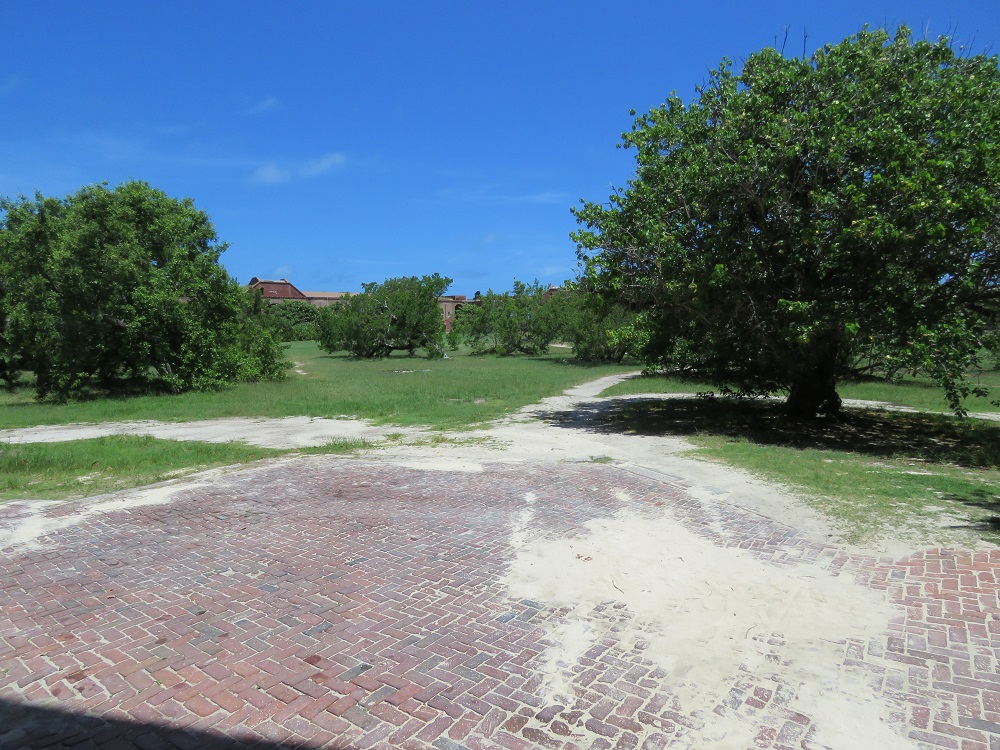 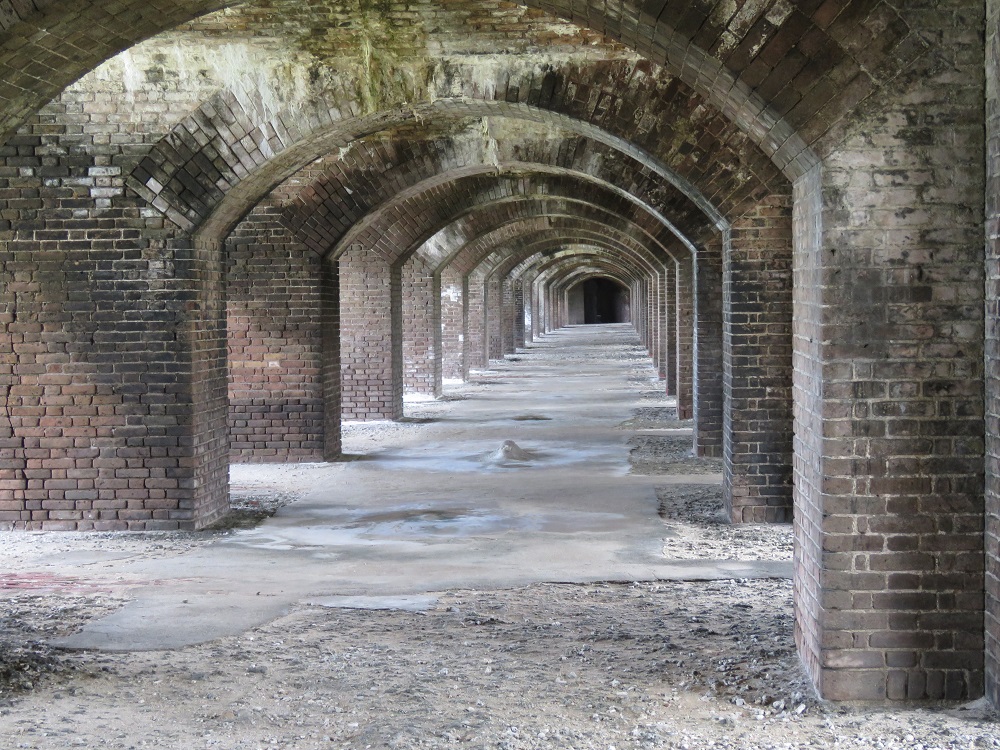 Fort Jefferson has stairs which provide access to certain sections of the interior walls as well as the roof. The roof provides a great view of both the surrounding area (Bush Key, Loggerhead Key) as well as the parade grounds. 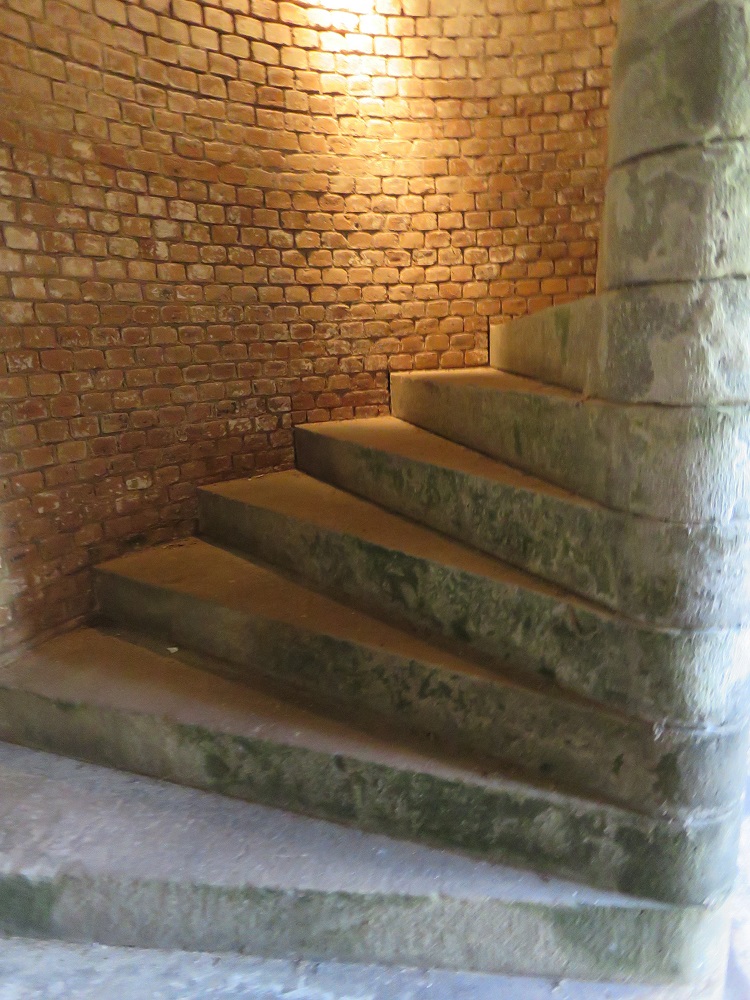 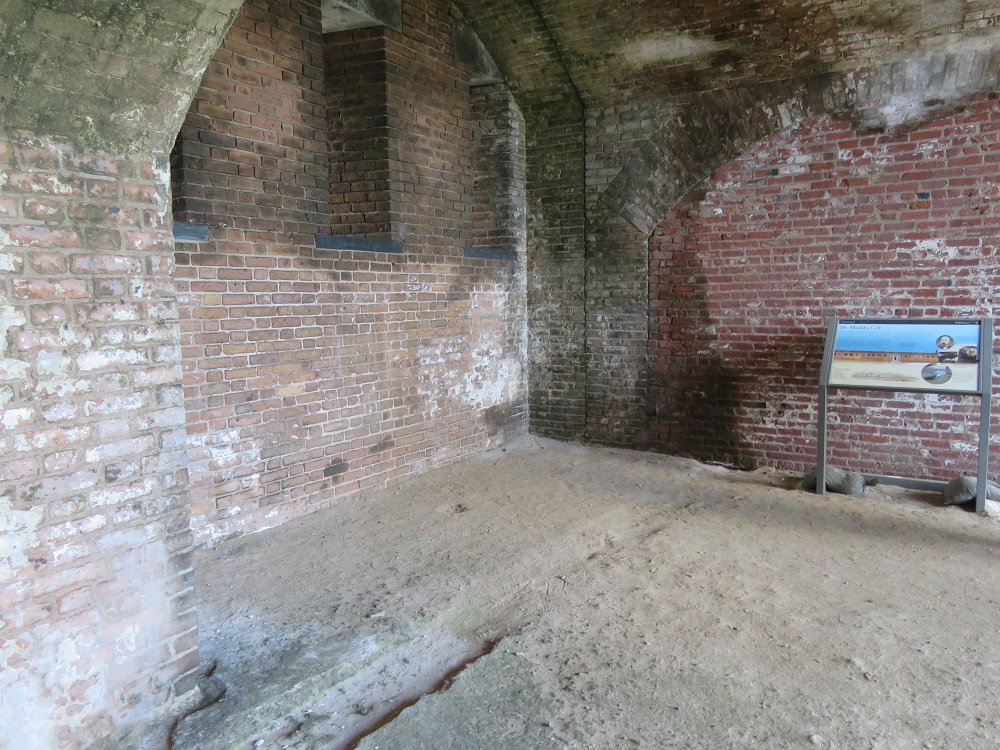 Dr. Samuel A. Mudd arrived at the fort’s prison in July 1865 and was pardoned by President Andrew Johnson in 1869. Mudd was a physician visited by John Wilkes Booth for surgery on his leg following the assassination of President Abraham Lincoln. A military commission found him guilty of aiding and conspiring in murder and sentenced him to life imprisonment. 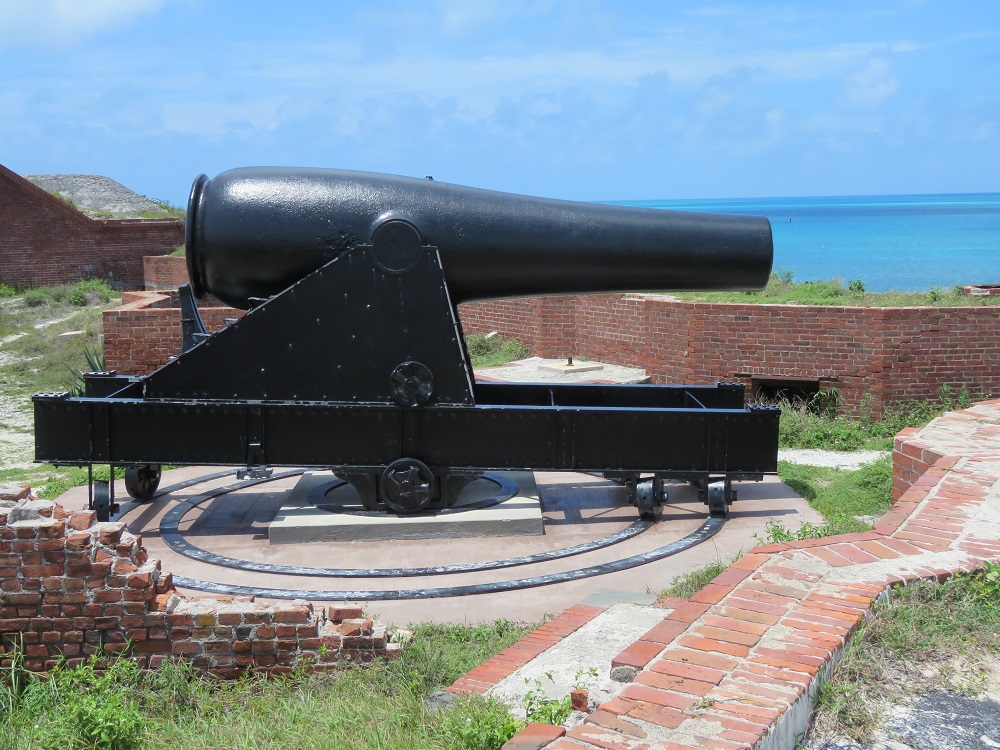 10 cannons remain from the 141 guns listed at the fort when the garrison left in 1874. The cannon pictured above is a 15-inch Rodman, which could fire a cannonball three miles in any direction as they were sitting on a carriage which could be rotated 360 degrees. 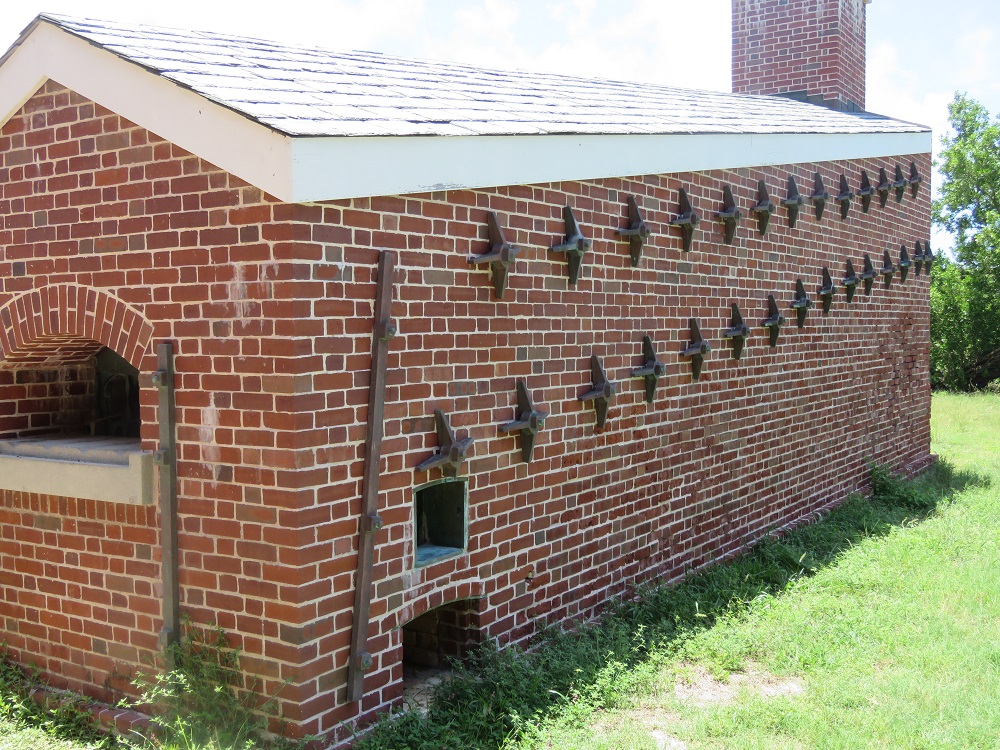 The cannonballs were heated in a furnace so that they would set wooden ships on fire upon impact. The furnace were eventually rendered obsolete by ironclad ships and explosive shot. 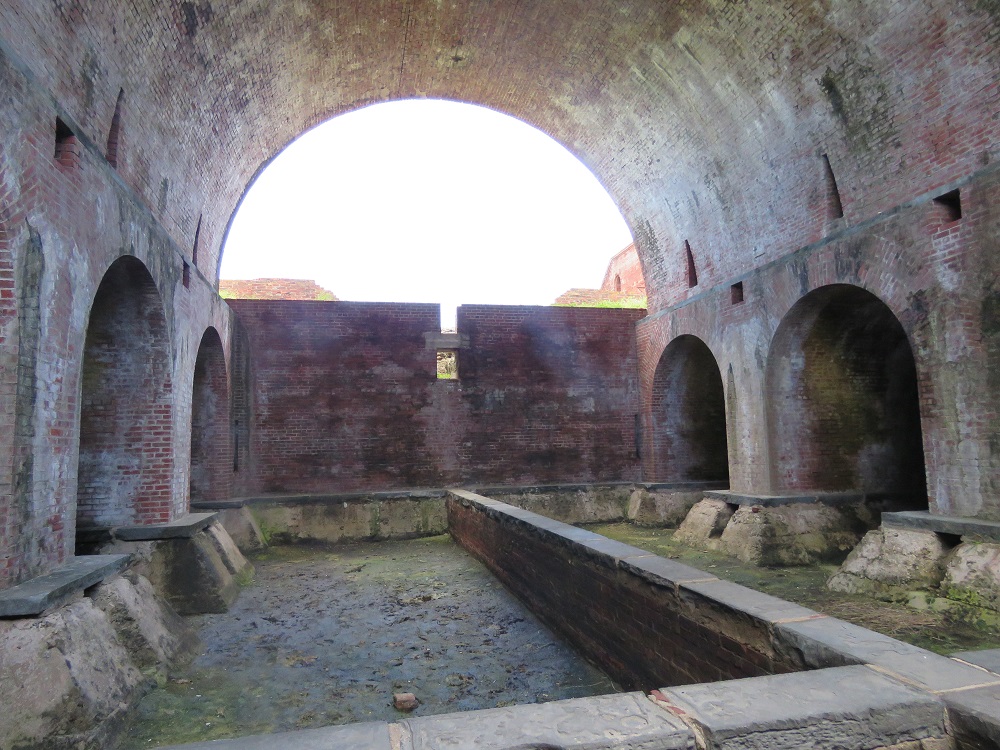 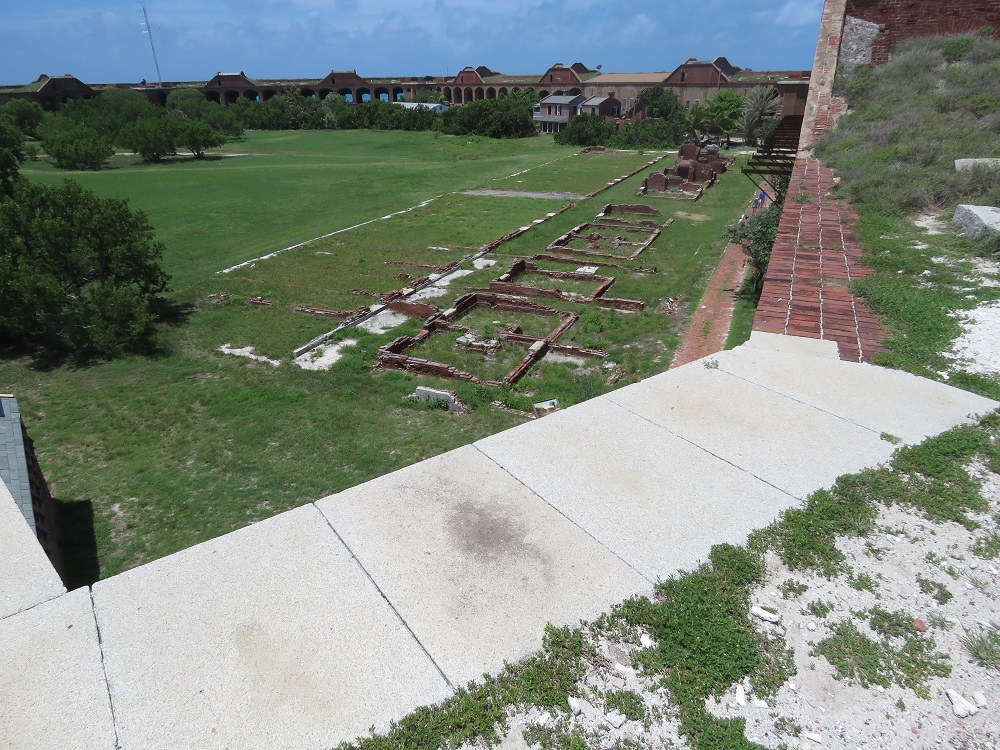 The foundation of the officers’ quarters is still visible, which at one time was a three-story, 68 room building built in 1948 and expanded in 1863. A fire destroyed the building in 1927 and the ruins were removed in the 1960s. A few other buildings remain (below). 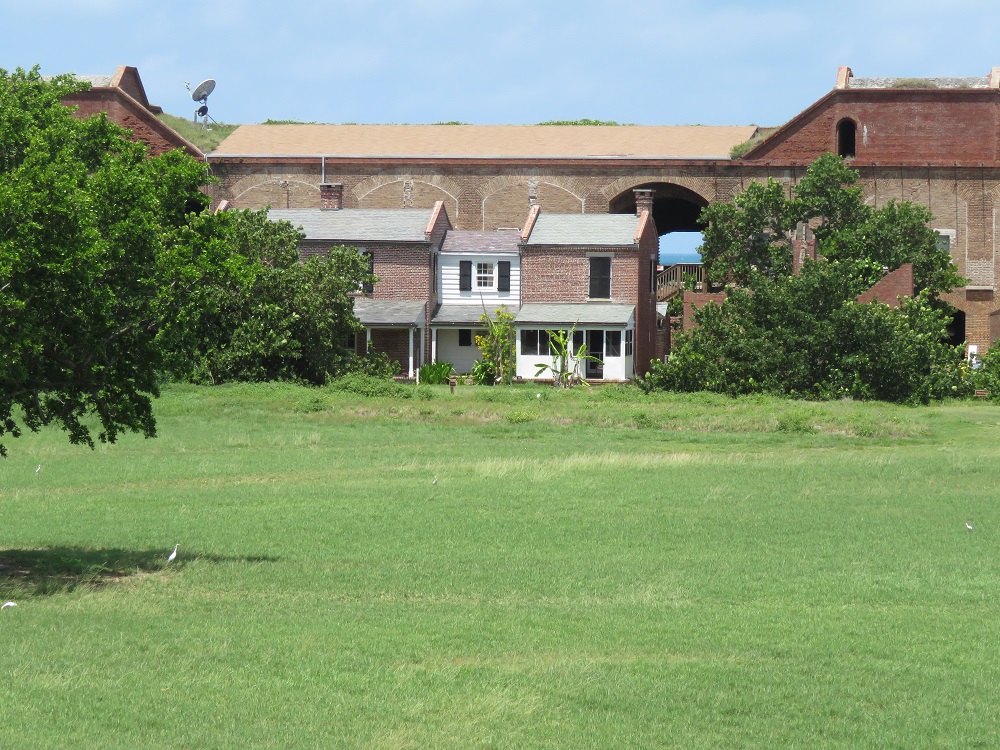