White Sands National Park in New Mexico is known for its rare white gypsum sand dunes of the northern Chihuahuan Desert. It contains the largest gypsum dune field on Earth. After more than 80 years as White Sands National Monument, Congress authorized its redesignation to a national park at the end of 2019. 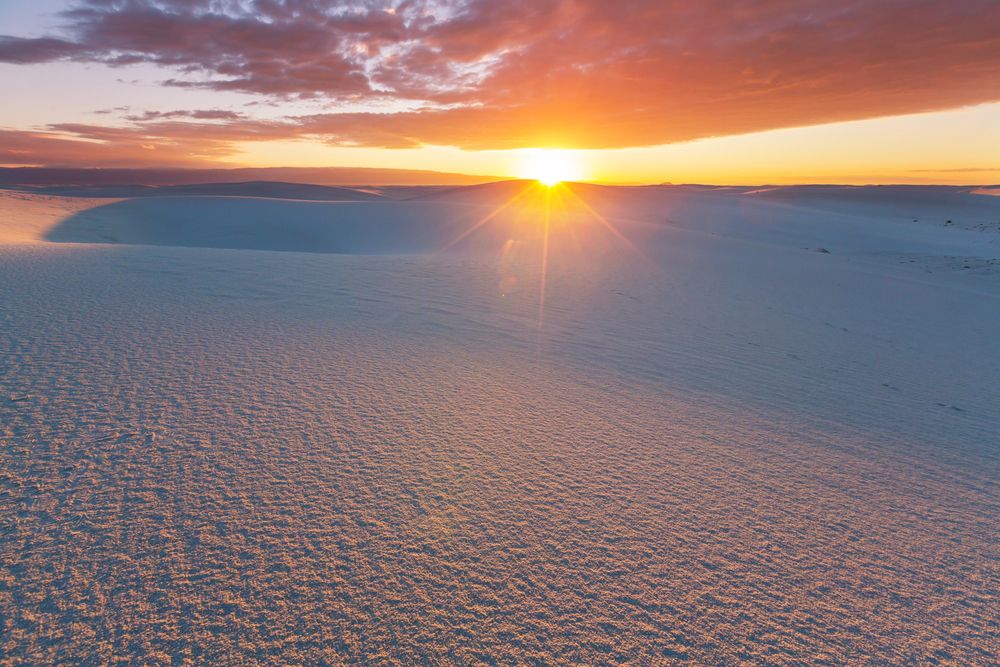 The gypsum was left behind by shallow seas that covered the area during the Permian Period, a geologic period which started about 298 million years ago and ran for 47 million years. Tectonic activity lifted the seabed containing gypsum to form the area’s mountains, and then rain then dissolved the gypsum and carried it into a basin which contained a lake (Lake Otero) during the last ice age. After the lake dried out, the selenite crystals (crystalline form of gypsum) were exposed to weathering and erosion that eventually breaks them into sand-size grains.

White Sands was made a national park in 2019 after 85 years as a national monument. White Sands National Monument was designated by President Herbert Hoover in 1933 under the authority of the Antiquities Act of 1906. The park was dedicated as a national monument in April 1934. It was redesignated as White Sands National Park in 2019 when Congress passed and the President signed the National Defense Authorization Act for Fiscal Year 2020. The bill also added 4,855 acres to the park.

The White Sands Visitor Center is located immediately off US-70. It is a historic visitor center constructed in the 1930s in the Spanish Pueblo Revival architecture style. The visitor center is located at the start of Dunes Drive, which is an eight mile scenic drive (16 mile round trip) that goes into the heart of the dunes and takes approximately 45 minutes. The first five miles are paved and the last three miles are hard-packed gypsum sand.

There is no frontcountry campground at White Sands. There are only primitive backcountry campsites. Campgrounds and RV parks are available in Alamogodro. The closest publicly operated campground is located at Oliver Lee State Park.

White Sands is the second national park in New Mexico. Carlsbad Caverns National Park is located a three-plus hour drive southeast of White Sands and was designated by Congress in 1930.