Cadillac Mountain is the first place in the United States to view the sunrise for five months during fall and winter every year. The mountain is accessible by car 24 hours a day from Acadia National Park’s access road, except during winter when the Summit Road is closed along with most of the Park Loop Road.

Why do they call it Cadillac Mountain?

Cadillac Mountain was originally called Green Mountain. The superintendent of Acadia National Park (when it was called Lafayette) decided the area’s landmarks needed more colorful names. As a result, in 1918, the name of the mountain was changed to honor French explorer Antoine Laumet de La Mothe, sieur de Cadillac. He adopted the “sieur de Cadillac” title upon arrival in North America where he received land including the island of Mount Desert. He was also the inspiration for the name of one of the oldest automobile brands in the world, Cadillac, as well as city of Cadillac, Michigan.

We made the sunrise drive up to the top of Cadillac Mountain twice while we were there. It is a short but very windy 3.5 mile trip up the mountain. The park ranger at Blackwoods Campground recommended that we attempt to arrive about thirty minutes ahead of the expected sunrise in order to ensure that we got parking there. It can be a bit limited on busy days, and sunrise can be one of the busiest times regardless of the hour. On Sunday of Columbus Day weekend, the early arrival was definitely necessary. Even the fog did not stop everyone from turning out. Monday was a bit better, but I wouldn’t risk it unless you want to walk up in the dark from the lower level of parking. 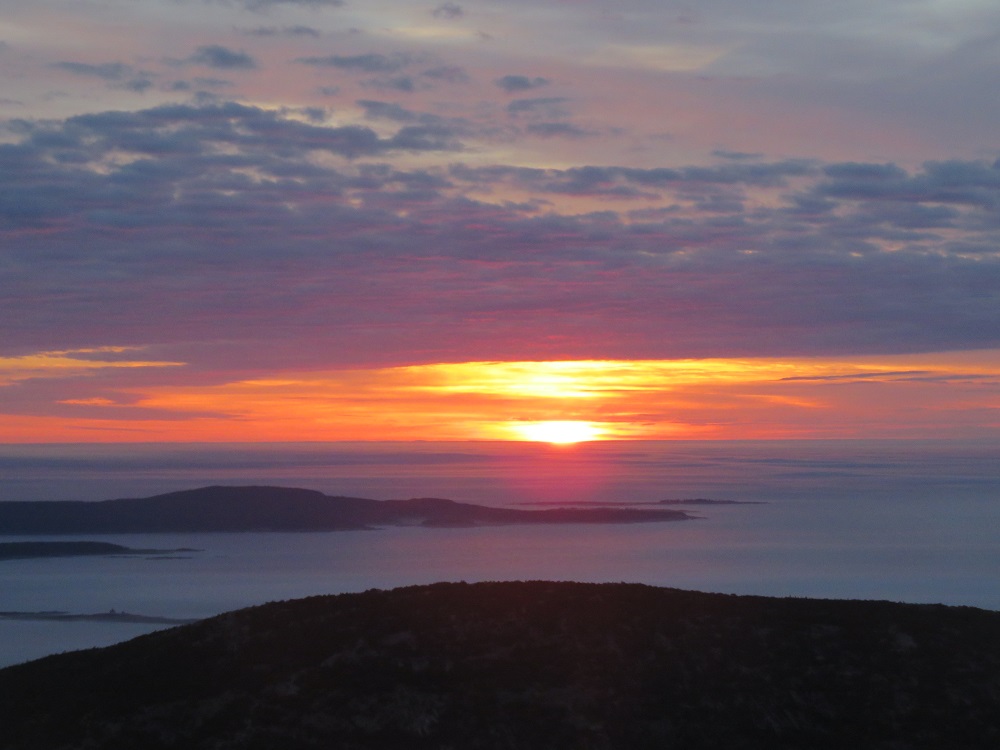 This is a more popular activity than you would expect. We saw people hiking up the mountain for the sunrise both mornings when we were in Acadia National Park. If you are going to attempt it, be sure to bring flashlights. How long does it take to climb Cadillac Mountain? It takes two to four hours to hike up to the summit depending on your route and fitness level. If you are making the trip in the dark to see the sunrise, please add additional time or you may end up watching the sun rise from the side of the mountain rather than the summit.

We weren’t able to see the sunset from Cadillac Mountain during our trip between the weather (clouds/rain) and our own busy schedule. However, here is a photo of the sunset taken from Blue Hill Overlook: 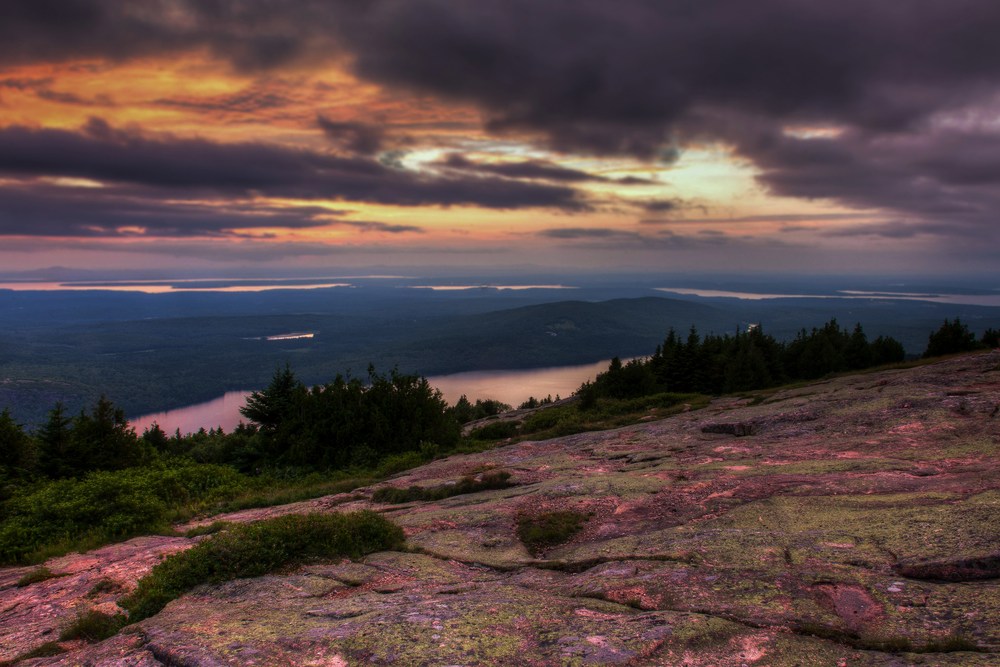 Blue Hill Overlook is the south-facing lookout from Cadillac Mountain just short of the summit which is perfect for watching the sunset over Eagle Lake. The parking lot is a left hand turn (on your way up the mountain) shortly before reaching the summit’s parking lot. We recommend getting there early if you have your heart set on the best view because the parking lot will fill up.

The view from Blue Hill Overlook toward the southwest during the day: 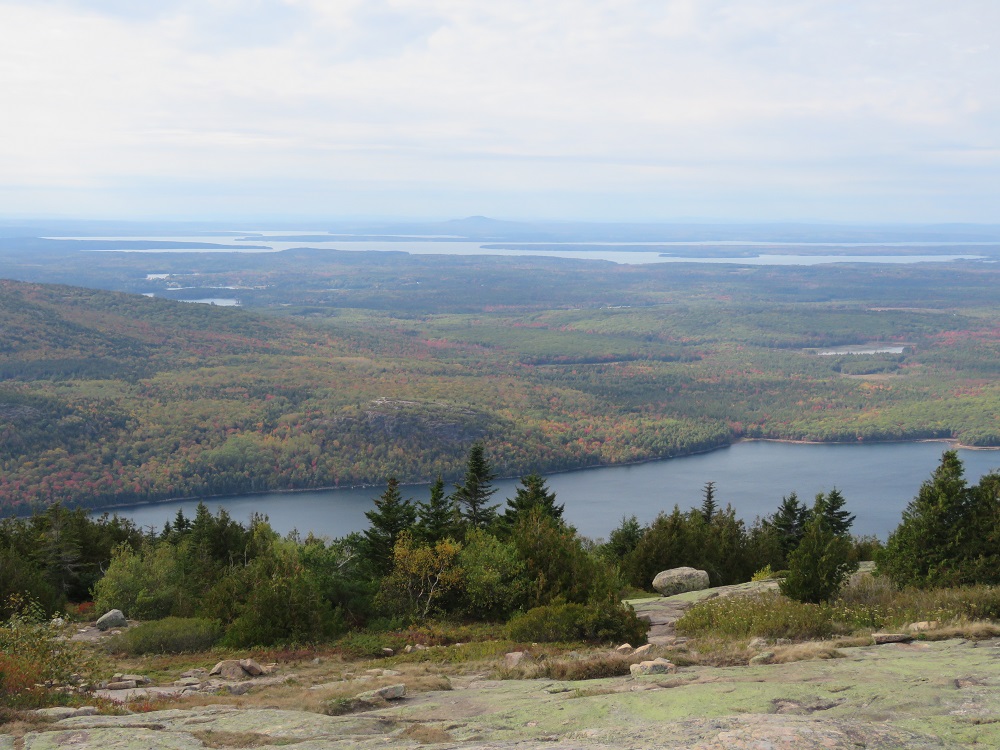 The view from Blue Hill Overlook toward the southeast during the day: 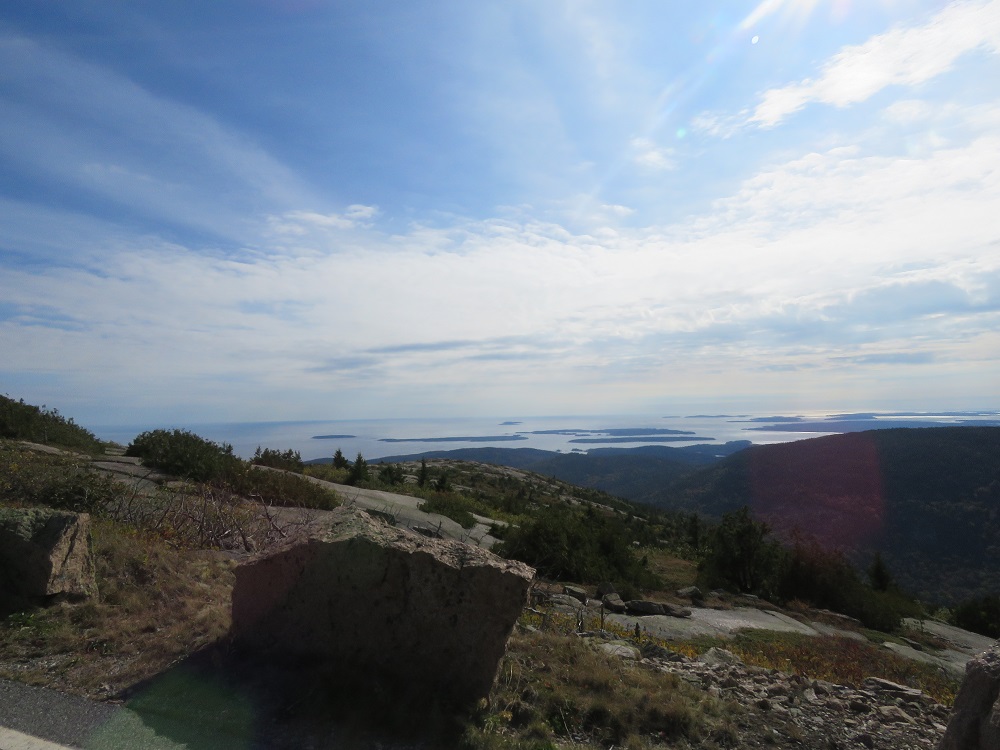 Bar Harbor is visible from Cadillac Mountain’s summit (when there is not fog). The city is northeast of the summit. 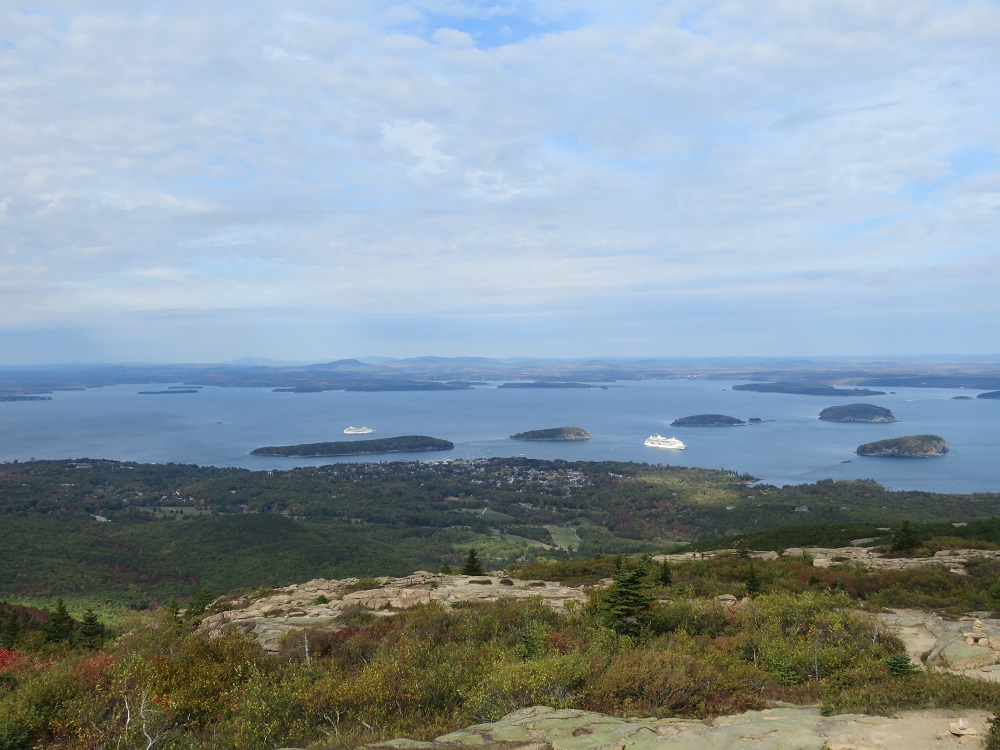 We’re working on tracking down a good map of the area.

Bathrooms, snacks, drinks and souvenirs are available at the Eco Store on top of Cadillac Mountain. They are open seasonally beginning in May. Hours are approximately 8 AM until sunset. The bathrooms are accessible outside the store so they were available for us following the 6 AM sunrise even though the store was not open.

This narrow gauge mountain railway was built in 1883 and used two steam locomotives (the second added in 1884) to take tourists in the summer to the top of Green Mountain, as Cadillac Mountain was known at the time. The rail had a vertical ascent of around 1,258 feet from Eagle Lake to the summit. The plan was created by Frank Clergue, a Bangor lawyer, who raised $90,000 in capital for it in 1882. They charged $1.75 for one-way passage and $2.50 for the round trip. The train made four trips a day across the 1.2 mile long track, with it taking less than 30 minutes to reach the top. It was modeled on the successful Mount Washington Cog Railway in New Hampshire, which was the world’s first rack-and-pinion (“cog”) mountain railroad built in 1868. The Green Mountain Cog Railway ceased operations in the early 1890s after the number of riders declined. In 1888, the Green Mountain Carriage Road Company created a toll road up the mountain which introduced competition for the railway.

The Mountain House built in 1866 by Daniel Brewer was the first hotel on Cadillac Mountain. The railway built a second hotel in 1883, called the Green Mountain House. They both burned to the ground in the early 1880s. The railway replaced its hotel with the Summit House. After the railway closed, the Summit House continued operating until the mid-1890s, when it was closed following a police raid for the sale of illegal liquor in violation of Maine’s prohibition law. Portions of the structure were taken down and the remaining shell was eventually burned.

Since Cadillac Mountain is open all night, it makes a good place to see the stars. Every year, the Acadia Night Sky Festival is held in early September to enjoy the dark sky of Maine. A Star Party has been held on top of Cadillac Mountain during the festival in the past.