Sand Beach is one of the two beaches in Acadia National Park with lifeguards from Memorial Day until Labor Day, and it is the closest parking area to the popular Beehive Trail, where hikers look down from Beehive Mountain on the surrounding area. Despite its name, the standard ocean temperature of 55 degrees means that only 10 percent of the visitors actually don a bathing suit and plunge into the water here. Nevertheless, it is still a popular destination along Park Loop Road in Acadia. 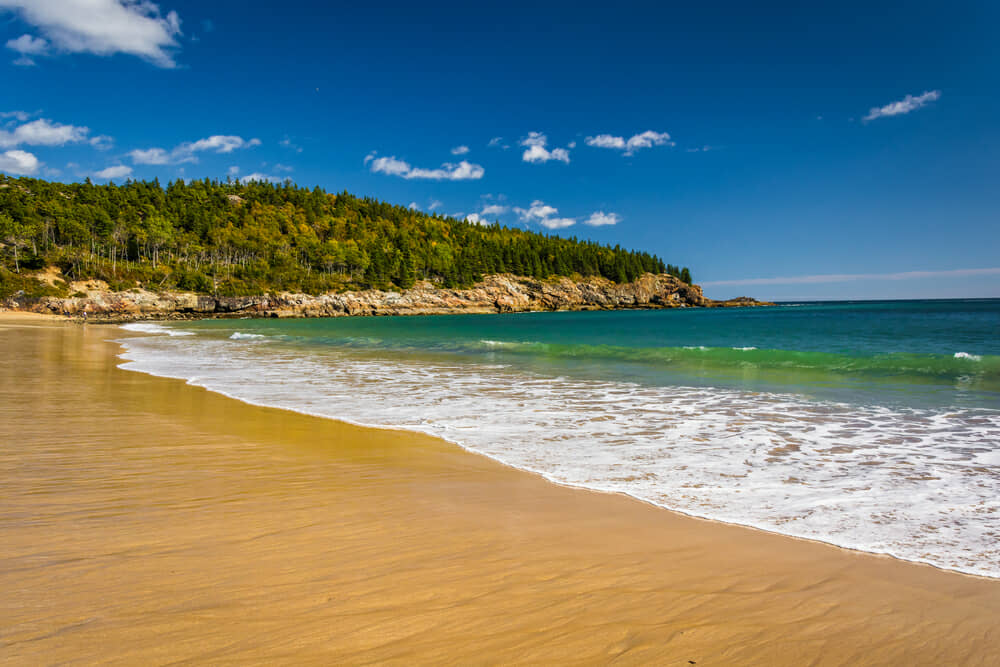 Here is an aerial view of Sand Beach and Acadia National Park’s surrounding area. Great Head Peninsula is on the right. You can see the parking area on the left. 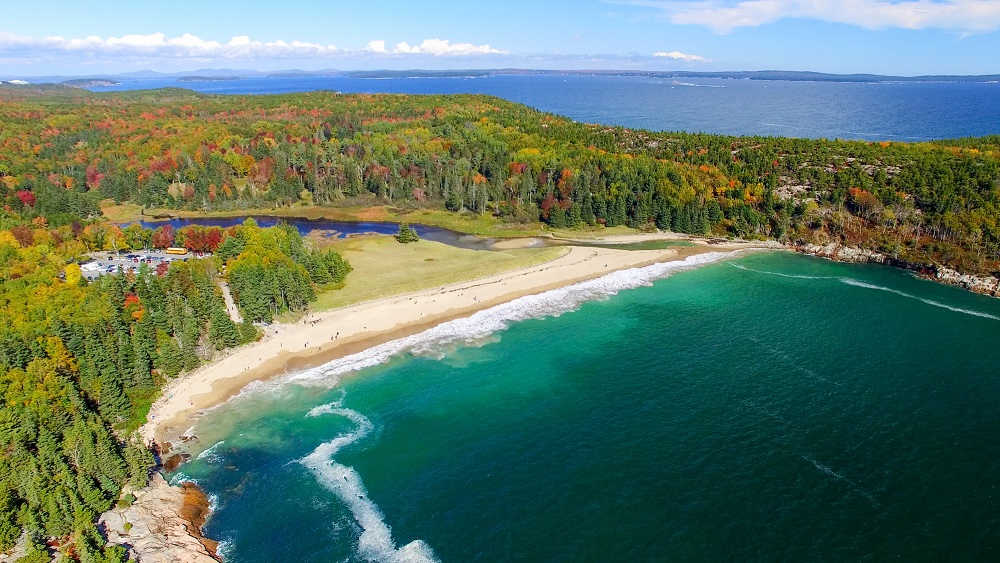 Sand Beach is the only sandy beach along Acadia’s rocky shoreline. It is also one of the few cold-water shell-based sand beaches in the world. As much as 70% of the sand is broken shells of mussels, sea urchins, barnacles and periwinkles. The waves and tides crush the shells and create the colorful sand. This differs from most of Maine’s shoreline, which is composed of hard granite that erodes slowly.

The Acadia Sand Beach is a pocket beach, which is a beach located between two headlands. The pocket that is Newport Cove was formed by a glacier. Normally, there is very little exchange between the outside ocean and a pocket beach. However, a strong current flows into the beach area here to collect shells, and there is also a great variance between the water levels at low and high tide. The cold water of the Atlantic Ocean collects and traps gases that ordinarily dissolves the shells, but the shells in the cove do not dissolve completely. The current is diverted into the pocket beach here by Old Soaker, a large granite rock in the Atlantic Ocean: 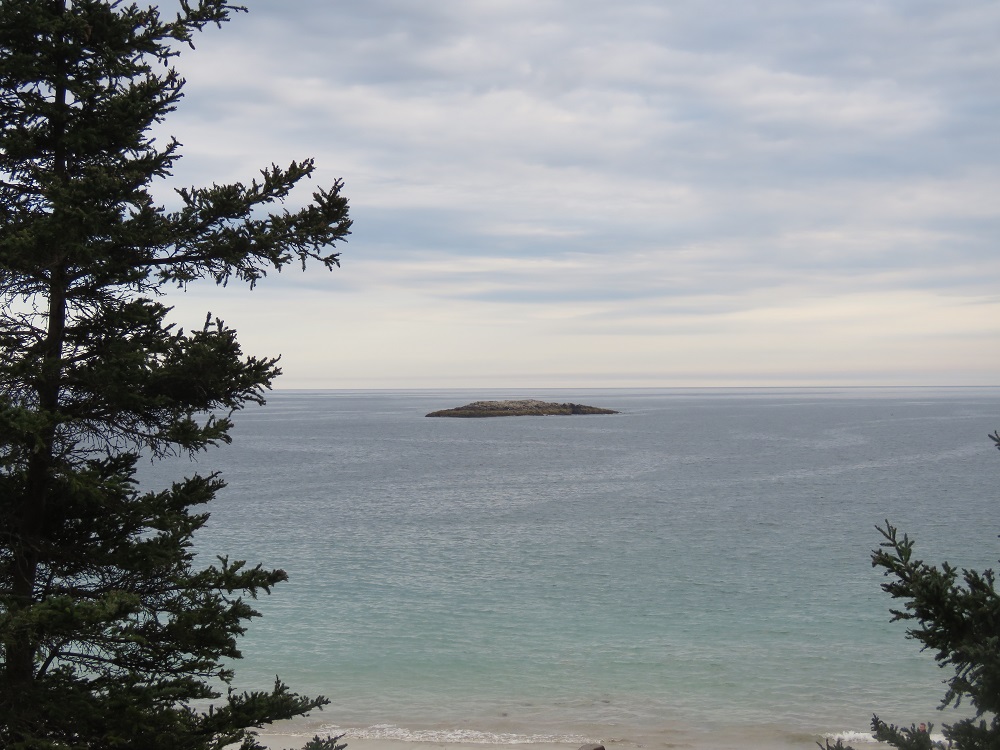 You can see all of the broken shells in this close up of the sand that we took in the area: 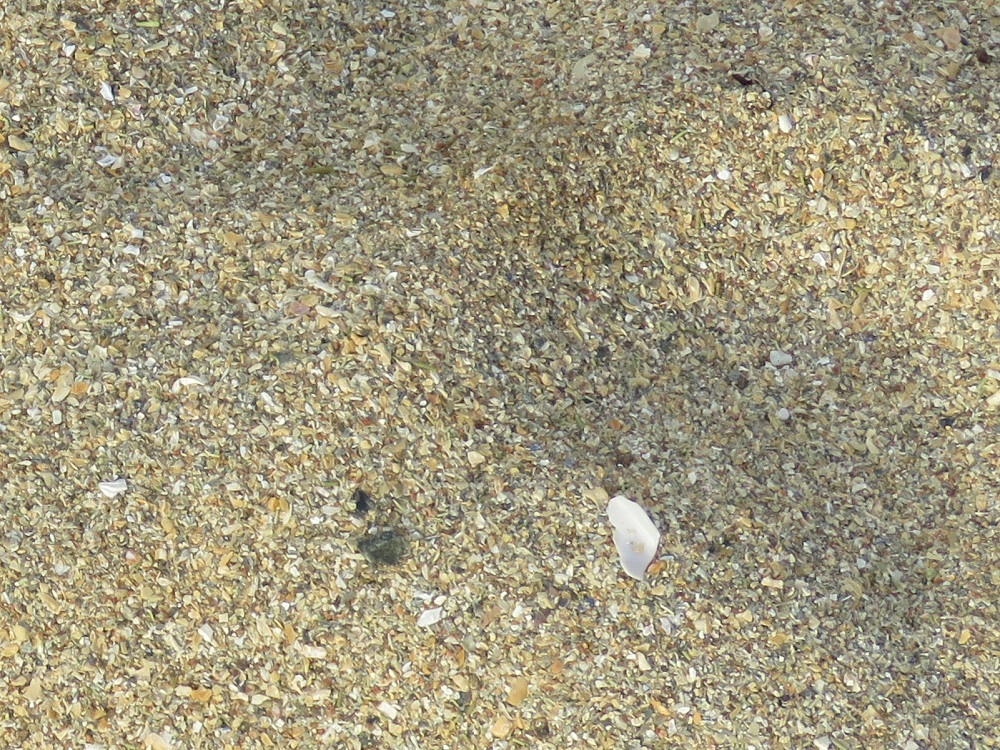 Sand Beach and Great Head were part of 100 acres acquired by the Satterlee family in 1910 and donated to Acadia National Park in 1949 by Eleanor Morgan Satterlee in honor of her mother Louisa P. Satterlee. Louisa was the oldest daughter of American financier J.P. Morgan, and the land was purchased by him for her as a gift. The Satterlee family had a home, a teahouse and a boat house here, but the MDI Fire of 1947 swept through the area destroying much of it.

We visited Sand Beach in October 2017 on a beautiful fall day. The parking lot was busy but not completely packed. There were plenty of people hanging around checking out the beach and the area, though there was a great deal of space there so we managed to never feel like we were on top of other people.

Sand Beach is located on Park Loop Road shortly after the entrance station where they check for your annual pass or require you to pay the entrance fee. It is across the street from The Beehive. The next stop after Sand Beach is Thunder Hole. You can see the location on the below map: 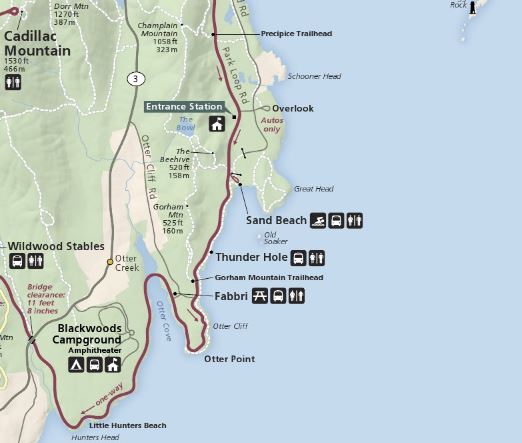 If you want to go swimming here, the national park service website indicates that they have lifeguards staffed here during the summer. However, when we were here for Columbus Day weekend (October), there were no lifeguards and we did not see anyone swimming. We did dip our toes in the water, which was fun. Be careful as there are strong currents in the area.

The other beach on Mount Desert Island is Echo Lake Beach. Because it is a freshwater lake and not the ocean, the water is warmer (up to 70 degrees in the summer) in Echo Lake. A higher percentage of people that are there will enter the water.

Here is a map of the Sand Beach Acadia area: 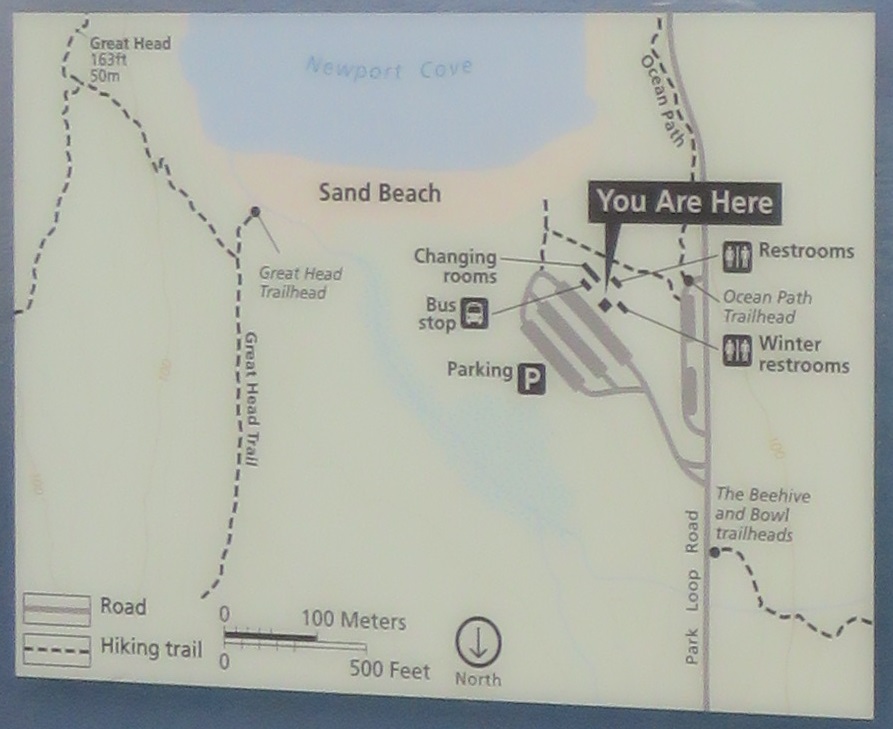 Trails in the area include the Bowl, the Beehive, the Great Head, and Ocean Path. While we were at Sand Beach, we saw first hand the popularity of The Beehive. The start of The Beehive trail is across the street from the parking lot for Sand Beach and the mountain top can be easily seen from Sand Beach.

Great Head Trail is another option in the area for those that are afraid of heights. It is a moderate 1.5 mile loop which takes hikers to the Great Head peninsula. Great Head is composed of granite and has an elevation of 144 feet, the highest cliff in the United States on the Atlantic Ocean.

The Beehive Mountain rises 520 feet above the ocean. It provides a beautiful view of the Atlantic Ocean, the islands surrounding the area, and Sand Beach. 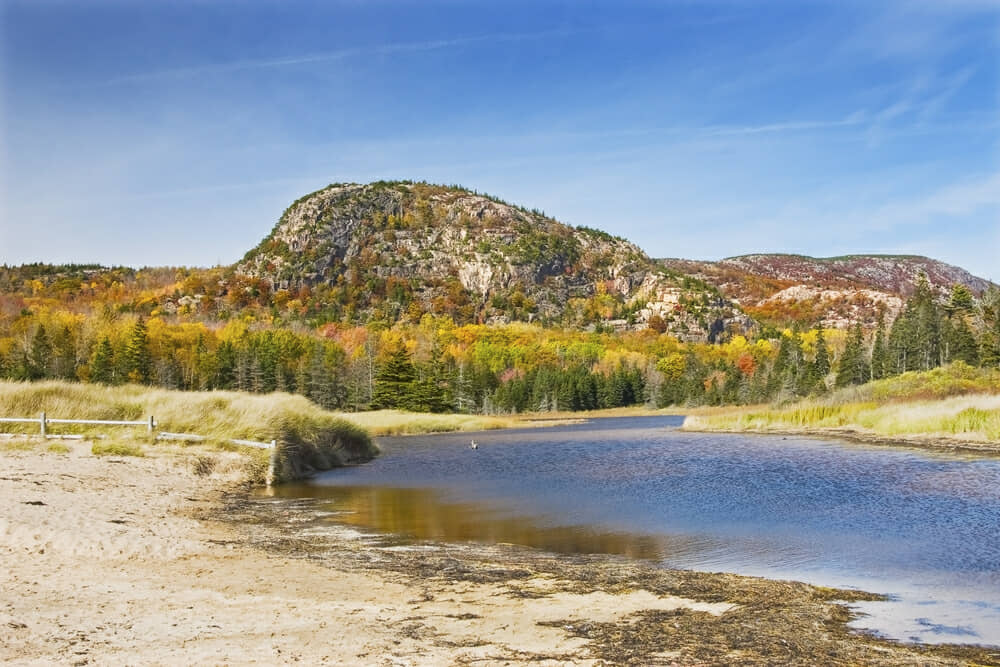 This is one of the most famous ascents in Acadia National Park. It is a strenuous 1.6 mile rocky trail with sheer cliffs and ladders. It ascends the front face of the mountain. When you reach the top, The Beehive offers sweeping views of the area and ocean. The return trip occurs on the Bowl Trail because descending The Beehive is dangerous and not advised.

We didn’t have time to traverse the Beehive Trail due to the weather and a slight fear of heights. But we’re excited to tackle this one our next time in Acadia National Park.

This is the view of Sand Beach that awaits those who climb to the top of Beehive Mountain: 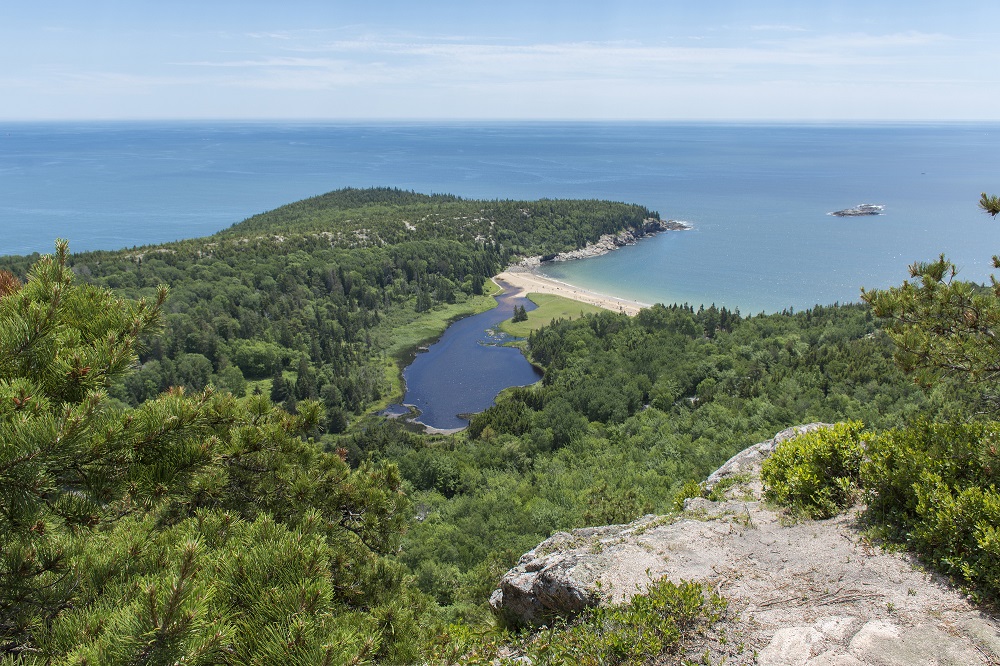 Where do you park for the Beehive Trail?

There are two options for parking. One is to park at the parking lot for Sand Beach. The other option is to park at a different location (such as the visitor center) and take the Island Explorer shuttle. During busy times of the year, the shuttle may be a better option as parking lots do fill up.

We only found one report on the internet of a death here, over twenty years ago. Nevertheless, the trail should not be attempted by young children, those with a fear of heights, or anytime during wet weather. Also, do not climb down the iron rungs – they are one way only up.

We also saw a report of a death on the Beehive more than 40 years ago but the individual was described as free-climbing off the trail. So it obviously can happen, but does not appear to be a regular occurrence.

We looked into this after Google said that there had been six deaths on the trail here, but we could not verify that claim.

How hard is the Beehive Trail?

Alltrails labels it as moderate to difficult. Several others considered it strenuous and another called it challenging. The elevation change is about 500 feet in a short distance of around a half mile. There are iron rungs to climb, although not as many as some other “climbs” in the park.