Sixty percent of park visitors make a stop at Jordan Pond House and/or Jordan Pond during their time in Acadia National Park. The pond and house are named for the Jordan family of Seal Harbor who built a farmhouse near the pond in the 1800s.

This is the only true sit-down restaurant within Acadia National Park. It was founded in the early 1870s by Mr. Melvan Tibbetts. The original house dated back to 1847. In the 1940s, Mr. John D. Rockefeller, Jr. purchased the property and donated it to the National Park Service. The original House was destroyed in a fire in 1979 and a new Jordan Pond House was built in 1982 with funds raised by the Island Foundation. The property has been operated by Dawnland since 2013. 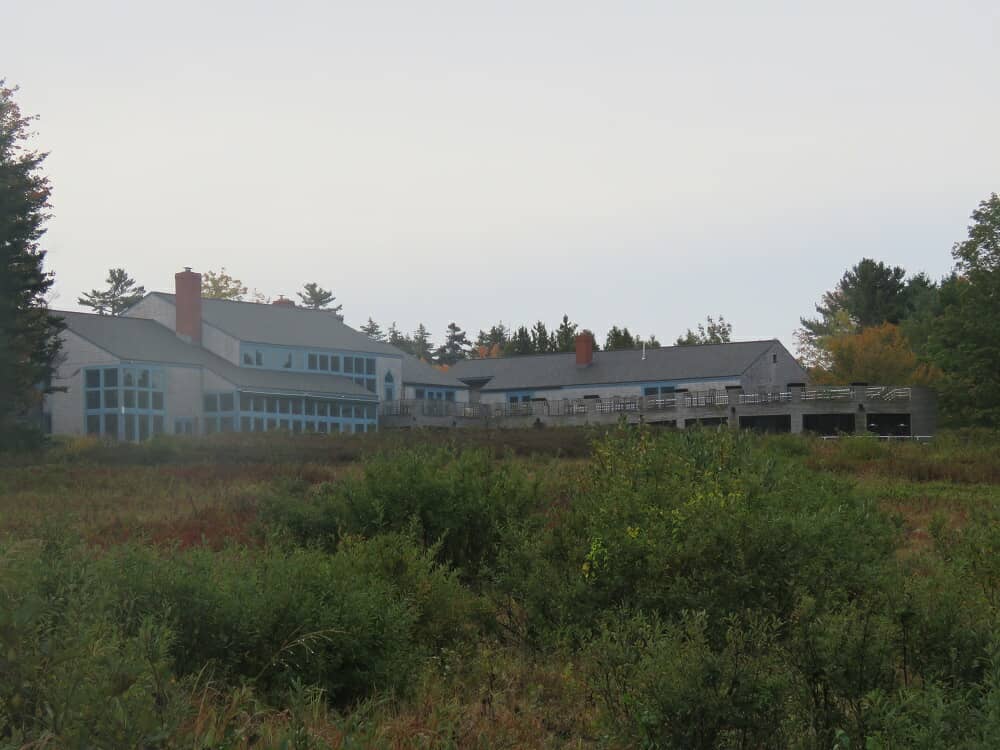 Jordan Pond House is best known for serving tea and popovers on the enclosed veranda and lawn overlooking the pond. Reservations are recommended for lunch and dinner, which is served from mid-May through late October. There are also public bathrooms and a souvenir gift shop in the building.

The restaurant was not yet open when we first arrived there in the morning but they opened up the window to start taking reservations shortly after the photo below was taken. 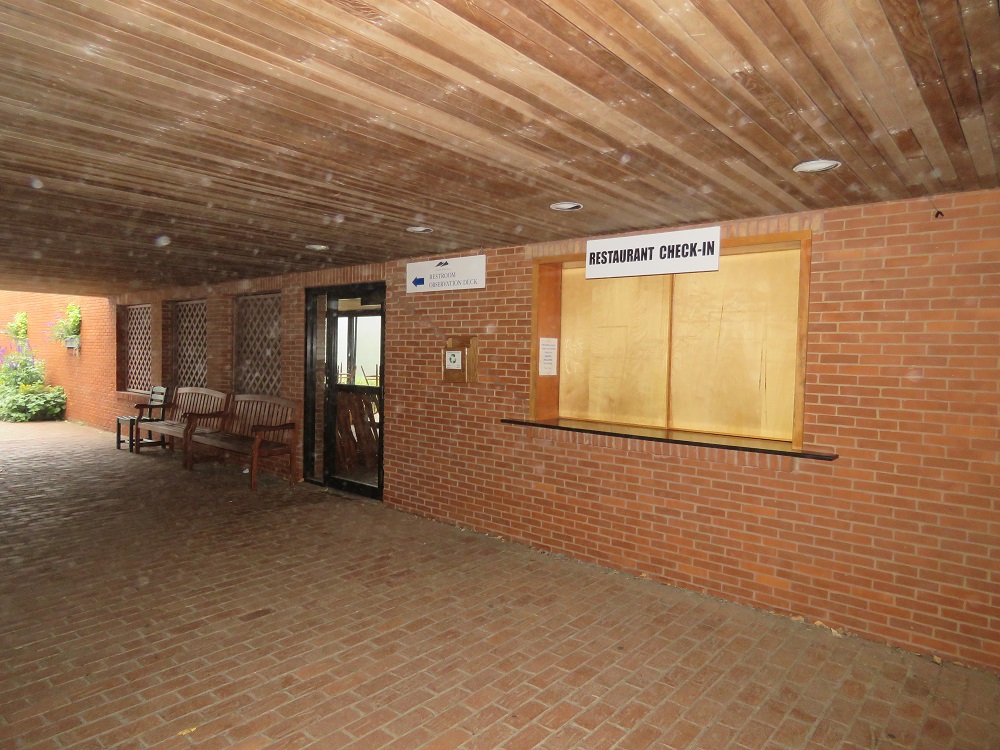 There is a large observation deck on the back of the house. 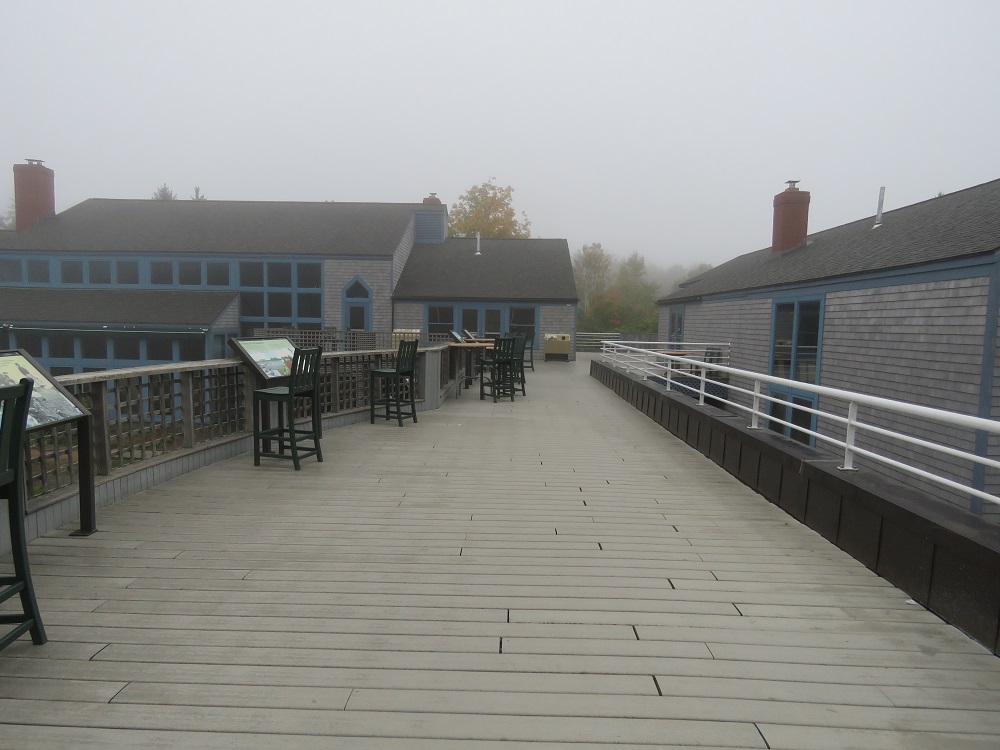 Jordan Pond is a 187 acre pond formed during the last glacial period by the Wisconsin Ice Sheet. It is bounded by the Penobscot Mountain and the Bubbles. To approach it for the first time, walk down past the lawn of the Jordan Pond House and enjoy the view across the lake of the Bubbles, two small mountains northeast of the pond. 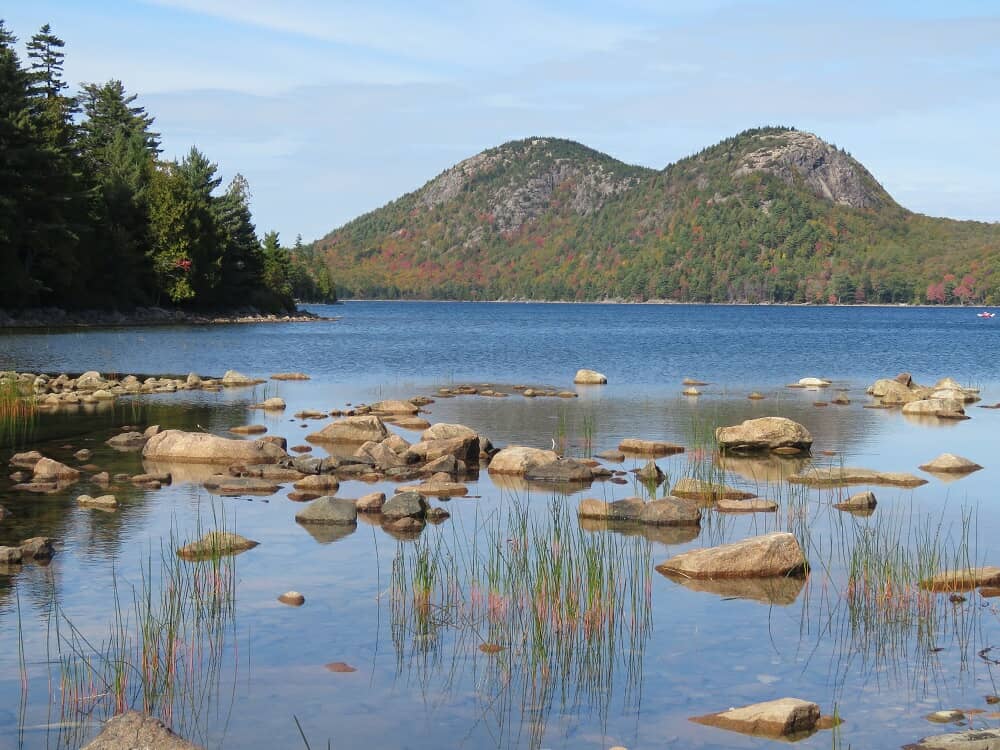 The clear water of the pond is legendary, with normal visibility of 46 feet and recorded visibility during certain times of 60 feet, the deepest in Maine. The maximum depth of Jordan Pond is 150 feet.

It is also a popular area for photography from the southern shore. When we were there, there were always photographers here taking pictures of the fall foliage across the water as well as the North and South Bubbles.

Non-motorized boats such as canoes and kayaks are permitted from the launch site reached by the Jordan Pond North parking lot. There is a maximum 10 horsepower motor limit on the lake. The water is closed to pets, swimming, windsurfing, paddleboarding, oarboarding, and scuba diving.

Is the Jordan Pond House open?

The restaurant is normally open from late April through the end of October according to its website. The precise hours of operation depend on the month, with hours typically 11 AM to 9 PM or 11:30 AM to 8 PM.

The Jordan Pond House has a delayed opening in 2020 due to the park closure for coronavirus. The restaurant is expected to reopen in June according to its website.

Is the Jordan Pond House open in October?

In October 2019, the property was open through the last Sunday in October. Hours may vary late in the season.

Jordan Pond House is considered pet friendly as dogs are allowed to join you on the lawn at picnic tables or on the large porch.

John D. Rockefeller, Jr. purchased the property and donated it to the National Park Service. The restaurant is currently managed by Dawnland, which acquired the contract in 2013. The contract for its operation runs until 2025. Dawnland is a subsidiary of Ortega National Parks, which has operations at several national parks including running The Lodge at Mammoth Cave.

How do you get to Jordan Pond House?

The area is accessible by car (with two parking lots), Island Explorer bus, taxi, bike or via the carriage trails from the surrounding area. It is located in Acadia National Park between Seal Harbor and Cadillac Mountain southwest of Bar Harbor. 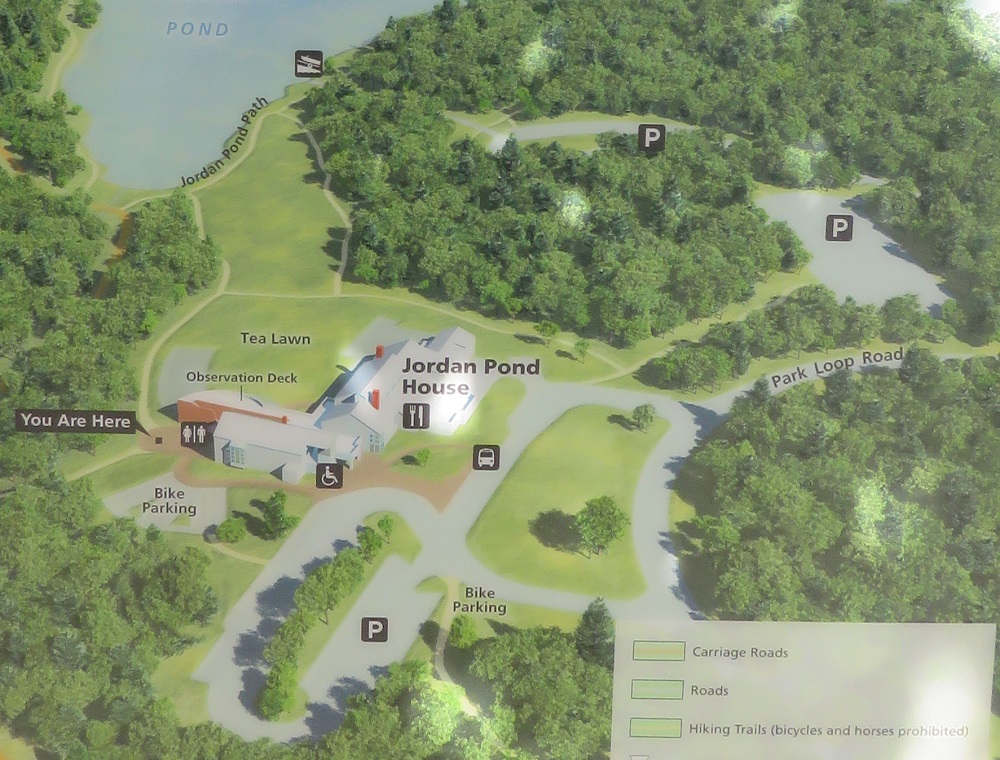 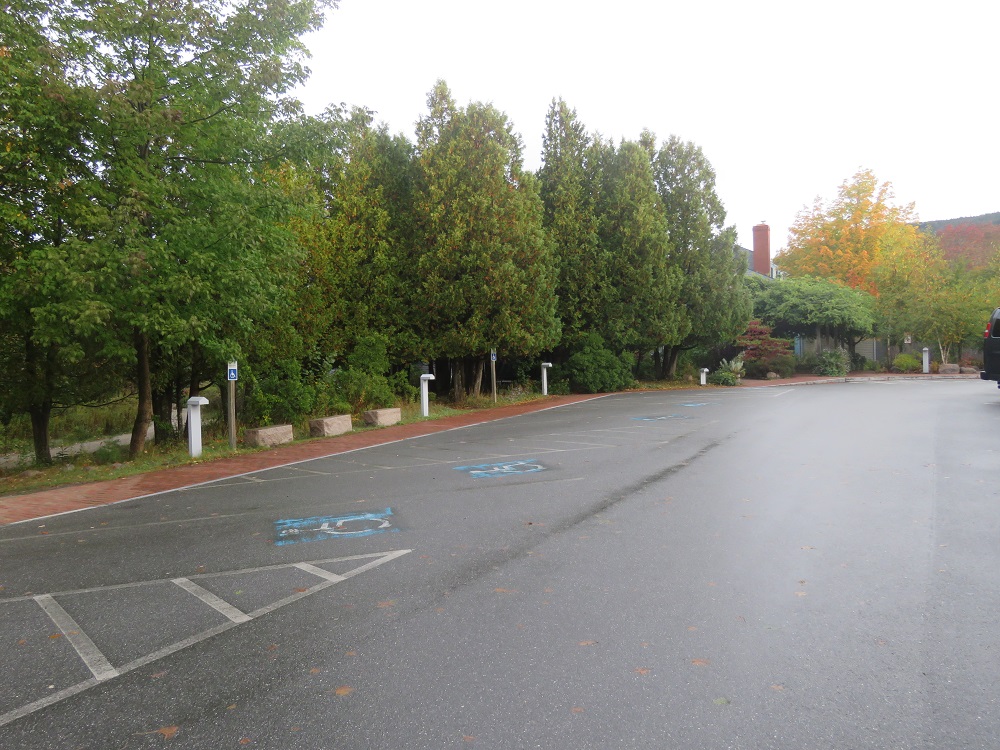 On our trip there over Columbus Day weekend, we were able to secure parking there in a reasonable amount of time in the morning, but our trip there during mid-day was thwarted due to a long line for parking in the North Lot that never seemed to move.

To avoid the parking situation at Jordan Pond, many people use the Island Explorer bus system to reach their destination. The Island Explorer buses, which normally run from late June through Columbus Day around Mount Desert Island, provide free public transportation around MDI with a stop at Jordan Pond House. Board a route 5 bus, which departs about every half hour, at either the Hulls Cove Visitor Center or Village Green in Bar Harbor. Please check to see if the buses are running, as they have been temporarily suspended indefinitely in 2020 due to social distancing.

Popovers have been served at the southern shore of Jordan Pond since Nellie McIntire began serving her famous popovers their in the 1890s. McIntire and her husband opened the tea house here.

Popovers are souffle-like rolls invented by Maine settlers. They are a variation on Yorkshire pudding, although they have evolved over the years to a point where it could be said that there is no relation (other than the ingredients). The New York Times over a decade ago disagreed however, calling them “beefless yorkshire puddings.” Yorkshire pudding is typically baked in the pan where beef has been roasted, where as popovers are baked individually in muffin tins or specially made popover pans. Popover pans are deeper and steeper than regular muffin tins, which forces the battter upwords yielding crispy sides and a puffy dome.

In 2018, Visit Acadia said that Jordan Pond House serves around 2500 of them every day during the peak season. The Jordan Pond House menu has options for a beverage and popovers if you are interested in breakfast or tea. Or you can add a Popover with Maine strawberry jam & butter to any entree for just $4.

A popover is one of the many foods of Maine which you must try when you are there, on par with a lobster roll and the whoopie pie. Having a lobster roll in Maine is like having a crab cake in Baltimore or a cheesesteak in Philly – a must for any visitor – despite the claim of Connecticut to the invention of a hot lobster roll (Maine lobster rolls are served with cold lobster meat). And the whoopie pie is the official state treat of Maine, although there is some controversy over whether it really started in Maine since other states like Pennsylvania lay claim to it as well.

From 1946 to 2013, the Jordan Pond House was run by the Acadia Corporation. Their popover recipe is now used at the Asticou Inn in Northeast Harbor.

Reservations are encouraged and can be made through their online reservation system or by calling the restaurant at (207) 276-3316. Their website indicates that the best time to go without a reservation is before 1130 AM or after 4 PM. 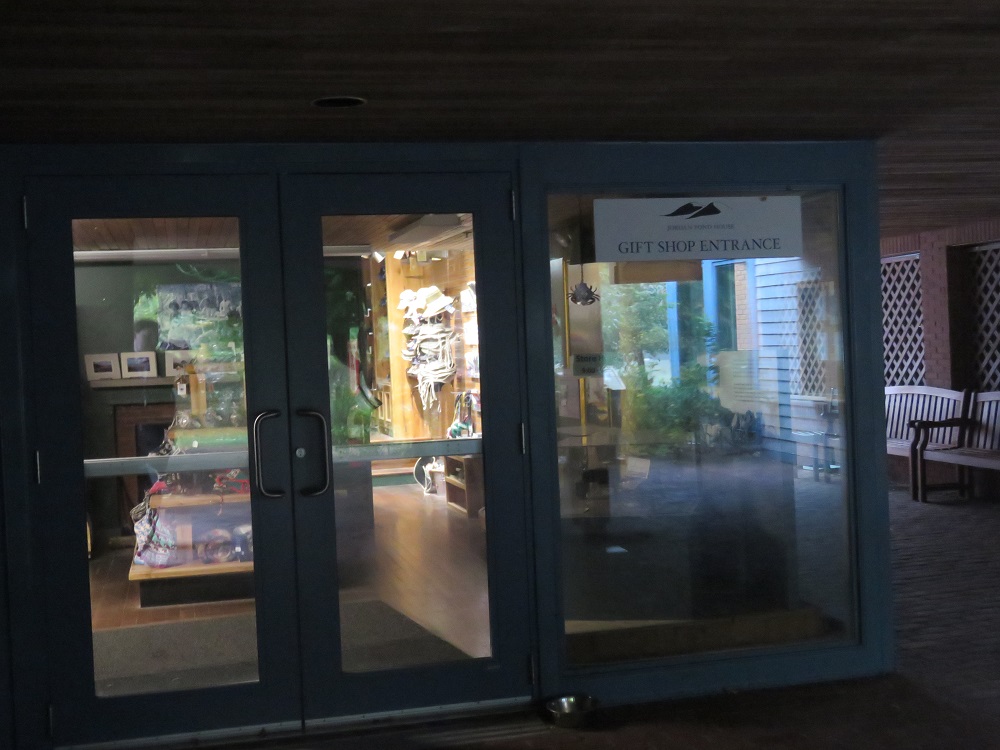 The gift shop has arts and crafts from local and regional artisans, gifts, local foods including jams for your homemade popovers, and a substantial selection of apparel and souvenirs.

It is one of three in popular places at Acadia attractions, which include gift shops at Cadillac Mountain and Thunder Hole.

The Pond House has a private upstairs dining room for groups of between 25 and 40 people, along with direct access to the observation deck overlooking Jordan Pond. It is available for private groups for special events or occasions.

Jordan Pond house is an excellent starting point for a walk on the Acadia carriage roads. The carriage roads were financed and directed by John D. Rockefeller, Jr. In the first half of the 20th Century, Rockefeller designed 57 miles of carriage roads on Mount Desert Island in Maine. 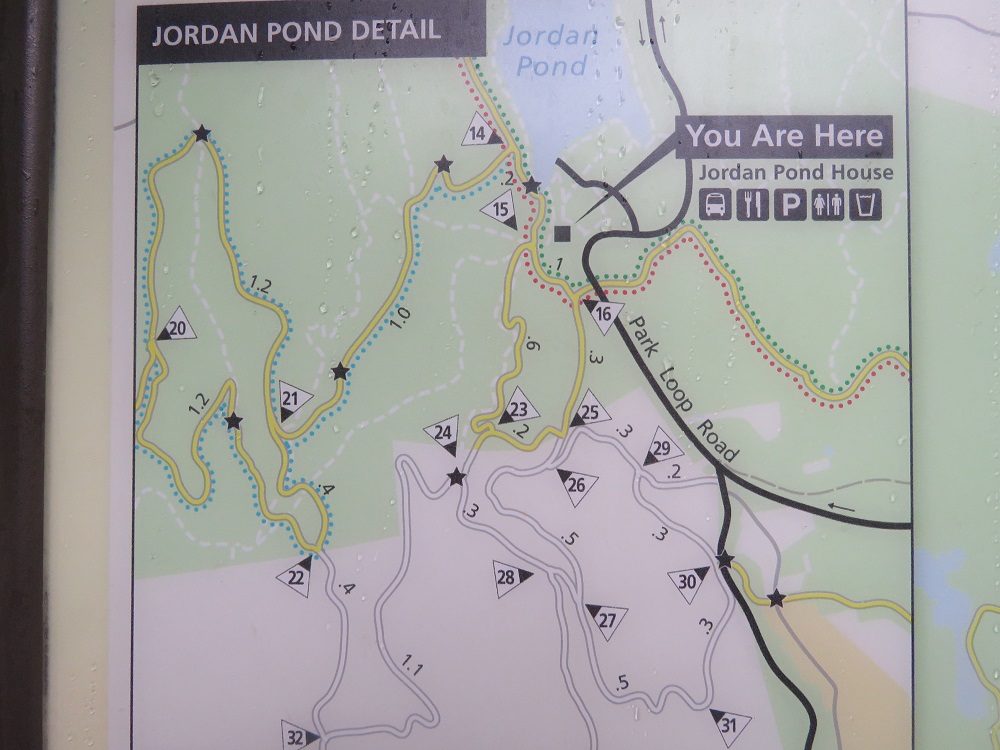